Captain Crunch french toast– is there any better cross between childhood and adulthood?

It’s no secret that Captain Crunch is one of the crunchiest cereals out there (RIP to the roof of your mouth), which makes it the ideal ingredient to add texture and crunch to french toast. You’ll make this Captain Crunch french toast just like any other french toast, except instead of cooking the french toast immediately after it’s dipped in the egg and milk mixture, it gets a visit to a pie pan filled with crushed up Captain Crunch.

This french toast is served with a vanilla icing. After testing several rounds of this recipe, we found traditional pancake syrup or maple syrup to be overpowering and not complementary to the subtle Captain Crunch flavor that not only was present, but that we actually wanted to taste. The vanilla icing is so easy to make, you could do it in your sleep.

1- Crush the Captain Crunch. The best way to do this is in a food processor but you can use a blender or even a ziplock bag with a mallet or the bottom of a sturdy glass jar. Crush the cereal until you have the consistency of panko and set in a pie dish.

2- Prep your stations. Combine the eggs, milk, heavy cream, vanilla, sugar, and salt until smooth and pour into a second pie dish. Preheat a large nonstick pan to medium-high heat or a griddle to 350°F. Set both of the prepped pie pans as close as you can to your cooking surface and you are ready to go.

3- Cook the Captain Crunch French Toast. Take each slice of bread and dip both sides in the egg mixture. Let any excess eggs drip off of the bread and transfer to the pie plate filled with crushed Captain Crunch. Using your hands, press the crushed cereal into all four surfaces of the bread until coated. Add 1 Tablespoon of butter to the nonstick pan, spread around, and place two (or however many pieces will fit) of the french toast on the hot surface. Cook until golden brown on both sides, and if you’re feeling extra ambitious you can cook the sides of the french toast as well. 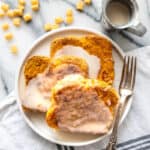