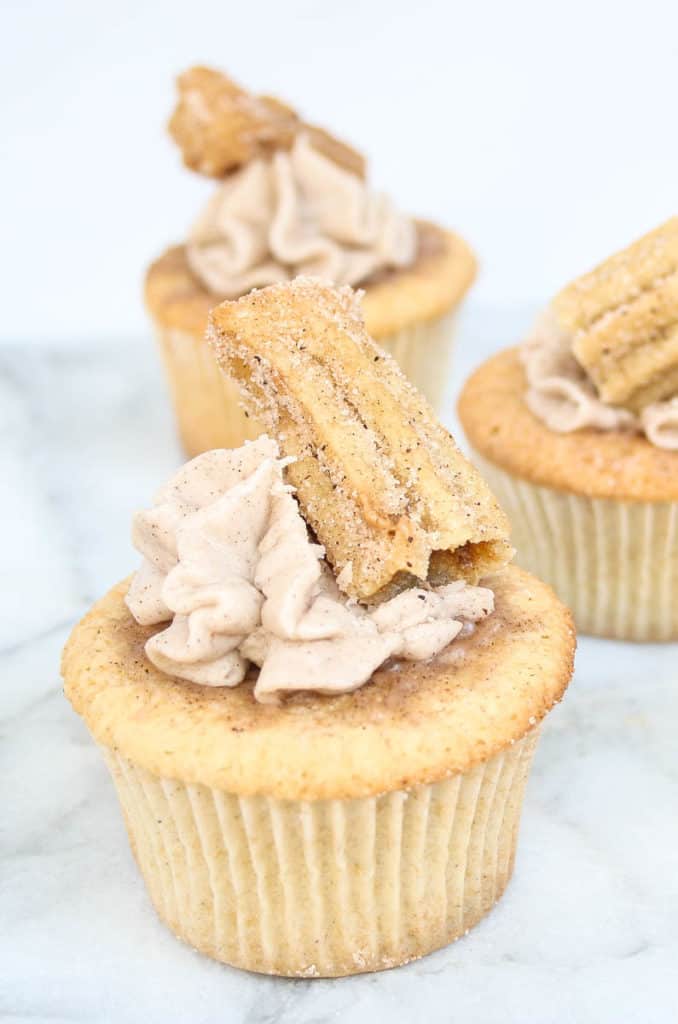 Pin It
I found myself trying to come up with an excuse to throw a fiesta, ok not really, no excuse has ever been needed. I honestly just wanted to make these Churro Cupcakes. Having El Bolillo Bakery in the area is the perfect place to find authentic Mexican pan dulce. Upon arrival, you will be greeted with walls of sweet breads, tortillas and Churros! The day I went, they had Dulce De Leche filled churros, yum! 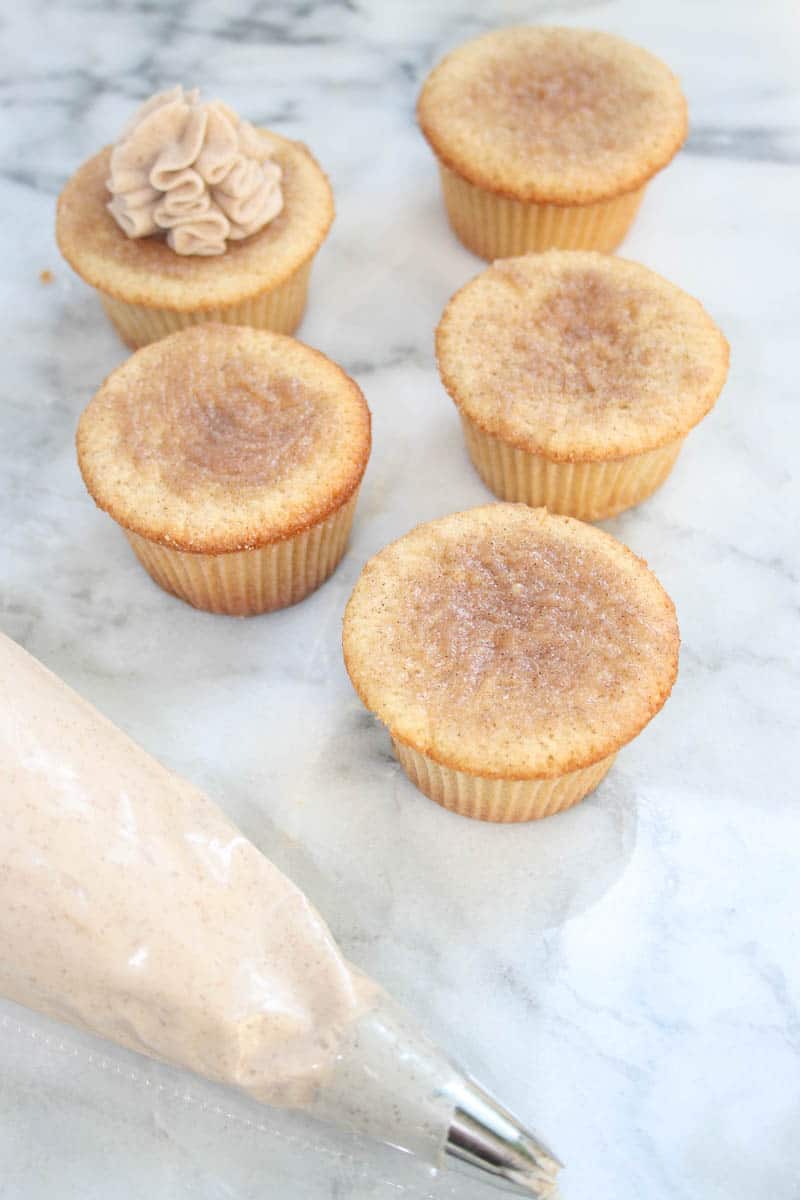 Pin It
I knew exactly what was to come of the Dulce de Leche filled Churros, thanks to the recent Better Homes and Garden magazine cupcake edition! I used my basic vanilla cupcake recipe in attempts to create the perfect churro cupcake. Nothing against BH&G, but I just thought I would add a special touch to an-already great idea. 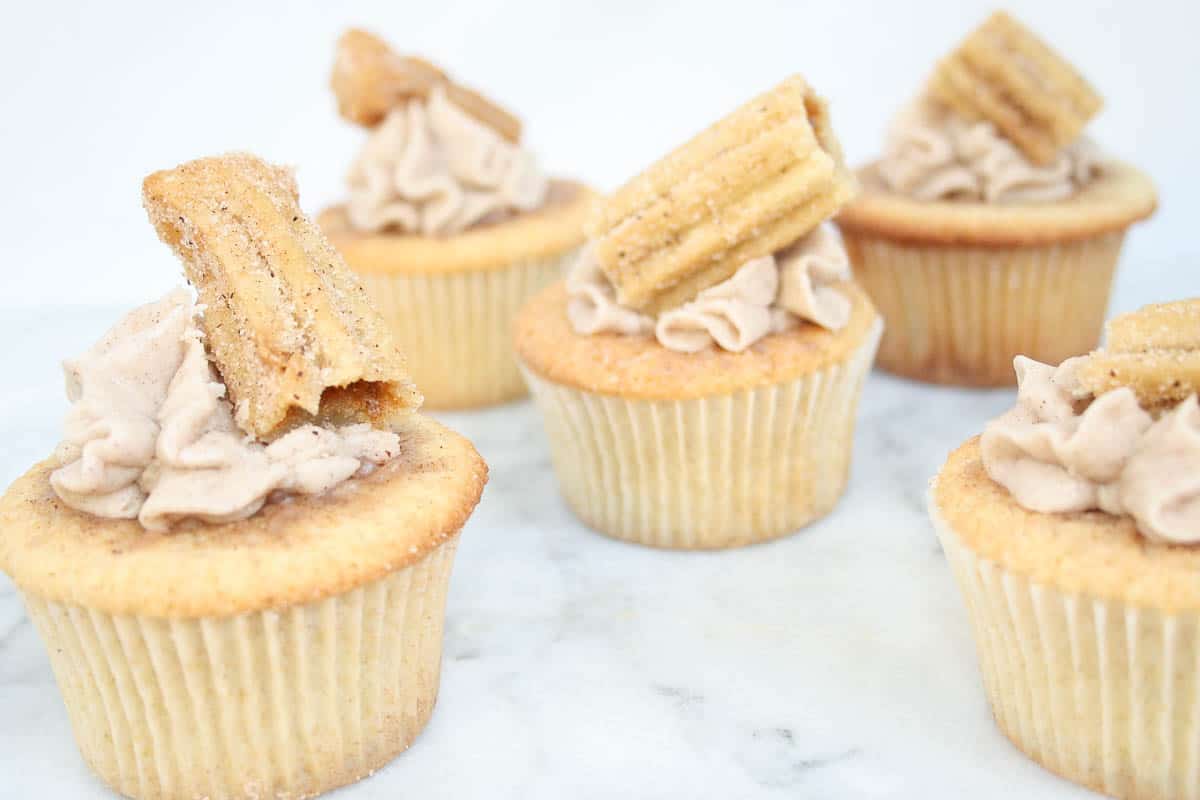 Pin It
My mother gave me a secret for moist, fluffy cupcakes a few years back. One, which I will always be forever grateful for, as are my friends! The trick… instant pudding! I personally don’t care for pudding, but when mixed into a batter of cupcakes, I could eat pudding everyday! 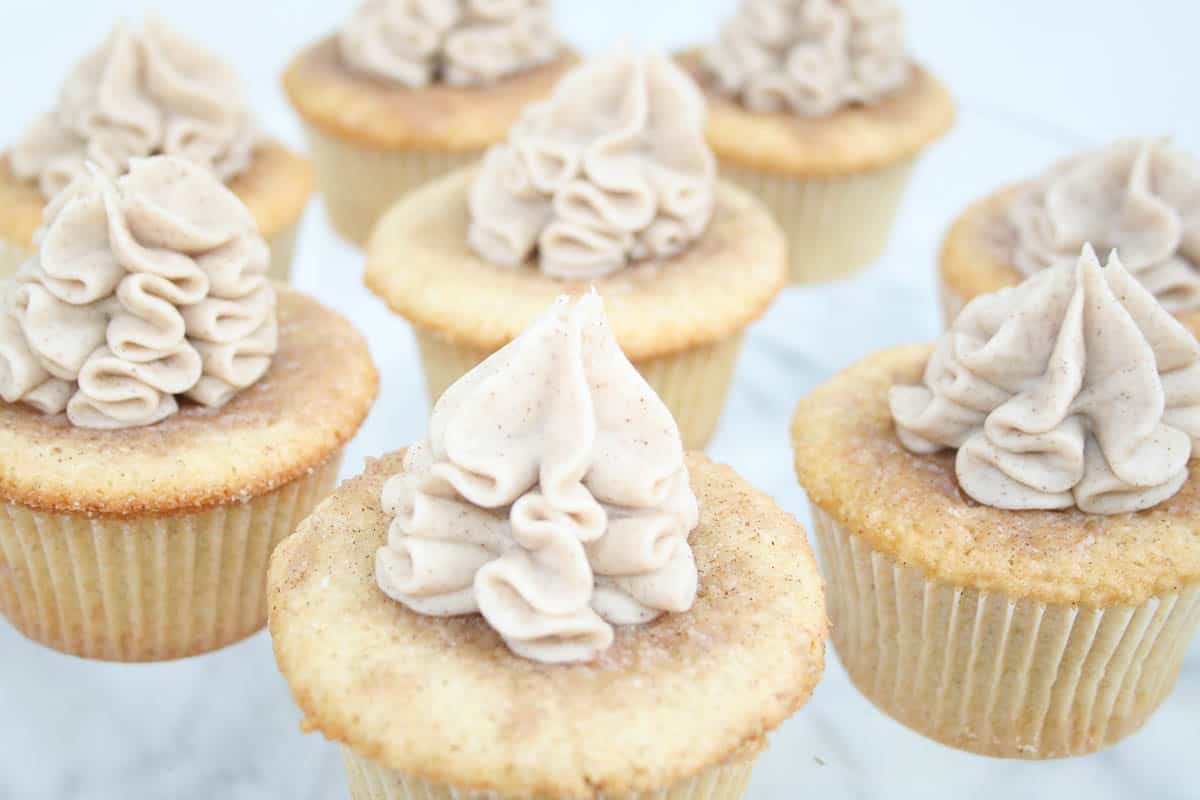 Pin It
I love anything with butter, cinnamon and sugar! Something about those flavors makes me feel warm and fuzzy inside. These cupcakes are topped with a cinnamon sugar topping that could also be used on toast, hot buttermilk biscuits, sugar cookies, or anything involving apples. Excuse me while I wipe the drool going down my chin. 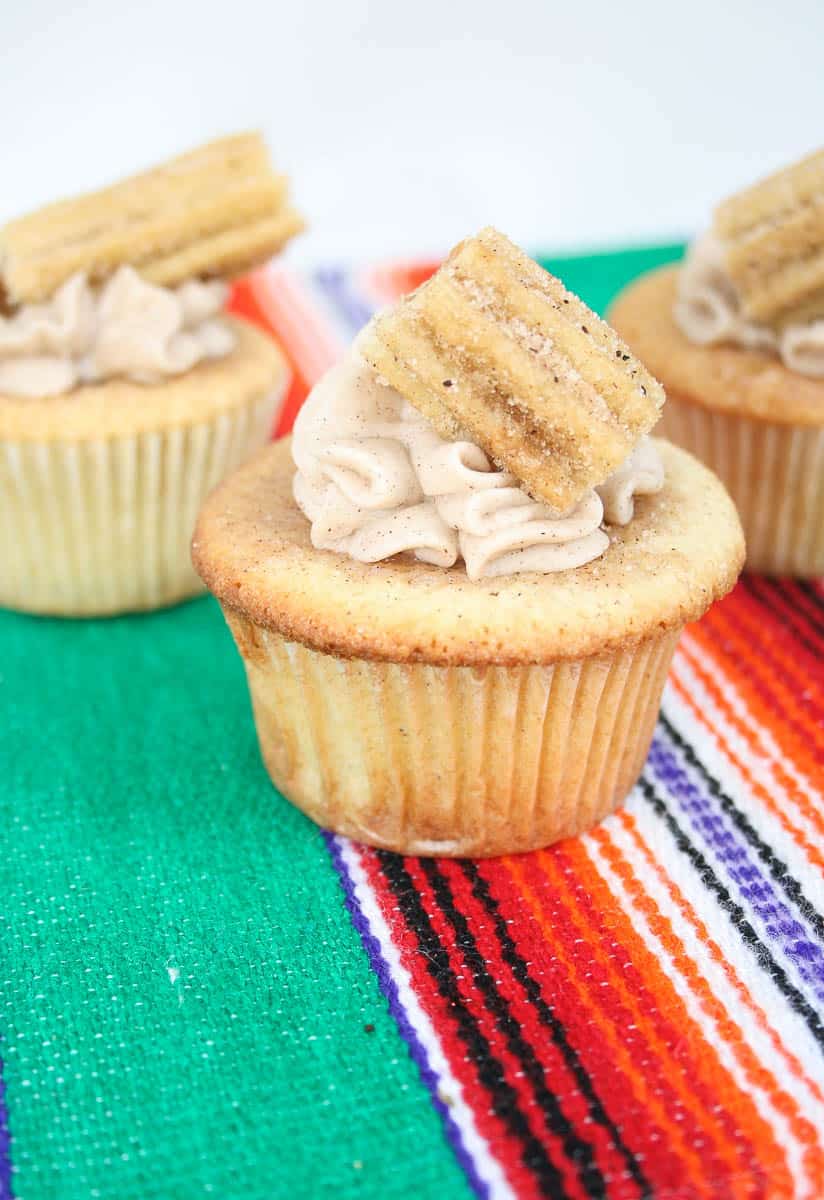 Pin It
These churro cupcakes will give you an excuse to throw a Fiesta, as if you needed one! 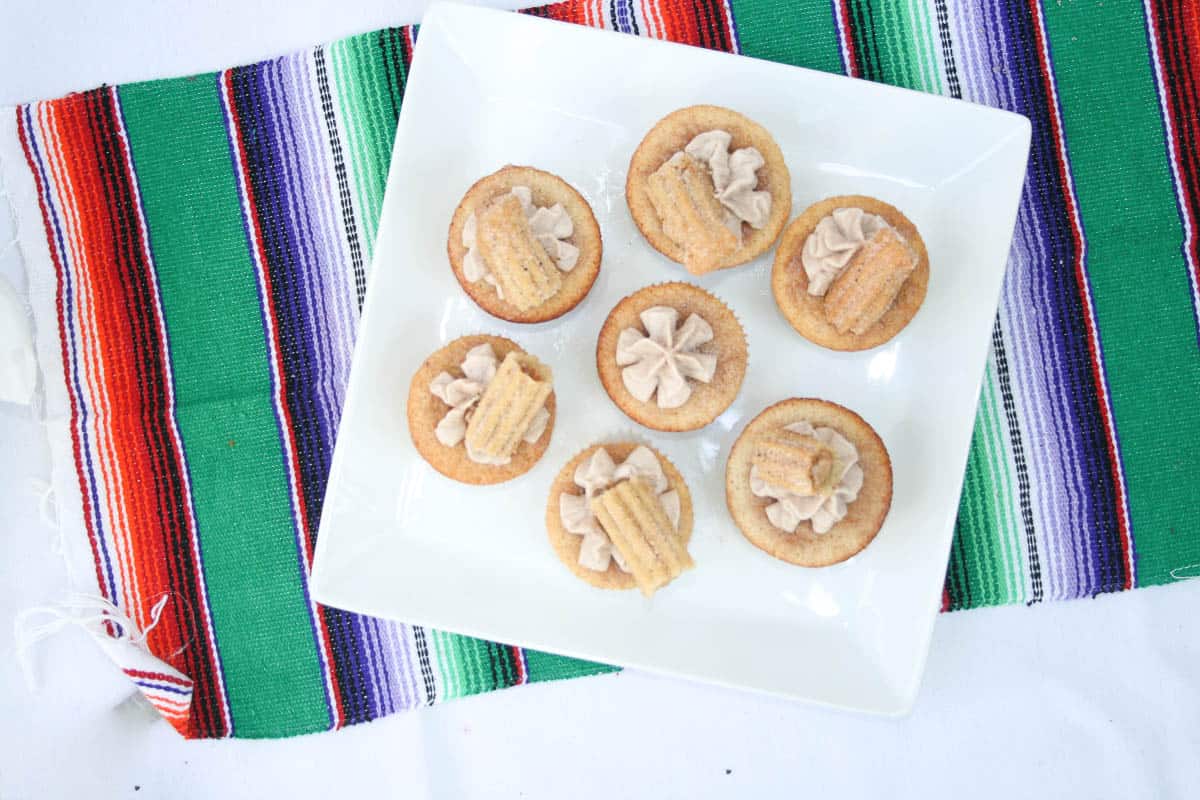 Explore the other 32 Related Posts

As the Female Foodie team and I decided to work on different dessert recipes this month with 10 ingredients or less, I immediately knew I’d be creating an easy, moist yellow cake with chocolate buttercream frosting. Simply put,…
Read the Post

When people ask me what me favorite food is, I like to say things like tomatoes, eggplant, kale, etc. But, really I’m thinking about fudgy, gooey, rich homemade brownies. From the batter to the crumbs, One Bowl Brownies are as yummy…
Read the Post

Peaches and Cream with Cookie Crumble has quickly become a family favorite in just a few short weeks. Where has this been all my life?! The first step you have to take is to call my dad and ask him if…
Read the Post

5 Ingredient Cake Batter Dip is the answer to all your childhood woes.  There was truly nothing better than licking the spoon after mixing together a birthday cake.  But for all kinds of reasons, Mom never allowed you to…
Read the Post

There are a few questions everyone gets asked when they are with someone who is trying to get to know them. The same questions get asked as ice-breakers, in silly games, and just in life in general. We all…
Read the Post

The land of the Midwest can be a strange sight for food. With traditional fare such as lutefisk (cod soaked in lye), rommegrot (sour cream porridge), lefse (think potato tortillas), and snickers salad (yes, a salad with candy bars – and…
Read the Post

Say hello to a little bit of fall just for your mouth! This one-bowl apple crisp is seriously to die for! Now don’t get me wrong, I love apple pie a lot, but after I stuck a bite of this…
Read the Post

I grew up in a family that LOVES birthdays. Seriously. Even on school days, my brothers and I always got breakfast in bed, followed by some kind of a sweet treat at school that our mom would ‘surprise’ us with and…
Read the Post

This cake is AMAZING! No exaggeration at all. My family makes this cake at least once a week, and it’s always gone by the next morning! It is so delicious and moist and just the best thing in the…
Read the Post

If there is one dessert that screams “Summer”, it has to be s’mores, right? I’m sure just reading that word, you were able to picture one memory you have of sitting by the open flames, surrounded by family or friends,…
Read the Post

Lately I’ve been obsessed with tea. It might have something to do with me binge watching shows like Downton Abbey or The Paradise but who knows. English tea parties always seem so elegant and fancy. I’m living the mom life…
Read the Post

Let’s talk about bitters.  Bitters have long and storied history dating back hundreds of years.  The short explanation is that bitters are extracts of roots, barks, vegetables, herbs, fruits – pretty much anything can be turned into bitters.  Most of…
Read the Post

There isn’t much that I love more than a beautiful mason jar dessert, but mini mason jar desserts definitely make the list. Confession time. I’m of the belief that all things mini tend to be more adorable, mason jars included.…
Read the Post

Confession time… I ate an ENTIRE 9×13 pan of these the other night. And even worse, I made them again the next day! Like: OH MY GOODNESS! I’m going to have to run a marathon to get rid of all those…
Read the Post

Anyone who knows me knows how much I love tea time. Confession: Whether I’m at work or enjoying a slow Sunday at home, I love taking the time to brew a cup of tea. It’s a great way to be…
Read the Post
More Posts
Load More Posts