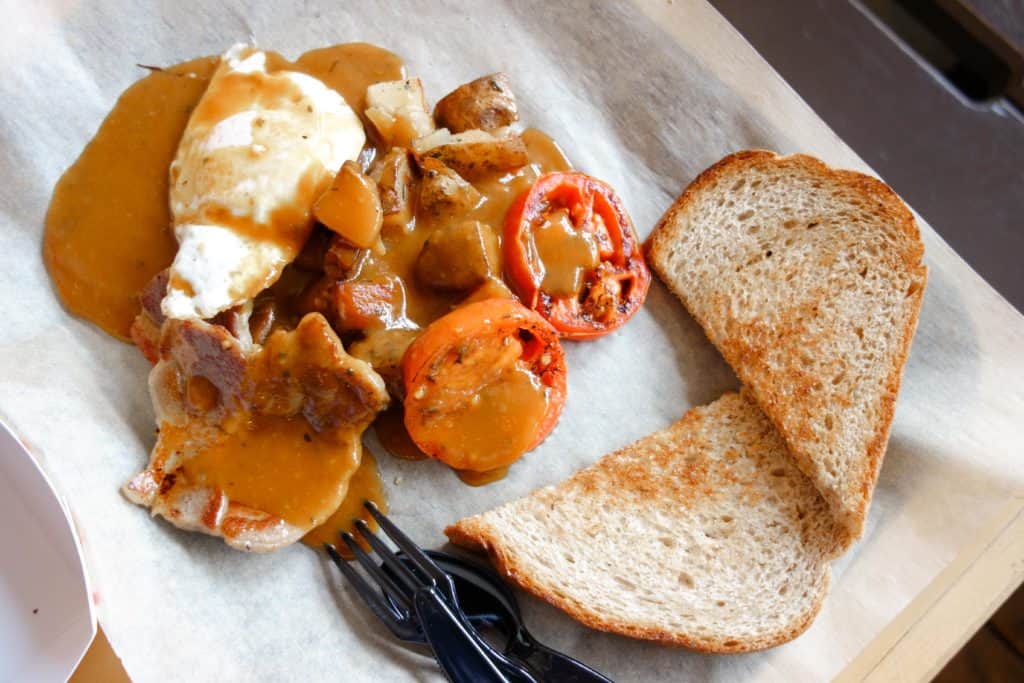 Pin It
“Make it, and make it better than the guy down the street.”  This is the humble philosophy of Noble Sandwich Co.  But don’t be fooled by this restaurant’s humble appearance.  The vintage pendants and hand-written, chalk menu boards with shelves of house-made pickles are supposed to be welcoming and it prepares you for the a no-frills, all business kind of meal.  The space is airy and bright with communal tables and a quaint porch in the back of the restaurant. 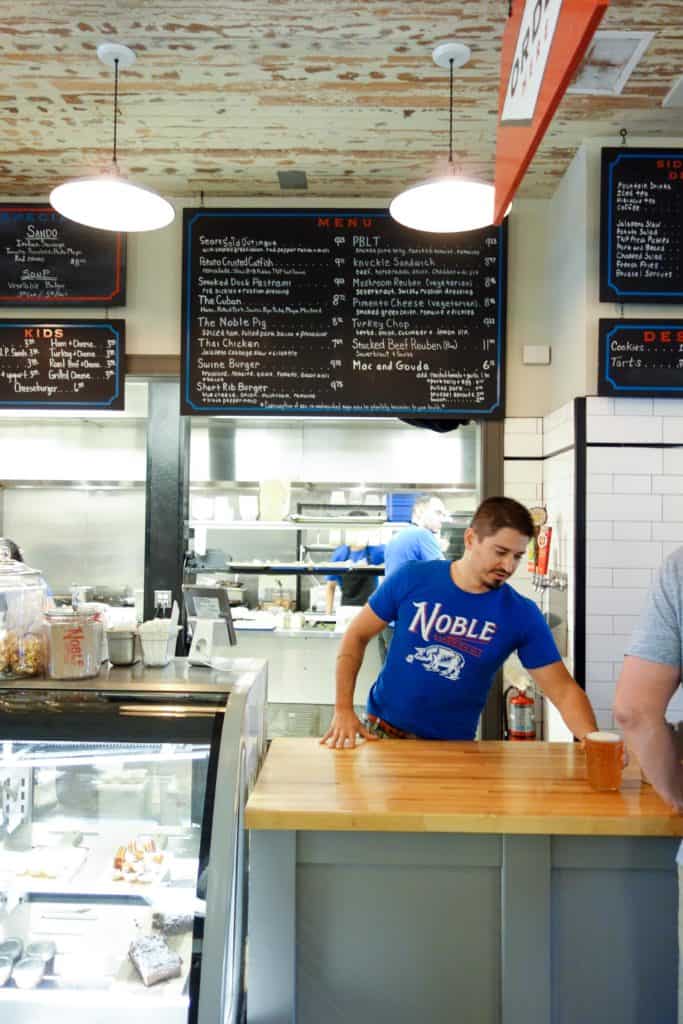 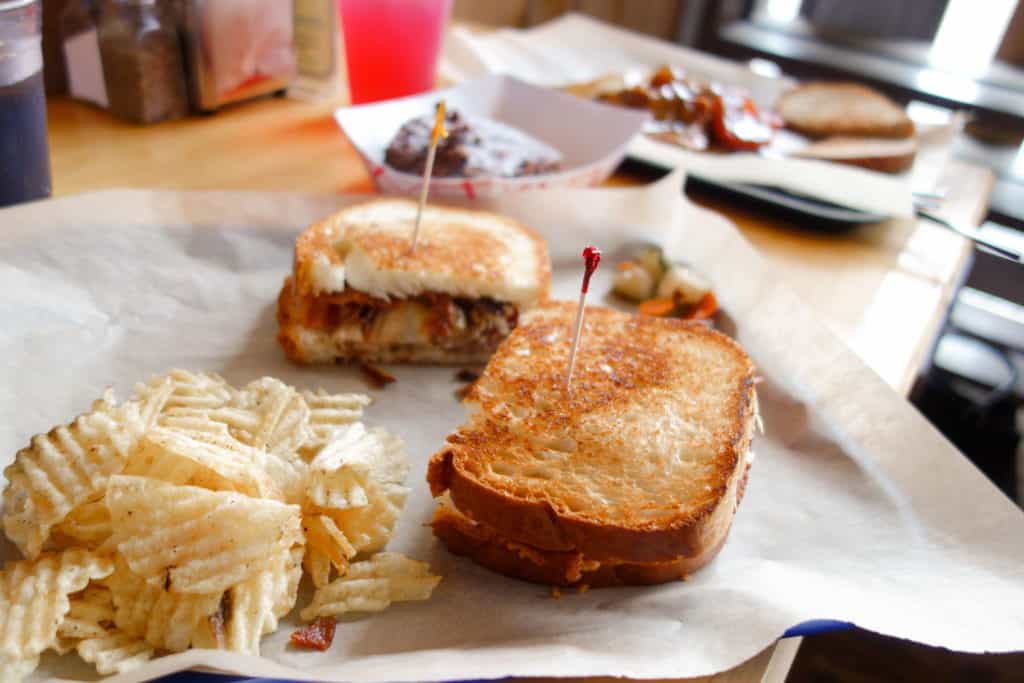 Pin It
Of course we had to get the Noble Pig sandwich.  This sandwich has spicy ham, bacon AND pulled pork. (Because one type of pork is just unacceptable.) To accent all this pork, there is a nicely aged provolone, spicy mustard and mayo.  On the side were perfectly salted and peppered chips and their house-made pickles.  Noble Sandwich Co has shelves and shelves of these pickles because they sell like crazy.  I typically have a jar in my fridge and eat straight out of the jar.  #nojudgement 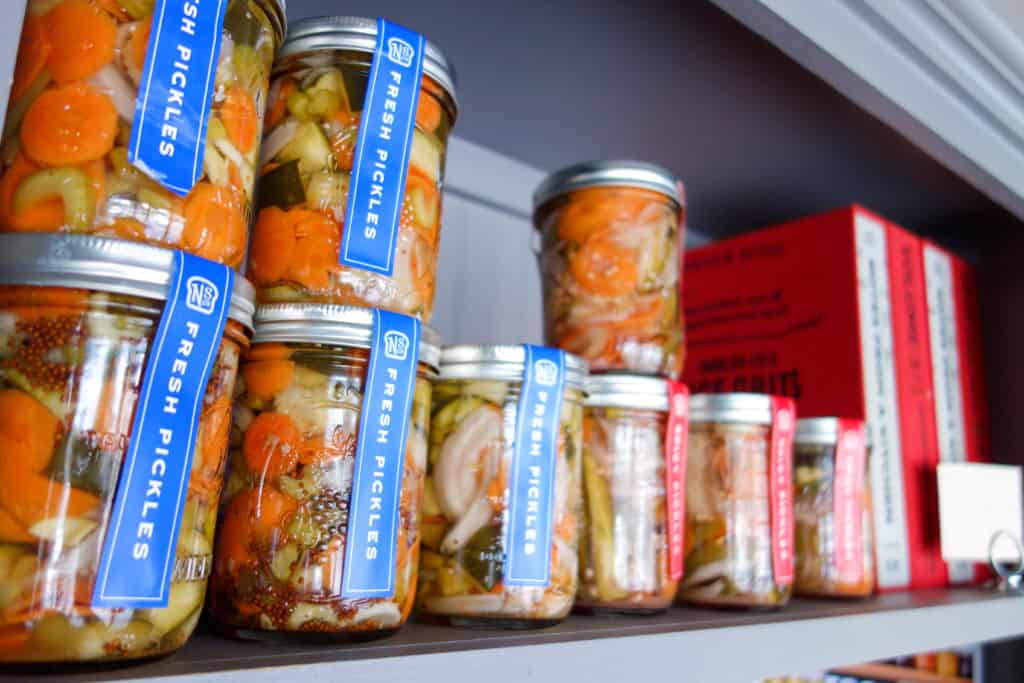 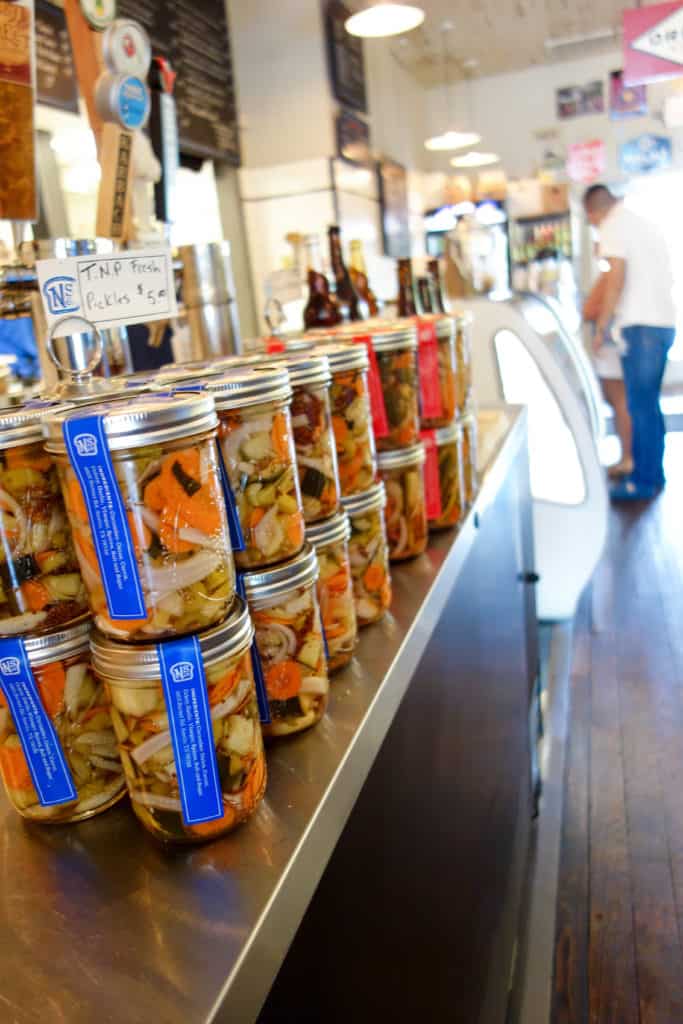 Pin It
Next for lunch was a special; house cured ham steak with potato hash, grilled tomatoes, red eye gravy and a fried egg. OMG this was amazing.  Just look at that gravy!  In case you’re wondering what red eye gravy is, it’s a Southern bit of cuisine that use the morning’s leftover coffee.  Coffee has a wonderful bitter and acidic taste that highlight the ham steak perfectly.  Even the toast was made in Noble Sandwich Co.’s kitchen!  By the way, they don’t ask you how you want your egg done because there is only one right way to have an egg – runny yolk. #judgement 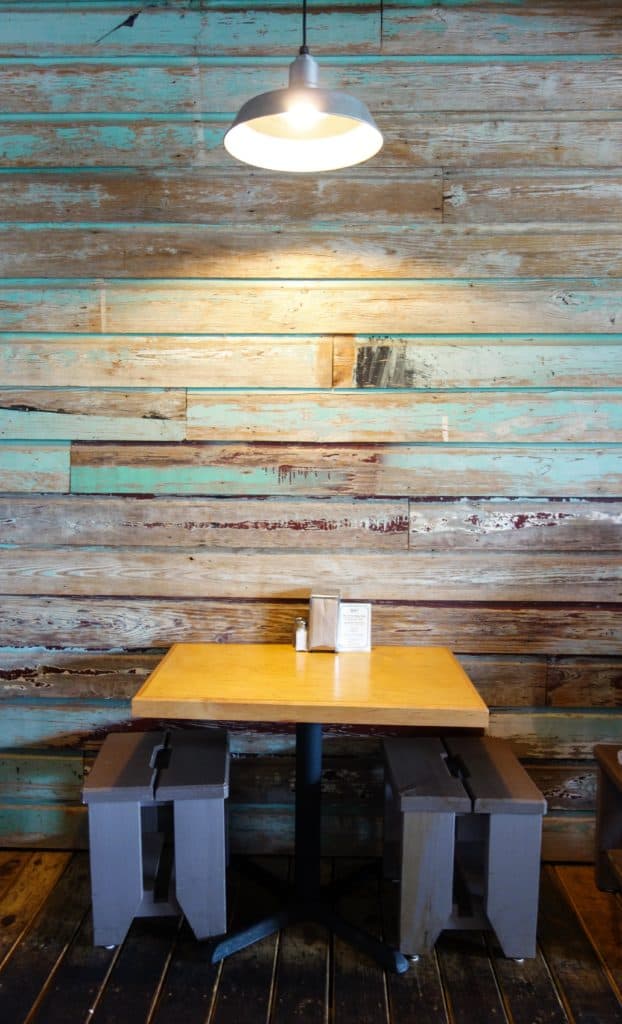 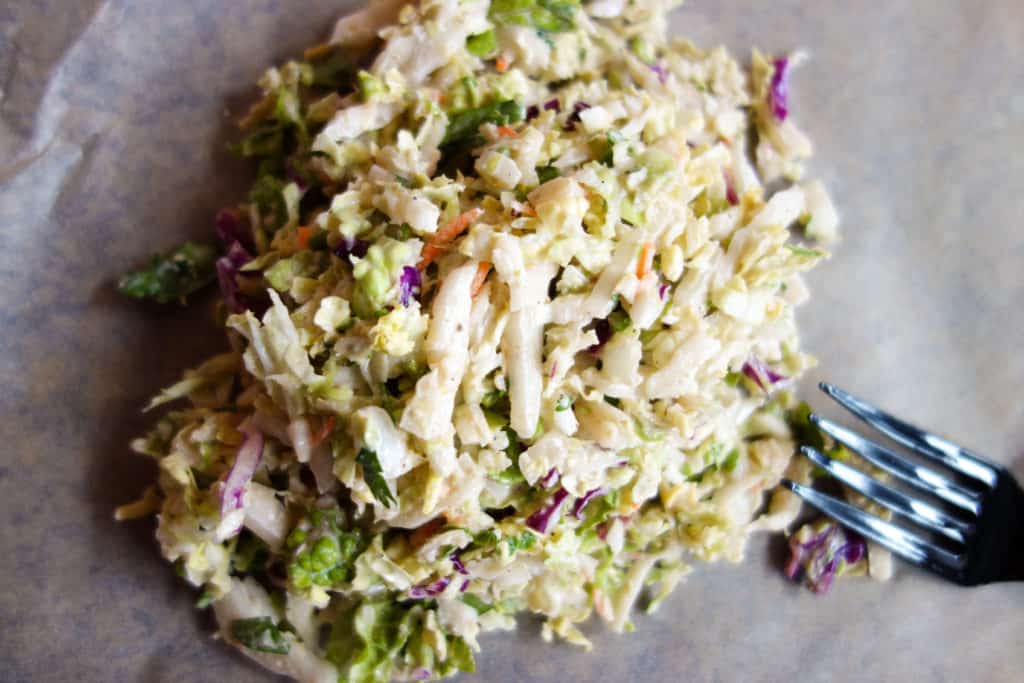 Pin It
On the side was a delicious, fresh and insanely hot jalapeno coleslaw.  We ate through the pain because we’re Texans and we think we’re pretty tough.  This coleslaw is especially refreshing during the summer and the post-heat endorphins were so worth it. 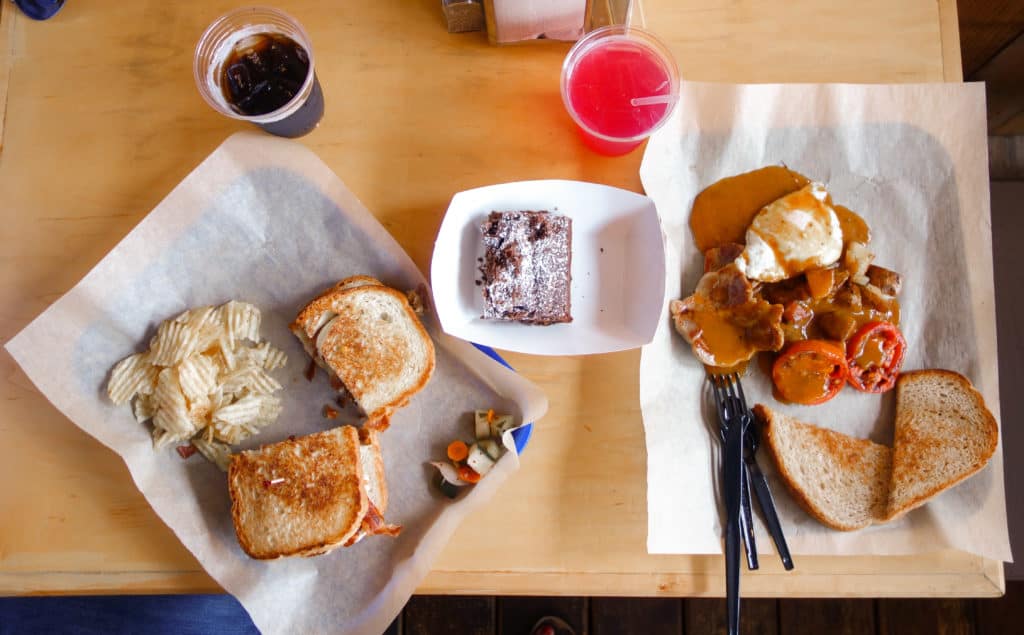 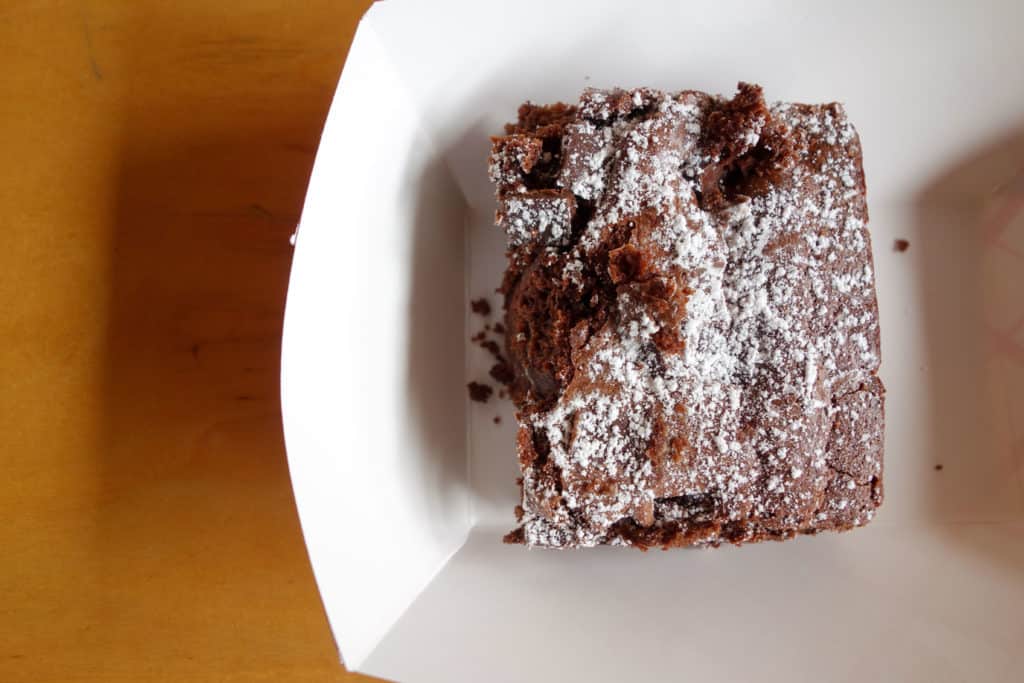 Pin It
Lastly, we had dessert.  The first dessert was a huge slice of brownie that was perfectly cakey and moist.  An apropos end to a heavy and rich meal.  The next dessert, because we’re masochists, was a heavenly combination of freshly baked banana and cherry breads, filled with a Swiss meringue buttercream and candied almonds.  This was my absolute favorite part of the meal.  Completely blew my mind with how superbly light and flavorful this dessert was.  Unfortunately, like most of the desserts, these are part of Noble Sandwich Co.’s daily specials and aren’t part of the regular menu.  That mean’s you’ll have to go often, if you want one of these sweet treats. #notpregnantjustdessert 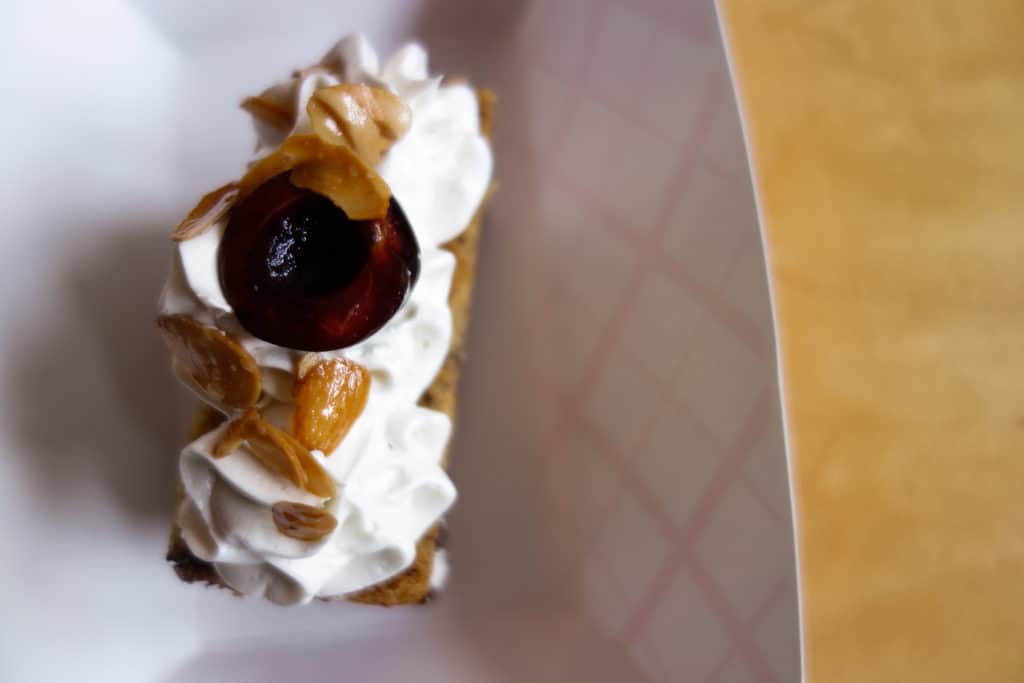 10 Spots For The Best Tex-Mex in Austin

Explore the other 61 Related Posts

A guide to the absolute best San Antonio restaurants, written by locals, with recommendations from barbecue to burgers to pizza!

The Best Austin Restaurants: 20 Picks for 2020 Welcome to our special guide to the absolute best Austin restaurants. It only takes a day or two in this capital city to realize that it’s nothing short of a foodie…
Read the Post

The best Riverwalk Restaurants in San Antonio As one of the most the most iconic spots in the city, and possibly the state, the riverwalk sees millions of people a year. It binds old downtown charm with the beautiful missions of…
Read the Post

Oh hey there- time to share a comprehensive list of the absolute best breakfast and brunch spots in Austin. Austin is swarming with dozens (and dozens) of fantastic breakfast options from pancakes to breakfast tacos to biscuits and gravy,…
Read the Post

The Ultimate Guide to Eating At Franklin Bbq in Austin

Earlier this month, after living in Austin for not quite a year, Cody and I decided to brave the long lines and spend the better part of our day waiting in line so we could enjoy what many to believe…
Read the Post

If you’ve ever discussed the food scene in Austin, Texas at any point in time, then you know it is absolutely exploding with amazing places to eat- both old and new. And with the exception of a few food genres…
Read the Post

When I say that I’m addicted to sugar I’m dead dog serious. It’s hard for me to finish any meal without something sweet and after moving to the capital of Texas last year I took it upon myself to…
Read the Post

Welcome to a foodie’s guide to the absolute best tacos in Austin, Texas. This is literally my life’s work months and months of happily devouring tacos in what some consider to be the taco capital of the nation. Before…
Read the Post

The 15 Best Burgers in Austin

The Best Burgers in Austin I’m absolutely giddy to share this post on the best burgers in Austin. In short, Austin is a sea of great restaurants, *several* of which have fantastic burgers. Last fall after moving to Austin…
Read the Post

Welcome to our complete guide to the best breakfast & brunch spots in San Antonio. Compiled by three trusted San Antionio foodies, this list is a diverse, well-loved collection of places that every San Antonio foodie needs to try.…
Read the Post

When Cody and I relocated to Austin last fall and decided to tackle the foodie scene headfirst, we hit the ground running and started with our favorite food group, pizza. And let me tell you there is a LOT…
Read the Post

I’m not sure if I’m on a burger kick recently or if I’m just gravitating to places that have huge open areas so I relax a little more when eating with my littles around. Probably a bit of both…
Read the Post

Rainy days, colder weather, and the need for noodles – they go hand in hand right? When the temps {finally} drop in sunny San An (not so often), I need no other excuse to head down to Tenko Ramen…
Read the Post

When I was in college I was always on the lookout for quality eats that fit into my broke college girl budget. I may have graduated a few years ago, but luckily one of my favorite spots is still just…
Read the Post

The search for healthy fast food is over! Start is committed to providing “Real Food Fast”, and I am here to testify, they live up to that mantra. I couldn’t be more excited to share this place with y’all,…
Read the Post
More Posts
Load More Posts