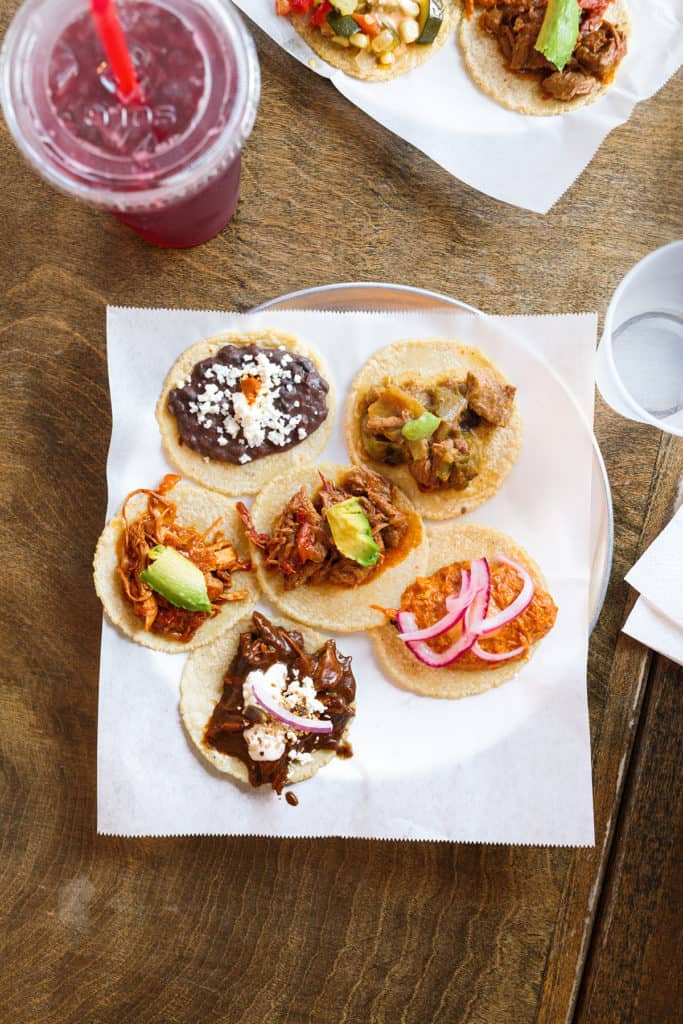 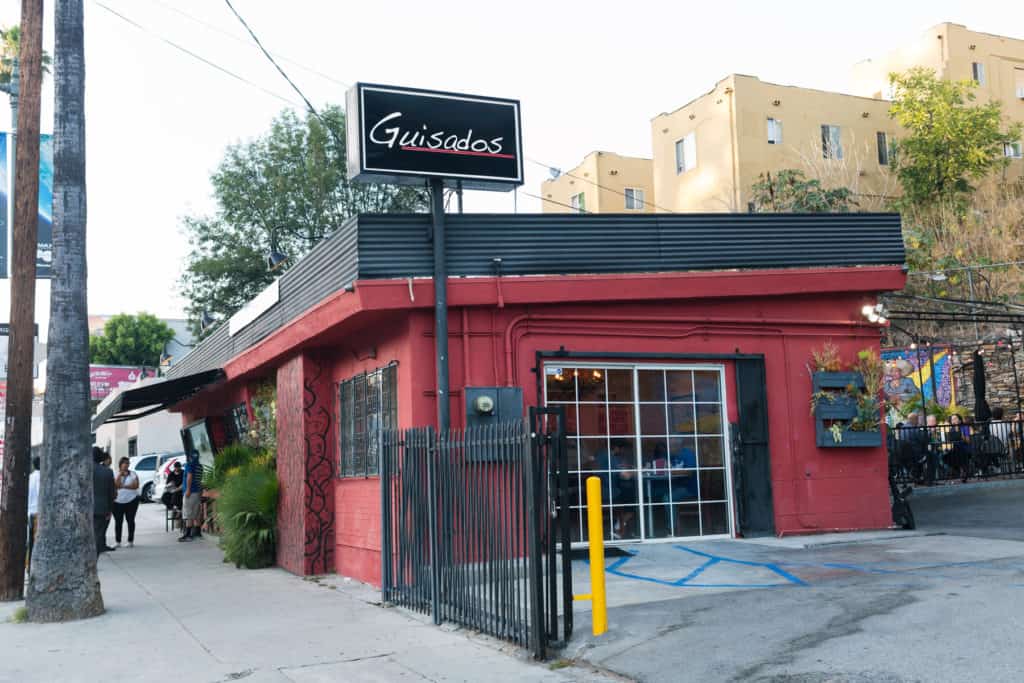 Living in LA, a good go-to taco spot is a must. Cheap, tasty, fresh and fast are a pre-requisite, and Guisados is all of those, while staying true to it’s roots of simplicity & authenticity. They started with one location in Boyle Heights, and have now expanded to four locations, in DTLA, Echo Park, and most recently, West Hollywood.

We chose to visit their Echo Park location, where a line can often be seen out the door, but parking wasn’t too much of an issue- they have an off-street lot at the restaurant, and then a second off street lot just a few steps away, or plenty of street parking nearby as well. They have a big outdoor patio behind the building, and a few tables indoors as well. You can watch their cooks making orders in the kitchen as you stand in the fast moving line – making fresh corn tortillas from ground masa, putting the finishing touches of pickled onions or avocados atop the tacos. 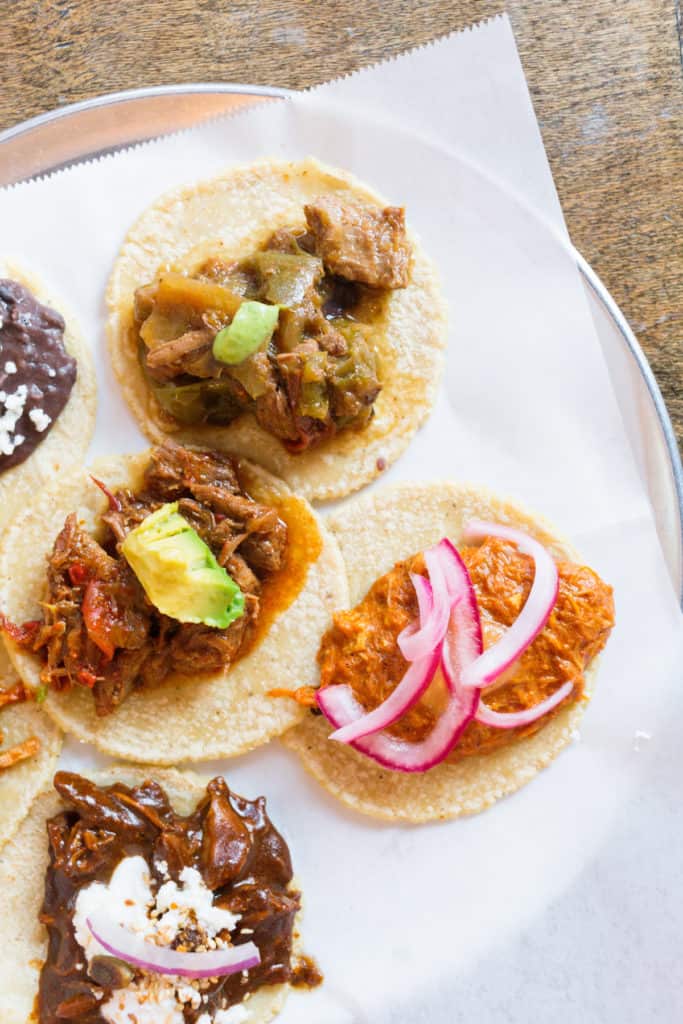 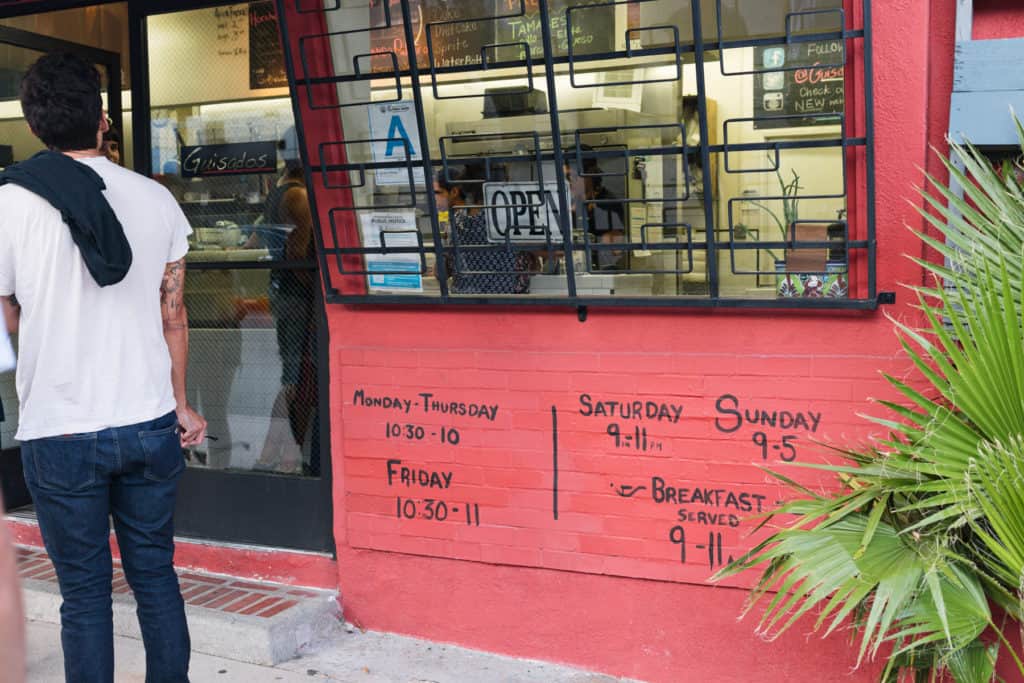 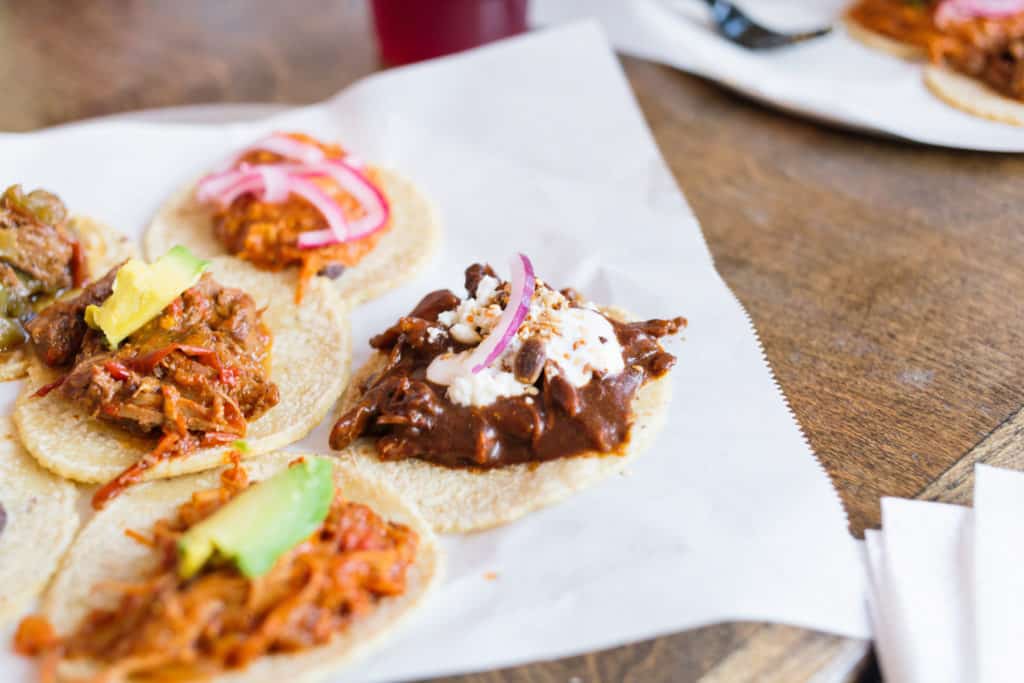 Pin It
Their menu is pretty straightforward, consisting of 14 different taco flavors, a cheese quesadilla with the option of adding chorizo, and a variety of soda and juice drinks (and Horchata of course).  It’s pretty hard to limit yourself to just two or three taco selections from the menu, so I’d recommend going with their 6 taco sampler plate, made up of their six most popular tacos. They might look small, but they are filling! And if you don’t like the 6 tacos that it’s usually made up of, you can sub a few out for other offerings from the menu.  On weekends they have breakfast tacos (!!), 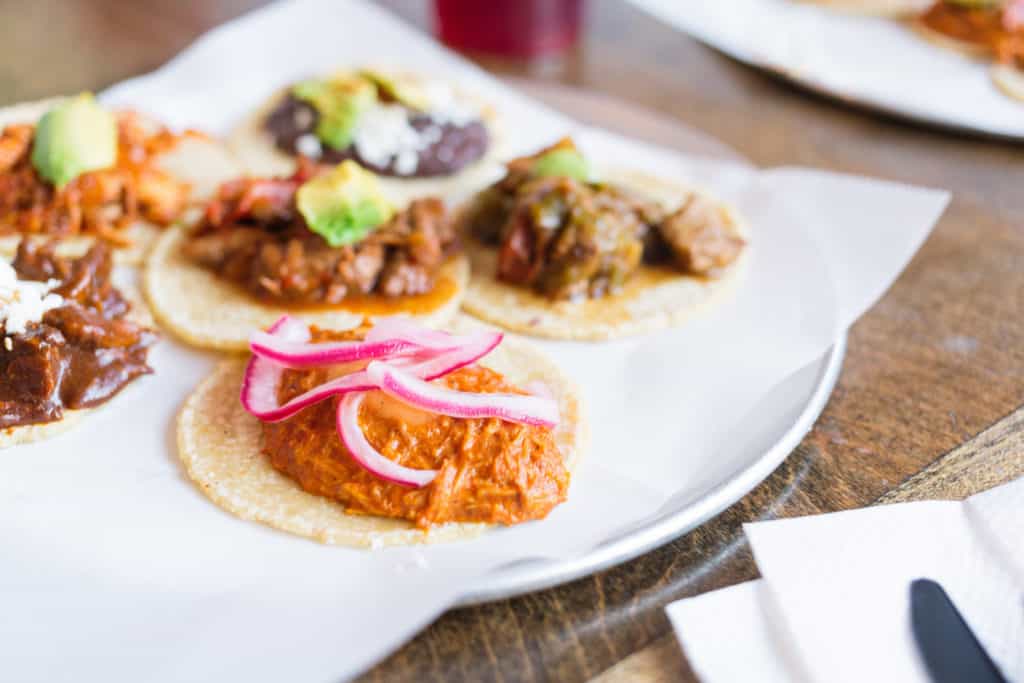 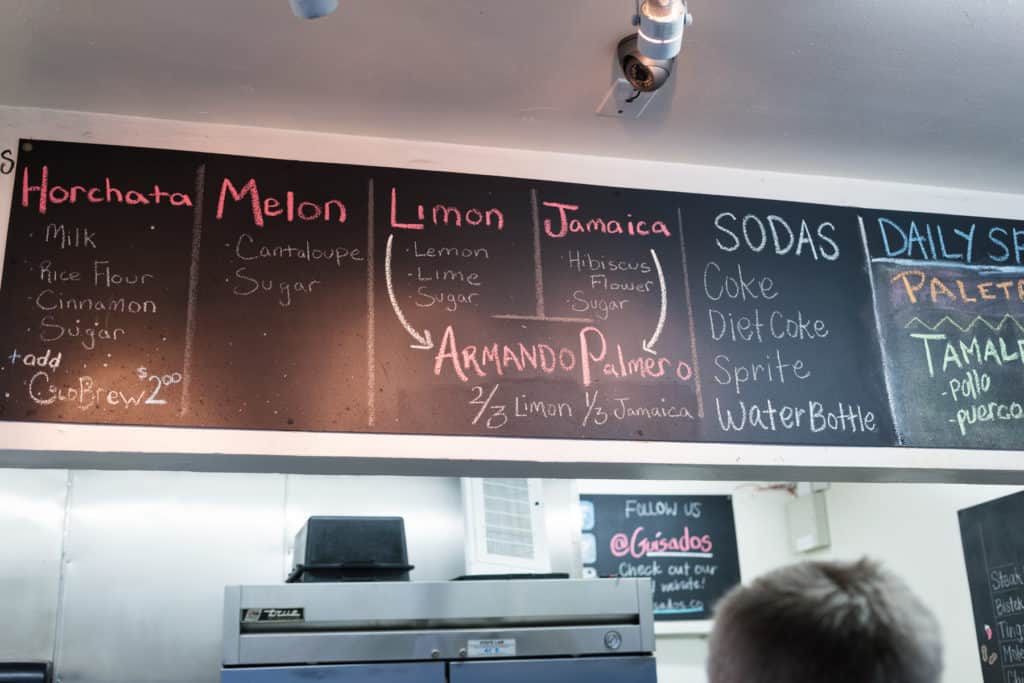 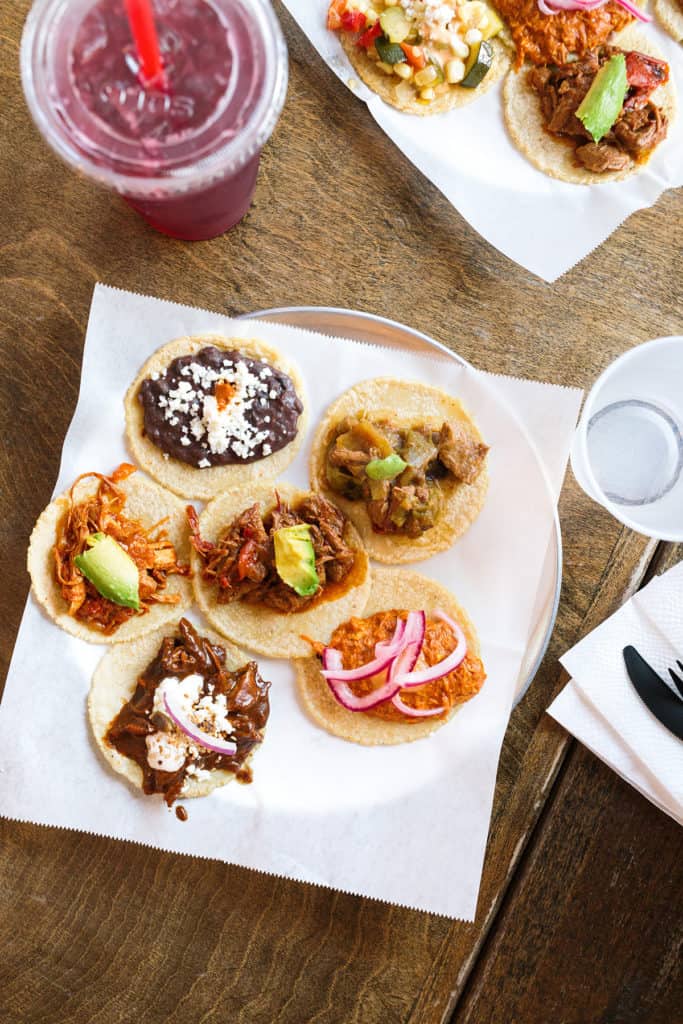 Pin It
I decided to go with the Six Taco Sampler, and subbed out my Steak Picado taco for a frijoles con queso but stayed with the usuals for the rest- Cochinita Pibil, Mole Poblano, Tinga de Pollo, Bistek en Salsa Roja, and Chicharron. My husband also ordered the sampler, and subbed out one of his tacos for another veg option, the Calabacitas (which he said was his favorite!).

Each taco was so different from the rest but just as good down to the last flavor-packed bite. My favorite of the six I got was the Mole Poblano, which is shredded chicken breast in a nutty poblano style Mole, served with sour cream, queso fresco, red onion and dried chile. Yum! If you’re not a fan of spiciness, I’d recommend subbing out the Cochinita Pibil, it left my mouth & lips on fire! I’ve also heard the Steak Picado is pretty spicy too. 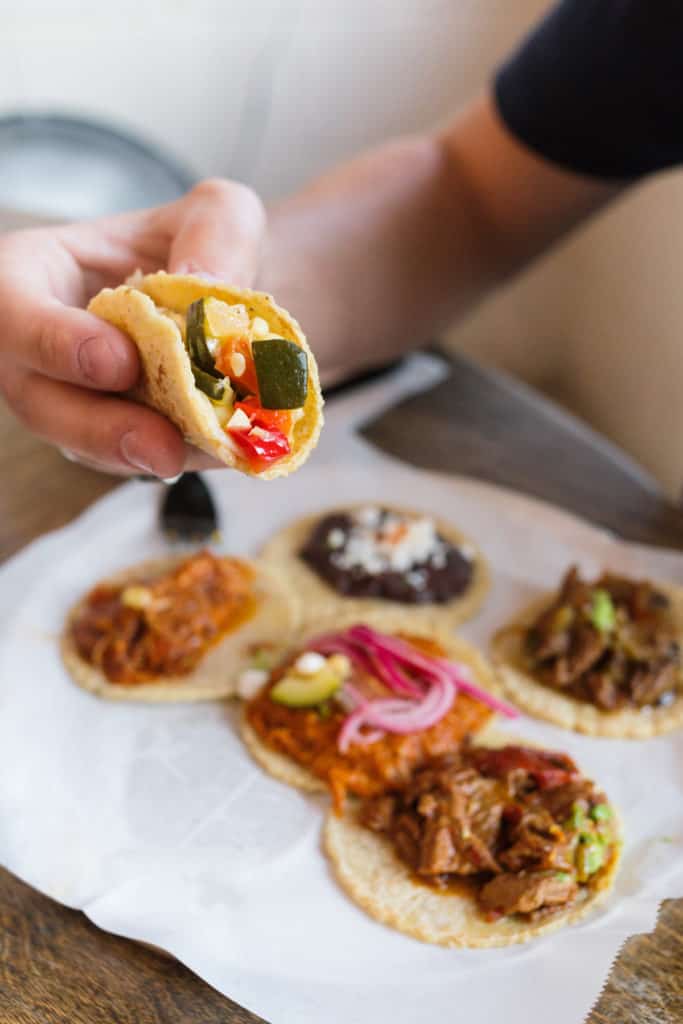 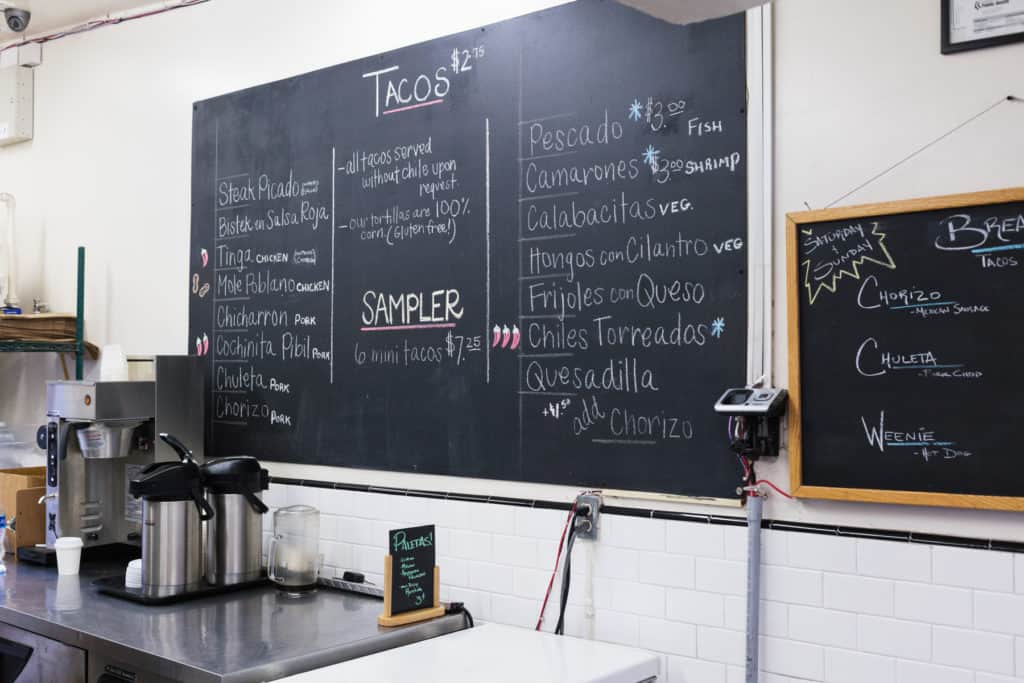 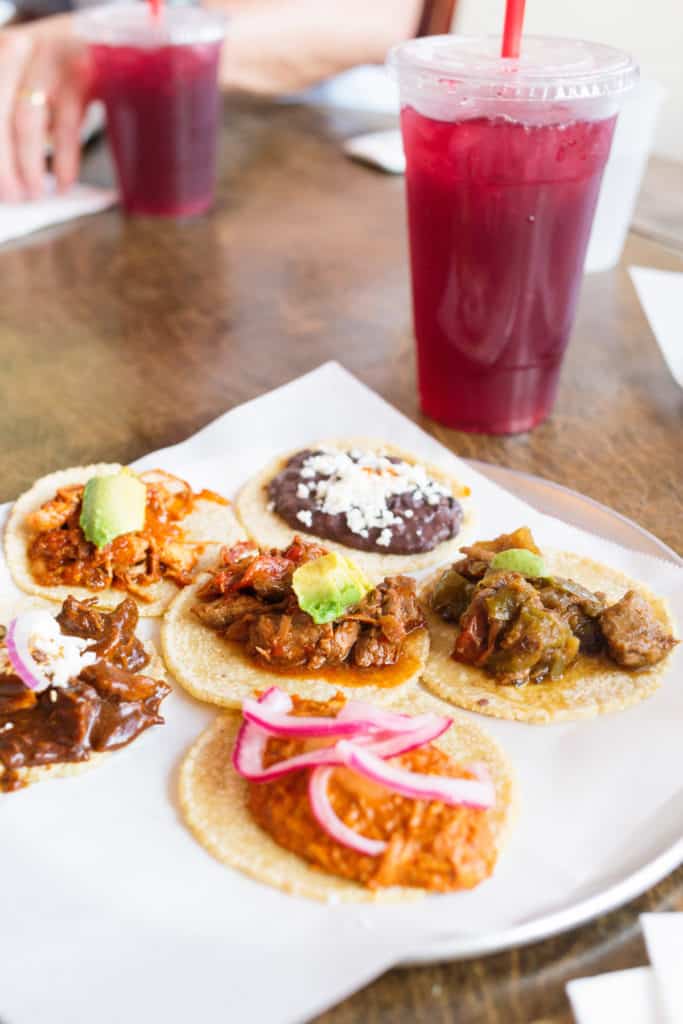 Pin It
We also ordered the Armando Palmero to drink, which is 2/3 Limon (Lemon, Lime, Sugar, Water) and 1/3 Jamaica (Hibiscus Flower, Sugar, Water). It was super tasty and refreshing, but next time I’d try ordering their Horchata to help cool down my mouth after that Cochinita Pibil! With the Six Taco Sampler costing only $7.25 and drinks for $2, Guisados makes a great option for some of the tastiest tacos that LA has to offer. 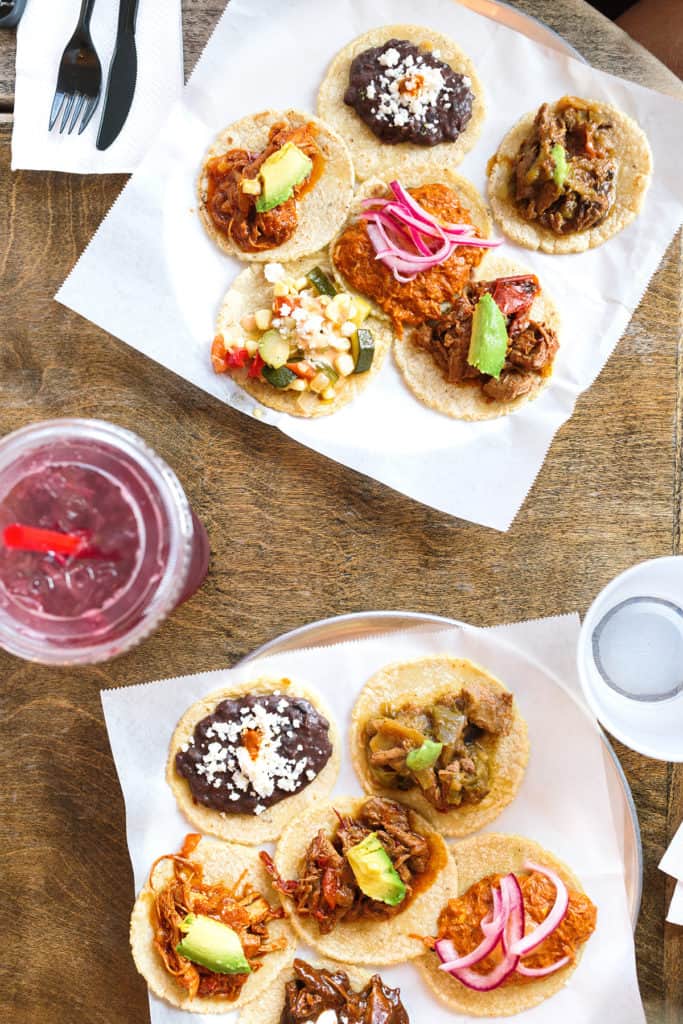