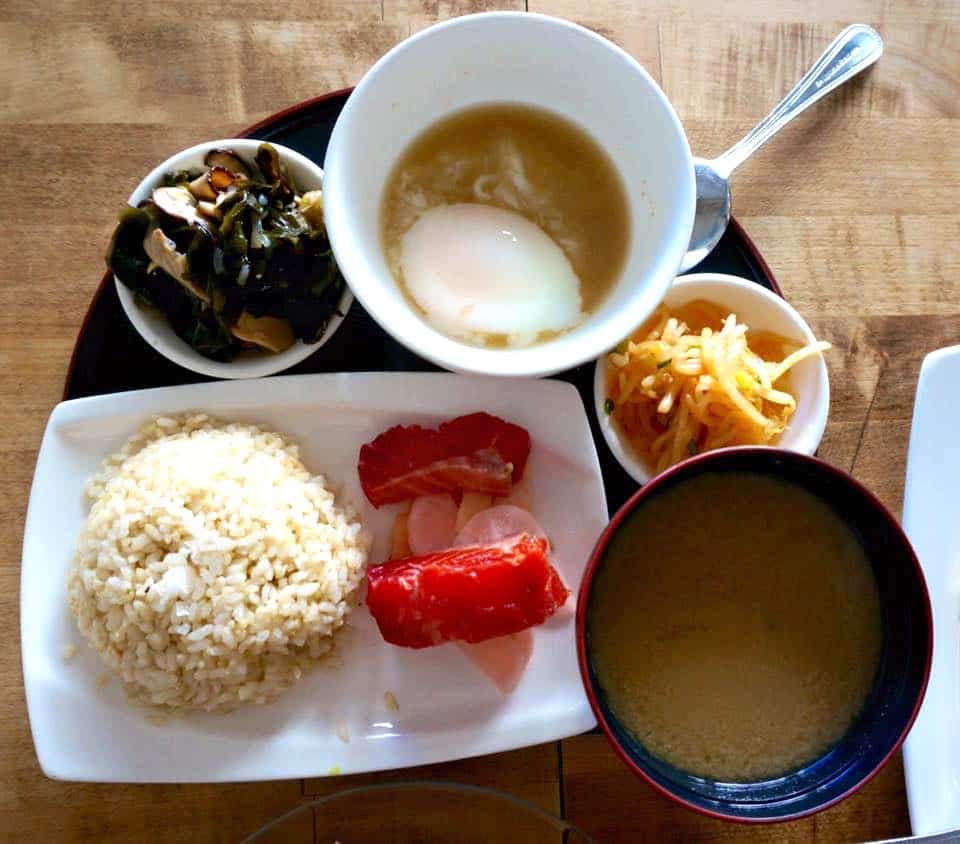 Pin It
Cassava in the Outer Richmond is one of my favorite brunch spots in the city. The owners are husband and wife Kris Toliao and Yuka Ioroi. Chef Toliao previously cooked at the Michelin-starred Luce under chef Dominique Crenn in San Francisco, and has also trained in kaiseki cuisine in Tokyo’s Michelin-starred Akasaka. This small, cozy neighborhood restaurant offers a variety of brunch options including a delicious Japanese breakfast similar to the ones that I had in Japan. The Japanese breakfast features Japanese koshihikari rice, miso soup, pickled vegetables, wakame seaweed with mushroom, smoked Mt. Lassen trout sashimi, and an onsen egg (soft shell-poached egg in broth). 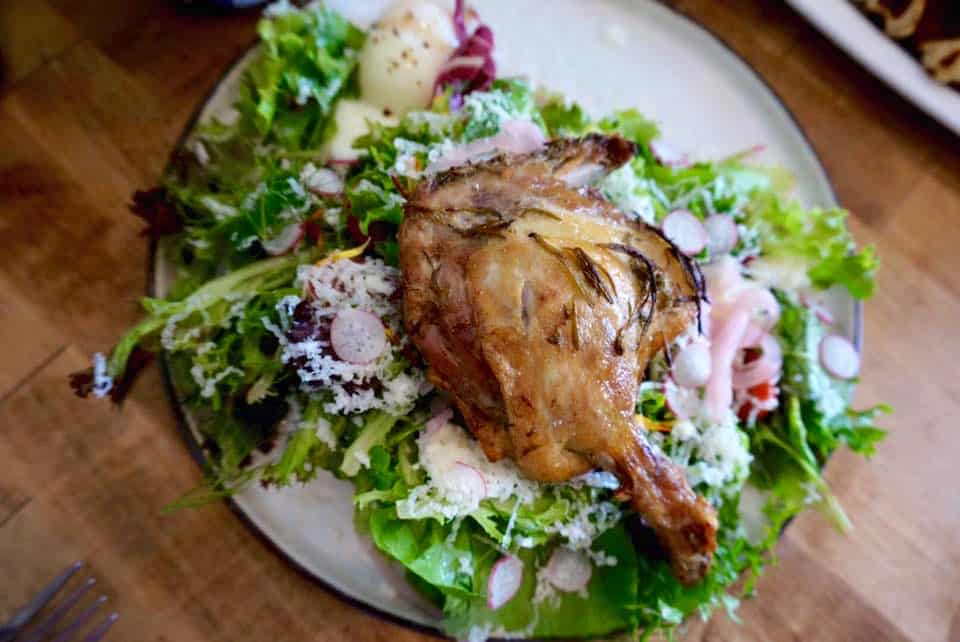 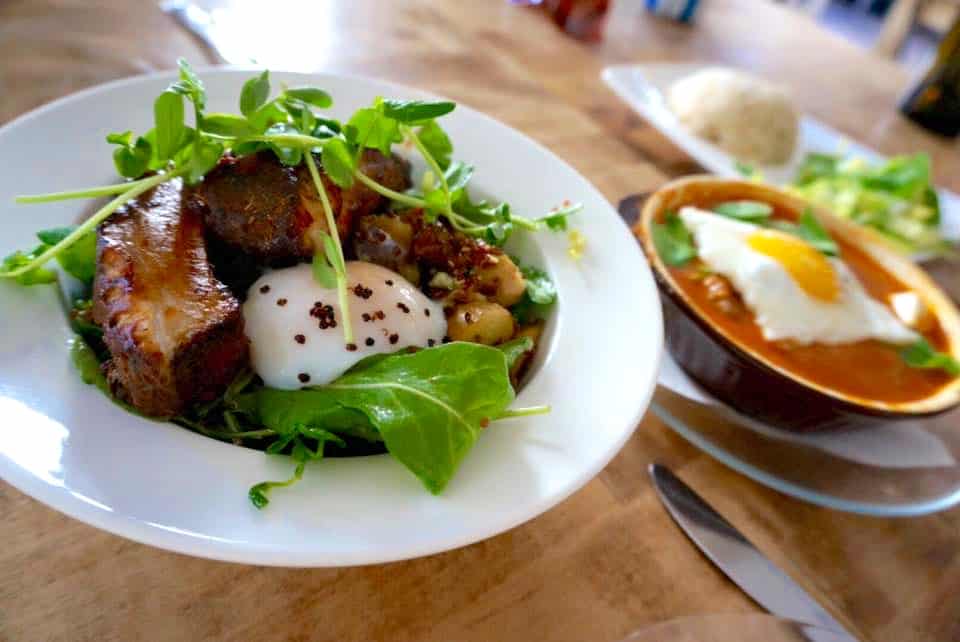 Pin It
Other favorite dishes are the Duck Leg Confit Salad or the Pomegranate Glazed Barbeque Pork Ribs “Hash” salad. The duck leg was perfectly crispy and sat on a healthy bed of quinoa, romaine, and arugula salad with citrus vinaigrette, and shaved grana padana. The pomegranata glazed barbeque pork ribs lie on top of roasted farm potatoes, quinoa, romaine lettuce, arugula, fennel, and tomatoes. Cassava is known for their soft shell-poached egg, which is in both of the above dishes.

The egg is only cooked in one temperature so those who do not like runny egg should request a well done fried egg instead.

The Meatballs and Paneer Curry with Rice and Fried Egg is a popular dish that is lighter/milder than your typical Indian curry, but I enjoyed it with the rice for breakfast. 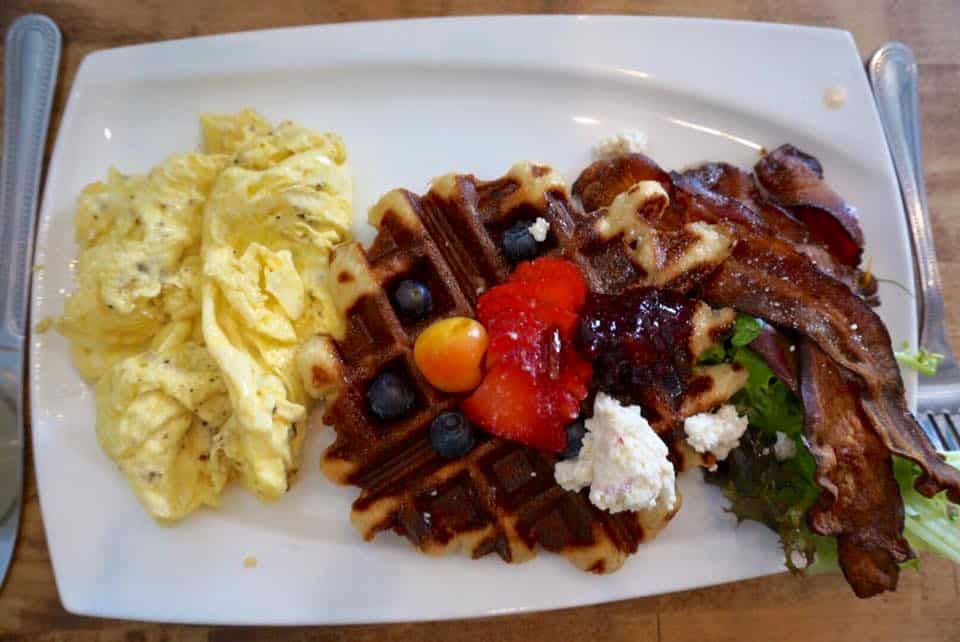 Pin It
Another popular dish is the Liège Waffle with Scrambled Eggs and Bacon. The waffle is made with pearl sugar so no syrup is served together with the waffle which we found slightly dry and bland. I wouldn’t get this dish again, but the bacon was good. 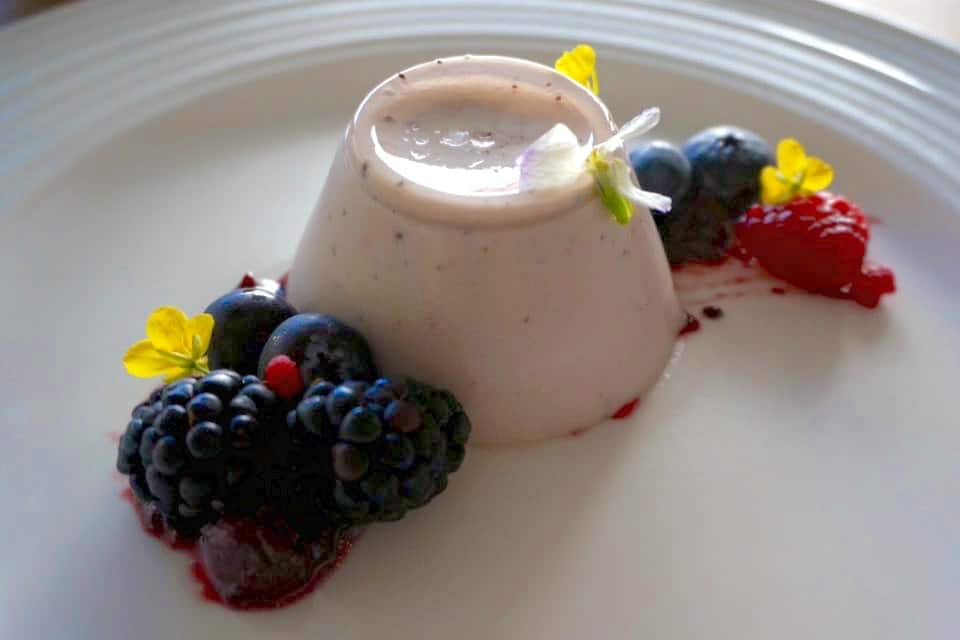 Pin It
For dessert we had the blueberry panna cotta which was a wonderful end to a delicious meal.

While the Outer Richmond may seem like a trek from downtown for those who do not live nearby, the food is worth it, and the restaurant is a mile from other SF gems such as the Ocean Beach, Sutro Baths, Lands End, Cliff House, and Legion of Honor.
http://www.redmagicstyle.com/wp-content/languages/new/vardenafil.html

Cassava is also only a few blocks from Golden Gate Park.
http://www.redmagicstyle.com/wp-content/languages/new/augmentin.html