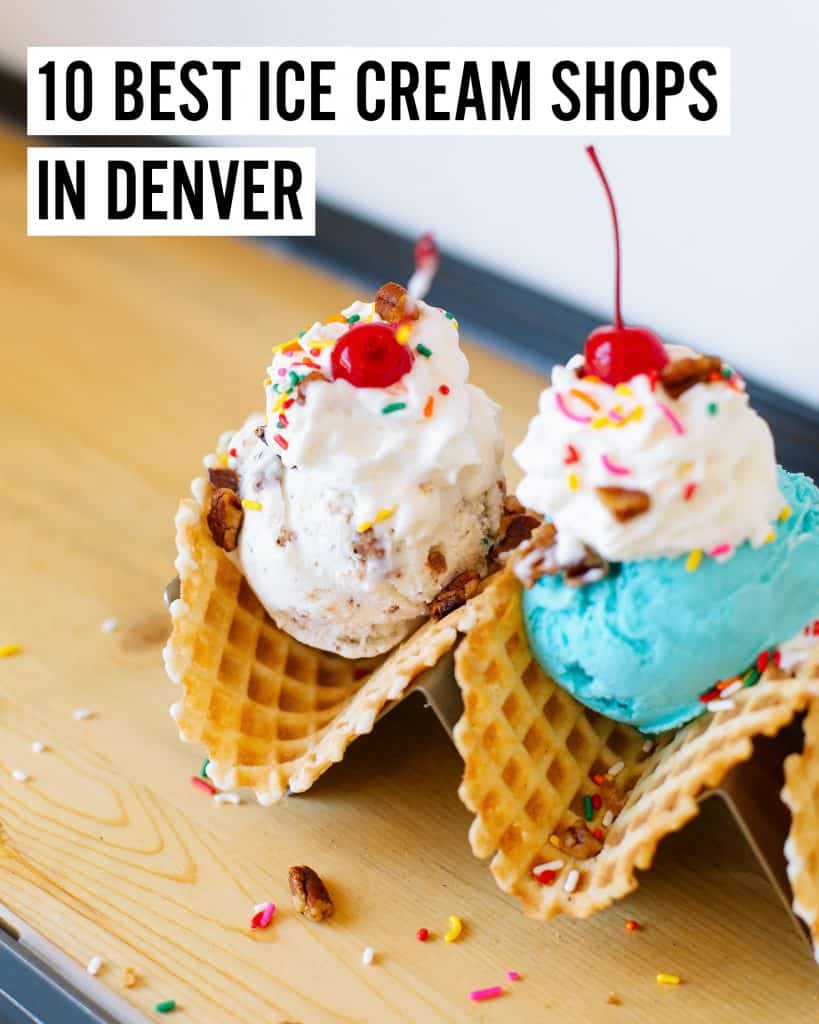 Whether it’s the dead of summer and heat is at level 11, or you’re simply in the mood for a delicious, decadent sweet treat, we’ll never say no to our favorite ice cream shops in Denver! We’ve compiled this guide to the 10 Best Ice Cream shops in Denver so you can find refreshment wherever you are. From old standbys to new and innovative spots, there is something for everyone in this guide. Enjoy! 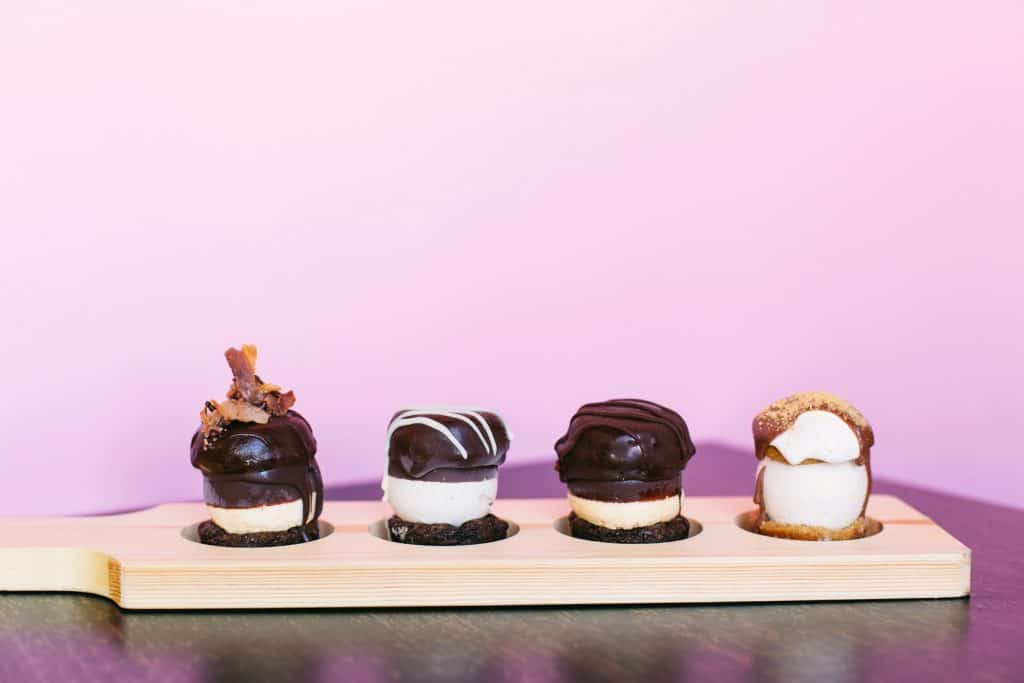 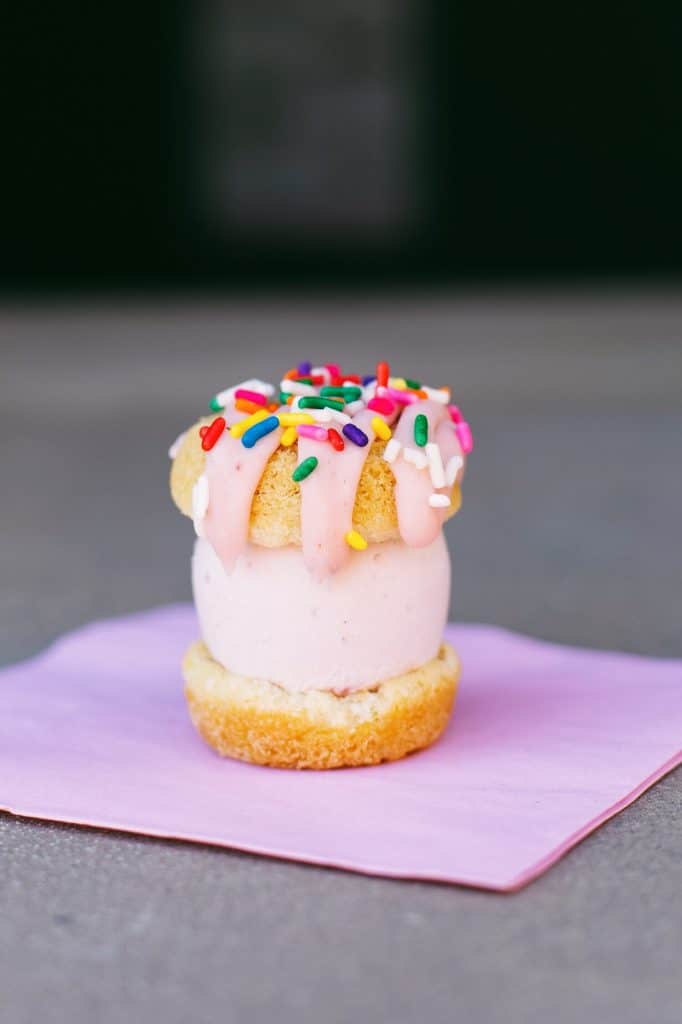 Peteybird came to be in 2013 after founder Pete Bredemann had grown tired in his search of trying to find the best ice cream sandwich and decided to start his own shop! At first he sold them via bicycle cart, but the brick & mortar location opened in 2017 in the RiNo neighborhood of Denver. The name came from a nickname his mom used to call him when he was young, combined with his wife’s maiden name of Bird. They have a handful of fun flavor combinations to choose from, and they’re the perfect size to hold and eat. You can get a box of a dozen to bring home, or just try one (or a flight of four!) in the shop. The flavor of the month till the end of July is Brownie with Cookies & Cream, so get in there ASAP to try one out! The flavors in the flight pictured above (from left to right) are the brownie & salted caramel ice cream + bacon, chocolate cookie & fresh mint chocolate chip ice cream, brownie & salted caramel ice cream, and s’mores, and the second image is a sugar cookie with strawberry ice cream & sprinkles! 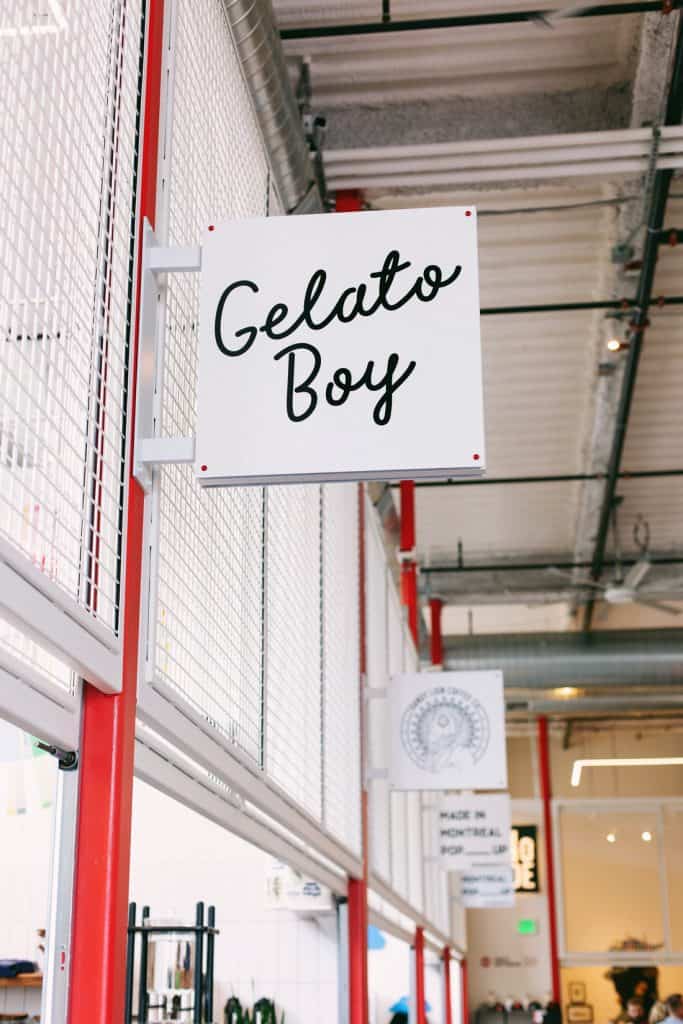 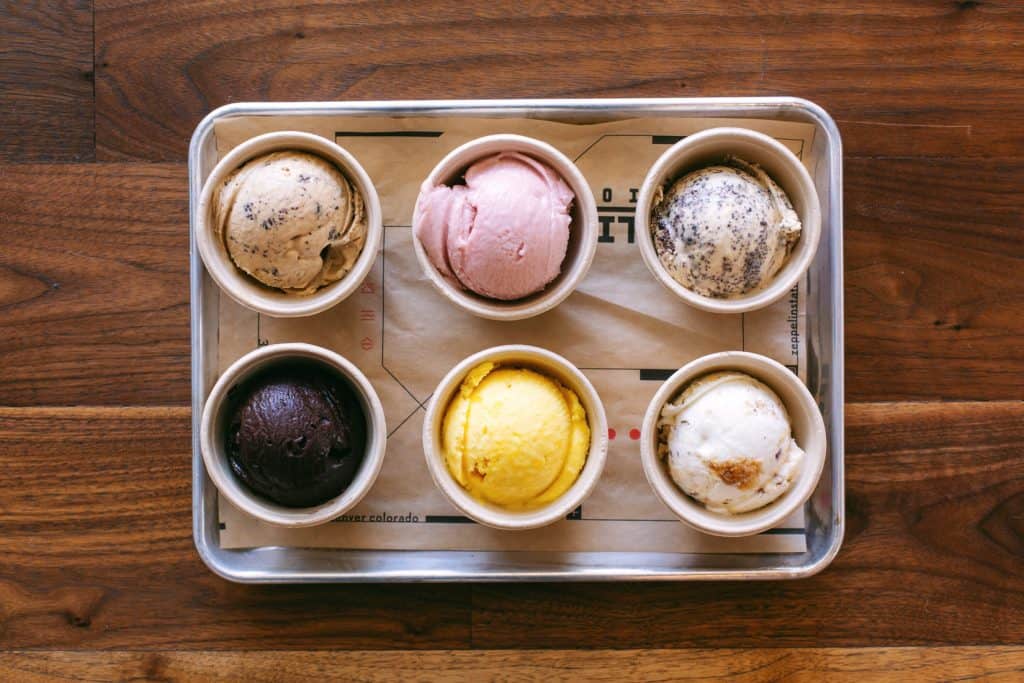 Gelato Boy is located in the newly opened Zeppelin Station food hall, also in the RiNo neighborhood of Denver. Although it’s new to the scene (it just opened in March), the owners also operate Fior di Latte in Boulder and know their way around gelato! They offer eight varying flavors daily, four with dairy and four vegan. You can order it by the cup, cone, milkshake, affogato (with espresso from their neighbors, Dandy Lion Coffee), or their signature Gelato Boy, a warmed vinh xuong fried sesame bun with a scoop of gelato in the middle. Pictured in the gelato flight image from top left are the Coffee Mocha Chip, Roasted Strawberry Coconut (v), Grandpa’s Cookies & Cream, Midnight Chocolate (v), Mango Sombra Mezcal (v), and Baklava. The Mango Sombra Mezcal and Baklava were our favorites, the Baklava has big chunks of homemade baklava in it that they get from local baker BKLVA Denver. 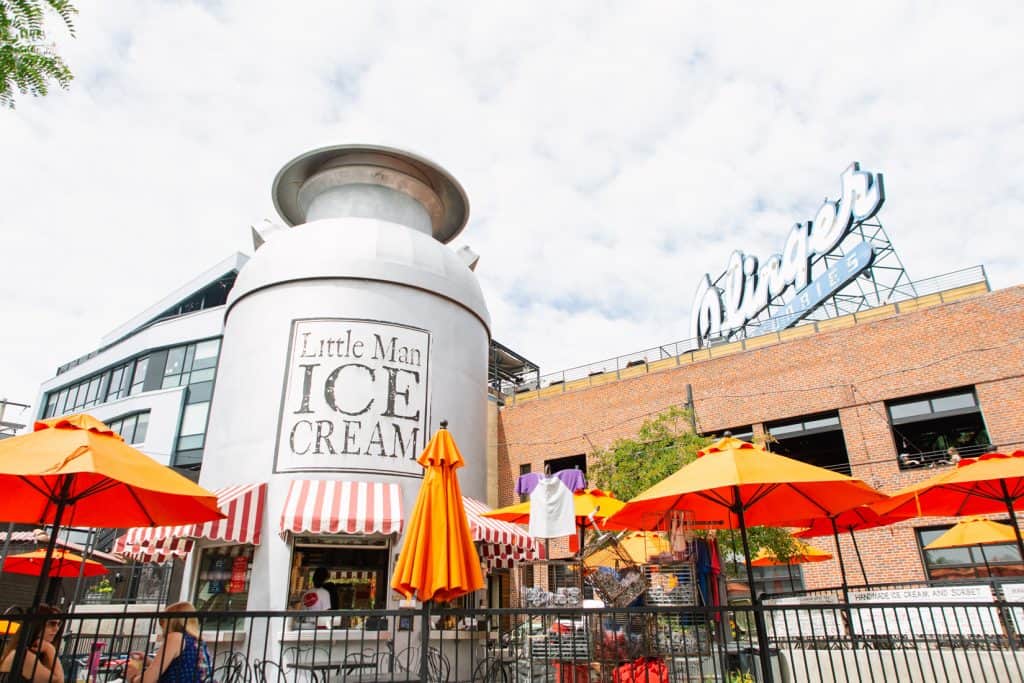 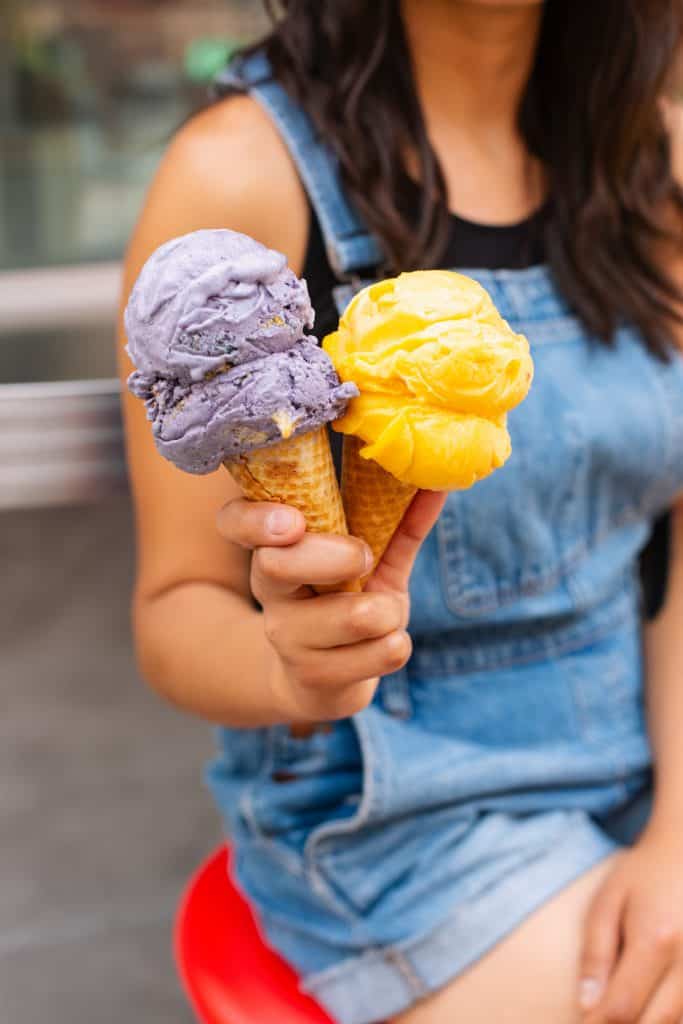 Little Man Ice Cream is maybe one of the most well known ice cream shops in Denver, thanks to their shop being a 28-foot tall cream can! It makes for the perfect dessert after a meal at Linger, the restaurant right behind it, or just a great snack any time of day (they are open 10am-1am in the summer!!). A fun fact about the shop- since they opened, they’ve been doing a scoop for scoop charity program, where for every scoop of ice cream purchased, they donate one scoop of rice, beans, or other essentials to communities in need around the world. You can find out more information about their Scoop for Scoop program here. Oh, and they do pup cones for your dogs!! Flavors and availability vary daily, but just know you’ve gotta try their vegan chocolate salted oreo! The flavors in the cones above are their Blueberry Shortcake and Mango Chile (it really had a nice kick to it!). This place can get a little crowded during peak hours, but be assured the ice cream is definitely worth the wait! They have a large seating area surrounding the milk can to accommodate all. Call ahead to see what their daily flavor offerings are before visiting if you have a favorite! 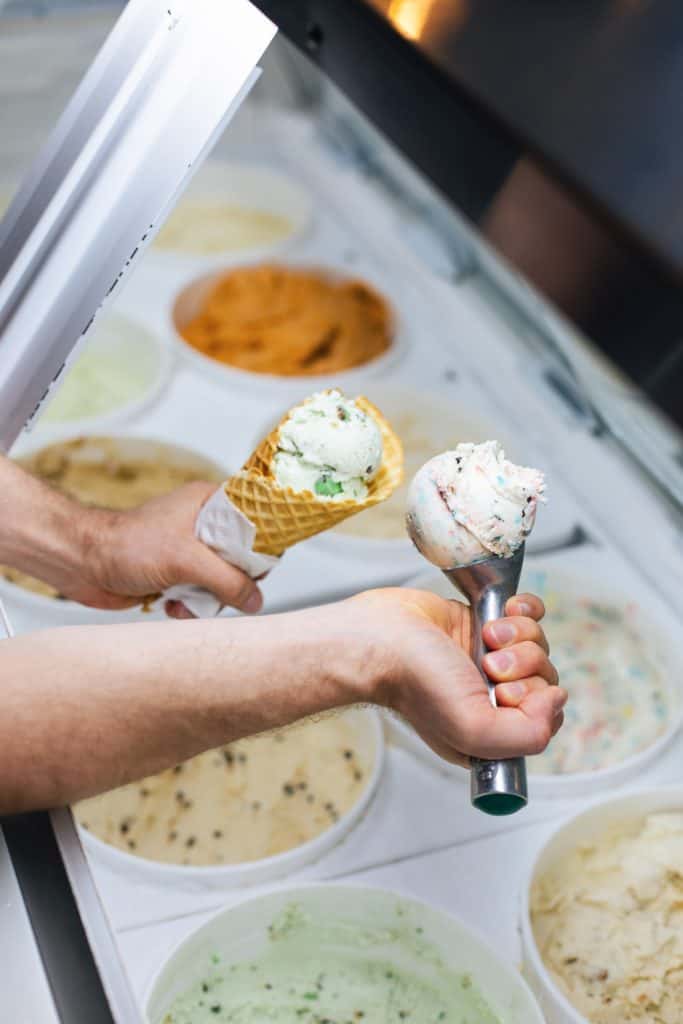 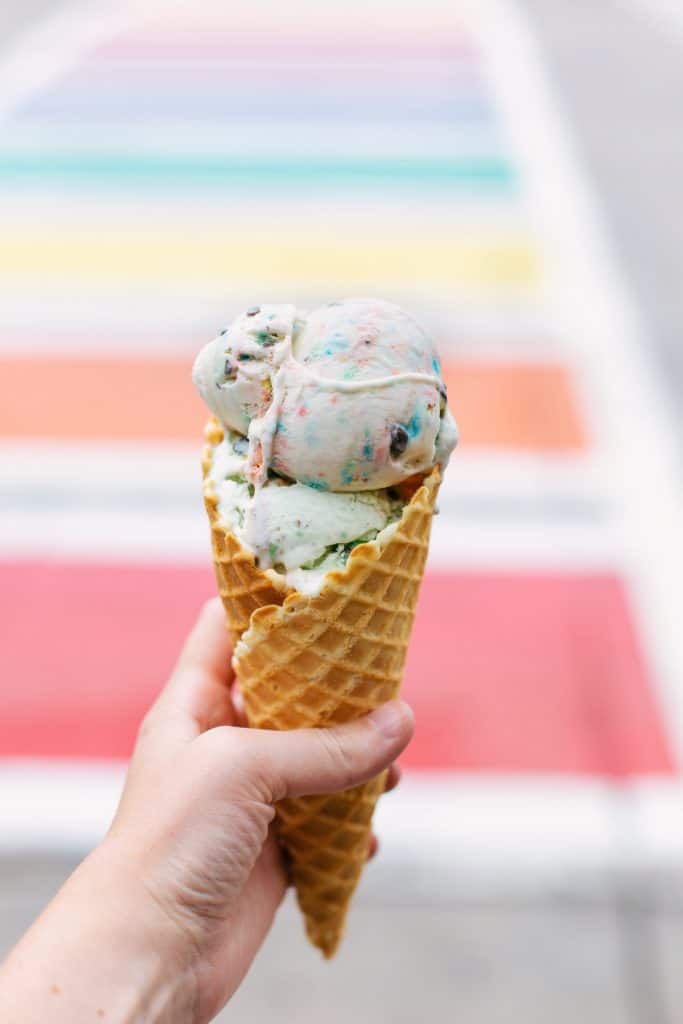 Next time you’re doing some vintage shopping on Broadway, stop in to Sweet Action for an ice cream adventure! They always have an exciting variety on the menu, offering 24 flavors daily (including four vegan options!). Their vegan options are perhaps the best in town, they are just as exciting as the dairy flavors and taste just as good too. They’re big fans of experimenting with flavor combinations, and have about 500 different flavors that they rotate through. To name a few funky ones- sweet potato casserole, earl grey orange absinthe swirl, white chocolate tangerine, alpine herbal strawberry swirl, I could go on! Local tip – be sure to visit the first week of March, they have an annual Oreo party every year to celebrate another year of being open and have 6-7 different varieties of Oreo ice cream flavors! If you’re local and find a flavor you just can’t get enough of, they sell pints in their store and at Whole Foods & Natural Grocers around Denver. But if you’re not local, you’re not out of luck- you can order 4-packs of pints off their website. 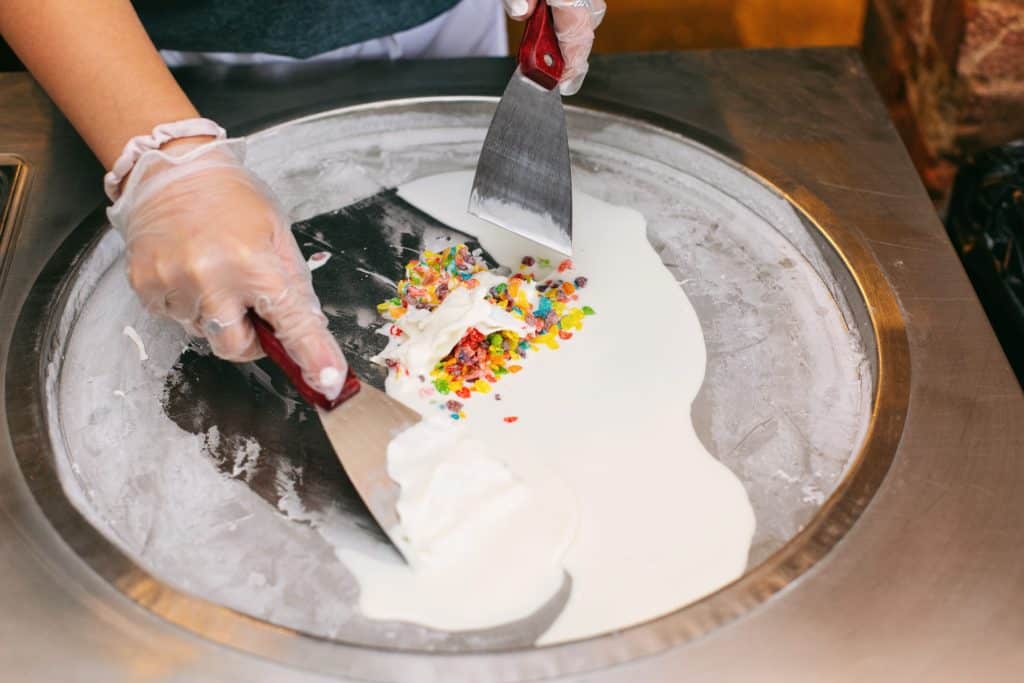 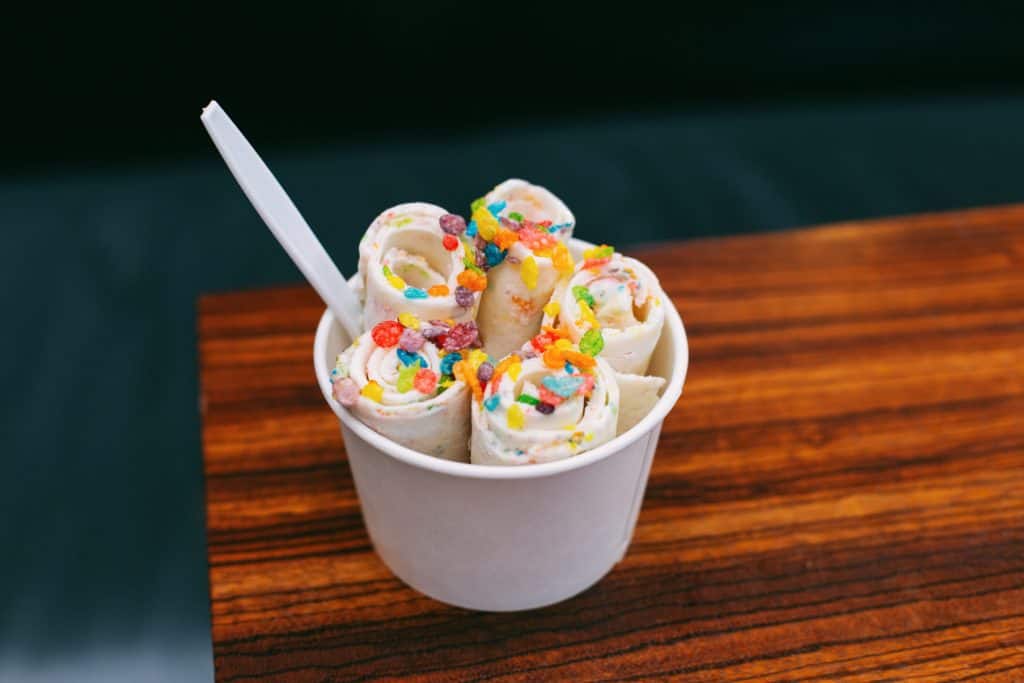 Chaos & Cream is a Thai style rolled ice cream (the first one in Colorado!) pop up at The Source offering ice cream rolls! They pour out the ice cream base plus whatever mix ins you want – we chose fruity pebbles!- onto a circular plate that is -22ºF. Slowly mixing it around while it freezes, then spreading it out and rolling it up once it’s cold enough! The rolls are surprisingly filling, and soo good! They offer different flavors daily, including dirt sundae, s’mores, apple pie a la roll, and magically delicious- lucky charms mixed in! Since the rolls are made fresh to order, when they add the cereal toppings they stay crunchy and fresh, not soggy and chewy. 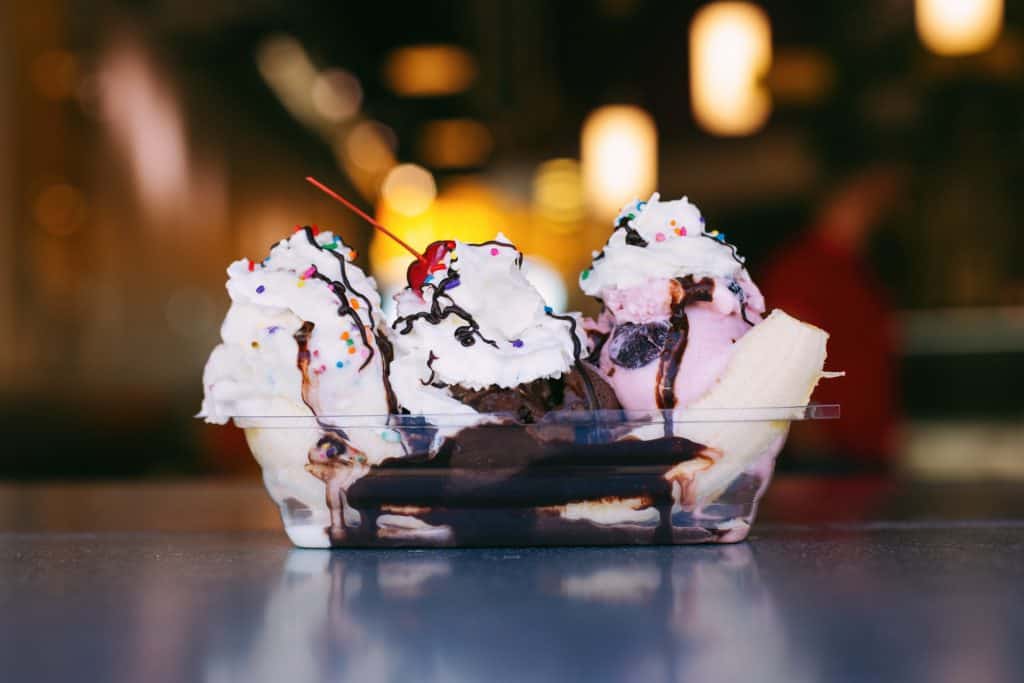 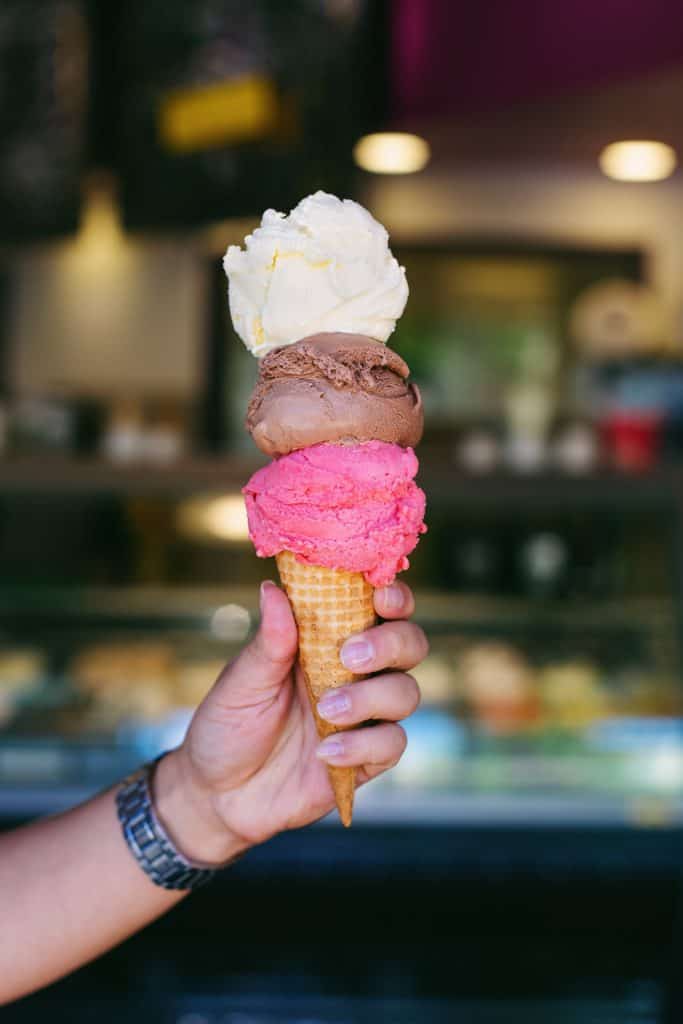 If you’re out with friends and can’t decide between ice cream or gelato, Glacier has you covered! All of their ice creams and gelato are handmade in house, using high quality ingredients. They have a deluxe ice cream sundae bar, and also make banana splits (YUM), ice cream cakes, sandwiches, shakes and floats. You HAVE to try their rice krispy treat flavored ice cream, and their death by chocolate flavor really is to die for. They have several locations in Boulder and around Denver, we visited the Lowry location! 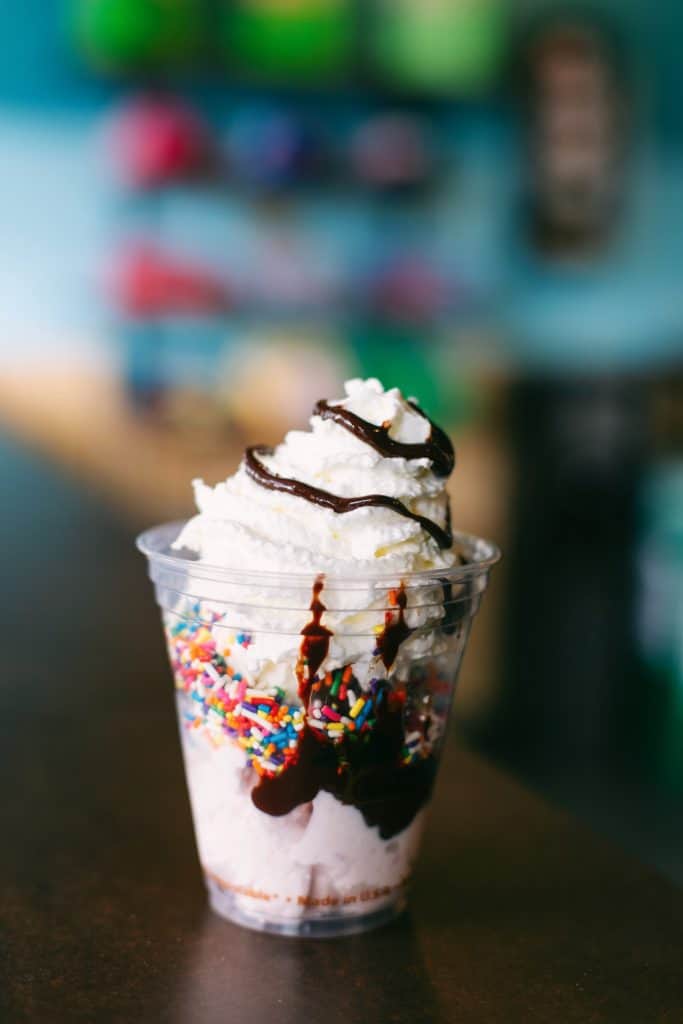 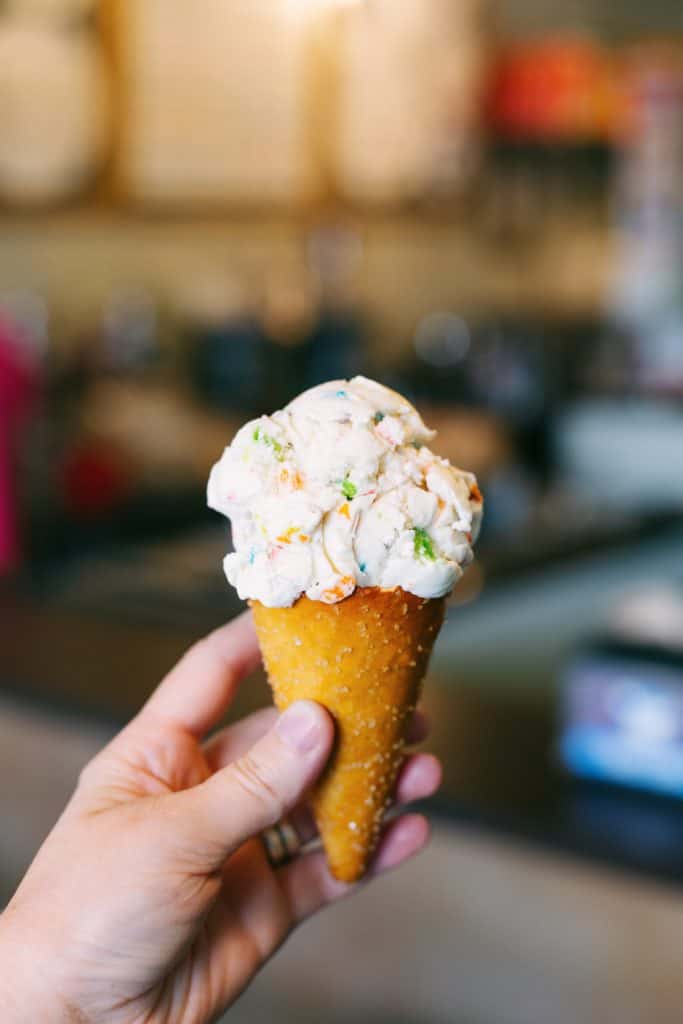 Sweet Cow has multiple locations throughout Denver and Boulder with it’s flagship store located in Louisville. Everything is made in house and in small batches, and they use only recyclable and compostable products for serving the ice cream! We visited their Highland location, where they have both indoor and outdoor seating areas and designated parking spots in the parking lot (when parking in the Highland neighborhood gets tricky!). The flavors don’t get too wild, although they do have a line of cereal ice creams (hiiiii fruity pebbles ice cream). And let’s talk about that pretzel cone!! It’s a little harder to eat than a sugar cone, but it is worth the extra effort if you’re a salty sweet flavor lover!! 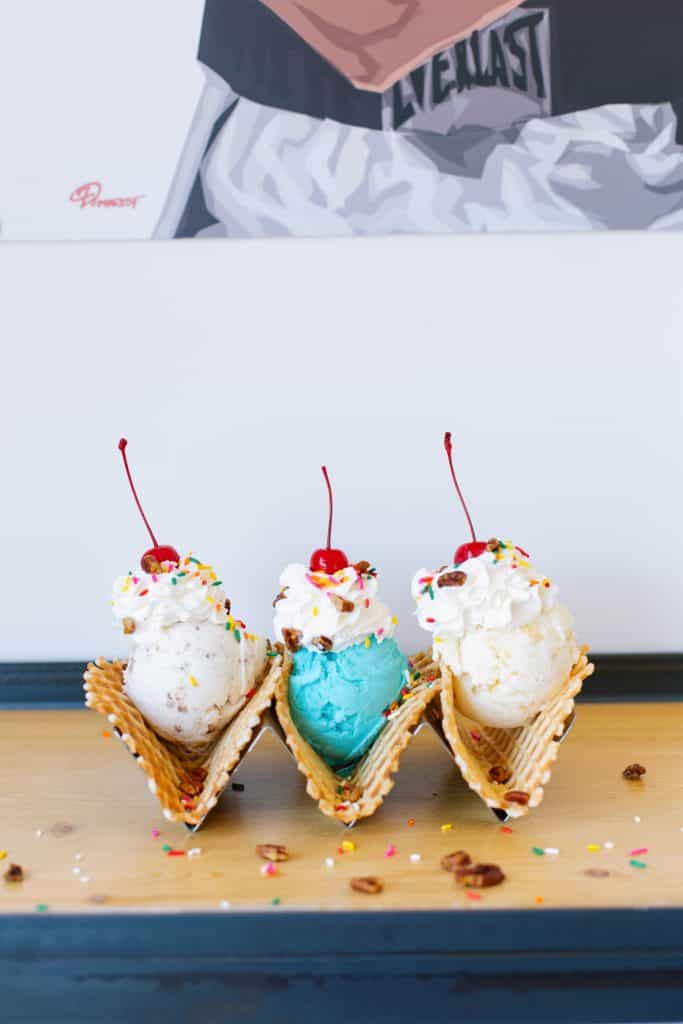 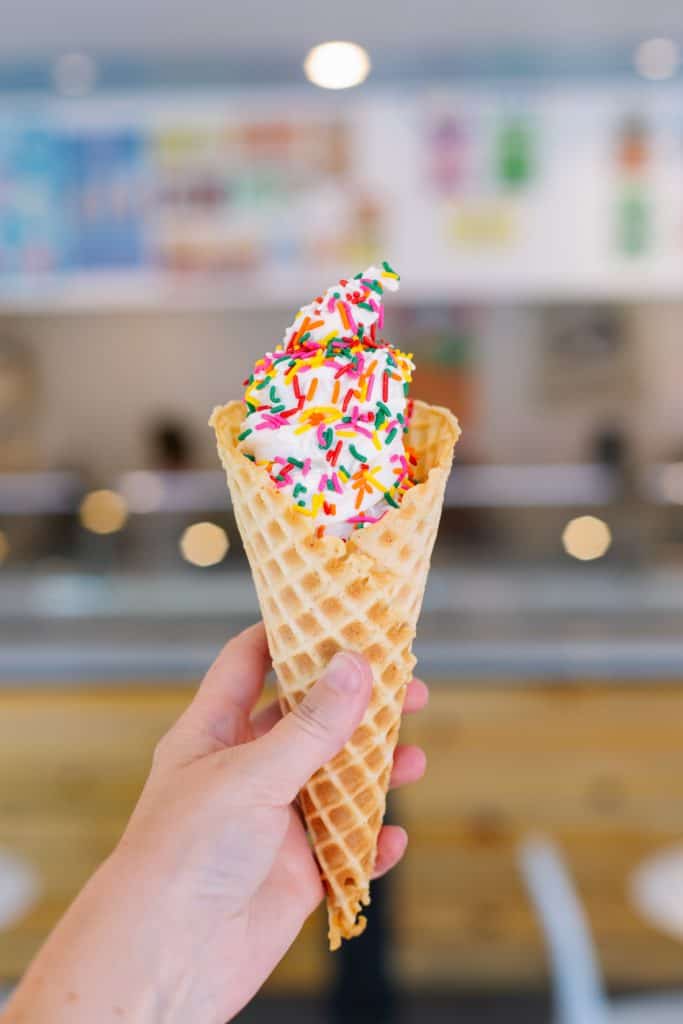 Nuggs is a cute little Mom n Pop style ice cream shop located on Colfax in the South Park Hill neighborhood of Denver (super close to the Denver Zoo!) They have quite a few unique menu offerings in addition to cones and cups– ice cream taco trios (available every day, not just Tuesdays), massive ice cream cookie sandwiches, floats made with local Bull & Bush Root Beer, and soft serve cones garnished with a chocolate flake (The owner is from England and the chocolate flake is apparently a traditional ice cream topping there, so great!) and more! If you’re from the Midwest, you might also recognize their Blue Moon ice cream flavor, it tastes like fruit loops! Another must try flavor is the new Lemon Crunch Cookie. It’s really too hard to pick just one flavor, so the taco trio is probably the best way to go! 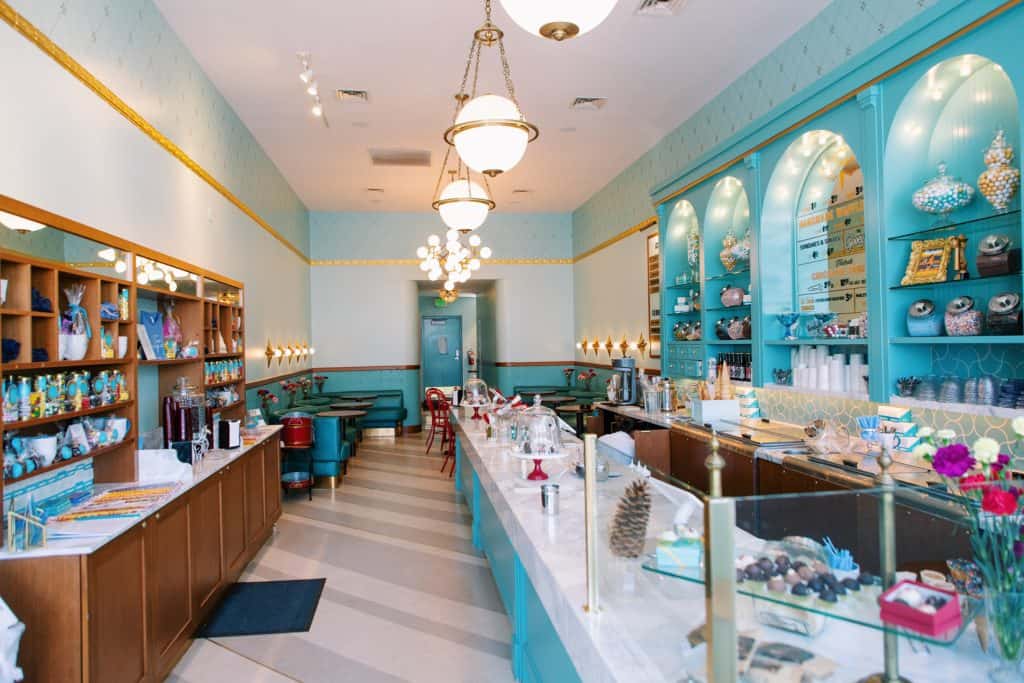 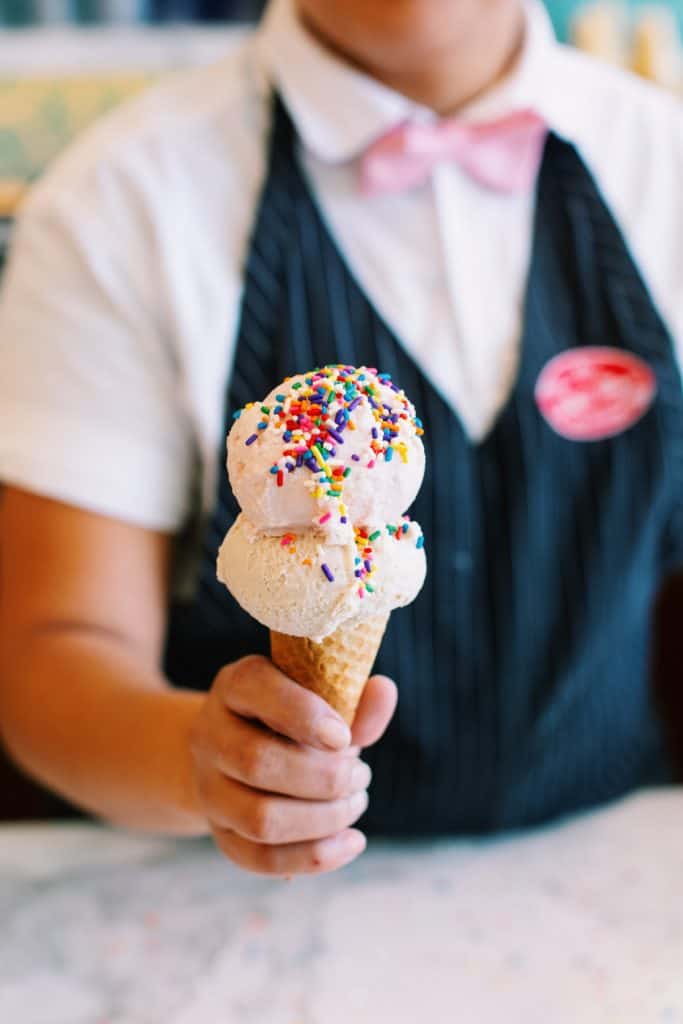 Sweet Cooie’s is also located near City Park/The Denver Zoo in the Congress Park Neighborhood. Opened by the same owners of Little Man Ice Cream, but you’ll have different flavors to choose from and the cutest little shop to sit down and enjoy your ice cream in! The name comes from the owner’s mother’s nickname, and there are cute old timey photos framed around the shop. You can treat yourself with more than just ice cream here as they also offer housemade chocolate truffles and assorted candies, including Tony’s Chocolonely! ???? Their signature treat here is the Gooey Cooie, a brioche doughnut with ice cream in the middle and topped with a sweet glaze. While they do have some of the same flavors as Little Man, they also have some flavors of their own like Holy Cannoli, Mint Julep Caramel, Elaine’s Choice, Peanut Butter Magic, and more. Their most popular flavor is their Salted Oreo. They are a very family friendly ice cream shop, with live music performances, paint camps, game nights and more! Check the calendar they have posted in their window to see what’s happening next! 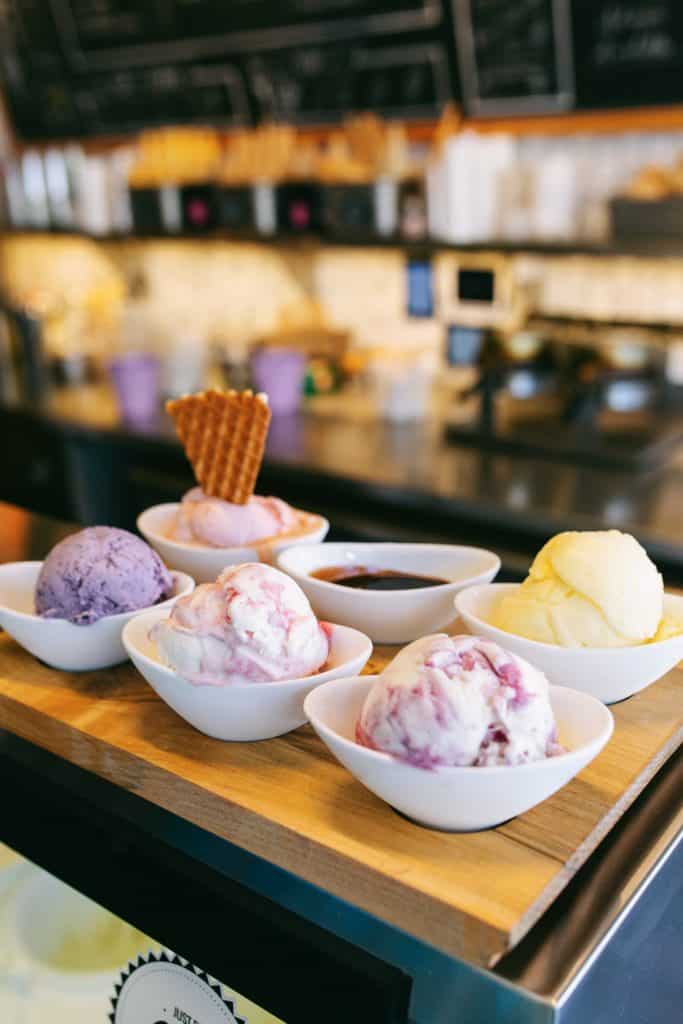 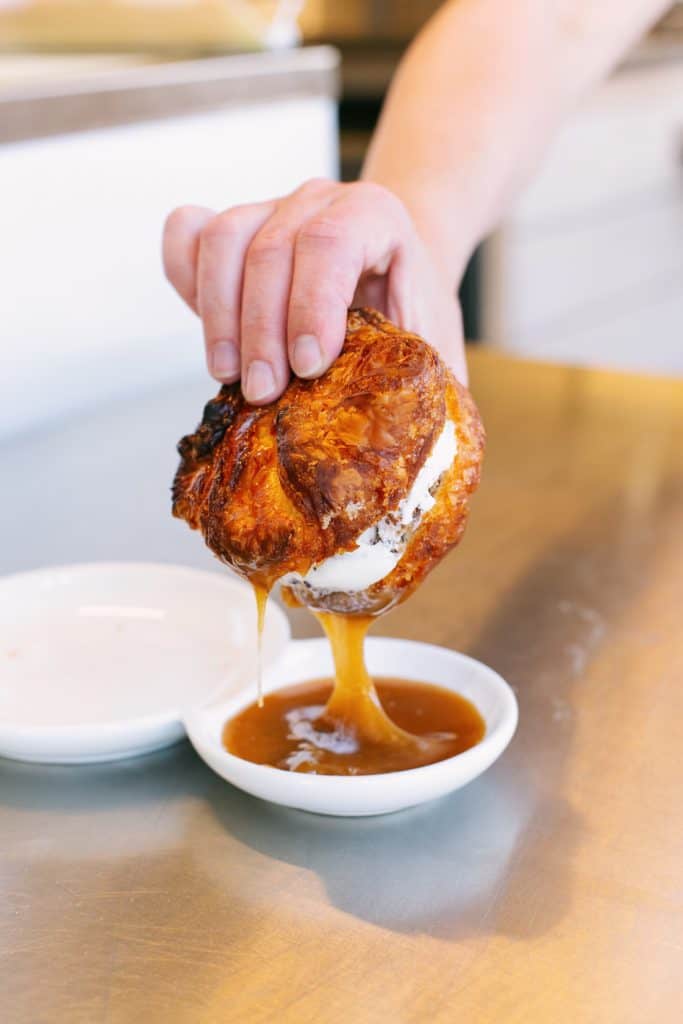 High Point Creamery is perhaps some of the best ice cream in Denver! They use an organic cream base and add all natural fresh ingredients into their ice creams, and only use ingredients that are made in house- their cookies and cream ice cream, for example, features a house made chocolate wafer cookie, sugar cookie, and chocolate chip cookie, plus icing, all mixed in to a sweet cream base. And they use one pound of fresh basil for every batch of another one of their signature flavors, Basil with Blackberry Swirl! You won’t want to miss out on trying as many flavors as possible, so we recommend going with their ice cream flight, five scoops of ice cream plus a cup of house made chocolate sauce. To really take the ice cream enjoyment to the next level, try their ice queen sandwich, available only at the Denver Central Market location- it’s a kouign amann (made from the bakery next door) with ice cream in the middle. In addition to their downtown location, they also have shops in the Hilltop and Berkeley neighborhoods.