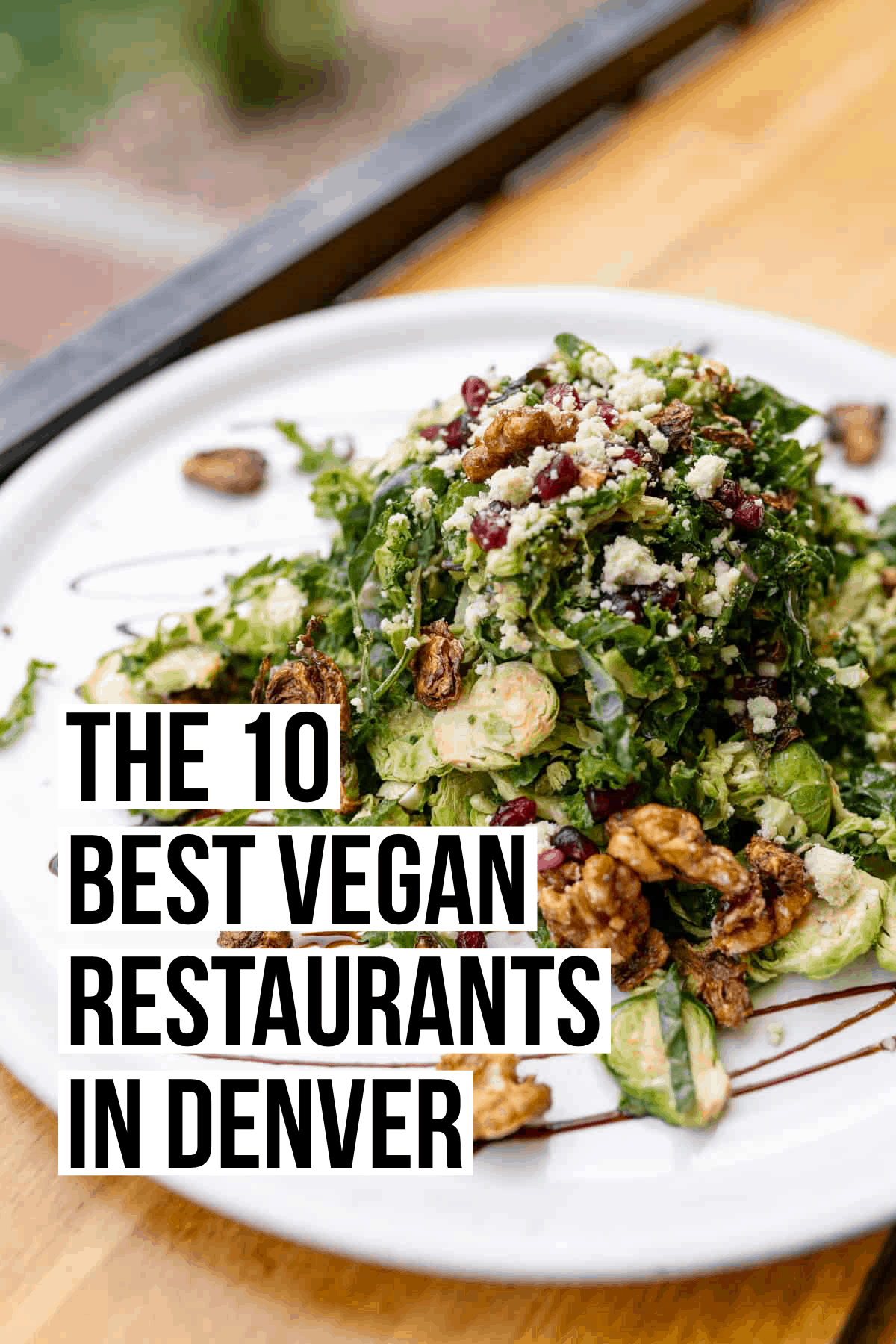 There have always been vegan restaurants in Denver, one of the most forward-thinking and health-obsessed cities in the U.S., but with plant-based eating on the rise across the nation, even more are options are popping up and we couldn’t be more excited. These vegan restaurants have proven to be a much-welcomed addition to the city of Denver for both herbivores and omnivores alike. Seriously meat-eaters, don’t look away!

The restaurants you’ll find below serve up inventive, exciting, absolutely delicious food – not the plain old salads or veggie platters you might imagine when you hear the word “vegan”. So sit back and prepare to be hungry as you enjoy our compilation of the best vegan restaurants in Denver!

City o’ City and Watercourse Foods (keep reading) are under the same ownership, but both spots definitely deserve a place on this list as they each have different chefs, two entirely different menus, and both serve amazing vegan food. City o’ City has a more laid back vibe, with the option to just order a coffee from the counter, sit at one of their several bars, or take a table for a more traditional dining experience. Come in at any time of day (they’re open from 7 a.m. to 2 a.m. daily) to revel in their seemingly endless plant-based offerings. Your first priority when visiting City o’ City is to try their  “Chicken” & Waffles, a dish made with bourbon-brined, chicken-fried cauliflower topped with bourbon maple syrup, chive crème fraîche, and carrot bacon. Second on our list of favorites? The Pastrami Sandwich made with seitan pastrami on marbled rye. It tastes just as good as (if not better than) its meat alternative. 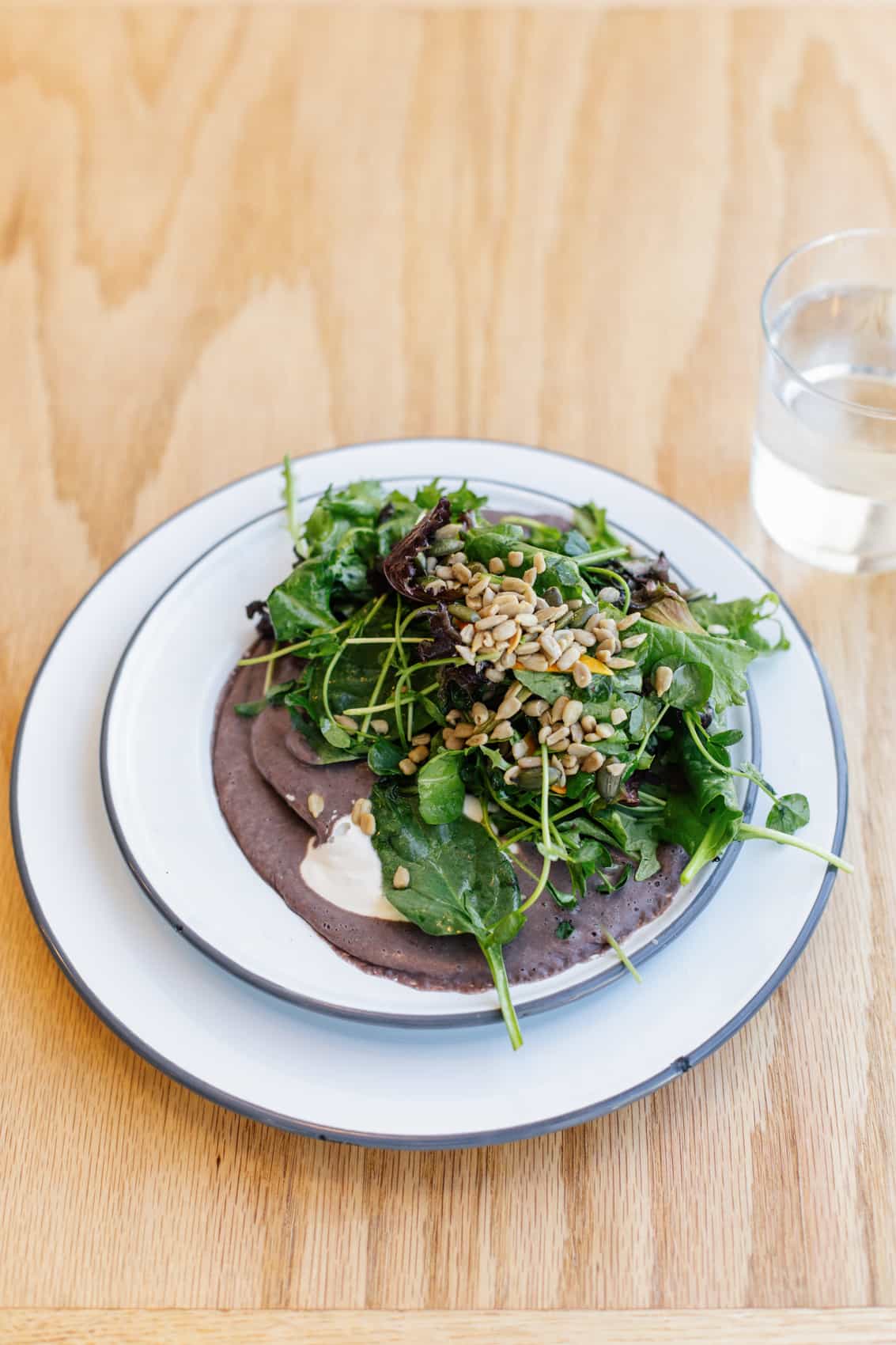 Hoja is a relative newcomer to the plant-based food scene in Denver but its owner has been around for a while with his food truck, Basecamp Provisions (which also offers amazing food). This hip little garden-style cafe serves up a fresh and inventive assortment of mostly vegetarian (all can be made vegan) and mostly Mexican food options. Get a breakfast burrito to go, or sit and relish over some Chilaquiles or Enfrijoladas (pictured) paired with a fancy drink or two.

Step back in time at So Radish, a colorful new 80s-inspired restaurant located in Old Town Arvada, a short 15-minute drive outside of downtown. Sit in one of their turquoise, tufted booths, find the drink menu inside a VHS tape container, and hear Madonna playing through the speakers overhead. So. Much. Nostalgia! The entire menu here is vegan, and though it’s a little on the pricier side, they’ve got some fun, tasty offerings that make it worth it. We recommend starting with the Spinach Artichoke Dip and going with the Country Fried Steak (the side of cornbread that comes with it is a secret star!), Crab Cakes, or Spicy Peanut Tofu as a main, depending on your mood.

In need of a nice night out? Somebody People is your place. This brightly colored, plant-filled, cute-and-cozy restaurant is one of the best vegan restaurants in Denver with its Mediterranean-leaning menu full of housemade pasta, risotto, and more. One thing we find really refreshing about Somebody People is the fact that you’ll never see fake meats on their menu. We strongly recommend their Carrot Bolognese, made with their funghetto pasta and paired with grilled-smoked oyster mushrooms and chimichurri sauce. It’s bound to be one of the most flavorful and unforgettable mushroom dishes you’ll ever have. Don’t forget to bring your own to-go container for any leftovers we doubt you’ll have, this is a zero-waste restaurant and they don’t offer disposable packaging (yay, Earth!). 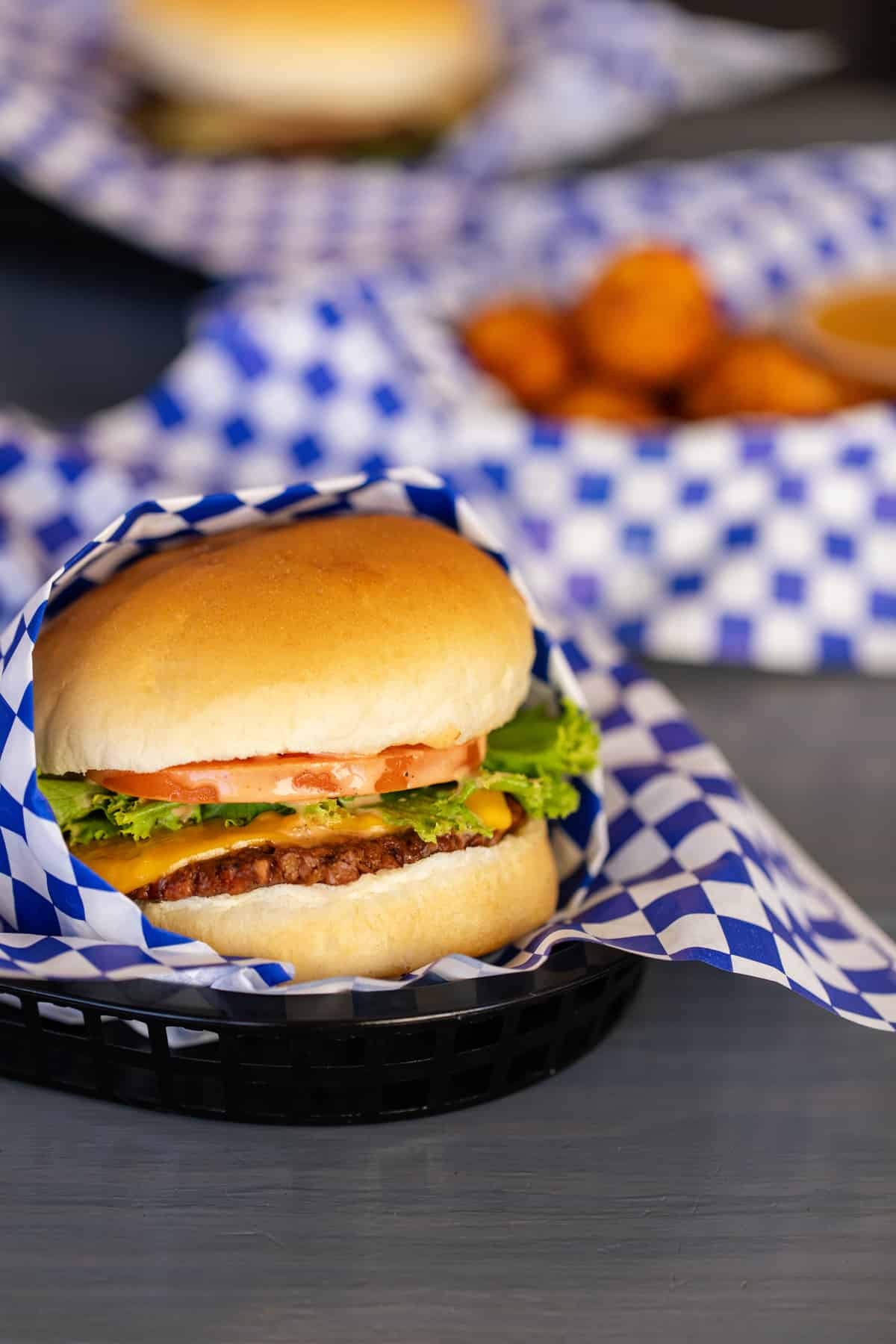 Meta Burger is perfect for those who still might occasionally crave meat but want to stay true to their plant-based lifestyle. An all-vegan restaurant, Meta Burger has a large menu with various burger and sandwich options, all housemade with a soy-based “meat” patty, veggie patty, or “chicken” patty. Their Flatirons burger, topped with shaved brussels sprouts, shallots, grilled mushrooms, and vegan gouda cheese, won Best Burger in America at the Seed & Wine Festival in 2018, and you’ll see why when you order one for yourself! Don’t hesitate to also order a side of their Meta Bites – breaded baked potato bites topped with bacon and chives and served with nacho cheese – for a hearty and delicious meal. 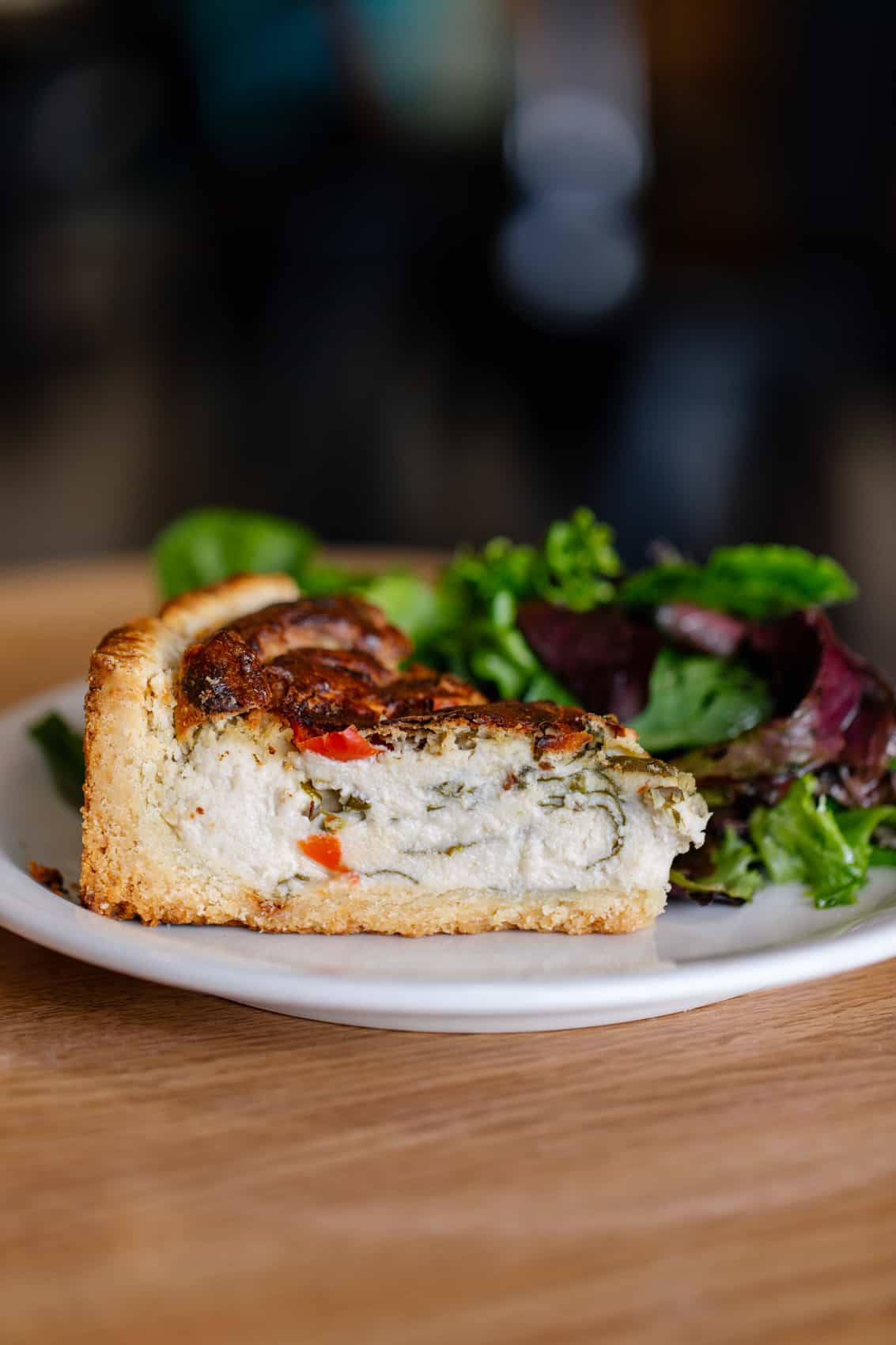 A lovely, tucked-away gem near City Park, Beet Box is an entirely plant-based breakfast and lunch neighborhood cafe with a killer sandwich lineup plus a seasonal quiche available on the daily. Try their Avocado Melt Sandwich and be sure to grab a vegan donut for a sweet end to your meal. You’ll no doubt be convinced that Beet Box deserves a spot on our Best Vegan Restaurants in Denver guide.

Calling All Early Birds: Check Out the Top 10 Breakfast Joints in Denver 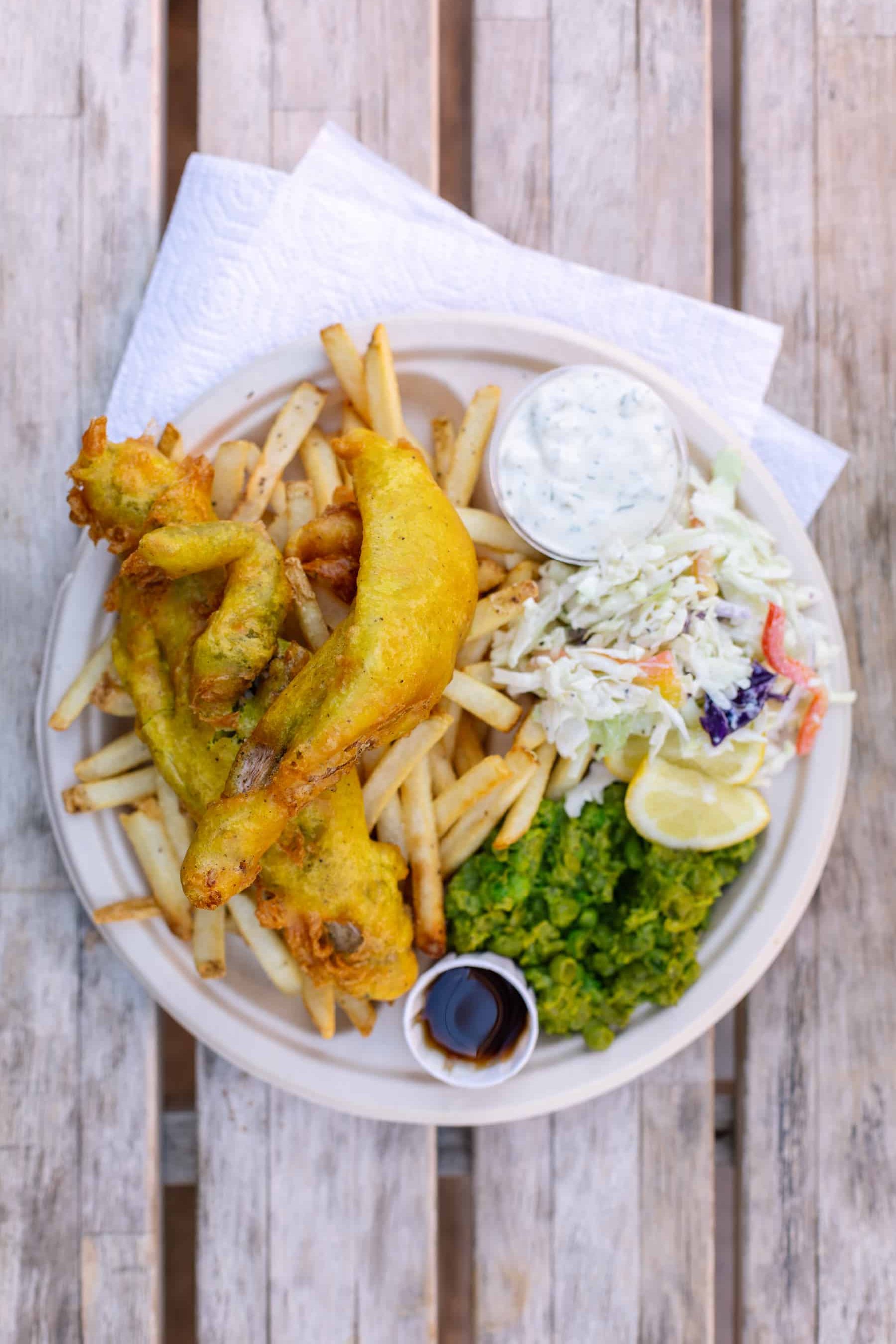 Undoubtedly the best vegan food truck in Denver, and definitely one of the best vegan restaurants in Denver, Wong Way is open year-round and with an ever-changing menu that’s so good, you’ll want to try everything at least once. Our favorite place to visit Wong Way Food Truck is on Wednesdays outside of Nooch Vegan Market on South Broadway, but you can also find them for brunch on Sundays outside Alternation Brewing Co, and other various spots around Denver (check the calendar on their site). If you’re lucky to see their “Fish” and Chips on the menu, you’ve got to order it, it’s bananas- literally- the “fish” is made with battered banana blossoms and has an extremely similar texture to fish! 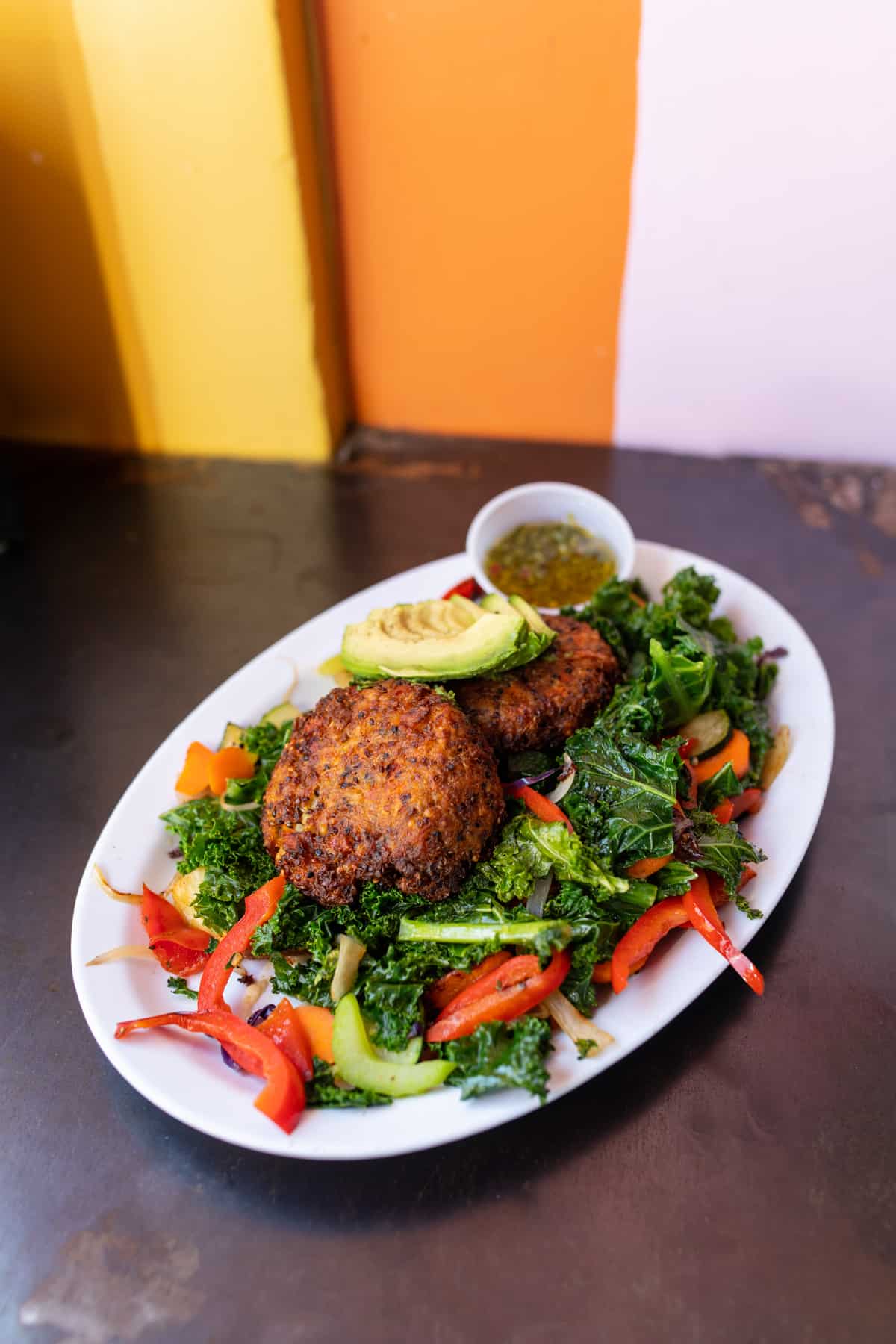 If you’re in the mood for a grungy, divey type atmosphere, but still wanting some veggies that aren’t french fries, Sputnik is your place. Though they are best known for their vegan corn dog and mac and cheese, the brunch menu has some real standouts including their Stacks of Vegan Power, made up of two tasty little quinoa cakes and at first glance veggies, greens, avocado, but hiding underneath is a special treat of potatoes and a creamy garlic sauce. Yes, please! You must add on the chimichurri sauce to this dish because when has chimichurri ever done you wrong? That extra flavor profile is a game-changer. Sputnik’s entire menu can be made vegan with the exception of their grilled cheese sandwich. Definitely don’t pass up this hole-in-the-wall gem when you’re searching for the best vegan restaurants in Denver. 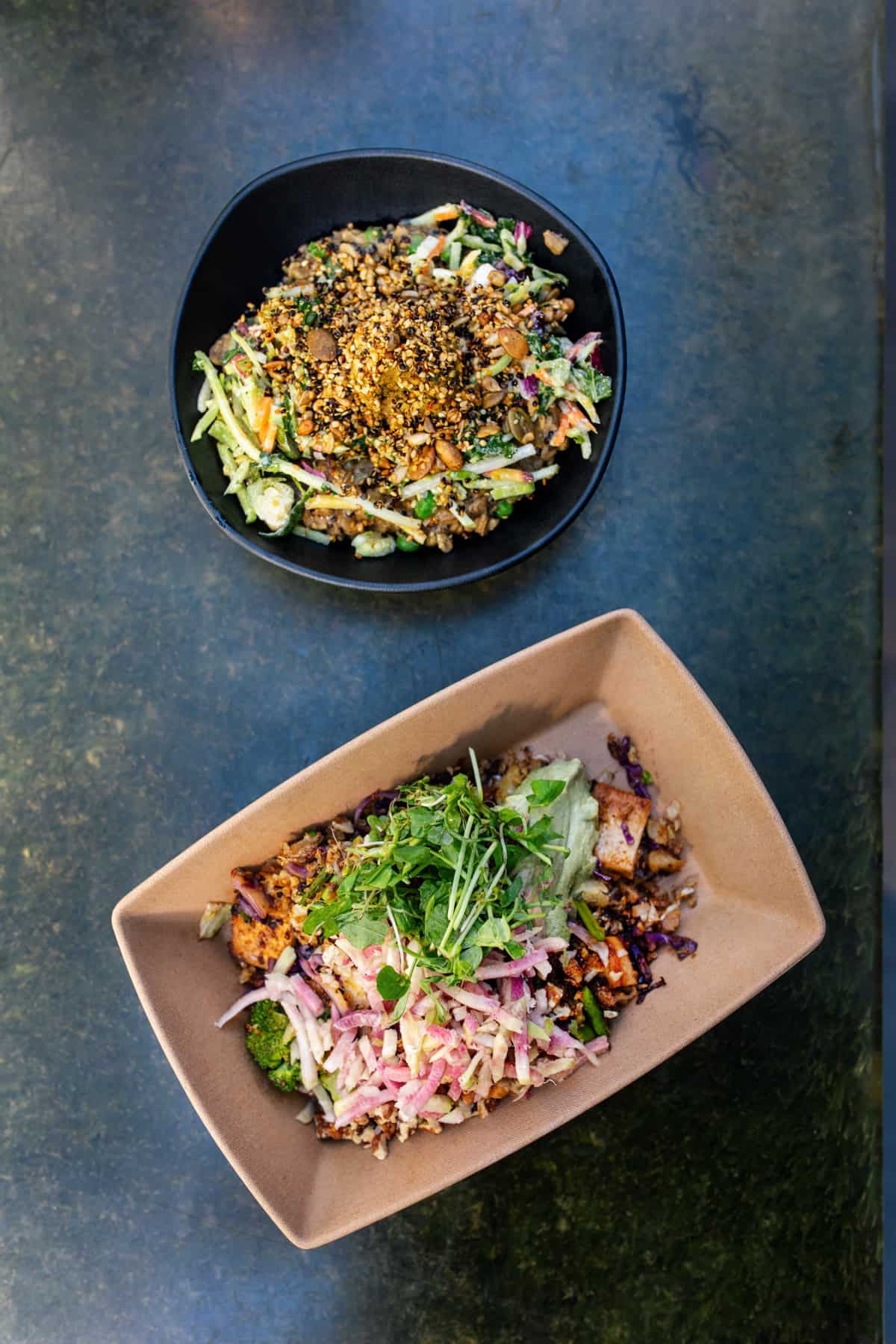 Located on Tennyson, Vital Root is one of the very best vegan restaurants in Denver. From the same owners as Root Down, Linger, El Five, and Ophelia’s Electric Soapbox (other well-known restaurants in the area), this family-friendly, fast-casual, vegetable-focused restaurant has something for everyone with super flavorful and fresh cuisines inspired from all over the world. Their menu is 99% vegan by request, and also 100% gluten-free by request. It’s hard to choose just one thing from the menu (we’ve tried nearly everything and have never been disappointed) but the Kitchari Bowl and Sunflower Risotto (both pictured) are great for first-timers. If that’s not enough food, the Yuca fries or Cashew “Queso” Dip make for great starters. If there’s a long line when you arrive don’t be intimidated- it moves quickly! 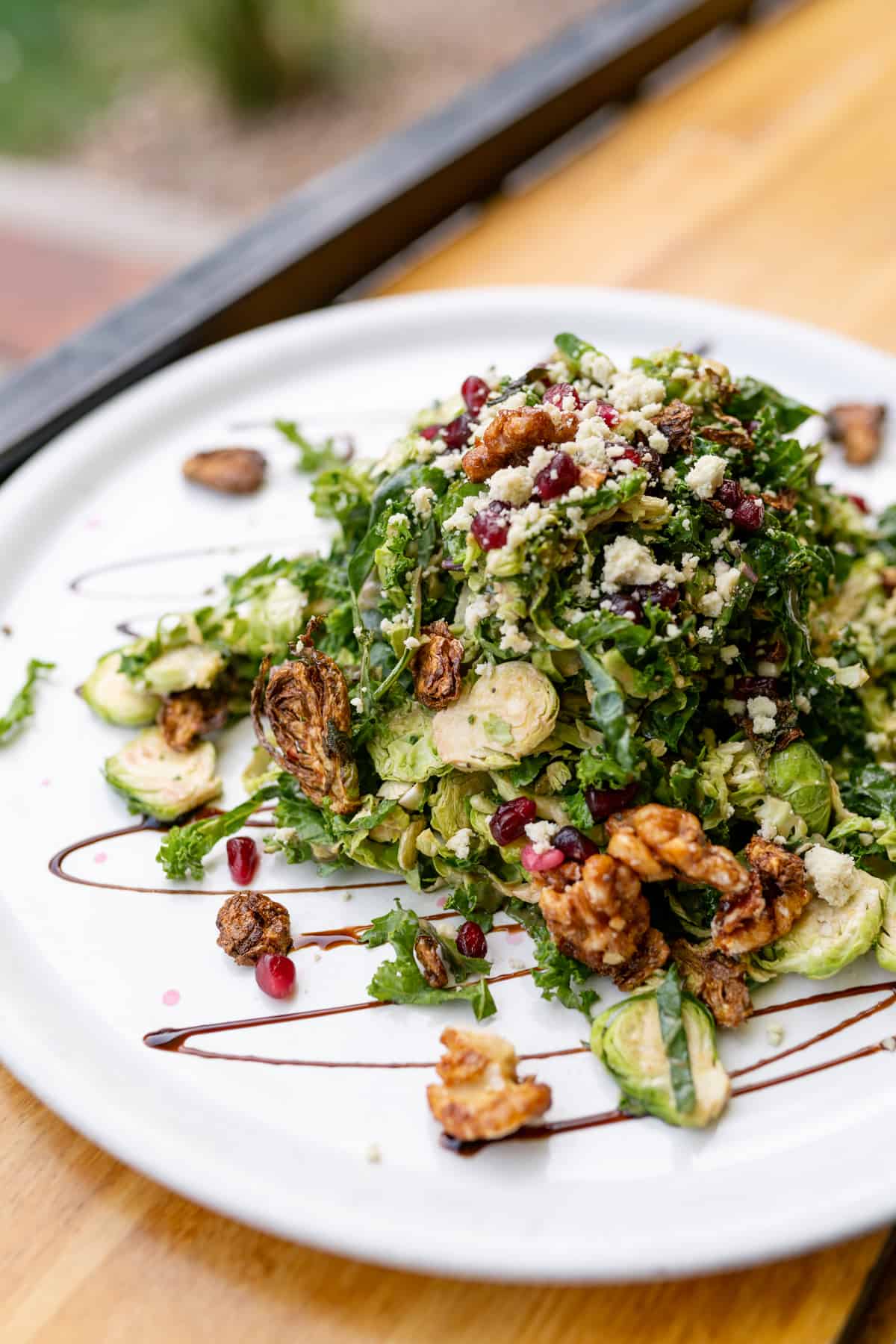 Pin It
Operating since 1998, Watercourse is one of Denver’s oldest plant-based restaurants and was an easy choice as the best vegan restaurant in Denver. The menu is extensive, breakfast is served all day, and you can indulge in a sweet finish to your meal with a shake made with vegan ice cream from one of our favorites in town, High Point Creamery. The Cuban sandwich is one of the longest-standing items on their menu (for good reason!) and features a nice little kick of flavor thanks to its pepperoncinis. You also can’t go wrong with the Brussels Sprout Salad – it’s as beautiful as it is delicious, and we’ve noticed that nearly every table has at least one person who orders it each time we visit! If you can only make it to one vegan restaurant in Denver, let it be Watercourse.