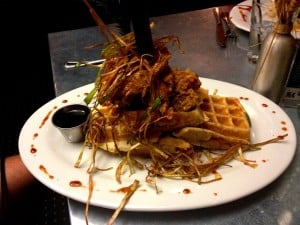 Pin It
Mother knows best. While venturing around Vegas with some friends, Mum suggested that we stop at Hash House A Go Go before our trip came to an end. So, we searched for the Imperial Palace, made our way to the second floor, and indulged.

In case you can’t tell, these were some of the BIGGEST portions we had ever laid eyes on.
https://libertyjuice.com/wp-content/languages/new/augmentin.html

For real.  This place is notorious for their gargantuan helpings.  My pals and I were absolutely famished by the time we arrived, so all was well.  Me and Truman’s entree: chicken and waffles-  Not usually my #1 pick, but these were f-a-n-t-a-s-t-i-c. Delicious crispy chicken, bacon waffles, and fried leeks topped with a warm maple reduction.  Speechless. 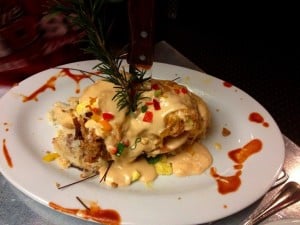 Pin It
Keith and Danielle’s pick: sage fried chicken benedict (as featured on man vs. food).  Spinach, fried chicken, bacon, tomato, griddled mozzarella, chipotle cream, and scrambled eggs.  Unbelievable. And, as if it was needed, topped off the evening with some of their “Andy’s Famous Bread Pudding” (worth it). To say the least, it’s a safe bet you won’t be able to finish your plate.  Split it.
Yummy spot in a strange location on the strip.
https://libertyjuice.com/wp-content/languages/new/vibramycin.html

Check it out.  Bon appetito.