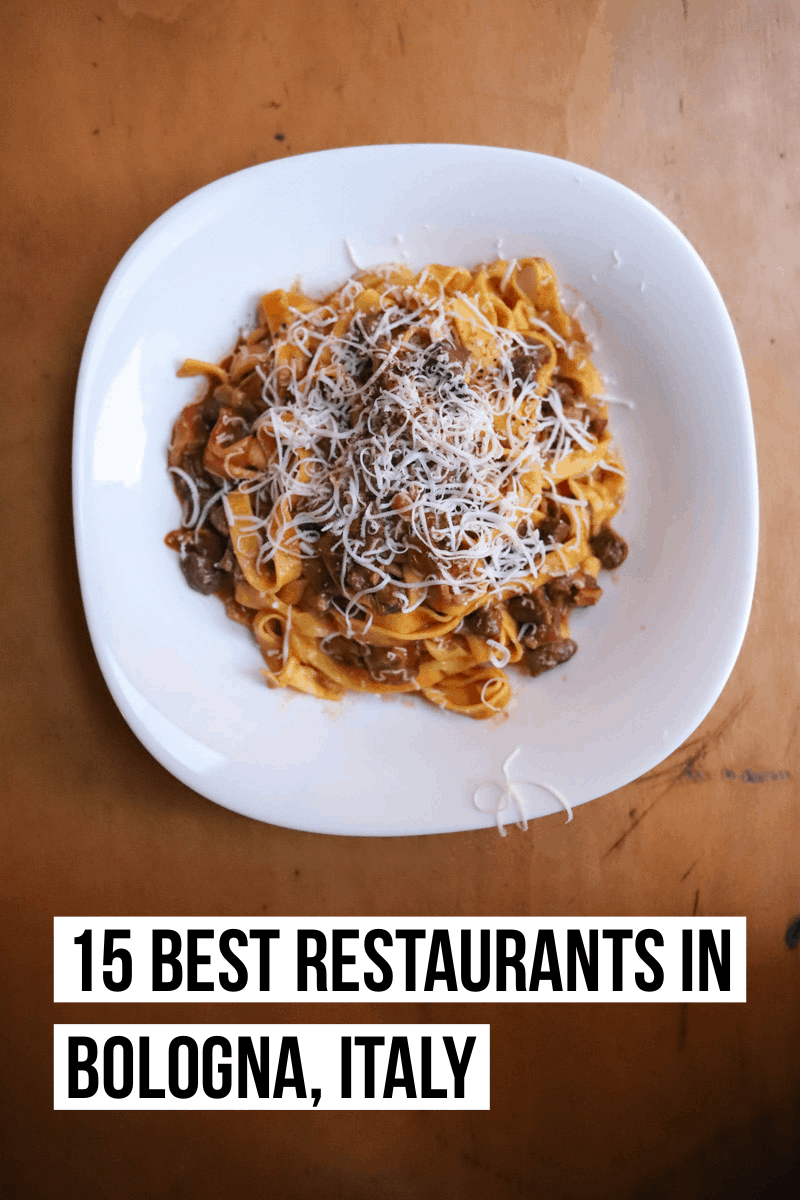 Welcome to our guide to the best restaurants in Bologna, Italy. At this point in time, you might be wondering, why Bologna? With so many other places to visit in Italy from Rome to Tuscany to Venice to Florence, you might be tempted to forgo visiting this Emiligia Romagna city. If you need further convincing, here are a few reasons why Bologna should be on your list: 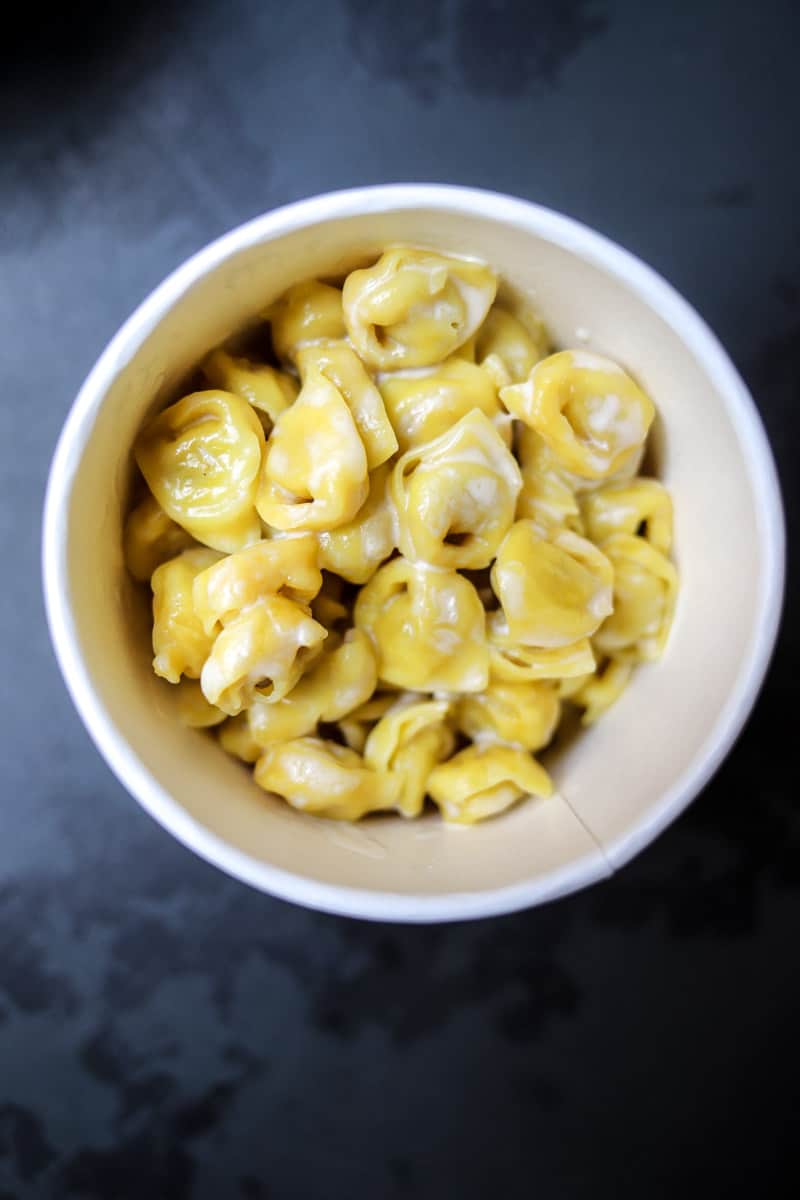 Botte Portici is a great fast-casual option in Bologna if you want signature Emilia-Romagna pasta near the center of the city. There’s a very corporate feel to the restaurant with branded containers and buzzers for food pickup, but that shouldn’t stop you from ordering the tortellini, tortelloni, gnocchi, or any of their delicious handmade pasta for lunch or dinner. Delicious food and quick service if you need a quick lunch stop. 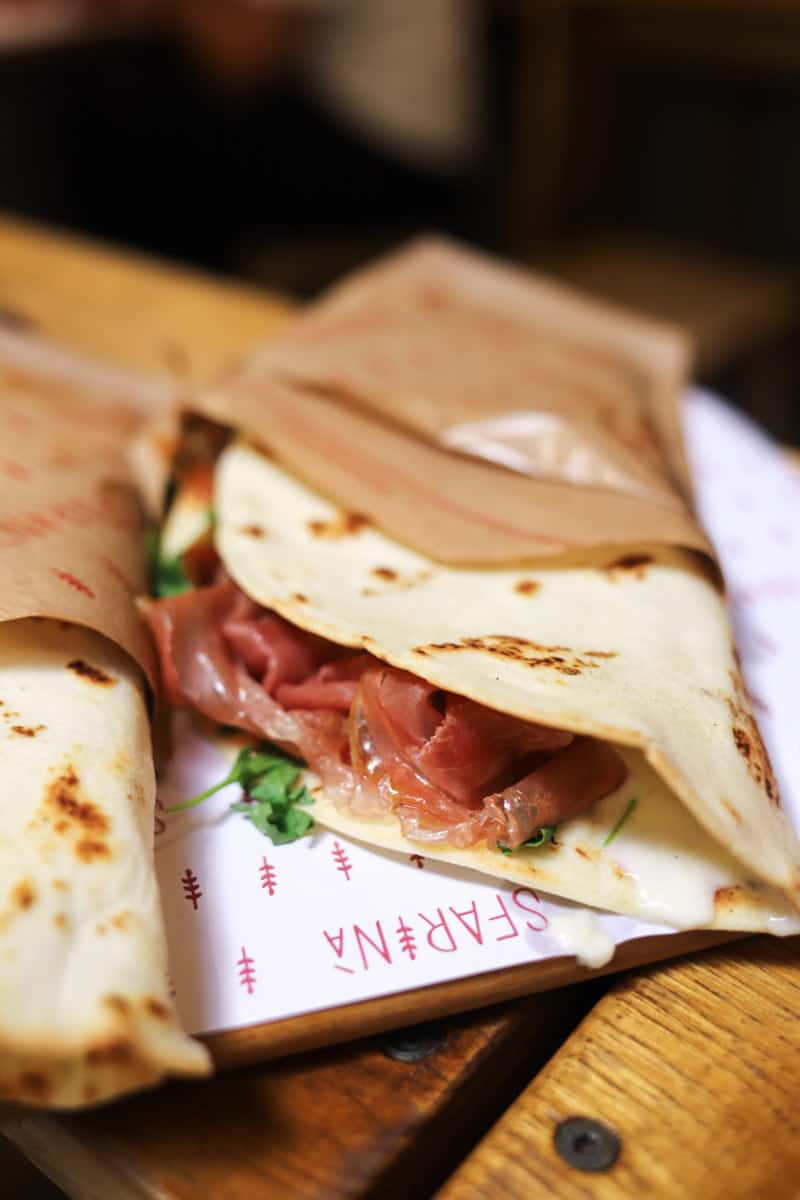 Bologna has no shortage of markets, and while they each have their own individual personalities and charm, our very favorite market is Mercato delle Erbe. Situated in the hustle and bustle of Bologna on Via Ugo Bassi, this market is a treasure trove for food lovers with dozens of food stalls filled with fresh produce, local specialties like mortadella and balsamic, and fantastic local restaurants.  We’ve yet to have a bad meal here but our favorite of these small-scale restaurants include MozzaBella for fantastic pizza by the slice, or Sfarina for a classic Bologna flatbread or piadina sandwich.

It will only take you a whole 5 minutes in Bologna to realize that this Italian city is obsessed with Mortadella. And no- this isn’t the “boloney” you grew up with. The beautifully cooked and cured pork meat is found in the inside of tortellini, on top of pizza, served alone with other charcuterie, and oftentimes between two slices of bread for a sandwich. If you’re looking for the best place to enjoy some local mortadella, make your way to Mò Mortadella Lab. They serve several varieties of mortadella and make all of their delicious, hearty mortadella sandwiches made to order! 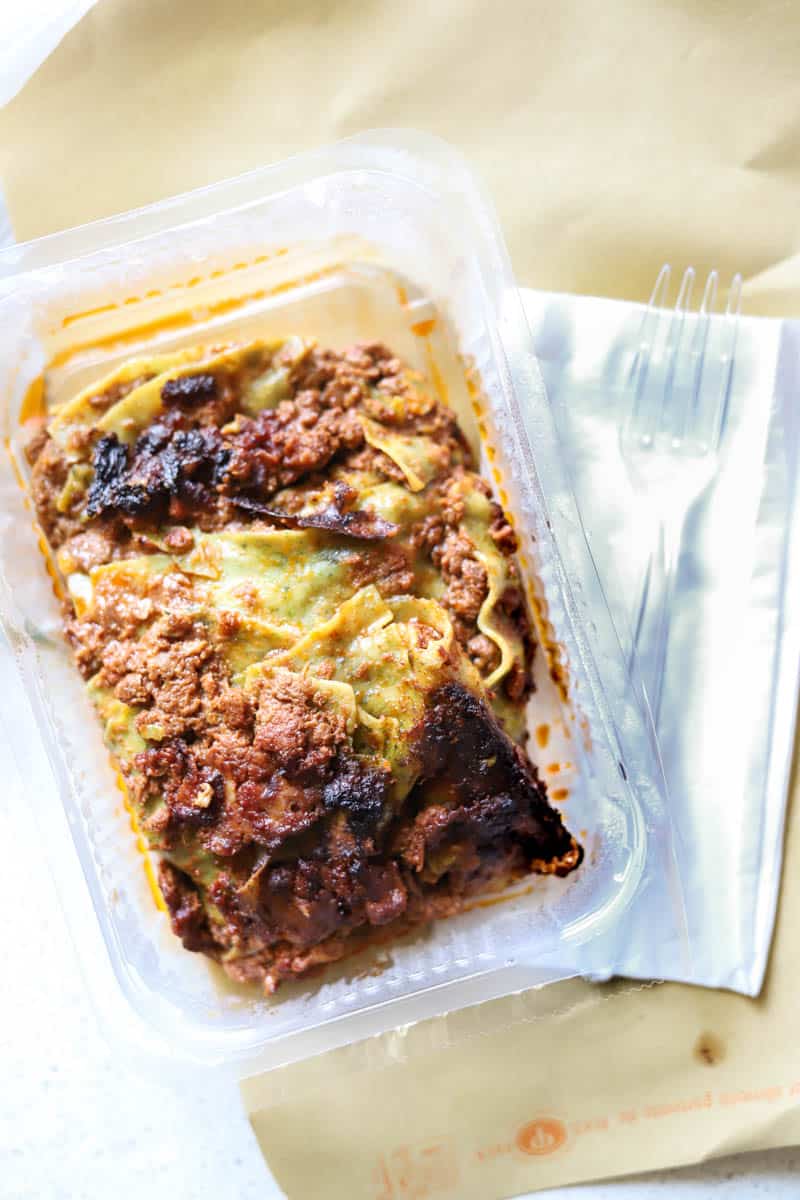 Bologna is a sea of amazing food, and there’s no shortage of great options for pasta, but if you’re looking for some of the best pasta in Bologna, then Pasta Fresca Naldi is a must! You won’t be sitting down here- this “restaurant” is takeaway only with several rotating pasta dishes including tagliatelle al ragu, tortellini alla panna, gramigna alla salsaccia, and lasagna. Perfect for a lazy evening or a picnic, Pasta Fresca Naldi makes some of the best pasta you’ll enjoy in Bologna. 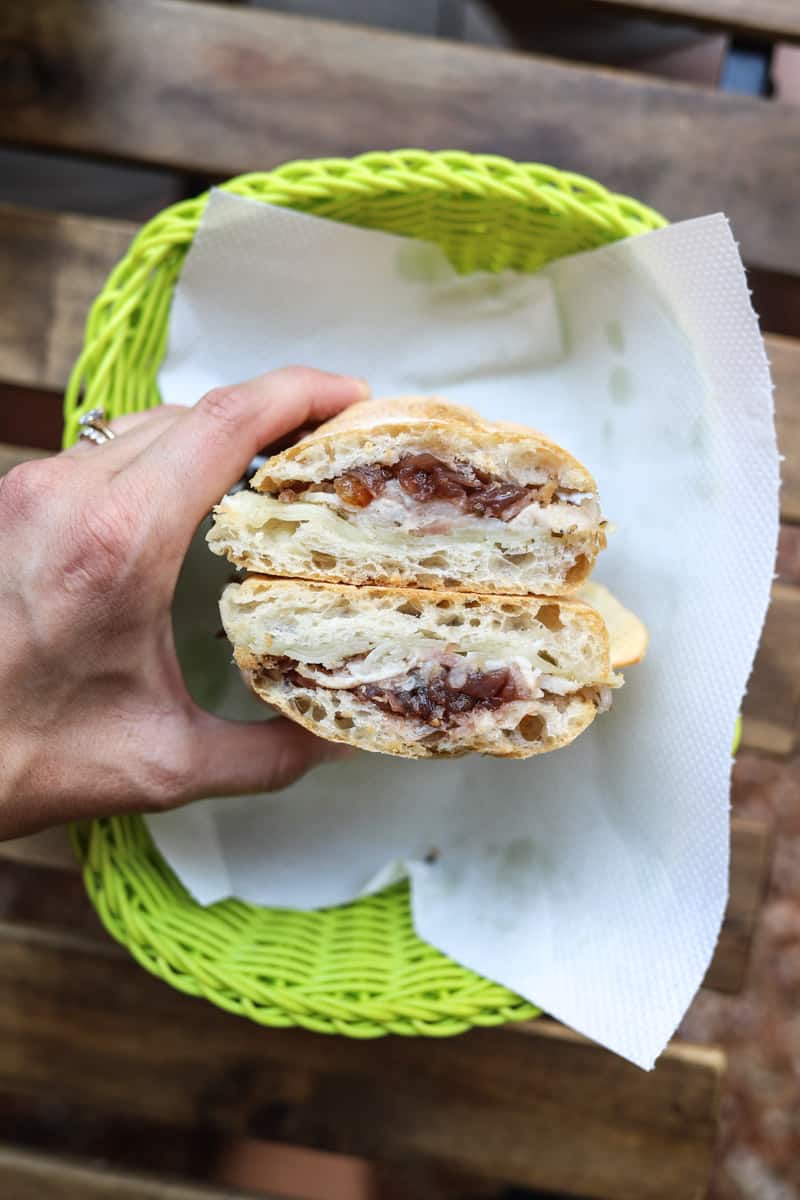 Ther are more options for pizza and pasta in Bologna than the human mind can conceive, but one of the best Bologna restaurants is Panini Di Miro and they serve absolutely killer paninis. Just a stone’s throw away from beautiful Strada Maggiore, this food stall serves some of the best sandwiches you will ever have. There are dozens of options but our very favorite panini is the panini with porchetta and caramelized onions. One bite and you’ll fall in love too. 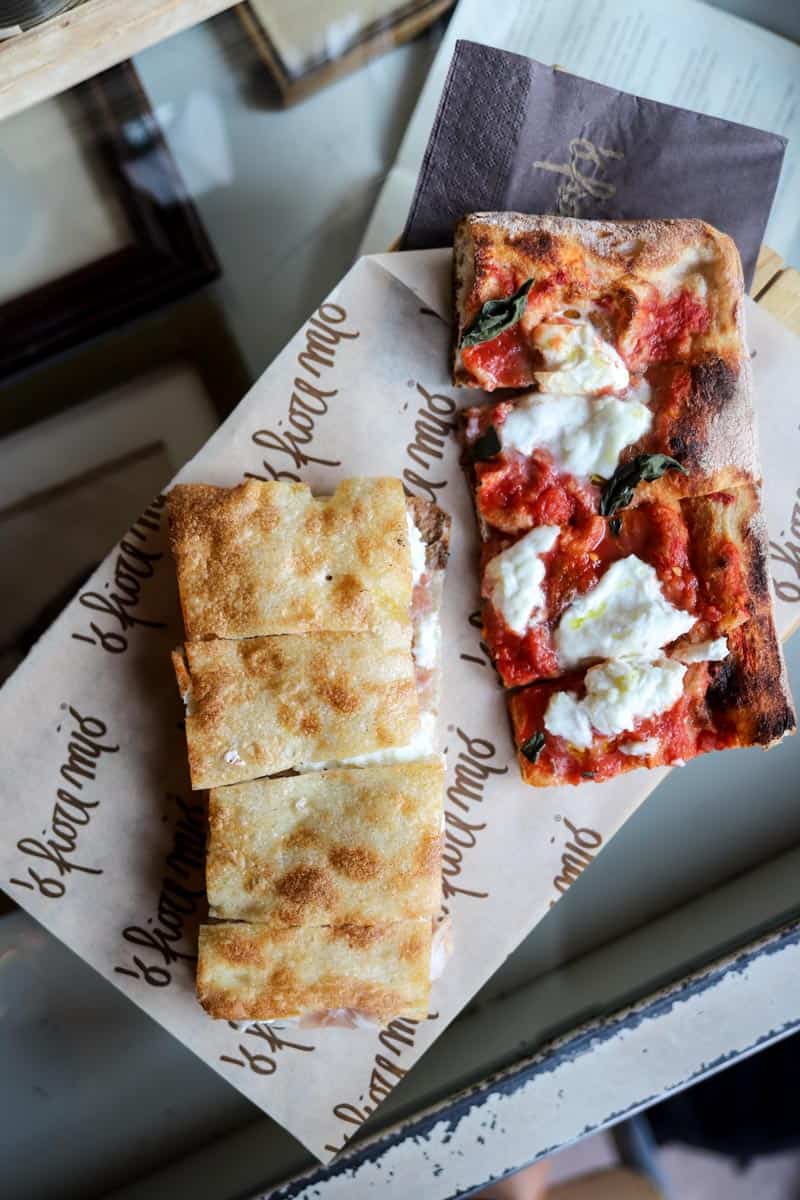 ‘O Fiore Mio is one of our very favorite Bologna restaurants for pizza. This pizzeria is a mini-chain in Italy that serves great pizza by the slice or entire pies made to order. The original location is in Faenza, but you can also find this pizza in Milan or Bologna as well. The crust is sourdough and it’s absolutely delicious, cooked in a wood oven for optimal flavor. Sample as many different types of pizza that your stomach will allow- you’ll pay per slice according to weight.  The simple tomato, basil, and mozzarella pizza is wonderful or try the mozzarella and prosciutto crudo for something a little more substantial. 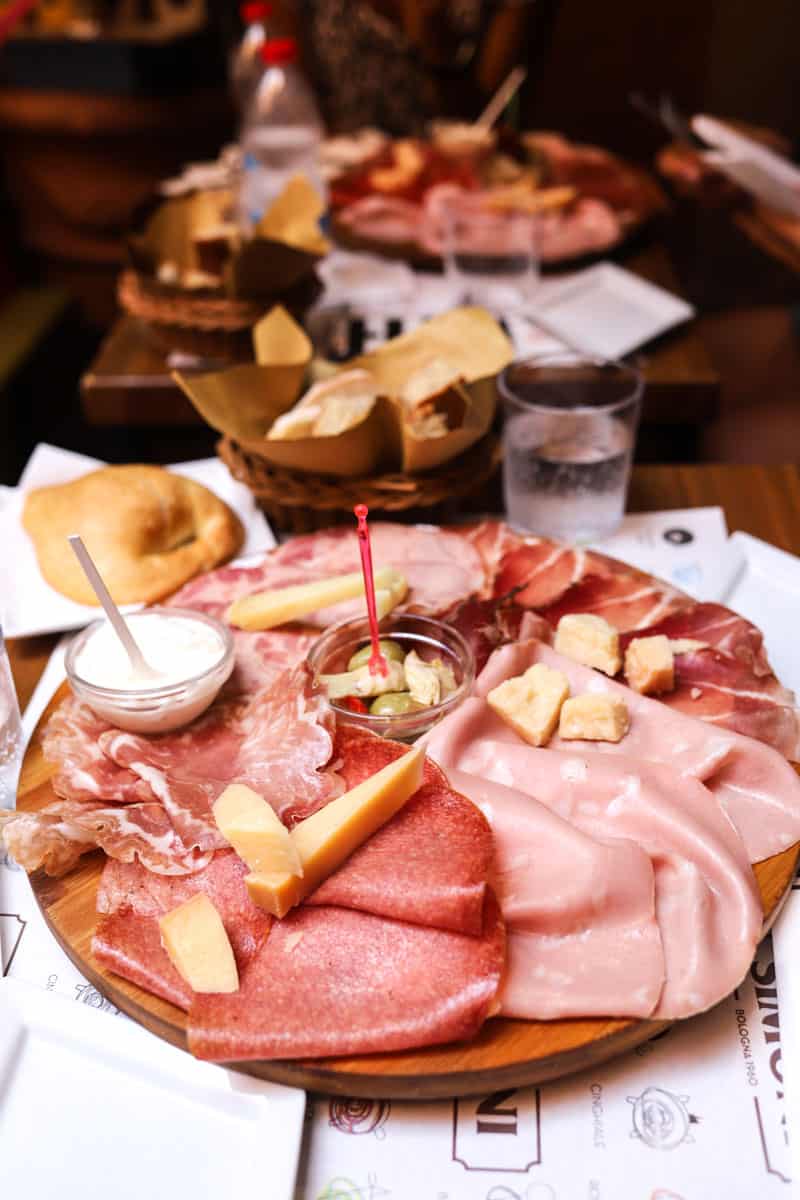 It would be a sin to tackle some of the best restaurants in Bologna without having a proper cheese and charcuterie tasting. In fact, at Salumeria Simoni you can make an entire meal out of gourmet meats and cheeses from bologna and other parts of Italy. The salumeria makes their mortadella in house and you can taste the amazing quality and attention to detail in every bite. Visit their restaurant Simoni Laboratoria (just a couple doors down from the salumeria) for lunch or a pre-dinner snack and order one of their charcuterie and cheese boards. The quality and flavor of everything from the parmigiano reggiano to the mortadella to the pecorino will stun you. 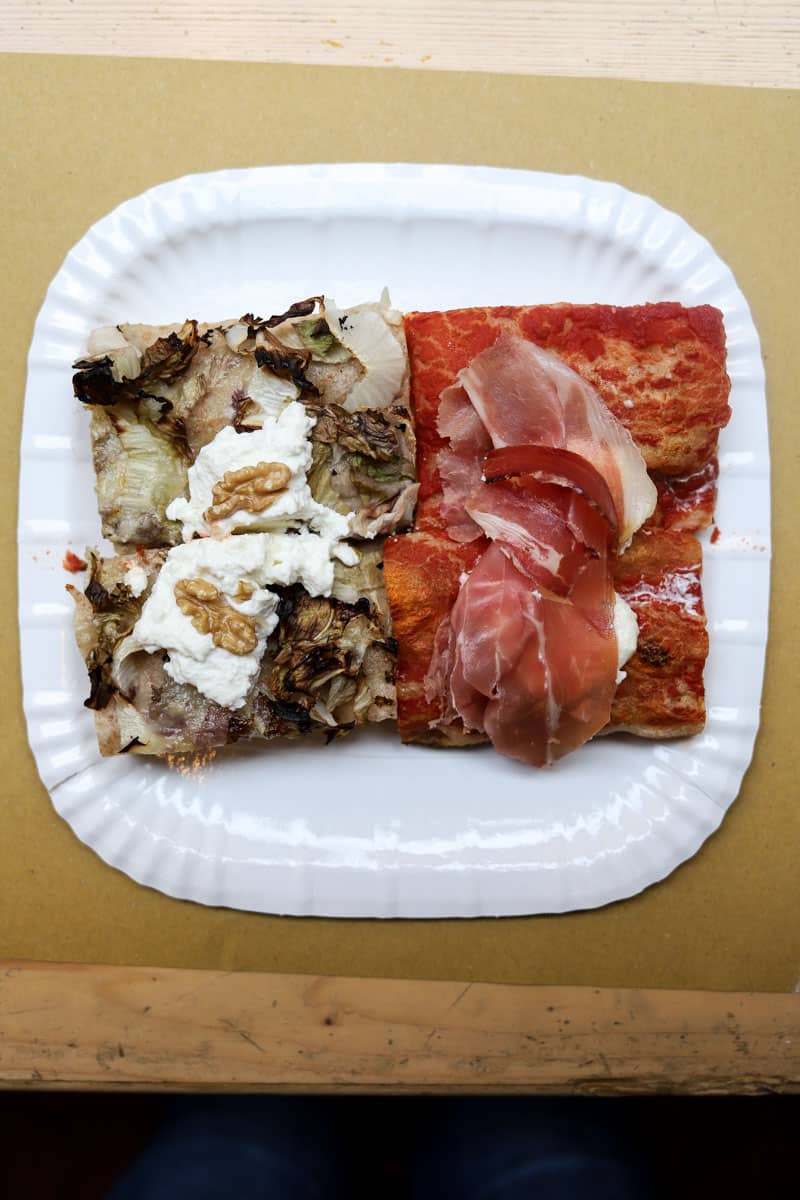 MozzaBella is our top pick for Bologna restaurants when you’re looking for the best pizza in town. Located both on the buzzing street of Via del Pratello and inside Mercato delle Erbe, MozzaBella makes killer pizza with rotating flavors like prosciutto and fig, tomato and burrata, or radicchio and walnut. The crust here is notably light and spongy- one bite and you’ll be hooked! 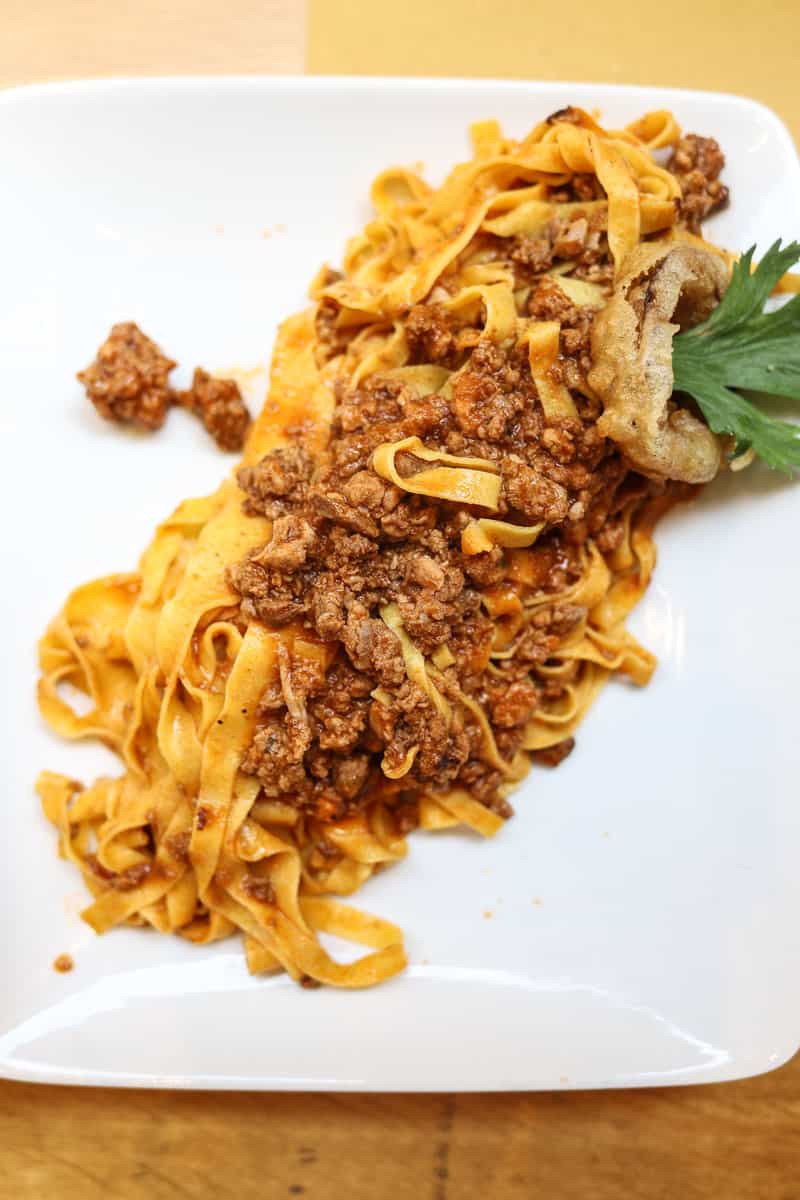 Sfoglia Rina is one of the best Bologna restaurants for fantastic pasta and an unconventional dining experience in Bologna. Arrive just as they open (the restaurant opens at 11:30) to snag a seat in this popular restaurant for lunch in the heart of Bologna. You’ll write your order on a piece of paper after observing a giant menu on the wall. You’ll be hard-pressed to find something you don’t like from here but our very favorite dish is the tortellini with cream and parmigiano reggiano with the tagliatelle al ragu (pictured) and the gramigna alla salsiccia at a close second. And if you’re sad when the meal ends because the pasta was that good, make your way over to the beautiful glass display of handmade pasta near the entrance and purchase some tortellini or lasagna for takeaway. 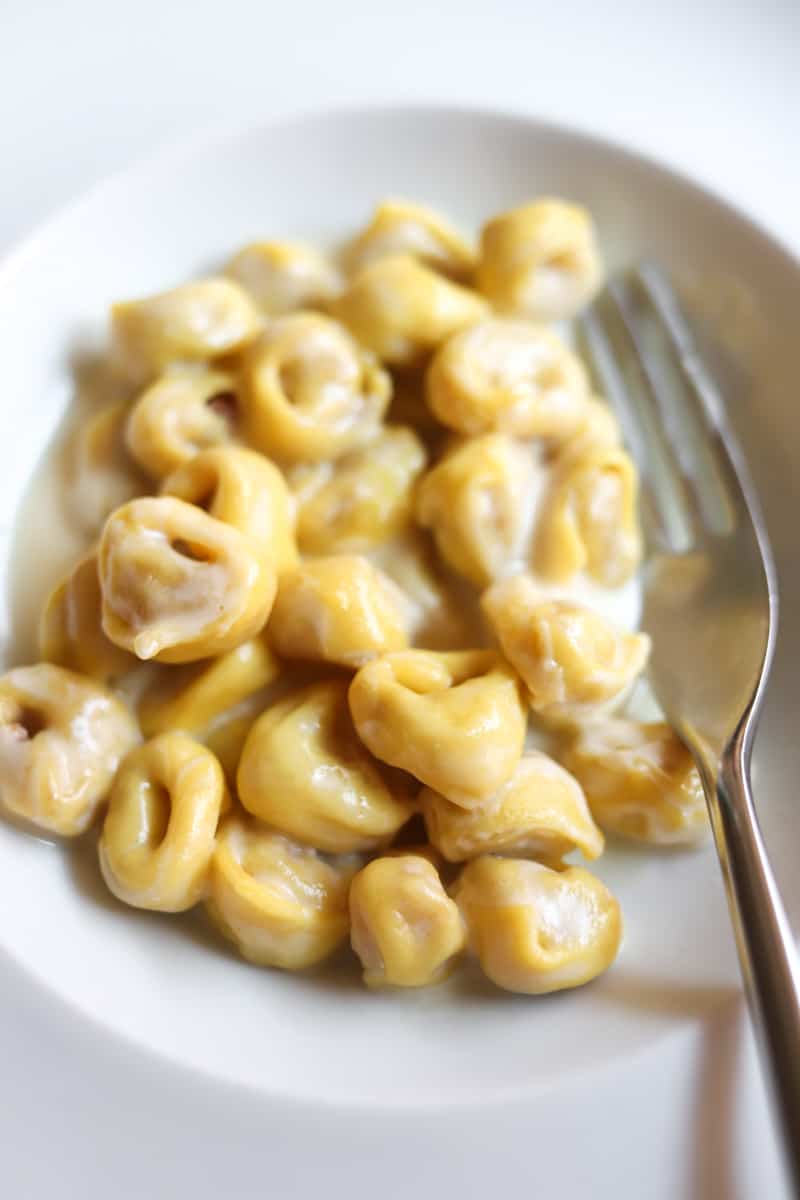 Oltre is the restaurant you want to come to in Bologna when you the comfort and nostalgia of traditional Italian dishes but you also want something different, new, and fresh compared to all the other trattorias in town. The restaurant itself is upscale and chic, and the food is just as elegant and impressive. Menu favorites include the meatloaf roll (just trust us on this one), tortellini in crema di parmigiano, and the cotoletta alla bolognese. And whatever you do, say yes to the molten chocolate dessert. 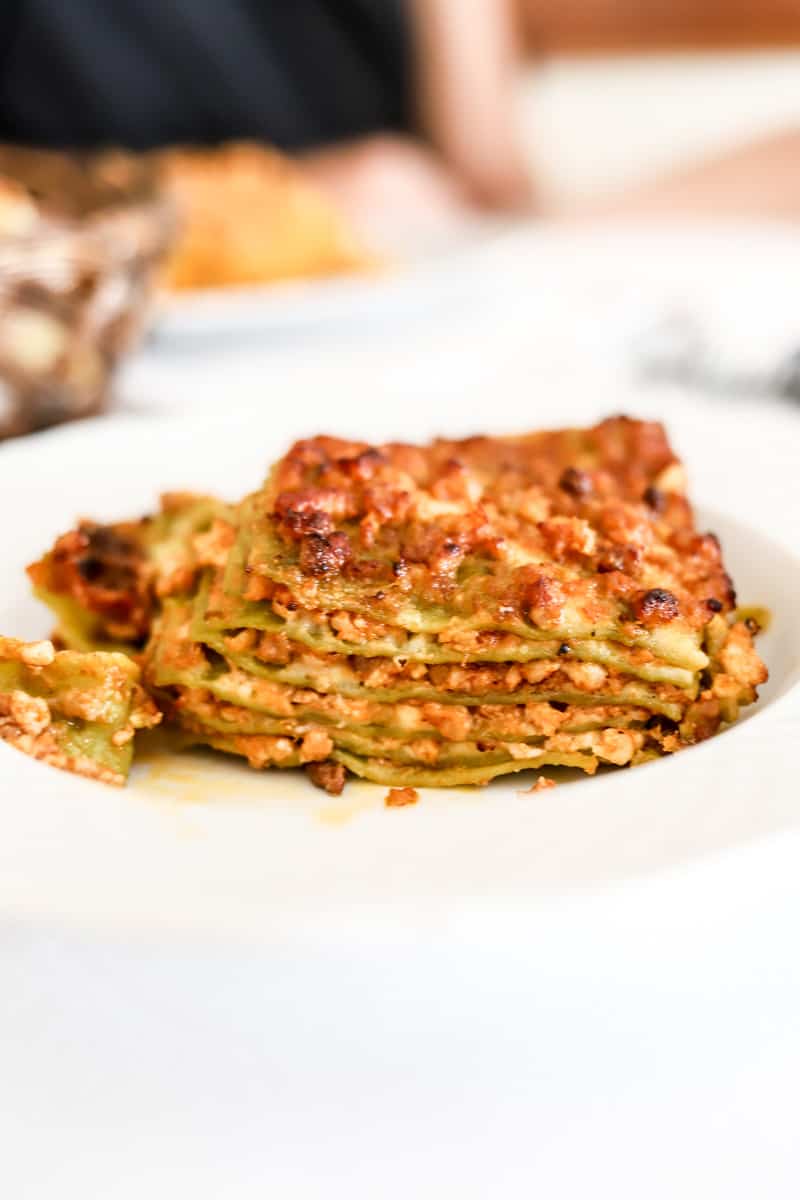 Le Golosita Di Nonna Aurora is your dream of having an Italian grandmother who cooks insanely great Italian food come true. This restaurant is Italian comfort food at its finest with heart-warming dishes that have incredible flavor and set themselves apart from other Bologna restaurants. Le Golosita Di Nonna serves our very favorite lasagna in town and is also one of the very best Bologna restaurants for tagliatelle al ragu. Don’t let the less than charming location detur you- this is one of the best restaurants in Bologna! 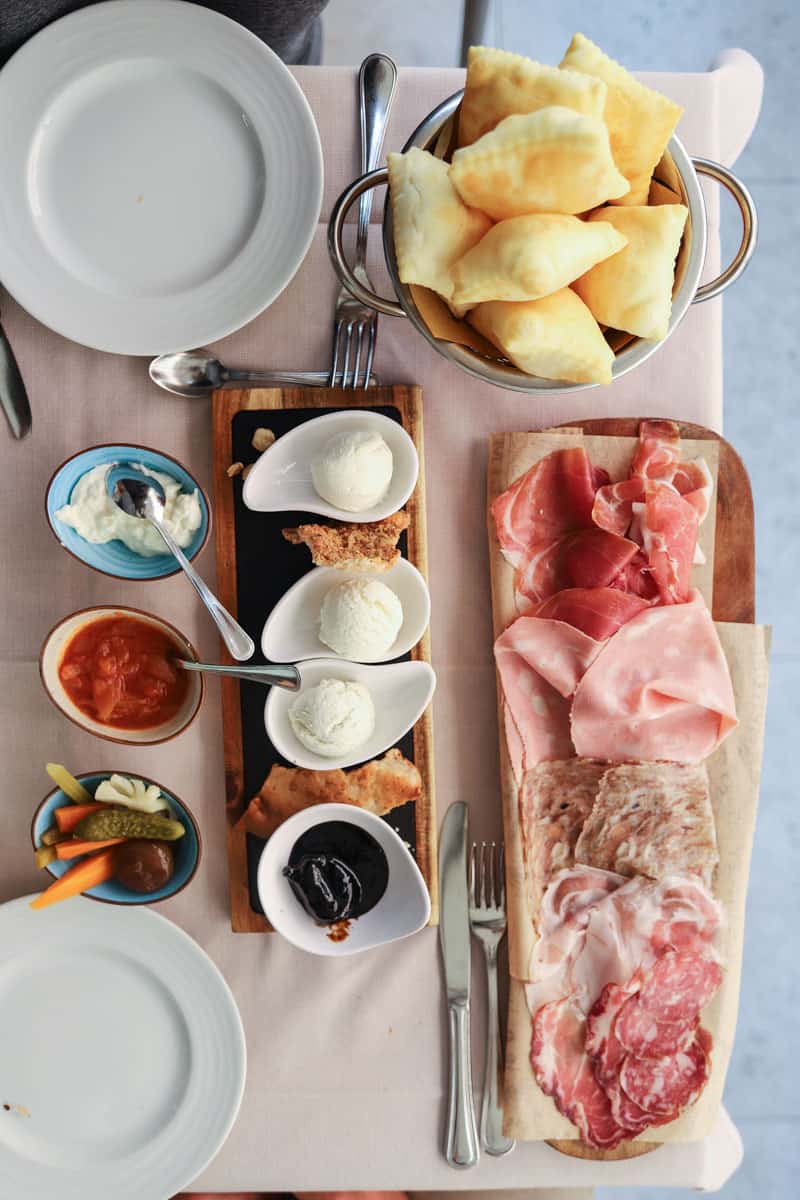 Trattoria da Me is one of the best restaurants in Bologna for so many reasons. First and foremost, they serve the best crescentine & cold cut platterr in all of town. The fried crescentine is fluffy and made to order- the perfect companion to the fresh meats and cheeses you’ll be served including mortadella, prosciutto crudo, salame, and squacquerone. And while you’re ordering the crenscentine appetizer the selection of cheese gelatos with fig jam is a MUST. Favorite pasta dishes include the totelloni with goat cheese, beets, and salmon, and the agnolotto stuffed with braised veal and a red wine reduction. And if you still have an appetite for the second course, the Guancia brasata al sangiovese with sauteed spinach and creamy potatoes is truly TDF. 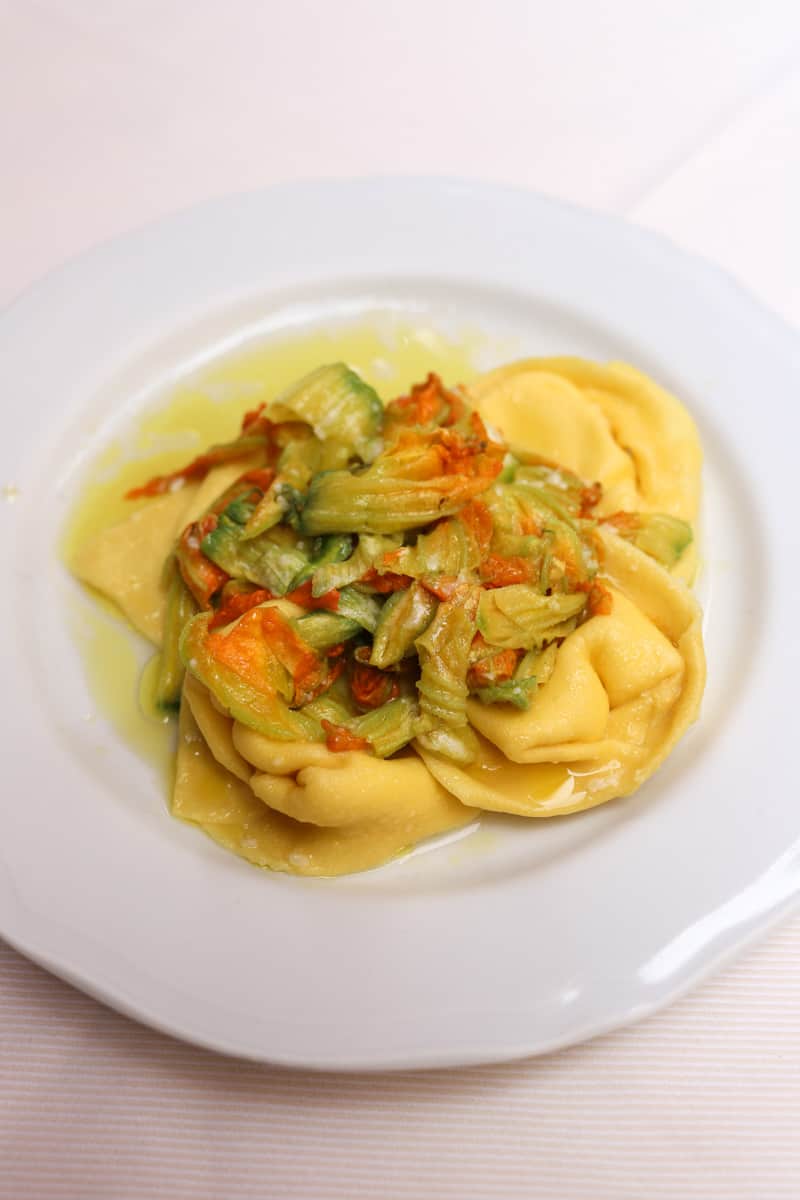 Drogheria Della Rosa is one of the absolute best bologna restaurants. Situated on Via Cartoleria, this restaurant boasts one of the best patio dining spots in all of town with intimate, beautiful outdoor seating beneath the porticos of Bologna. Regardless of atmosphere though, you’re here for the food. They don’t have physical menus here, rather they verbally recite everything on their menu, course by course. The pasta is the star of the show here and we recommend the tagliatelle al ragu for something traditional, or the tortellini with zucchini flowers filled with stracchino and squacquerone for something totally unique to Drogheria Della Rosa. The balsamic vinegar fillet has impeccable flavor if you’re looking to order a second course. 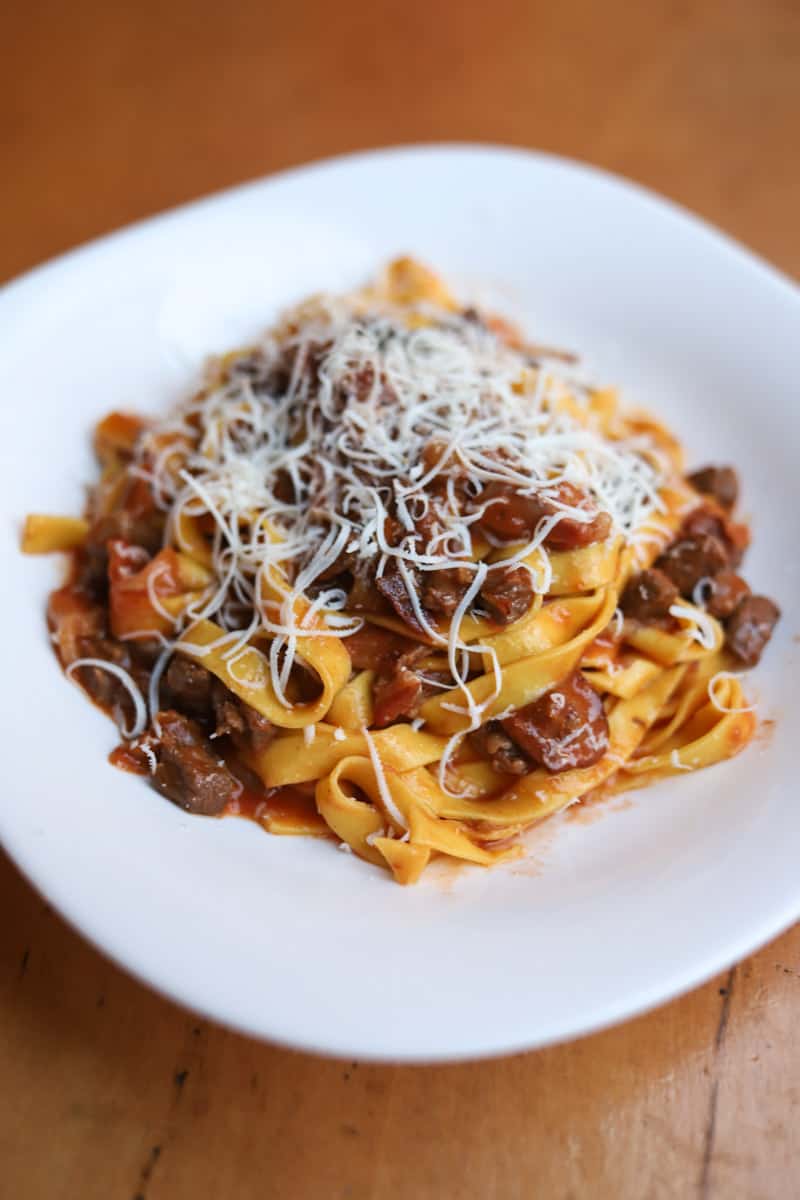 Vagh In Ufezzi is a magical family-owned restaurant and one of the absolute best restaurants in Bologna. As you walk into the restaurant, the comfort and authenticity of the establishment is tangible. The food here is traditional, classic Bolognese cuisine including dishes you’ll see regularily throughout town, and other forgotten classics. Vagh In Ufezzi is also one of the few Bologna restaurants that has revived the tradition of “daily cooking” with different specials specific to each day of the week (Monday: friggione, Tuesday: gramigna with sausage, etc.).  Take your time here for a long, thoughtful, drawn out meal filled with crescentine and cold cuts, handmade pasta dishes, meat and fish entrees, and of course- dessert. Bonus points for fantastic music choice. 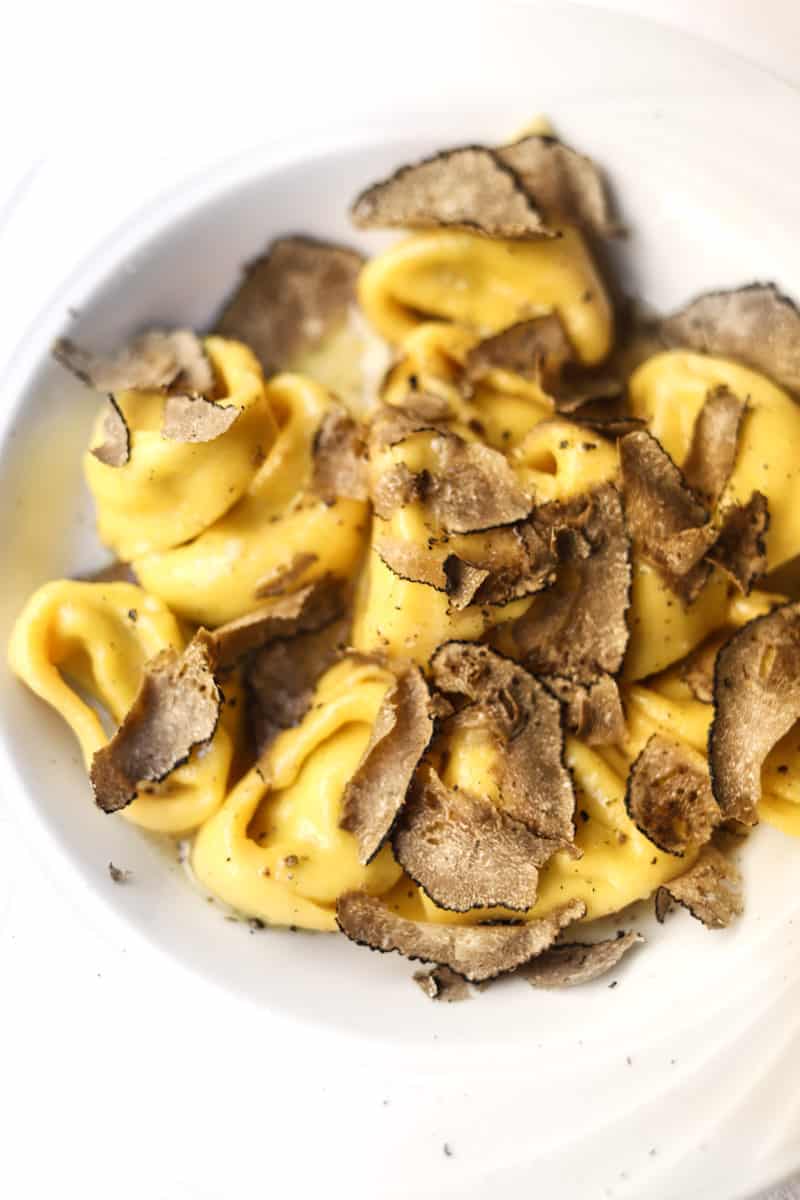 Da Cesari is everything you hope for in an amazing Italian restaurant, and if we could only dine at one of our favorite Bologna restaurants, this would be our pick. The food here is insanely delicious, the environment is homey but still elevated and special, and the service is warm and inviting. Everything you order here will knock your socks off, so make sure to come with a friend or two and a good appetite. Start with their assorted plate of regional cold cuts including mortadella, prosciutto crudo, and salame. For pasta an absolute must-order is the gramignone verde al ragu di salsiccia, curly small green maccheroni with sausage sauce. The flavor of this dish is truly incredible and one of the best you can find in all of Bologna. And if it’s truffle season (summertime) order the tortellone with ricotta and black summer truffle.  Clean up all of your extra sauce from your pasta with copious amounts of their amazing homemade bread and if you have room for dessert, the “dessert tasting” is one of the best dessert samplers you can find in town.