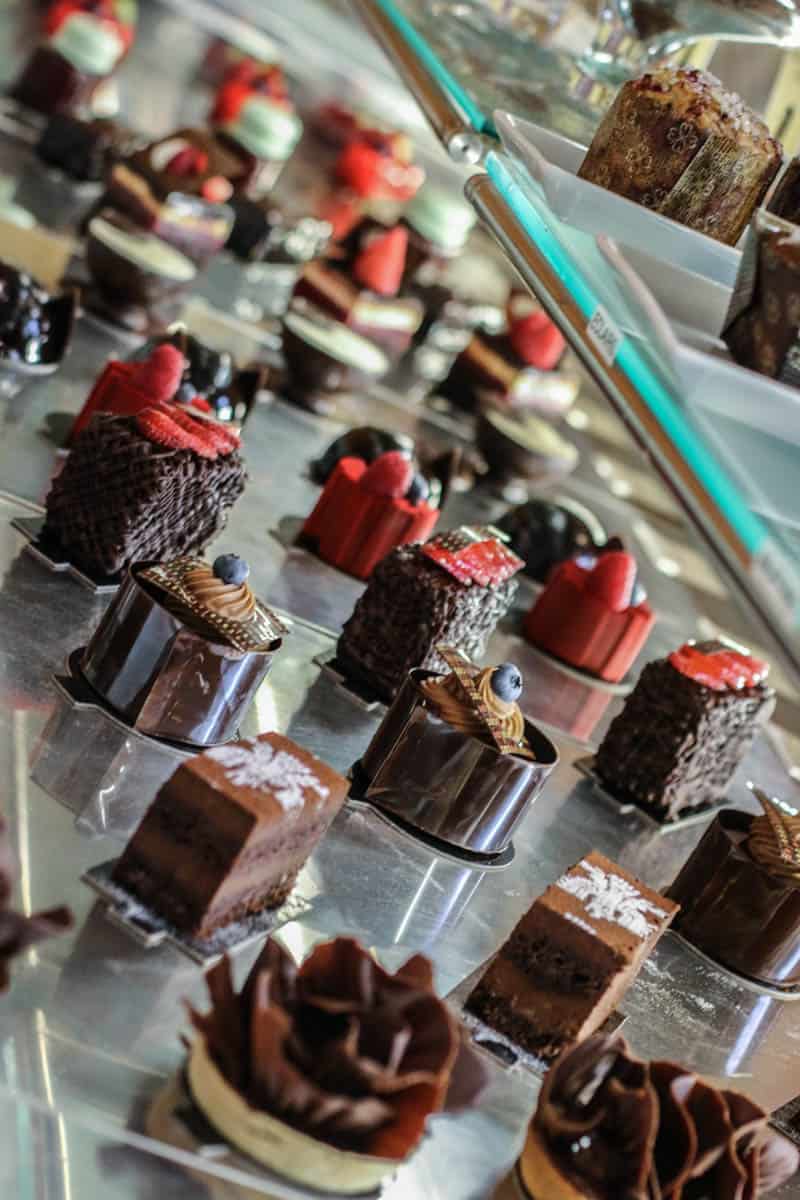 Pin It
at-el-ier: a workshop or studio, especially one used by an artist or designer. If you love chocolate as much as I do, Atelier Ortega is the best type of workshop imaginable. It’s the studio of my hometown’s Master Chocolatier Oscar Ortega. Atelier Ortega (AO) is also a tiny 4-table café where I often go when I am looking for a quiet place to read and write. Hidden on a side street far from the iconic elk antlered arches of the town square, AO is off the beaten path trodden by tourists. It’s especially lovely to duck into the hidden chocolate shop at the height of the summer season for a cozy place to spend quality time with my laptop and sip on French press tea, or Ortega’s incredible signature Spicy Mexican Cacahuatl (drinking chocolate spiked with dried chilies). Because, really, what could be more inspiring to a food writer than working in a chocolate shop? 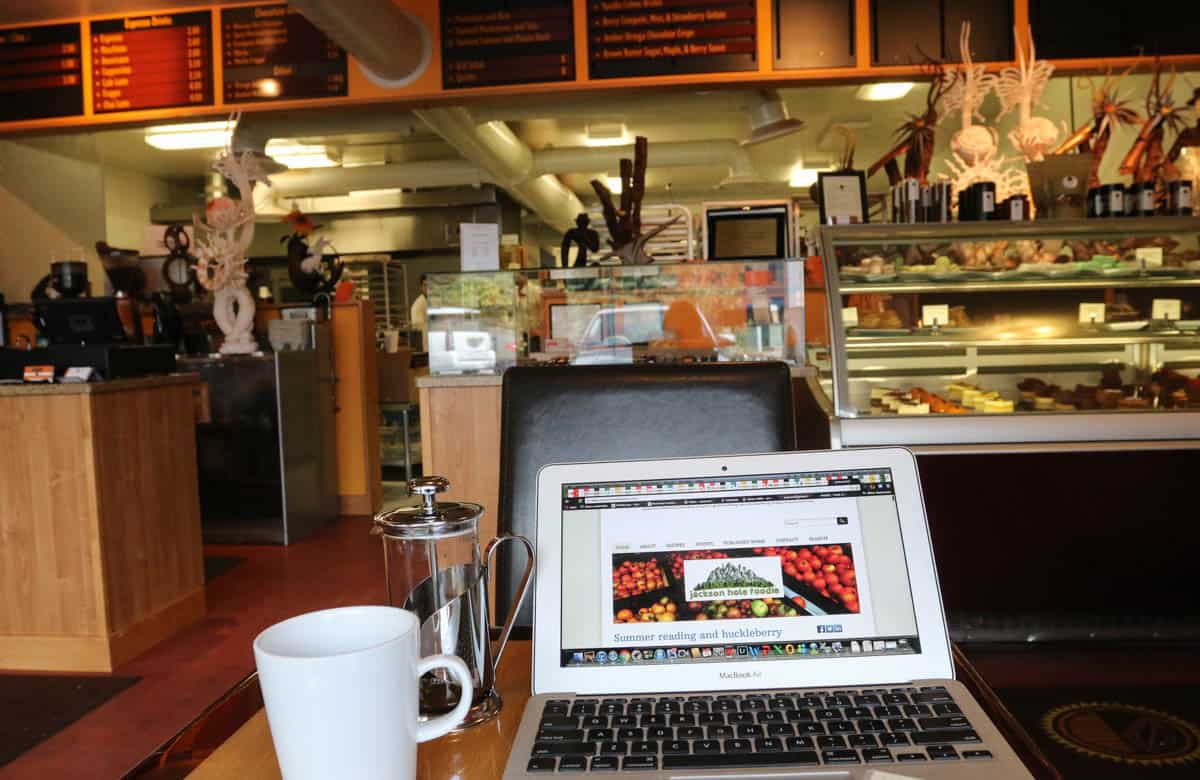 Pin It
When I say “Master Chocolatier”, I mean this is a guy who was given the title of World Chocolate Master in 2009, was voted Best Pastry Chef in America in 2011, won the World Pastry Team Championship in 2012, and was awarded Best Chocolates in the World by FIPGC (the International Federation of Ice Cream, Pastry and Chocolates) in 2015. When Ortega is not buzzing  around the globe competing (and usually winning) these high stakes contests involving elaborate, towering chocolate sculptures, he is perfecting his craft from this tiny studio in Jackson. 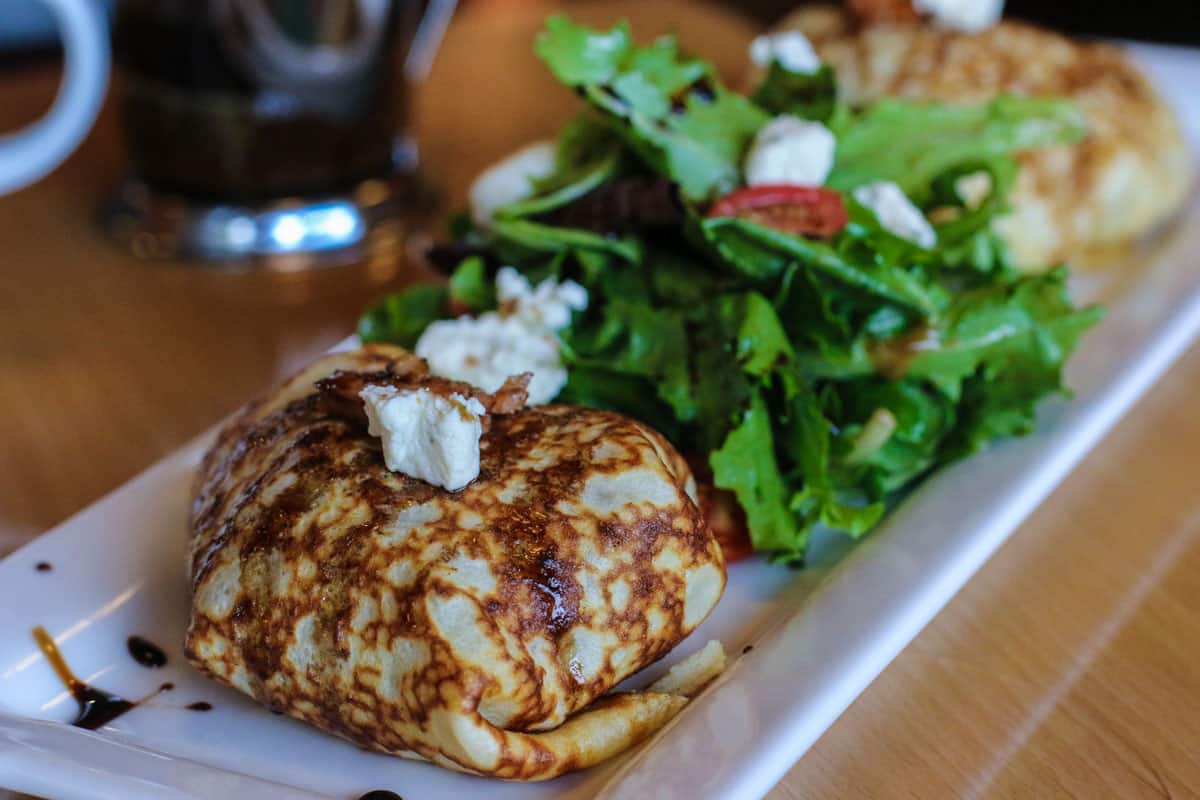 Pin It
AO is a regular stop for every chocolate lover I know to pick up a box of chocolates — his exquisite truffles make a fabulous gift — or treat themselves to a dessert from the display case. But not many realize that AO is the only  place in town to get authentic, homemade crépes, just like the crépes I ate out of hand on the streets of Paris. I have been taking my kids here for crépes since they were really, really little. Now that one is heading off to college and the other is off to boarding school, the boys and I had to stop in to enjoy some of our favorites from the AO crépe menu. 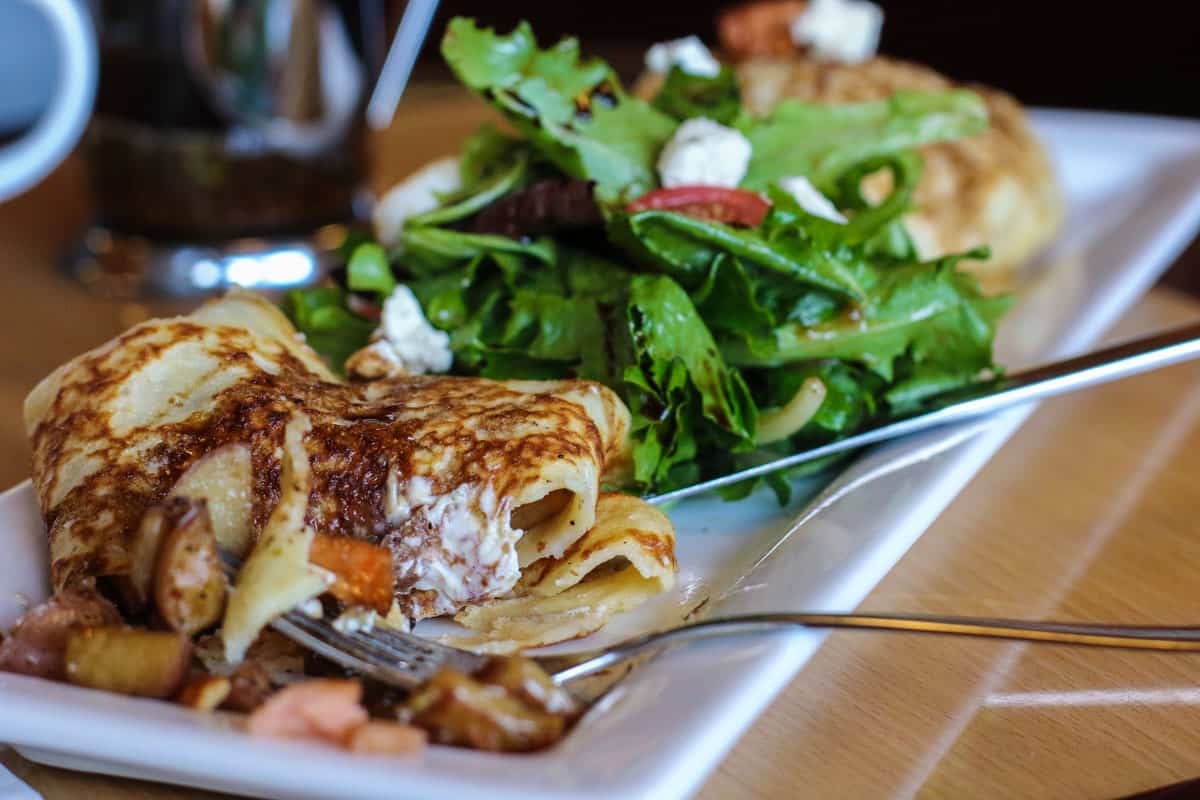 Pin It
I have never known my kids to order a savory crépe, but I love the one stuffed  Smoked Salmon and Potato Hash, with goat cheese inside and out, that comes with a very nice green salad. If I’m feeling even more virtuous, I’ll order the Roasted Mushroom and Tofu crépe. Both of these are hearty portions, but leave me with lots of room for dessert. Because hanging out at AO, is all about getting dessert. 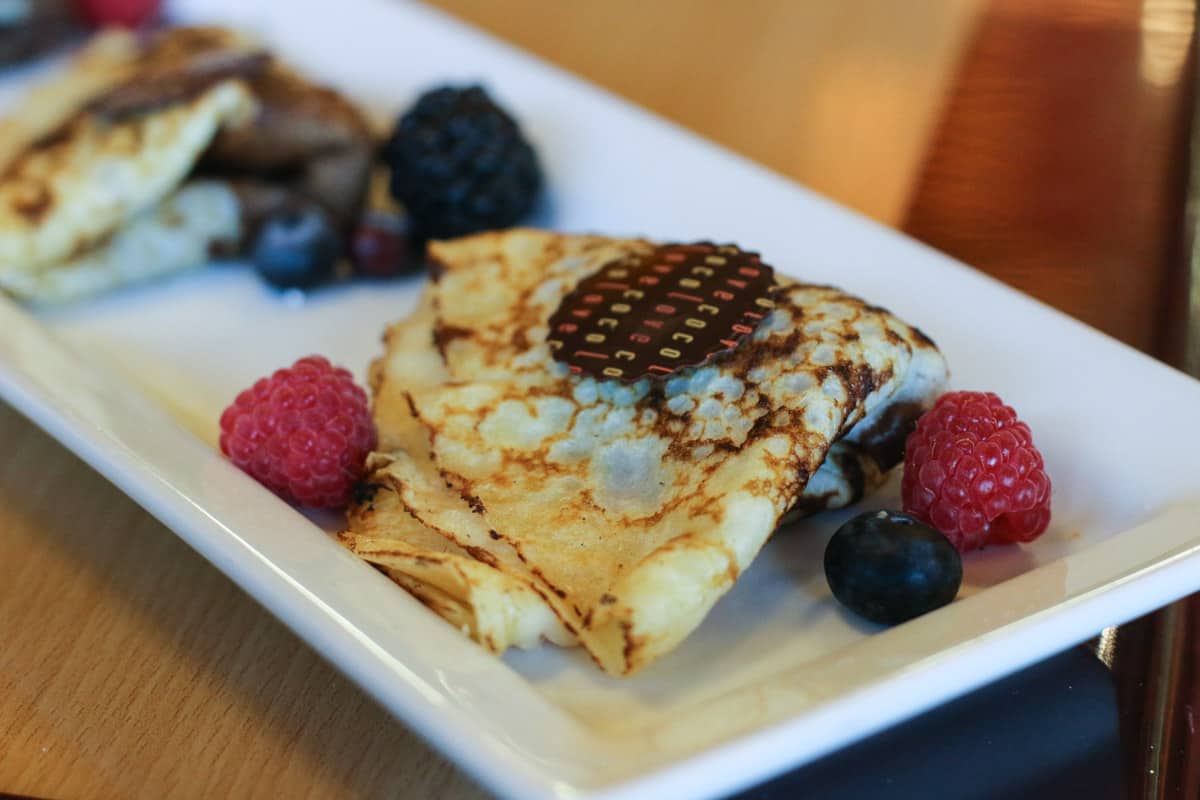 Pin It
When tackling the dessert crépe menu, the decision tree looks like this: Chocolate or Not Chocolate? If you are going for the Atelier Ortega Chocolate Crépe, which I highly recommend, you can be sure that this is no ordinary Nutella-drizzled, pre-fab plate of crépes. You will have to wait for what seems like an agonizing amount of time for the crépes to be made from scratch. They will come topped with housemade chocolate medallions, stuffed with a creamy chocolate filling, with perfect berries in season strewn about the plate. The AO Chocolate Crépe is always perfectly crisp on the edges, perfectly creamy on the inside, and the chocolate, as you may suspect, is out of this world. 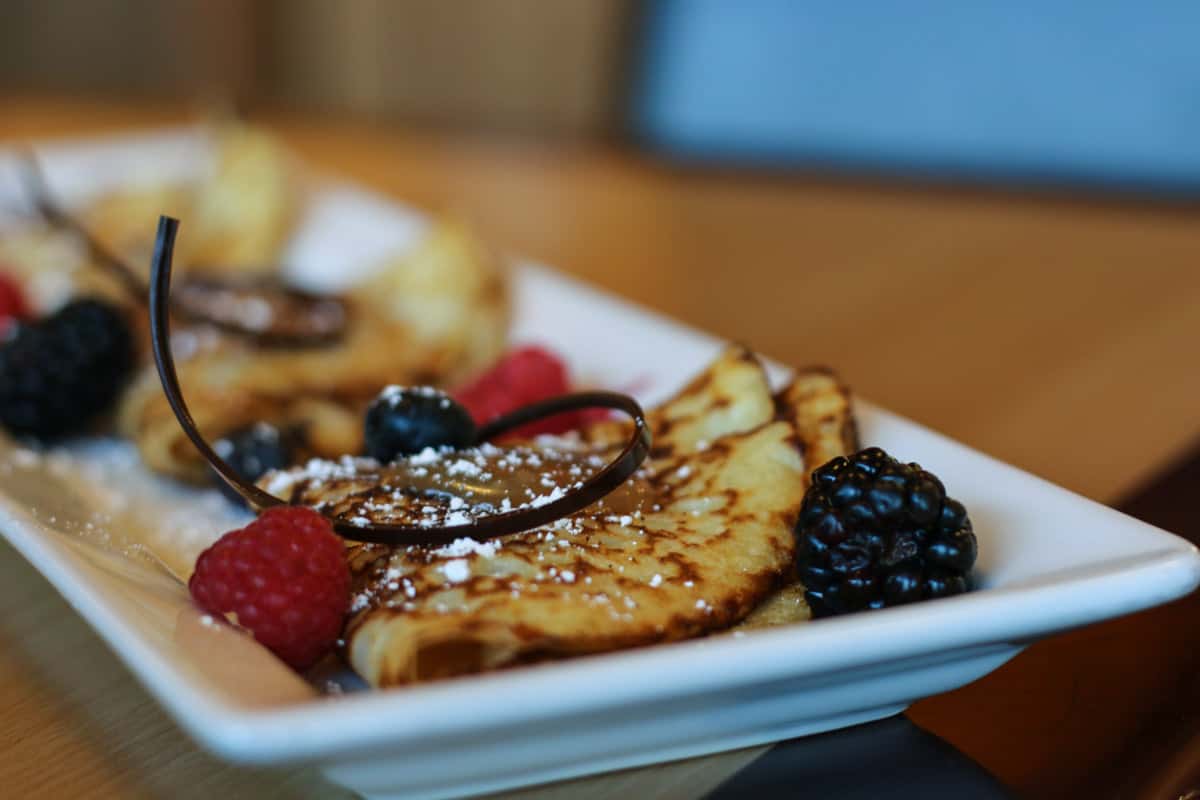 Pin It
I also have a thing for the other, not chocolatey, sweet crépes, like the Brown Butter Sugar Crépe with Maple and Berry sauce, and the one with Berry Compote, Mint, and Strawberry Gelato.

Speaking of gelato, did I mention that Ortega is not just a world champion chocolatier, but he is also famous for his gelato? In fact, in 2014 he won the Gelato World Cup in Rimini, Italy. One day last spring, I had popped into AO for my Spicy Mexican Cacahuatl fix and Ortega was working on his latest gelato creation in preparation for he Latin American World Cup. He waved me back into the kitchen to have a taste, explaining that the complexity of the cake, made of  three different textures of glacé (coconut gelato, mango semifreddo, and wild raspberry gelato) was likely to impress the judges. (It did; he won first place.) So when I tell you the gelato here is good, that is a grand understatement. 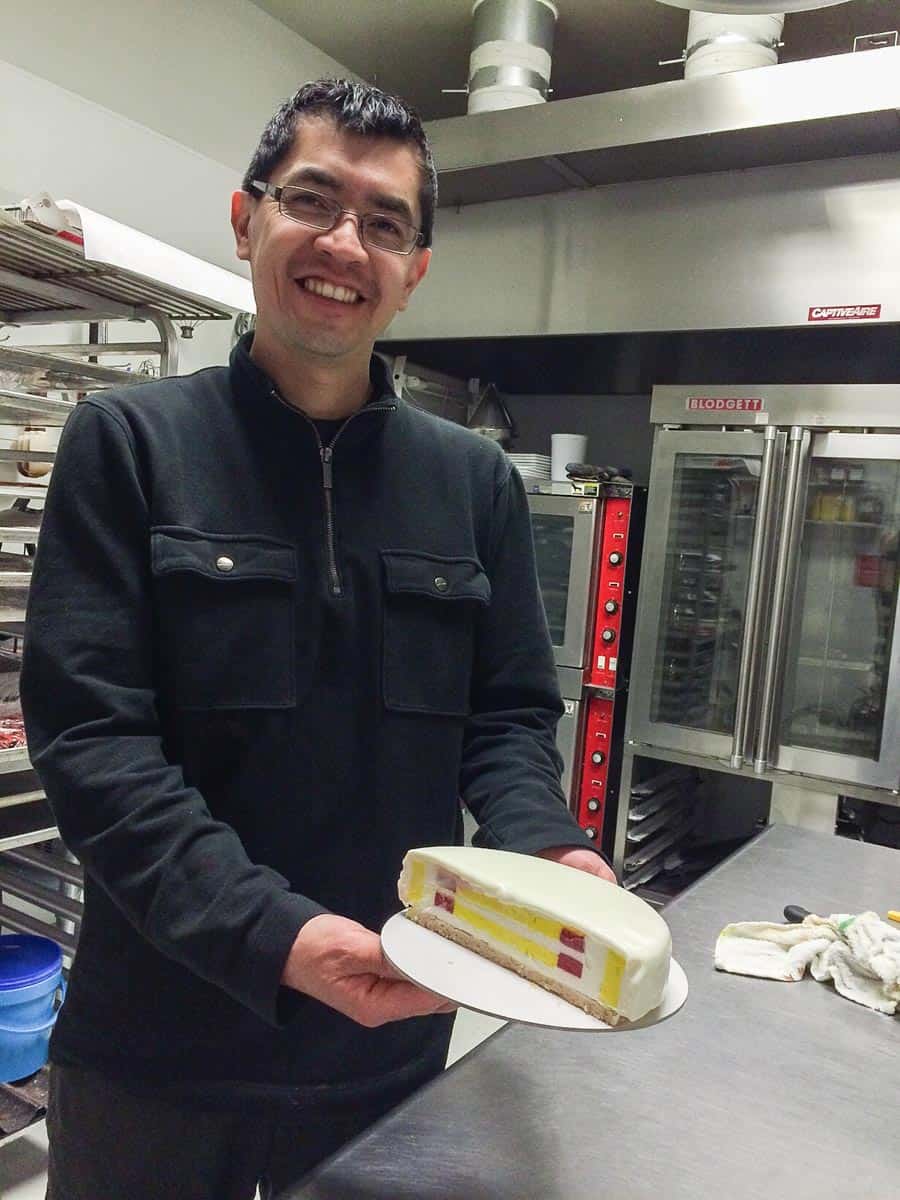 Pin It
Peering into the case full of chocolate truffles is one of my favorite things about hanging out at the AO. Even if I don’t sample one (which I almost always do), or bring home a whole box (which happens a lot), I love looking at the beautiful shapes and colors of the bonbons. Just reading the names of Ortega’s truffles is enough to snap me out of a writer’s block — Wasabi, Orange Caramel & Sea Salt, Cognac Milk, Vanilla & Lime, Passion Fruit, Goat Milk Caramel, Caramelized Ginger & White Tea, and my favorite — Chipotle Chili. 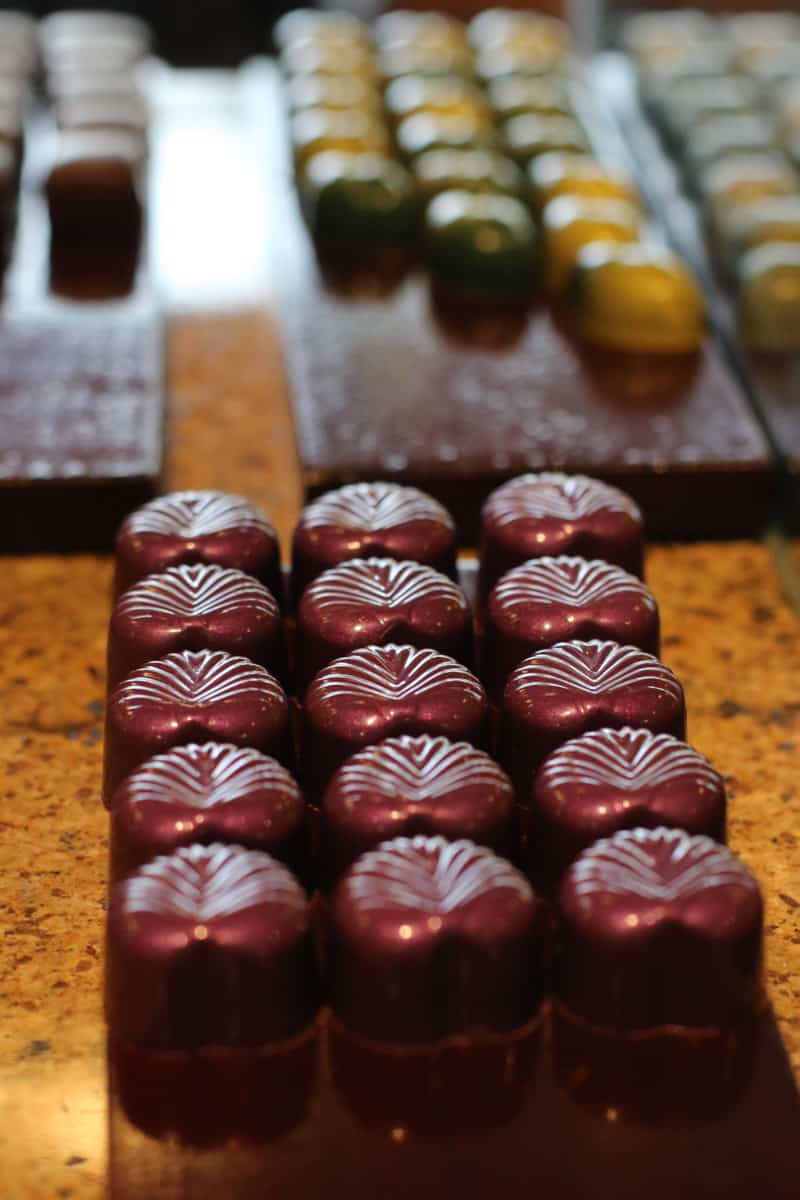 Pin It
If there’s room for dessert after all the eating of crépes and tasting of truffles, there are always some gorgeous petite gateaux (“little cakes”) to be had, each one a work of art. It’s hard not to choose a few of those to take home, along with something from the small but exquisite selection of vienoisserie — that category of French pastry made of yeast-leavened dough, who’s flagship pastry is the croissant. There is always a rainbow of macarons to choose from. And sometimes I find a loaf of cinnamon monkey bread  — you know, those buttery, pull-apart balls of brioche shaped into a loaf — calling my name from the case. 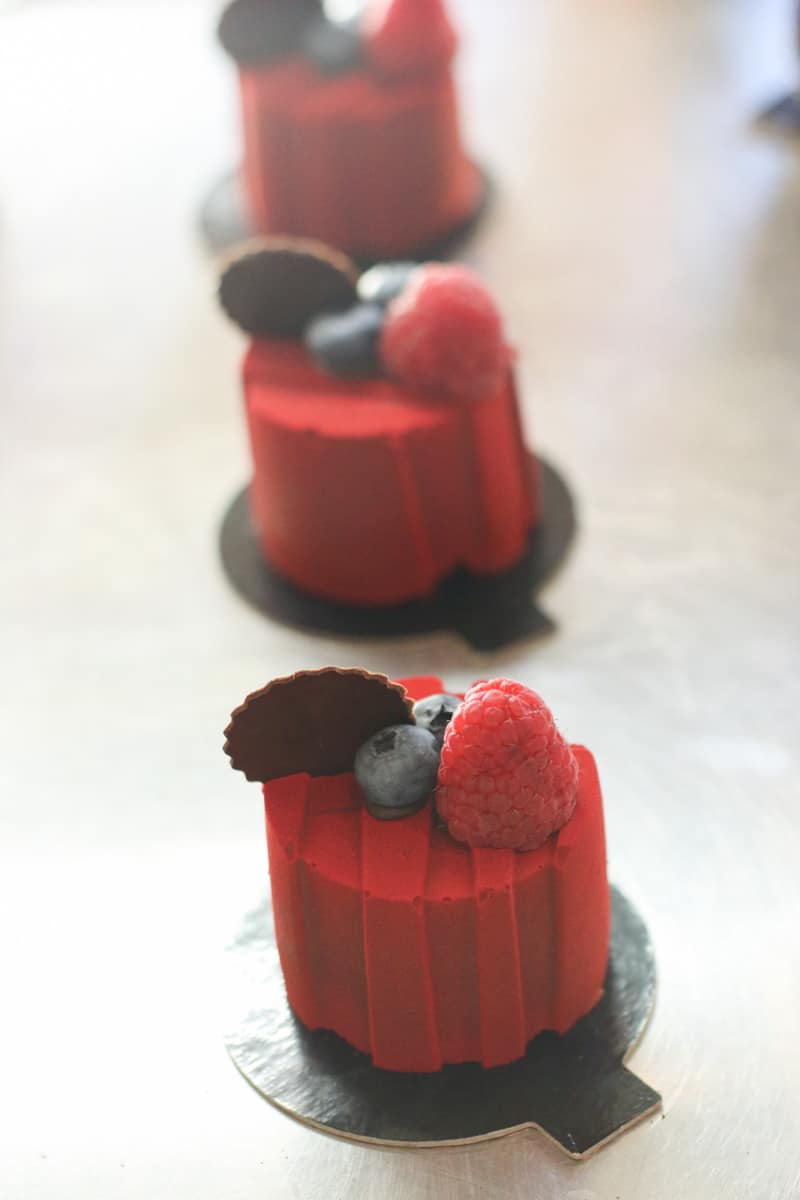 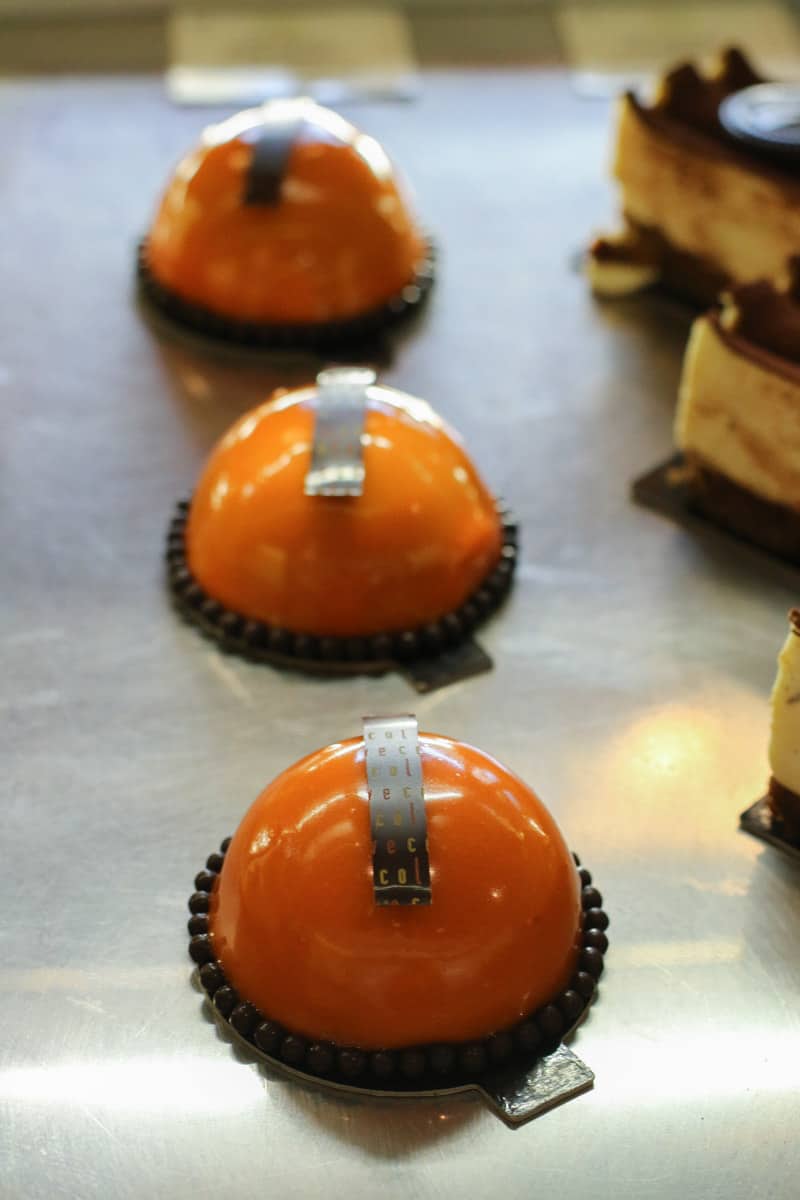 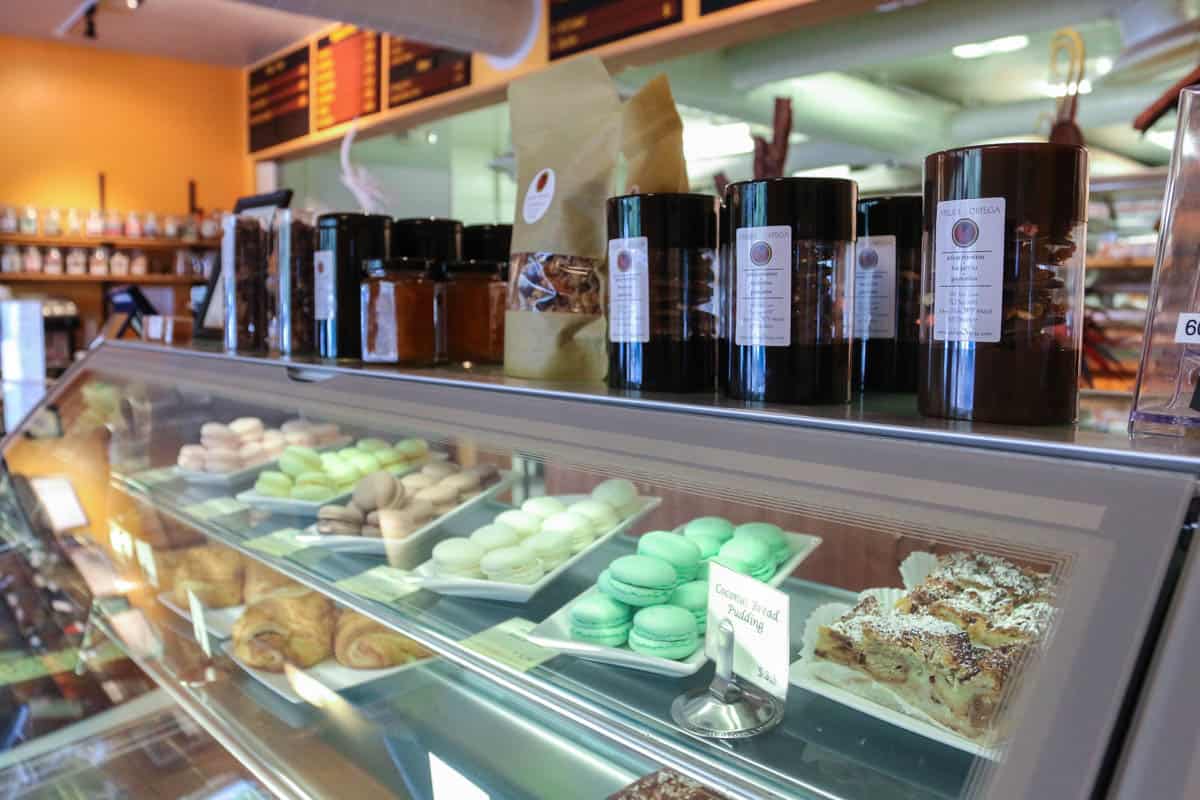 Pin It
Part of the beauty of Atelier Ortega is that is doesn’t look like much from the street. If you didn’t know about Chef Oscar Ortega and his little workshop in Jackson Hole, you would probably drive right by, missing out on all the discoveries, chocolate and otherwise, packed into the little shop. 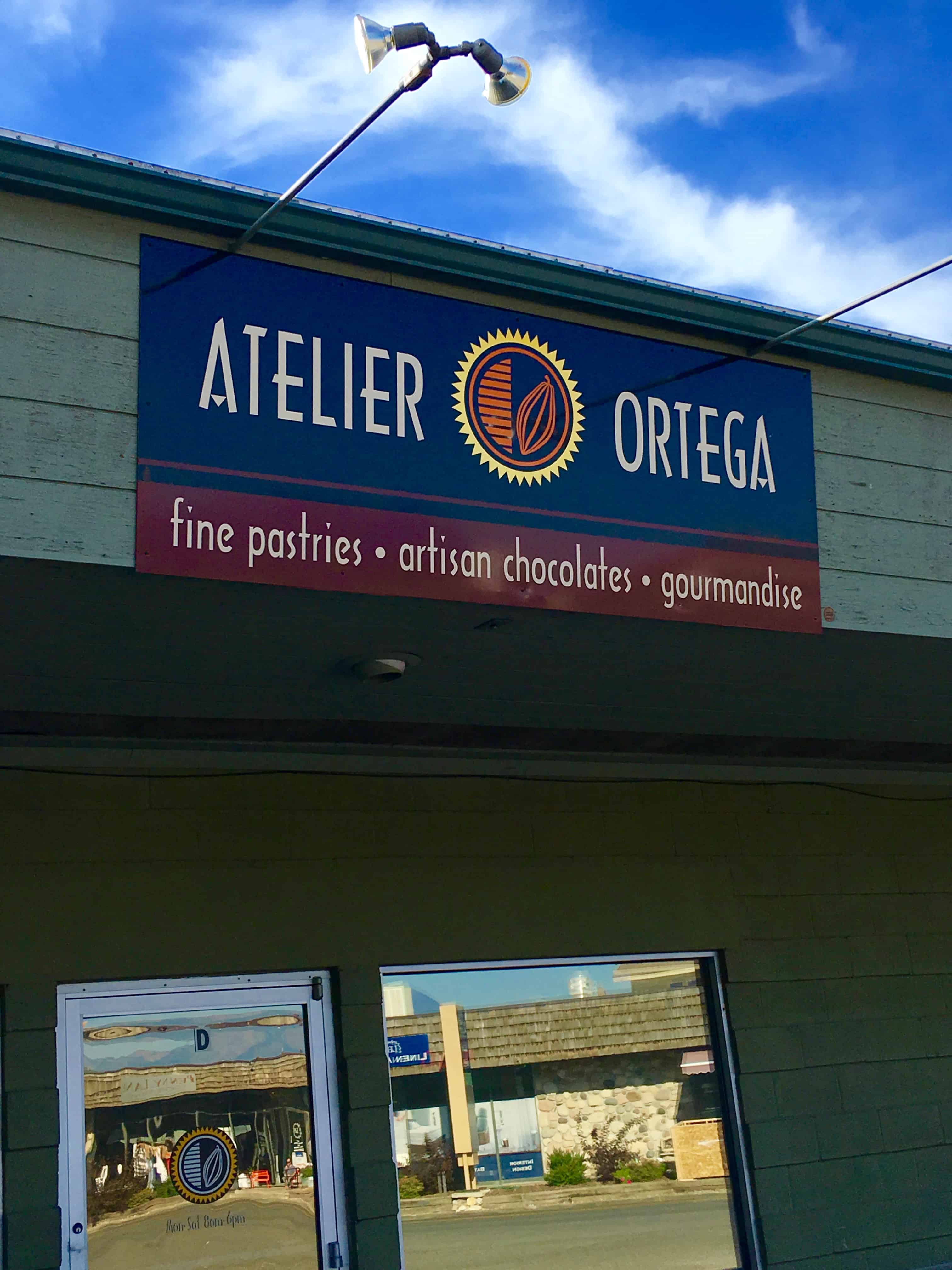 Pin It
Ortega has another chocolate shop/café in downtown Jackson across from the Wort Hotel. Just a block from the Town Square, it gets a lot of foot traffic and the tables are usually packed with visitors from all over the world seeking out good chocolate and coffee. It’s a little more snazzy than the original atelier, with a modern brown and orange decor, and serves most of the same exquisite treats Ortega makes at the Atelier. Except for crépes; you’ll need to seek out the original Ortega Atelier for those. 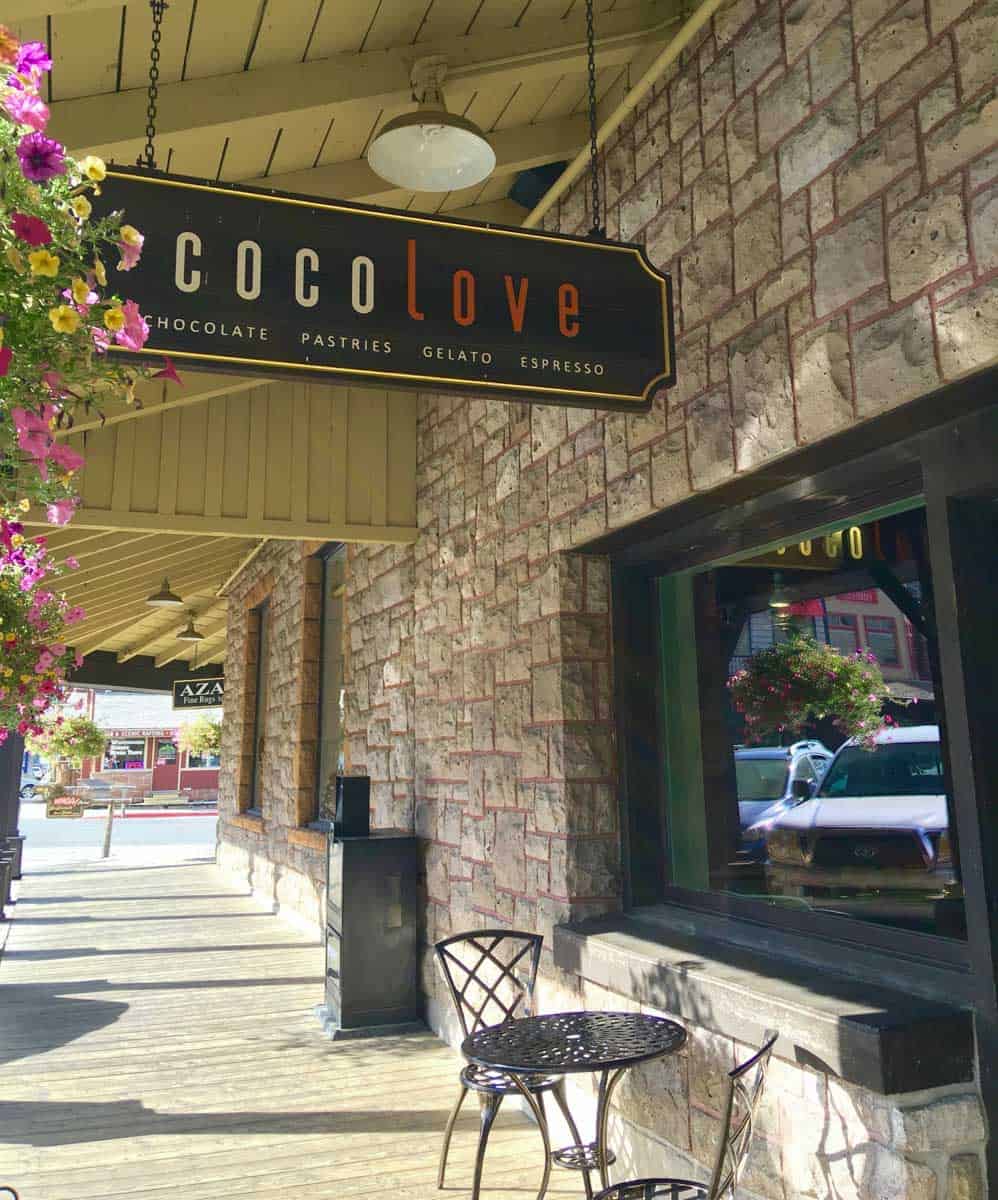