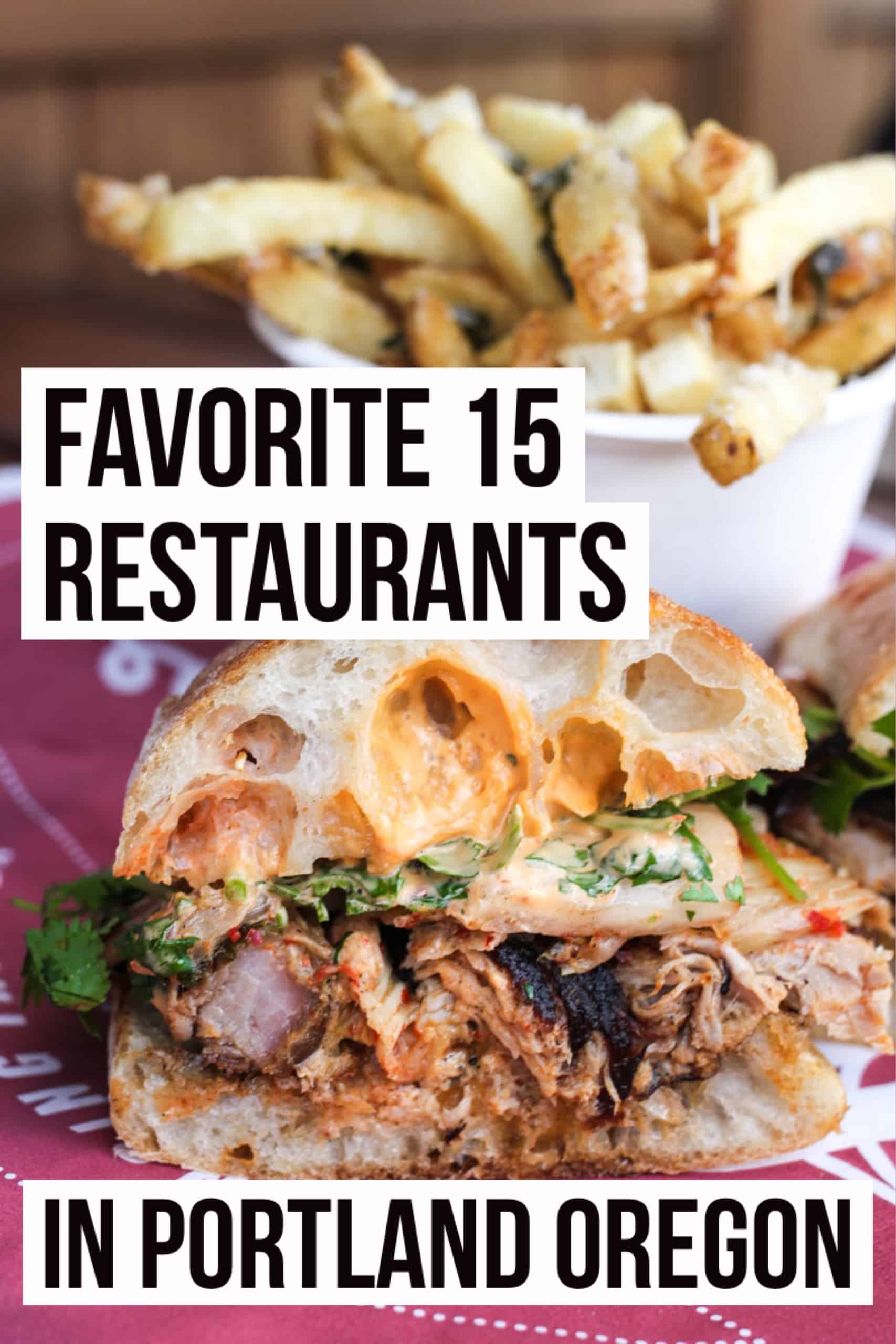 *Update: Although we still stand by these restaurant recommendations, we have since published an all encompassing, beautifully written and photographed list of the 40 best restaurants in Portland, and we highly recommend referencing this new post first and foremost. Happy reading!

It’s no wonder foodies from all over the country flock to Portland. In Portland there is an overwhelming abundance of local, innovative restaurants that you can’t find anywhere else. In Portland you could eat at a different food truck every night for just about two years (over 600 licensed food carts). In Portland there are more vegan/vegetarian options than any other city in the U.S. And in Portland we found, as the Female Foodie team, that some of the best bites we have ever had lie in this quirky city. Follow along with us, Brooke and Jenny- two members of the Female Foodie team as we share 15 of our latest top picks!

Life of Pie Pizza is a popular pizza spot for locals along the North Williams Avenue strip in southeast Boise district of Portland, Oregon. The pizza is wood-fired making the crust crispy on the outside and soft on the inside. The mozzarella cheese they use is my favorite part – so melty and thick. The picnic benches outside are perfect for this location to take in the relaxing aura of Portland. 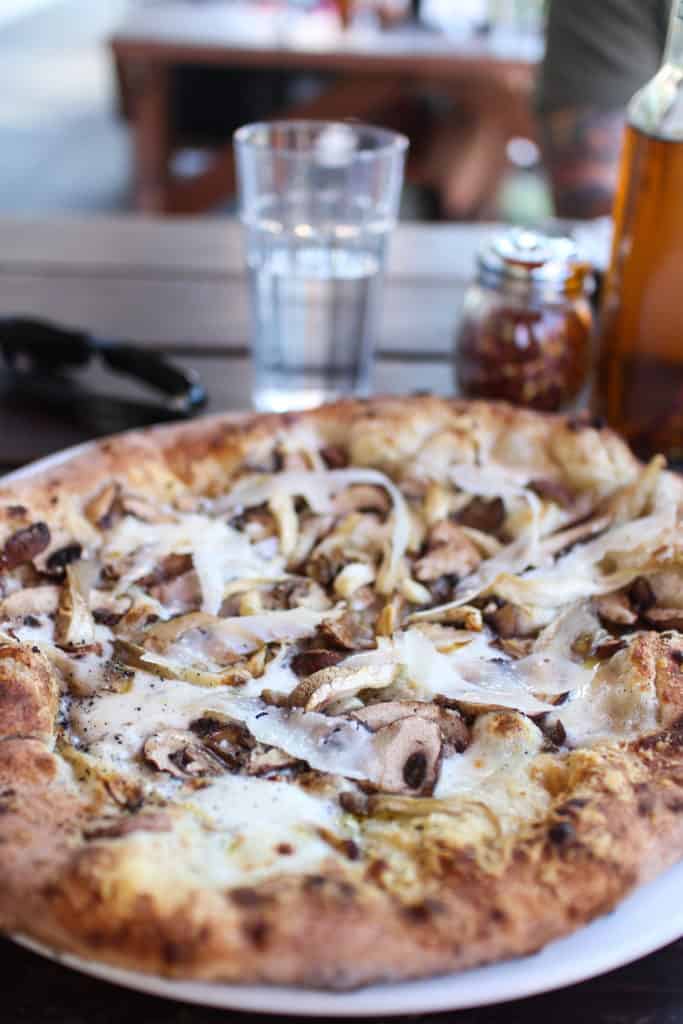 We chose the following food and they were ALL good: 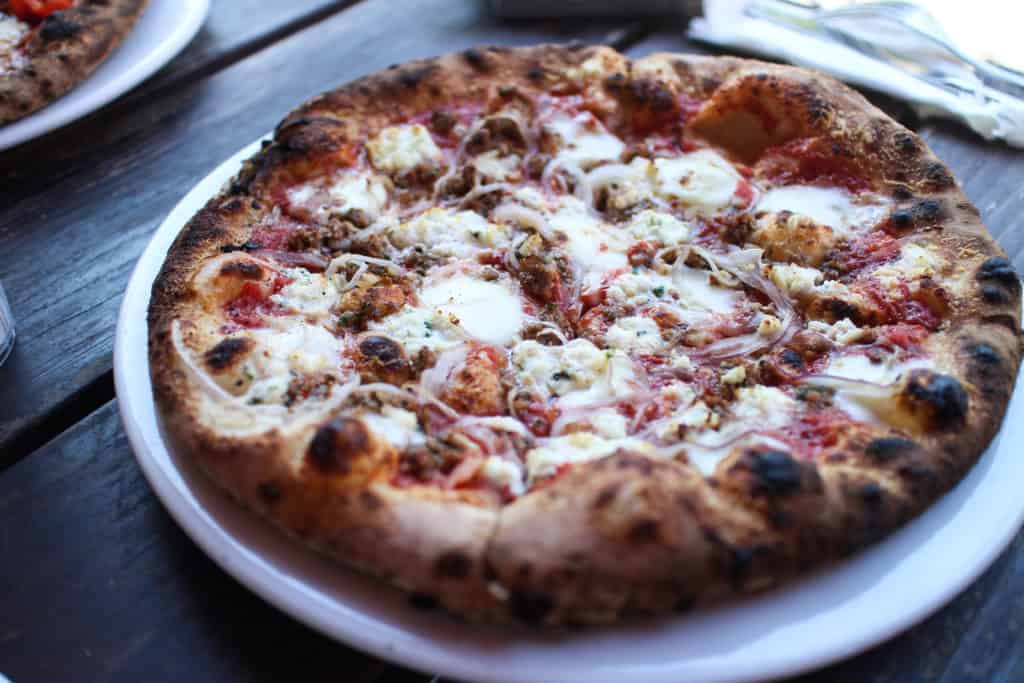 For one of the best sandwiches in town, be sure to stop by Lardo in one of their two locations in Portland. A once food truck now turned into bustling restaurant, Lardo boasts a mouth-watering menu that features pork drenched double burgers, a giant meatball Banh Mi, and hand-cut french fries smothered in pork. 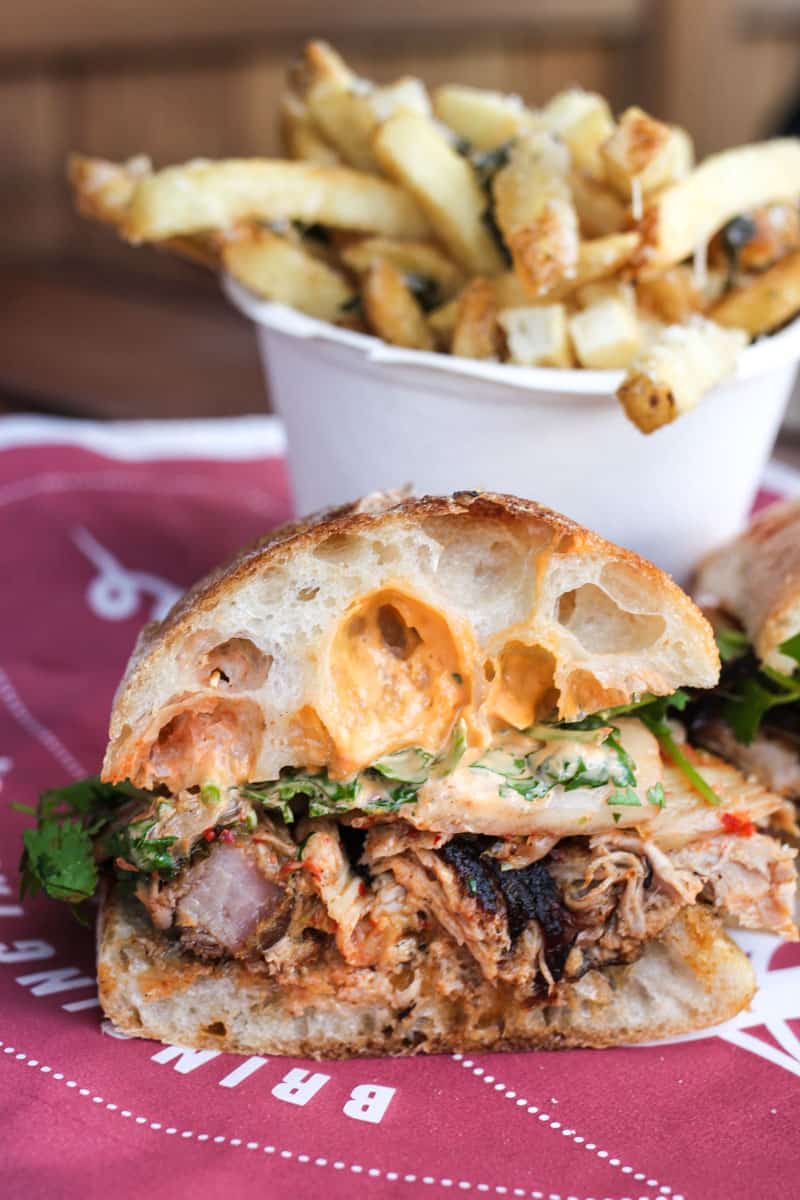 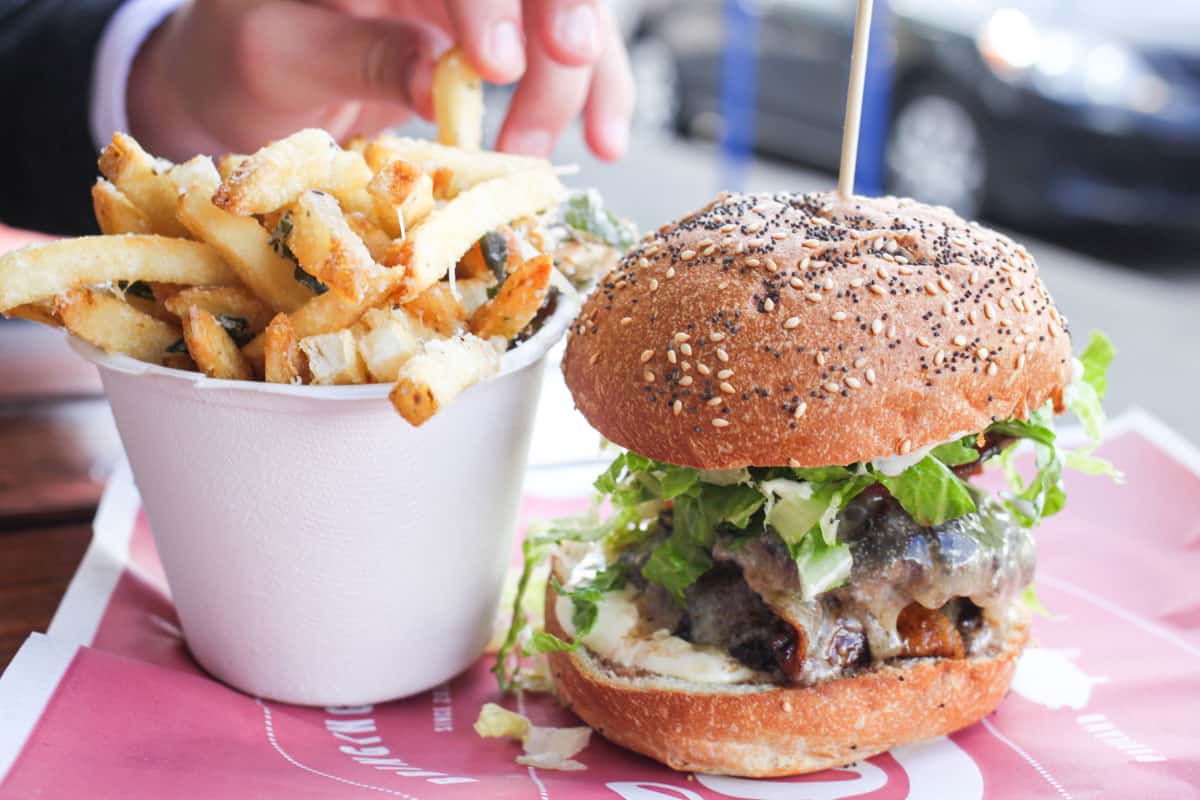 You don’t have to be a jerk to eat here. In fact, the man who helped place my order at Pizza Jerk was possibly one of the kindest people I met while visiting Portland. But let me back up to the first time I heard about Pizza Jerk, which was just a few weeks back on the Bon Appetit Podcast when they were talking about the 3 Best New Pizza Joints In America. My ears totally perked up when they mentioned their number one pick of the year was in Portland- Pizza Jerk. I immediately did some research, made some calls, and found out to my dismay that Pizza Jerk was temporarily closed down. 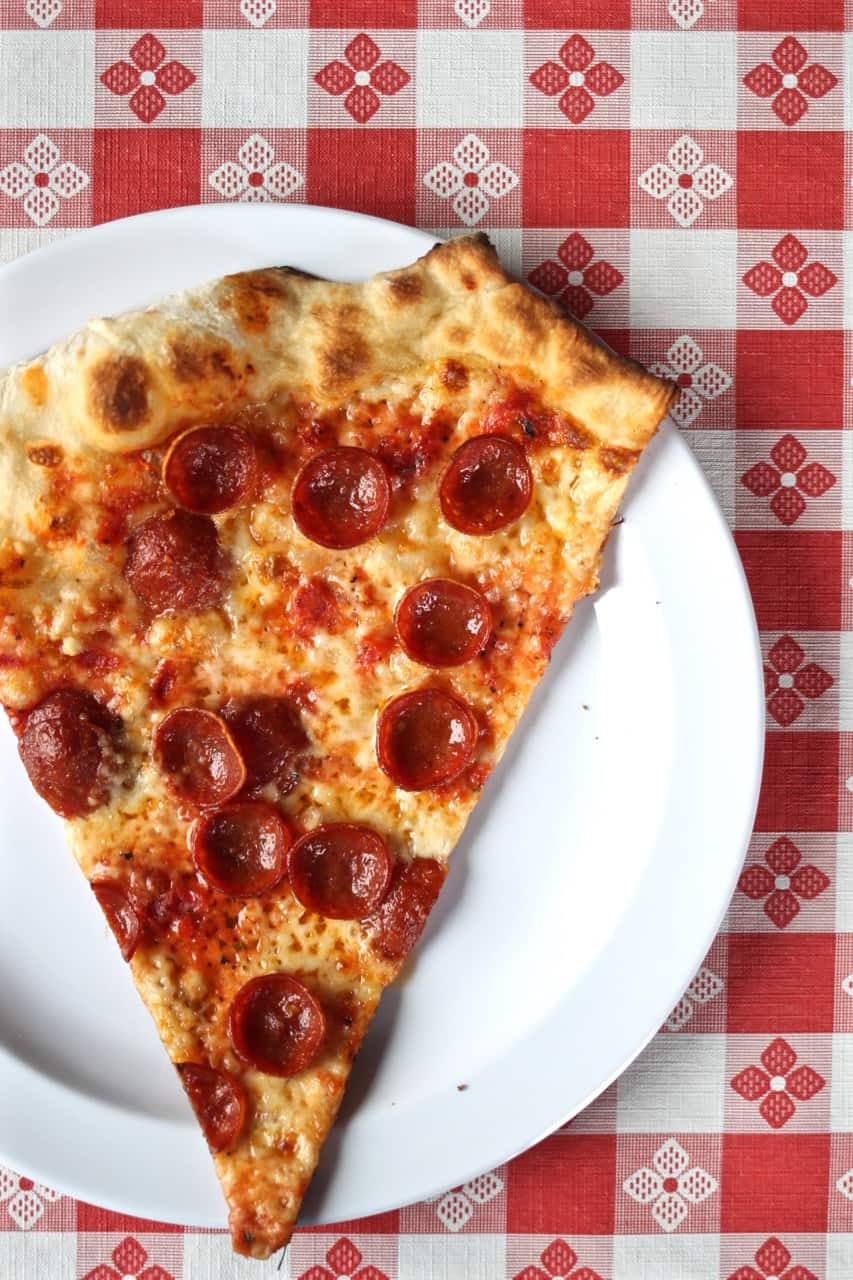 Pin It
So how did I get my pizza? After a little *more* digging and searching, I found a blog that Pizza Jerk keeps up, revealing the big reason as to WHY they had decided to shut their doors. Long story short, my prayers were answered and Pizza Jerk indeed was recently re-opened during my stay in PDX. It’s everything you want in a salty, savory, slice of pizza and it was all I could do to not soil my entire appetite on an entire pizza myself. 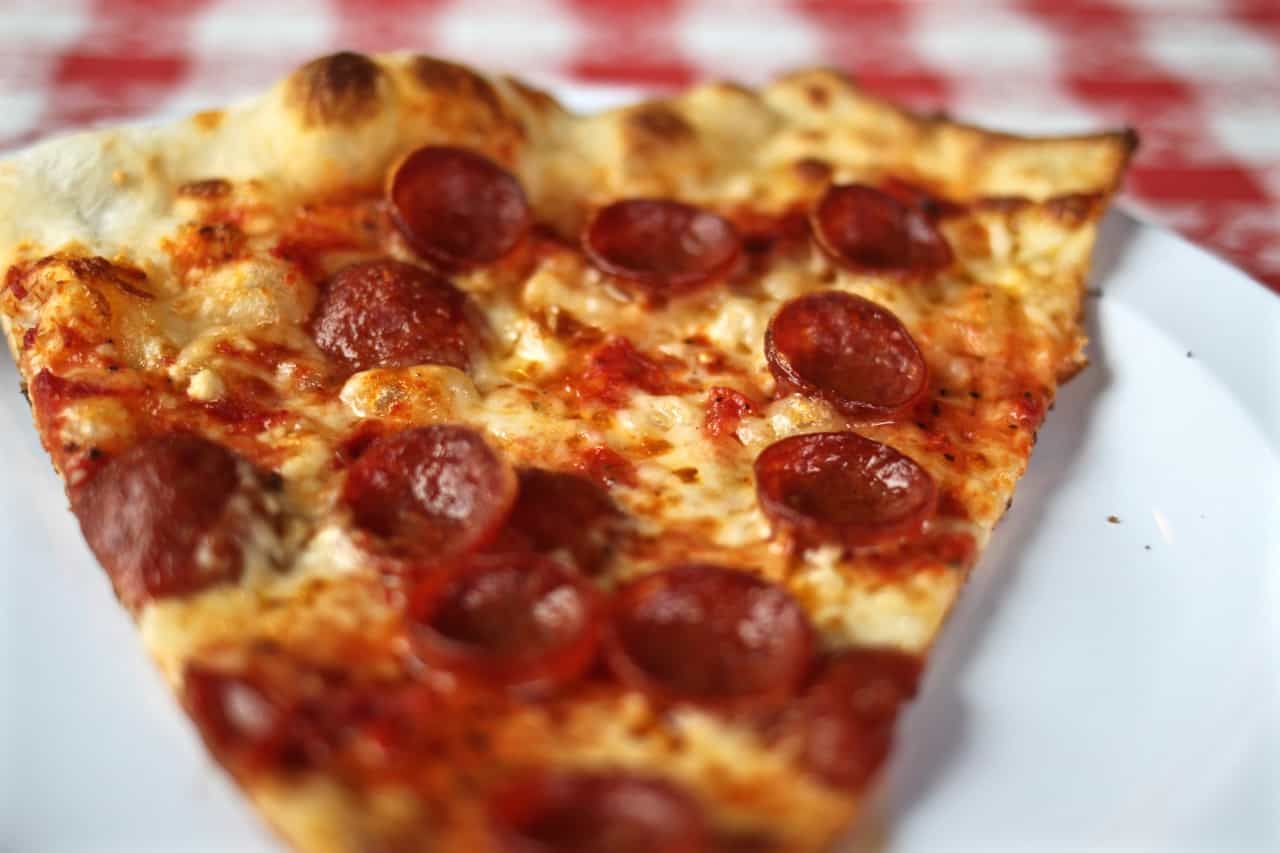 Salt & Straw has come to be known as one of the most popular ice cream shops in the country. Salt & Straw started in Portland, but now they have expanded to Los Angeles, California. They are infamous for creating complex, unique flavors using seasonal and farm-to-table ingredients of their local area. Also, the waffle cones are beautifully made to order and are so delicious! You can smell them along with the rich ice cream inside the store. 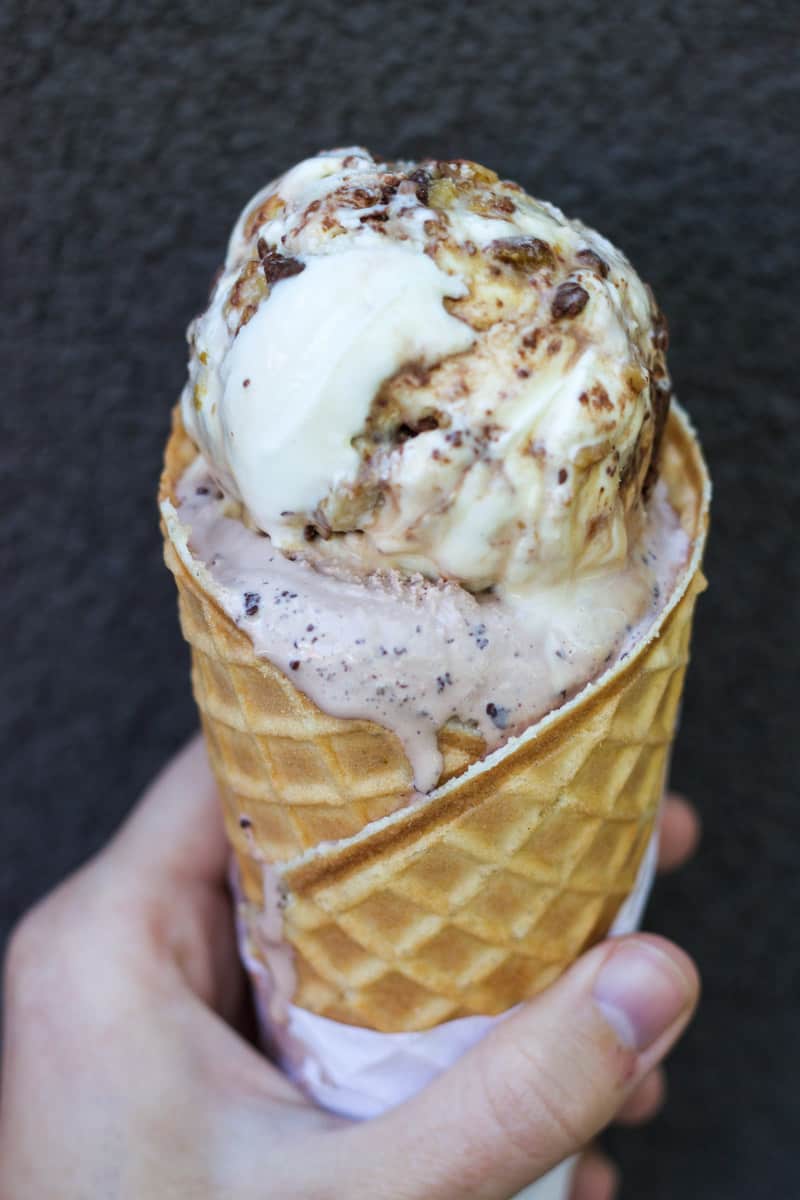 Pin It
There are a couple secrets to Salt & Straw you should know about when you visit:

All their flavors are worth a try, and do not get discouraged by how odd the flavors may sound. They are brilliant at mixing flavors together into ice cream – you will be so pleasantly surprised at how many are good!

Saint Cupcake is the cutest little cupcake place on the North Williams Avenue strip. They have “dots” (mini versions of their cupcakes) which make it easier to try a bunch of flavors. The cupcakes are so unique and beautifully decorated. 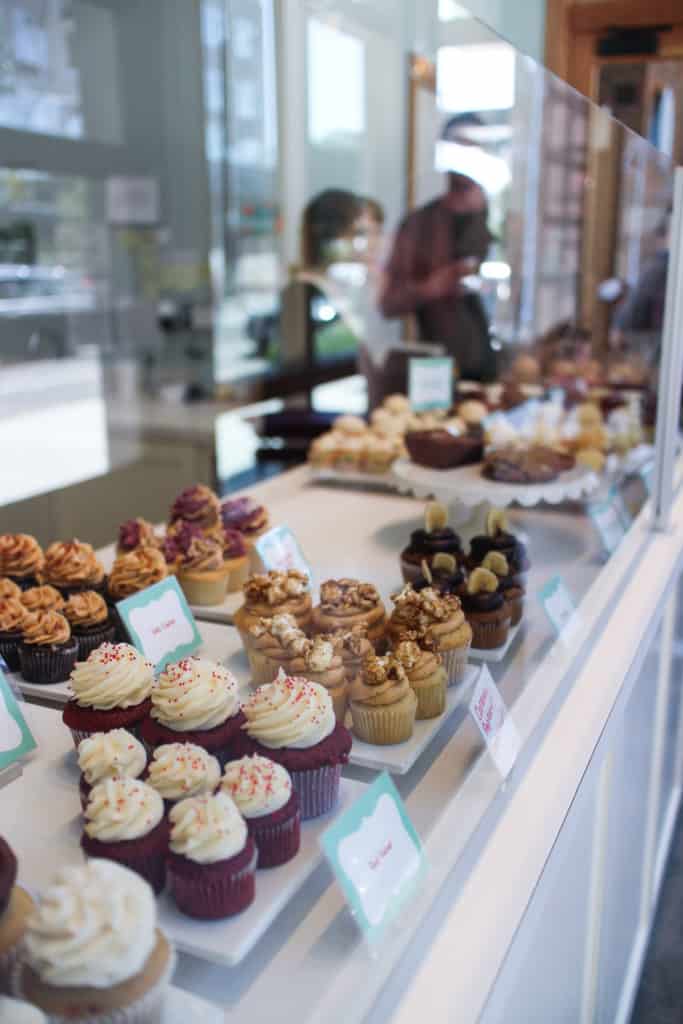 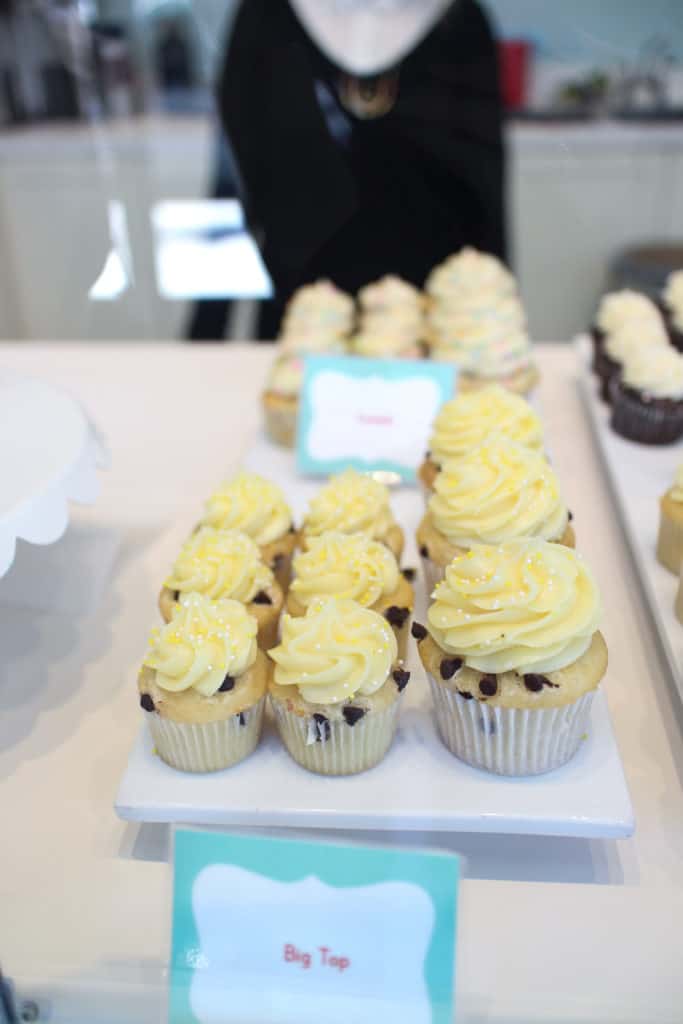 Again, all the flavors were good so no wrong choices here: 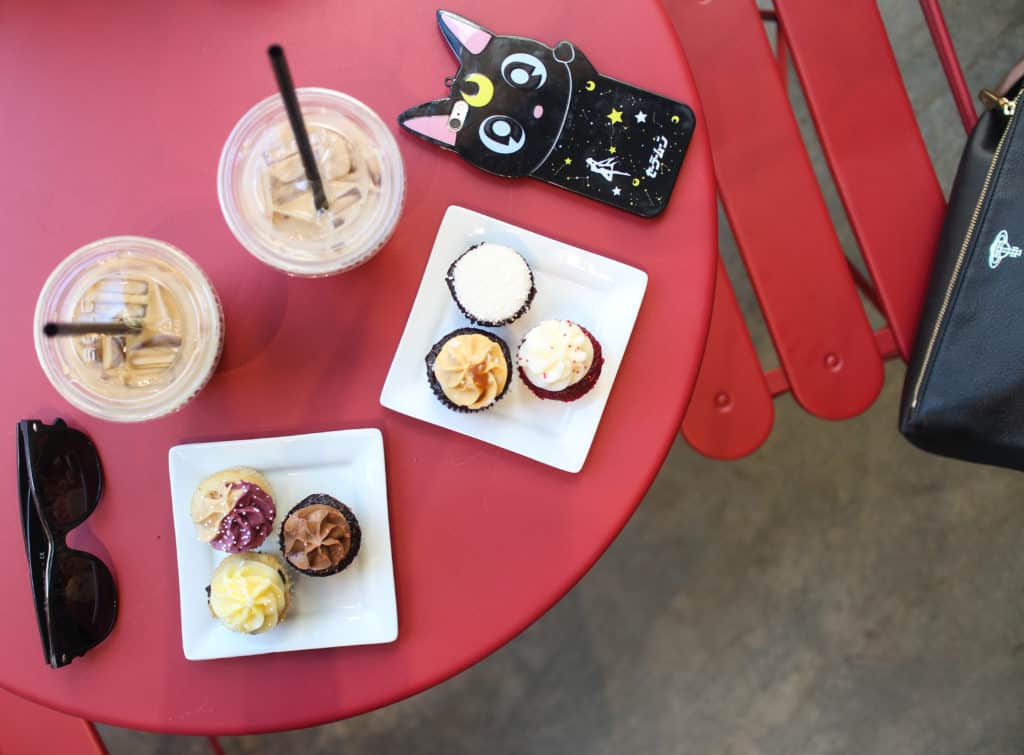 There’s nothing like good sushi when you’re in a coastal town. This restaurant is 100% to code with the Portland vibe of sustainability, organic, farm to fork, etc. and sports the tagline “sustainable. delectable. possible.” We loved the Southeast neighborhood this location is situated in almost as much as the sushi. 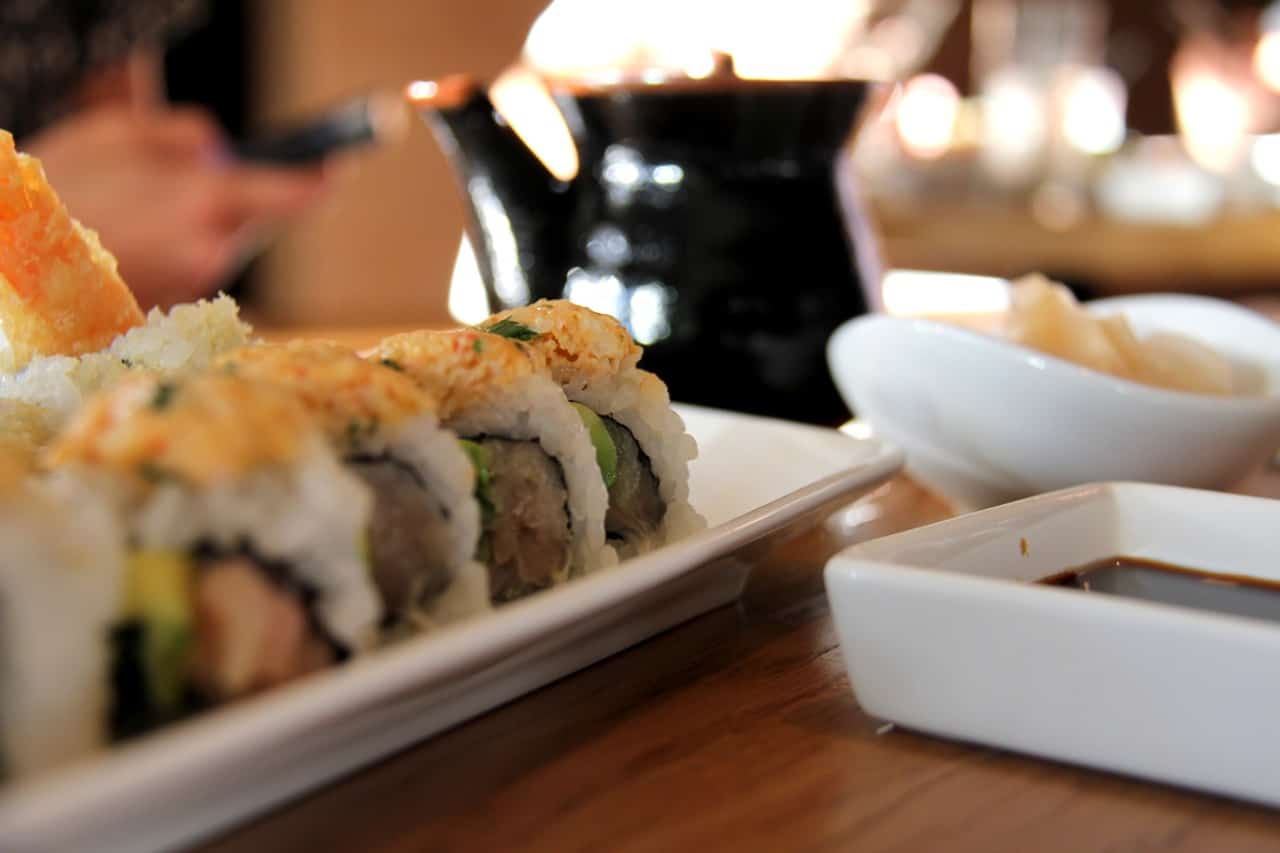 Tasty n Sons is Portland’s go-to brunch spot and new American diner serving family-style meals inspired by co-owner and executive chef John Gorham’s international travels. Nestled along the North Williams Avenue strip, Tasty n Sons has an industrial, neighborhood feel. While their brunch is famous, the dinner can easily stand on its own as iconic. 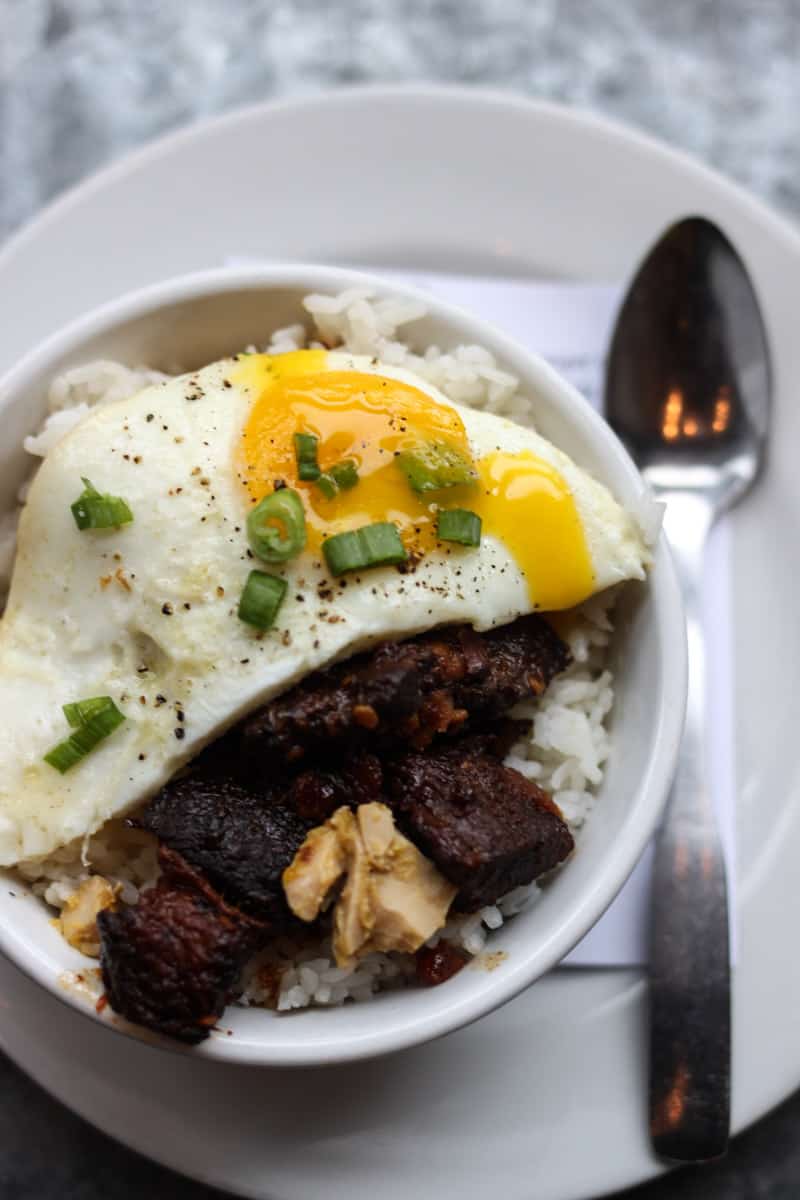 The following are highly recommended: 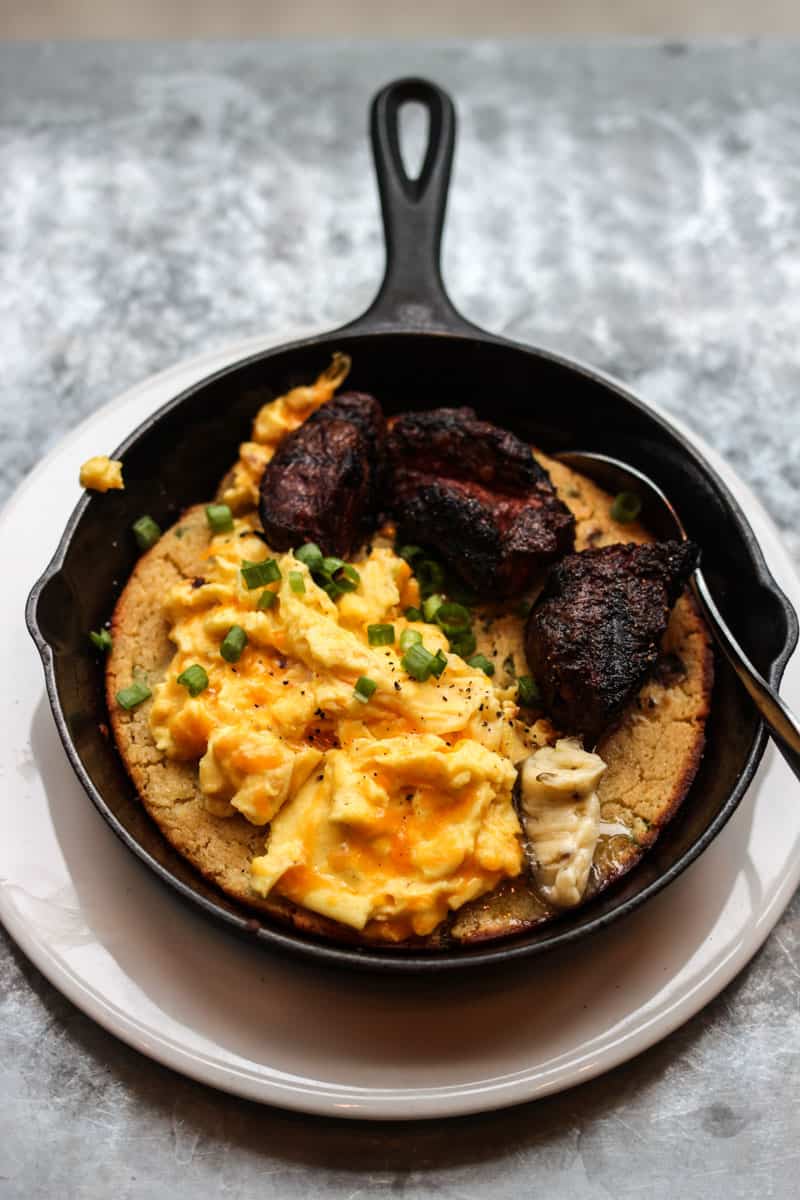 Because what is a trip to a foodie city without finding the best Mexican joint in town? We loved the neighborhood this specific location was in- the Boise neighborhood in the North East part of town (although they do have an additional location just off of Hawthorne in the South East part of Portland) and had no idea that this would become one of our absolutely favorite places to eat in the entire city! Best menu item? Their tacos. #shocker 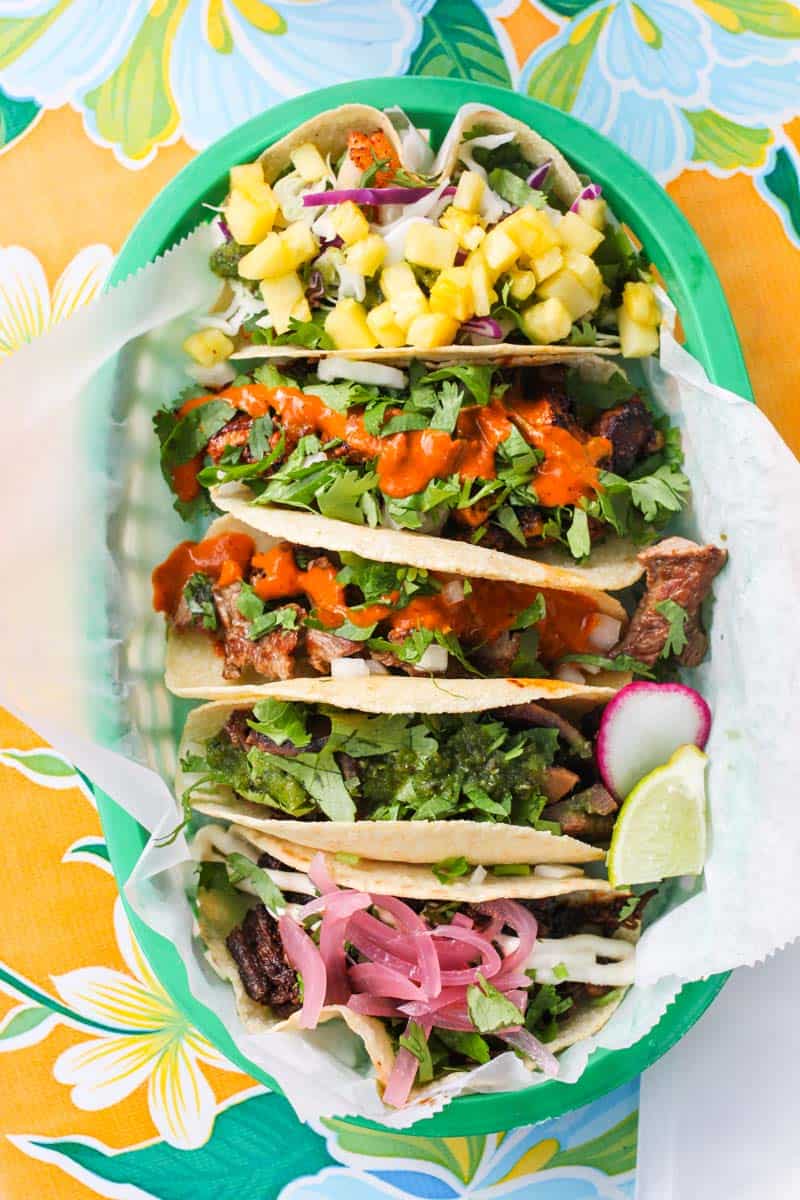 Pin It
In top to bottom order: 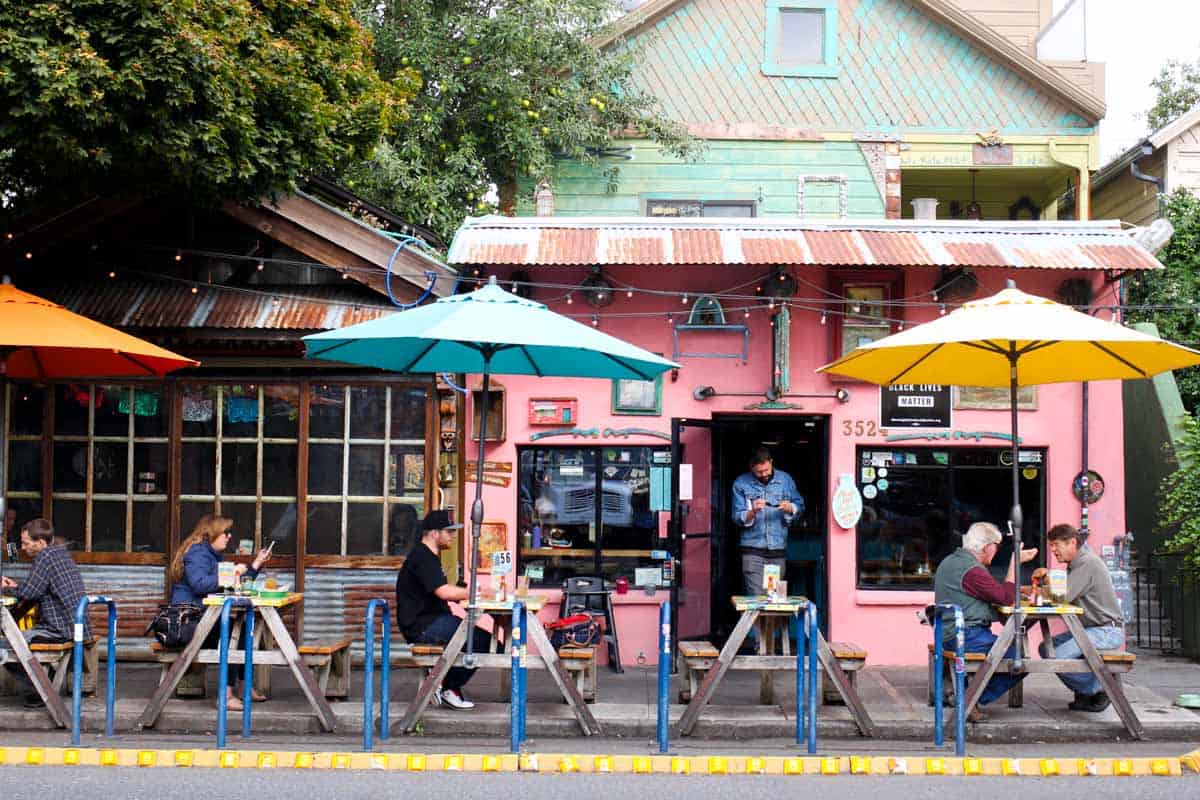 Pin It
Want more information on Por Que No? Check out our full blog post for alllll the delicious deets.

Screen Door is my favorite southern brunch I’ve had so far. It’s hearty, soulful, and delicious! The decor is simple and diner-like on the inside, and it looks like a neighborhood house on the outside. The gravy here is outstanding! I seriously crave it even while I am having it. I couldn’t get enough! 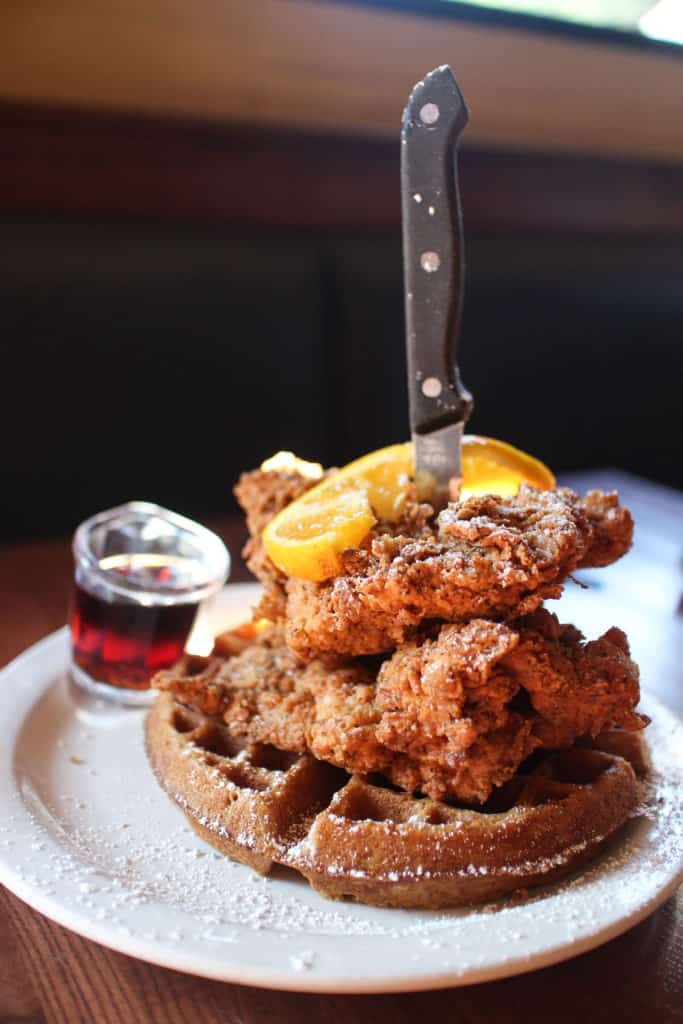 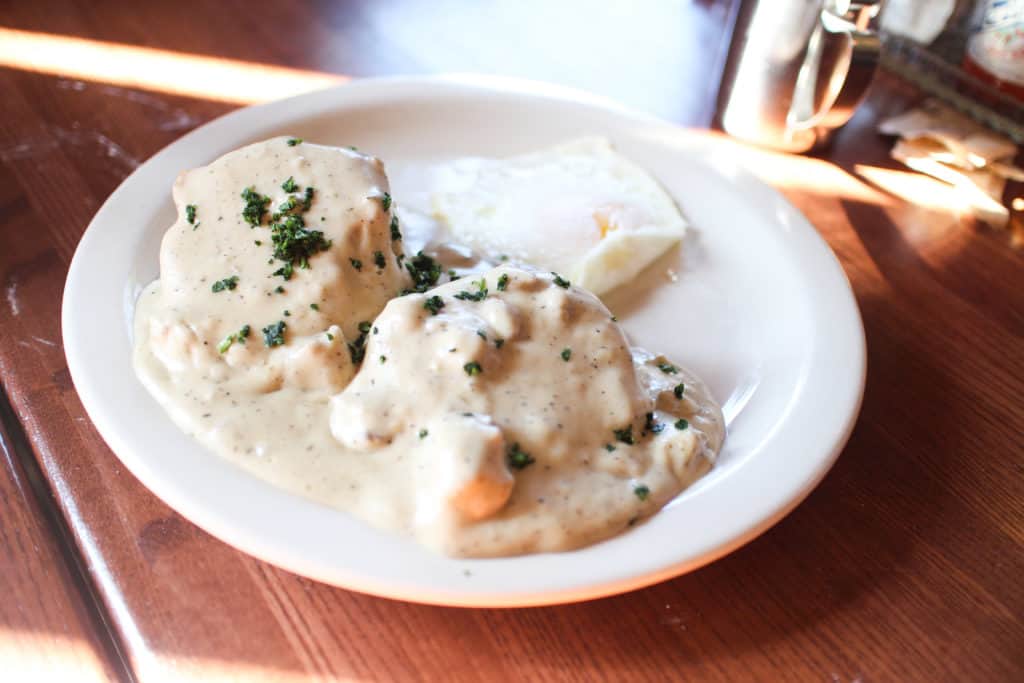 Here is what we had: 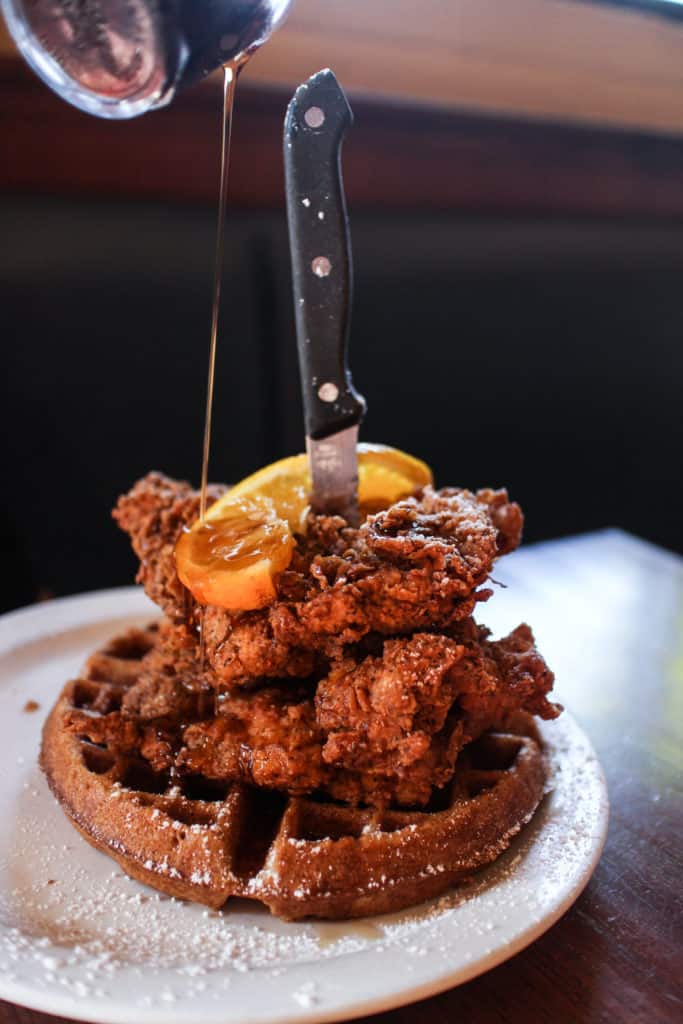 Newly opened in 2013, owners Nathan and Jamie Snell desired to “bring back the mom and pop doughnut shop” and thereafter created a delicious, made-to-order doughnut experience that is unlike any other in PDX. You can read our full post here for all of the delicious details on Pip’s, and in the meantime feast your eyes on these bad boys . . . 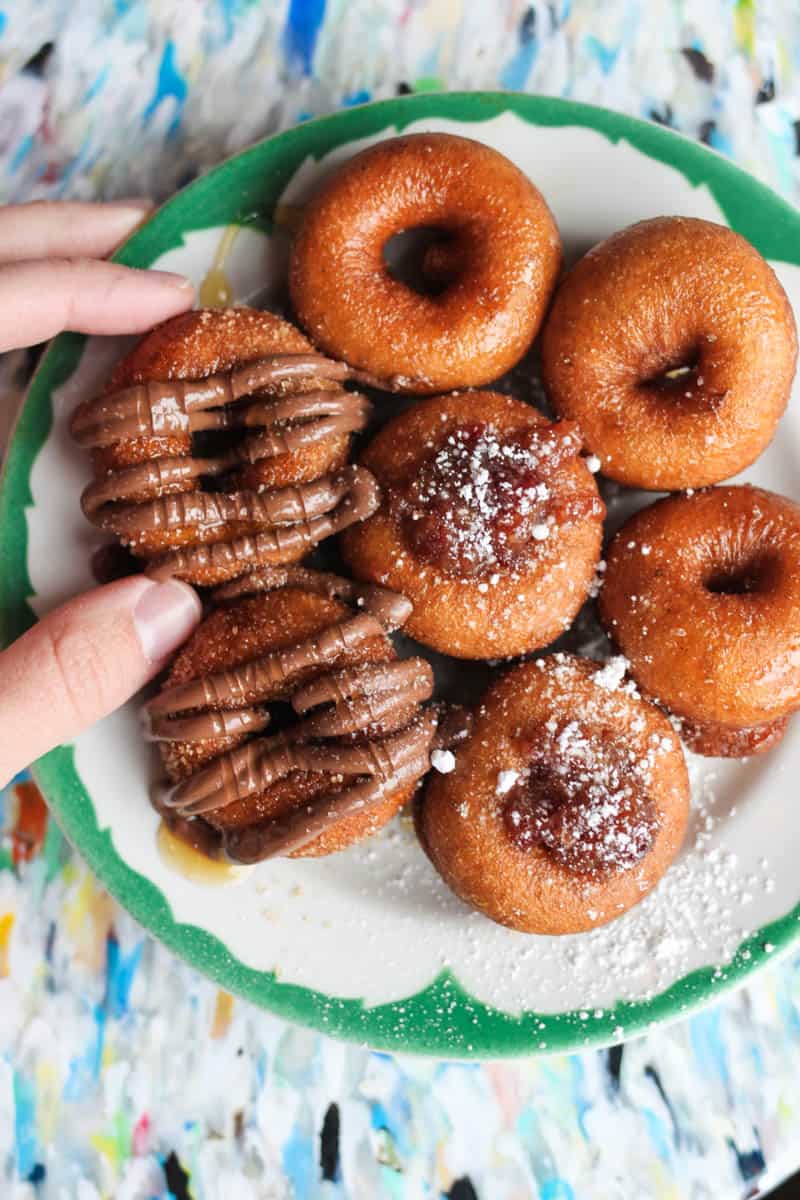 It’s hard to forget a name like Nong’s Khao Man Gai after you hear it over. And over. And over. Rumored to be one of the best food trucks in Portland, Nong’s serves delicious authentic Thai Food. The owner, Nong, moved to the U.S. in 2003 with only two suitcases and $70. Now, 13 years later, she has a thriving and cult-following business and a simple yet incredibly flavored rice and chicken dish (Khao Man Gai) that will literally knock your socks off. Be prepared to join the following. 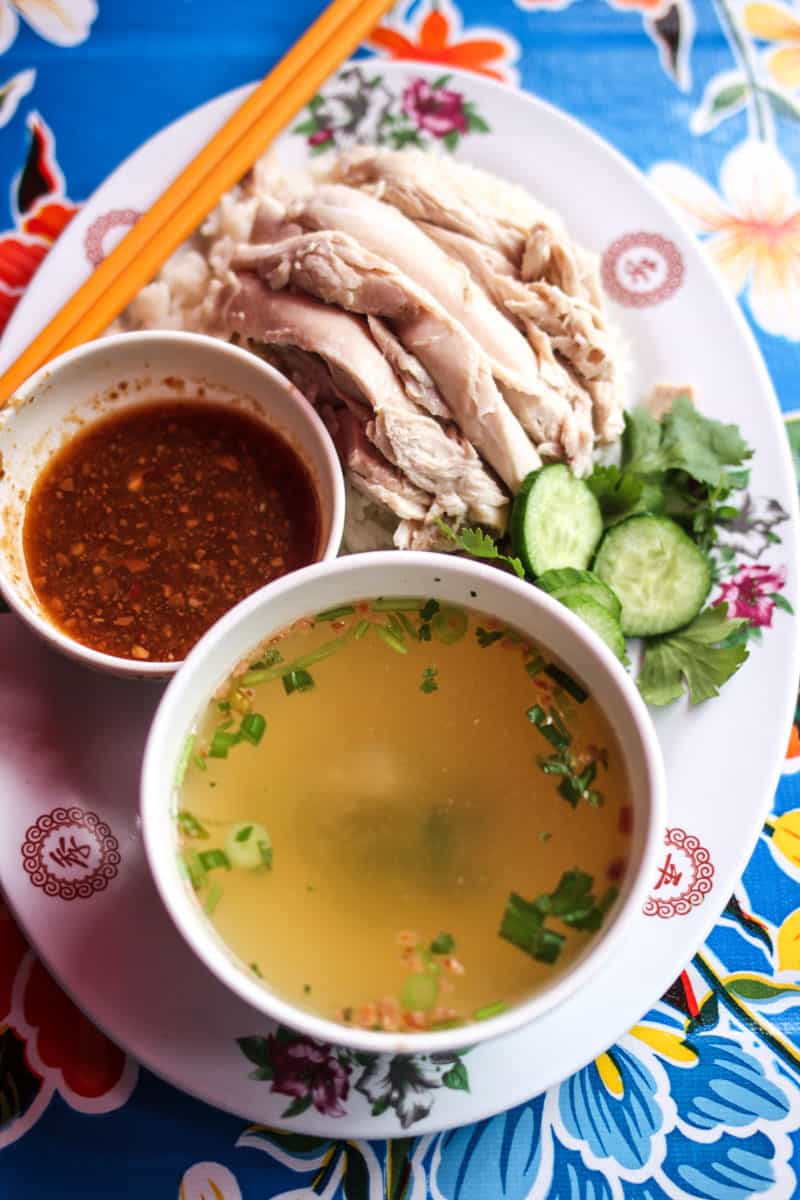 Pin It
You can taste some of Nong’s delicious food at one of her two PDX food trucks, or skip the lines and enjoy her famous Thai cooking at her Southeast restaurant.

We noticed while in Portland there was an over abundance of MEAT, MEAT, MEAT everywhere. Which was a big shocker for how vegan of a city it is. But, nonetheless, this food-centric town (meaty or not), has more charcuterie boards than you can imagine. And the best is at Olympia Provisions. I first found them at the Good Food Awards in San Francisco, and was pleasantly surprised to hear they had an actual restaurant in the industrial part of downtown Portland. 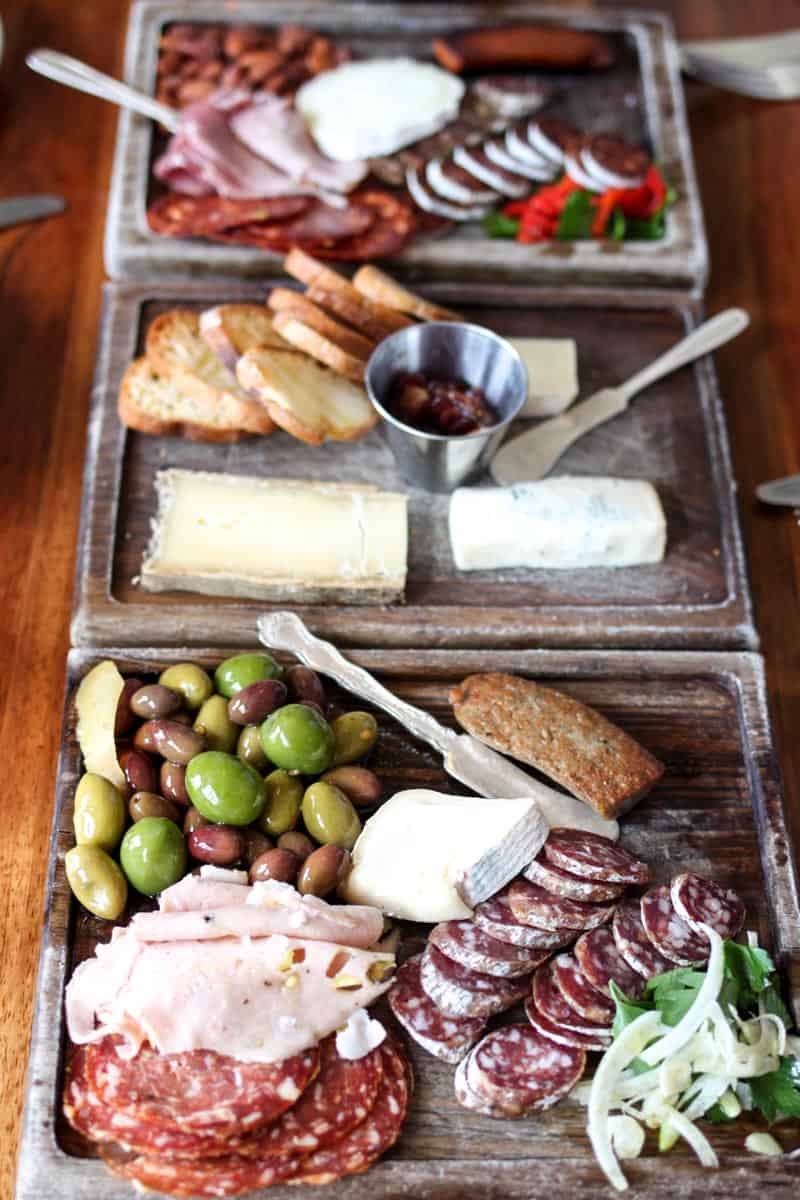 Pin It
You’ll be overwelmed by their incredible and glorious menu once you get there, but be sure to try the Spanish Board, Daily Cheese Board, the Sauteed Spaetzle, and their house marinated olives. Not enough charcuterie? Hop over to the bar and purchase one of their homemade salami rolls to go. 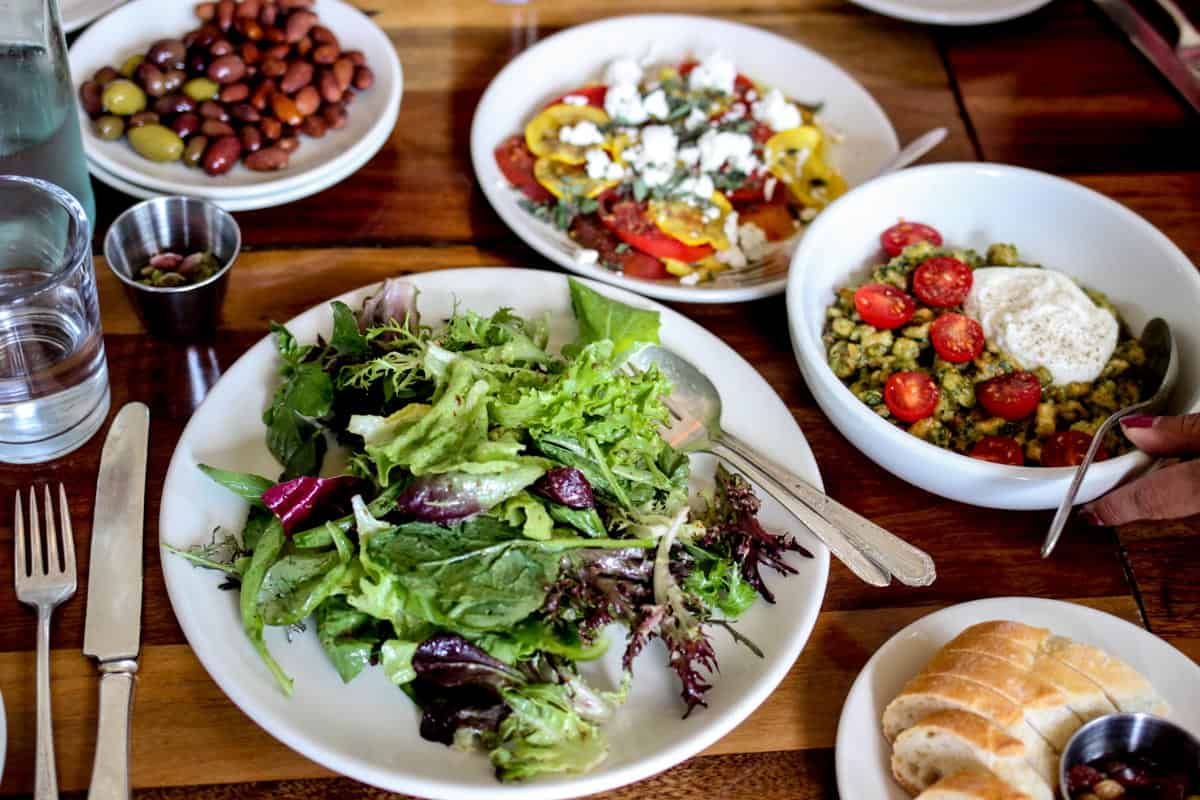 Although a rival to the earlier mentioned Screen Door, we had to mention both. Because they’re just that incredibly good. Pine State Biscuits was one of our most recommended spots to hit up while dining in Portland- and the recommendations come for good reason. Their homemade, buttery biscuits will make you feel like you’re sitting at home at your mom’s counter as you cover these homemade beauties in soft, salty butter and homemade marionberry jam. 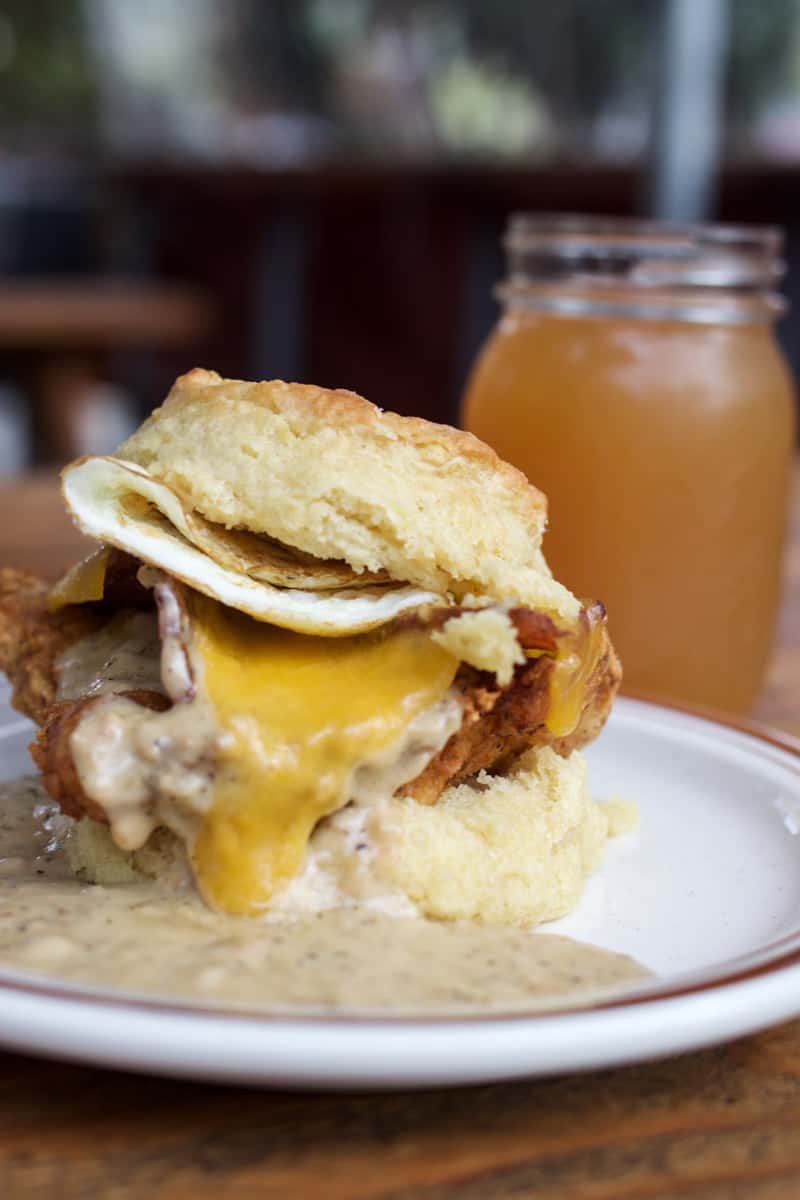 Feeling more adventurous? Try their oh-so gluttonous Reggie Delux. It’s a homemade biscuit topped with fried chicken, bacon, cheese, gravy, and a hot fried egg. You might need a walk around the block after this one but trust me- it’s 100% worth it. They have 4 PDX locations including their booth at the Saturday Farmers Market- we tried their Alberta location and really enjoyed it. 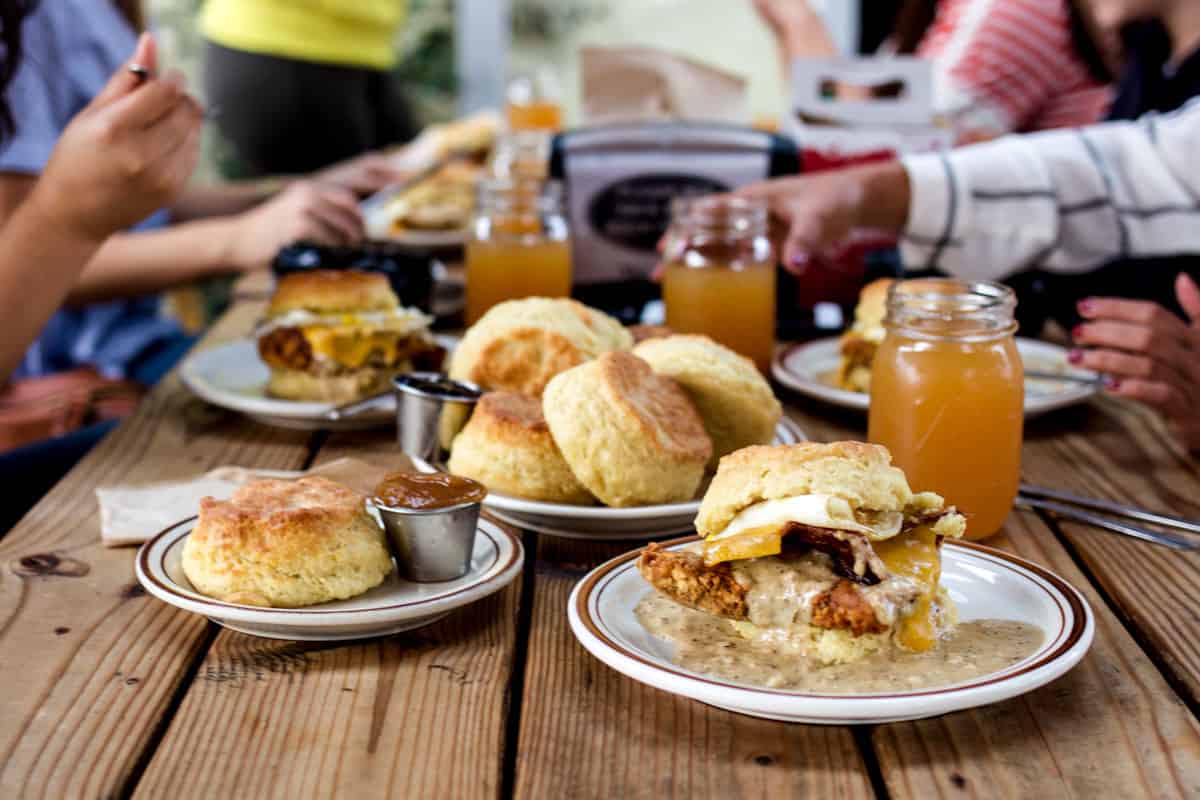 You have probably heard of VooDoo when you think of donuts in Portland, Oregon. While this popular touristy spot has its charm, you really can’t beat homemade donuts made with a classic brioche recipe and inventive, yet tasteful ingredients. Although now with multiple locations in Portland and also in Los Angeles and Tokyo, Blue Star Donuts began in Portland and still stands as a symbol of delicious baked confectionaries in PDX today. 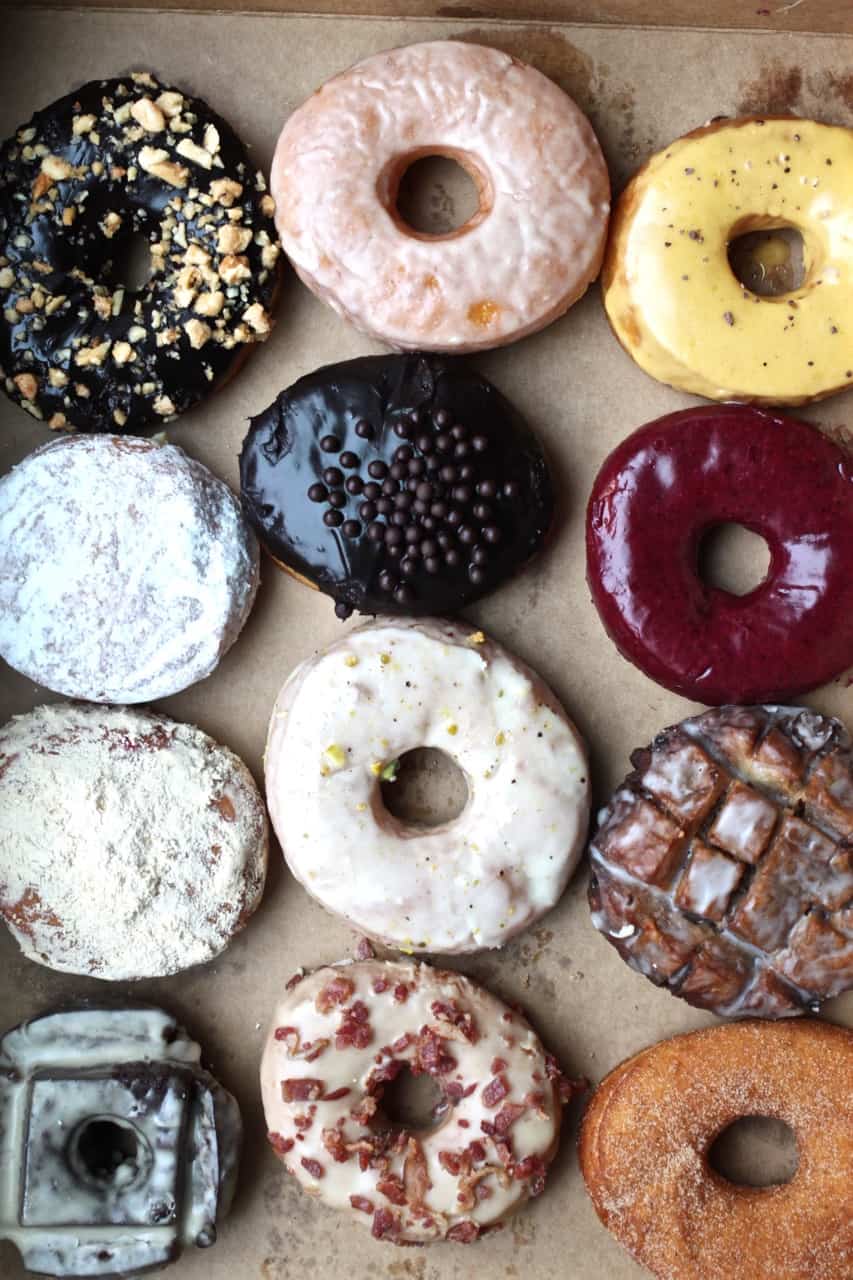 Pin It
Head over to any of their locations for drool-worthy, high quality creations including their blueberry bourbon basil, bacon maple, peanut butter jelly filled, or (my personal favorite) the valrhona chocolate crunch donut. Each flavor is so distinctly different. I highly suggest dividing and conquering with a friend- grab a few more than you think you’ll need (worth it) and taste a little bit of everything. 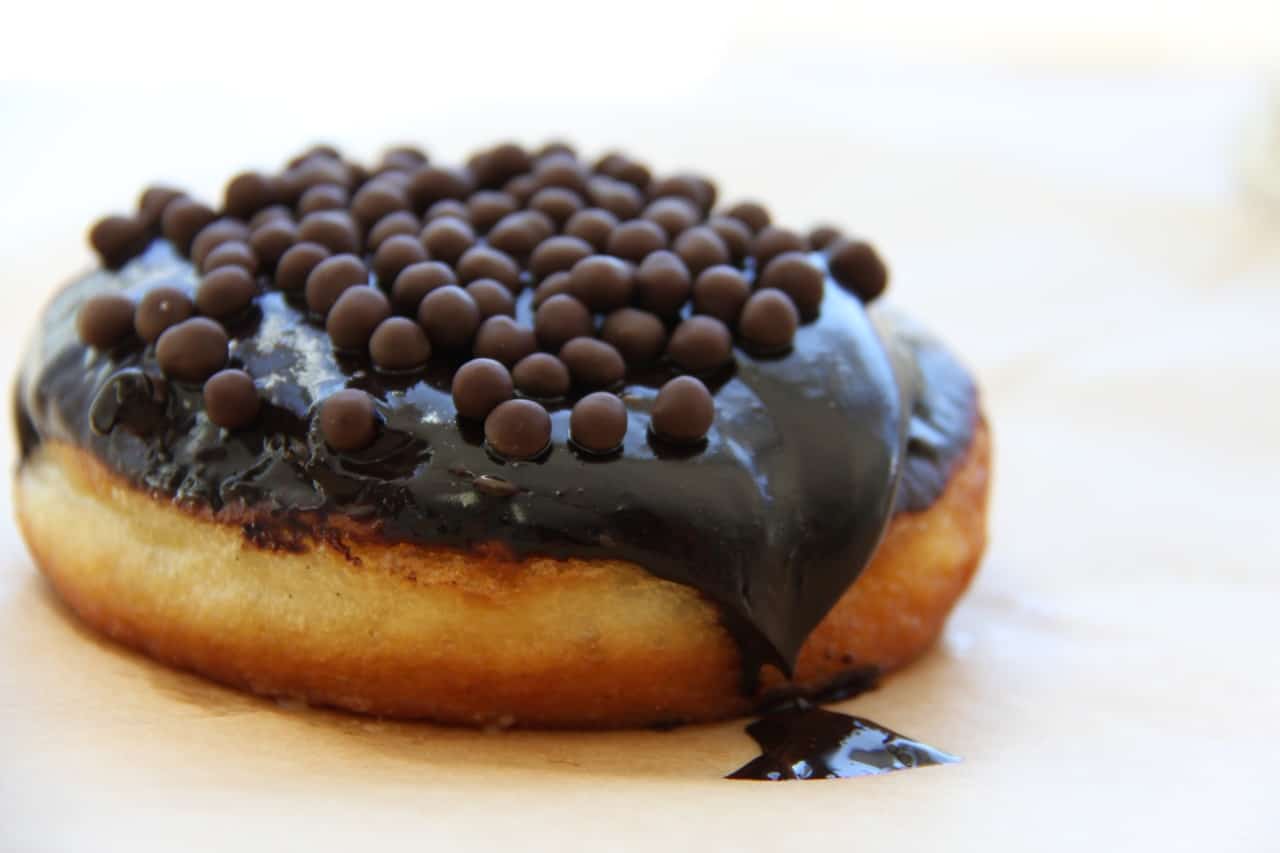 If you haven’t heard of Pok Pok, it’s time to get out of that hole and start living. Pok Pok has been a top item in terms of Portland Restaurants for several years now- and it only takes one meal for a new comer to understand why. We were lucky enough to visit the original location, “Pok Pok PDX” for a delicious meal with over 8 menu items, all shared family style as they encourage their guests to do so. Beware- lines at Pok Pok can be insanely long, similar to most bustling restaurants in Portland. Cut the line by reserving for a group of 6 or more online ahead of time or ordering takeout! 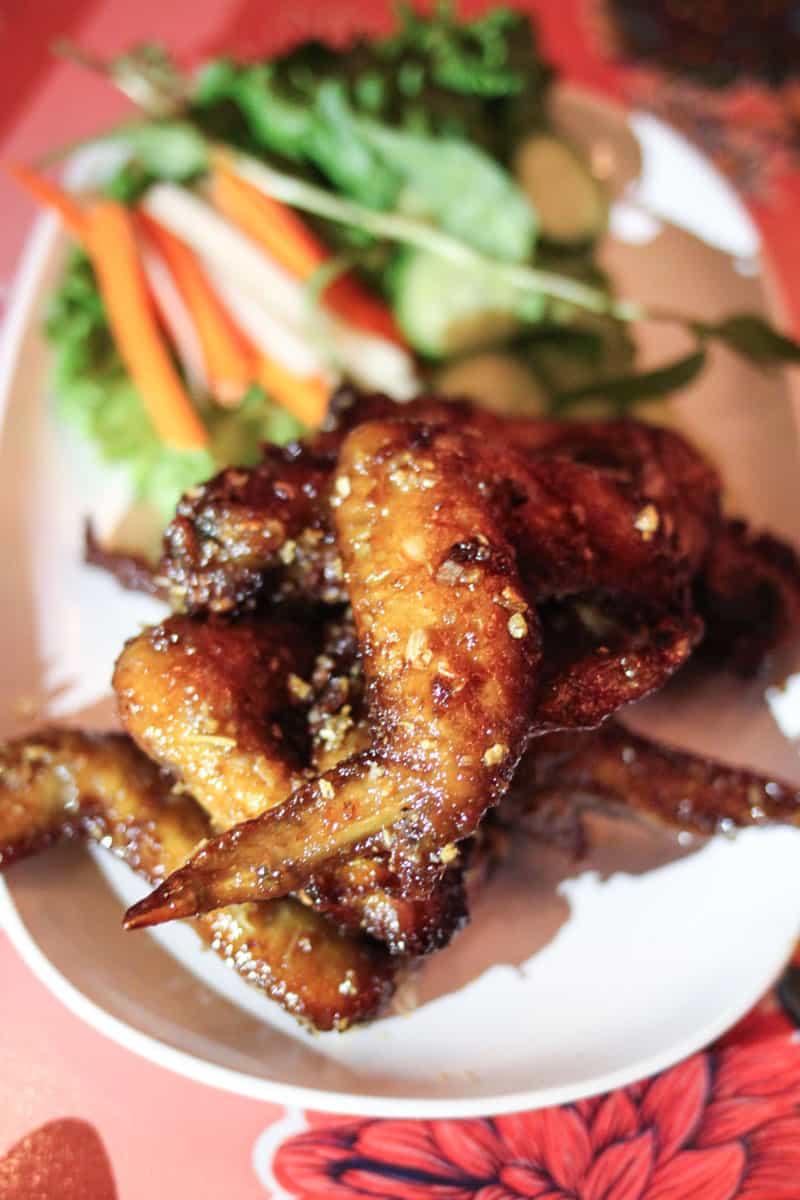 Pin It
Most popular items on Pok Pok’s menu: 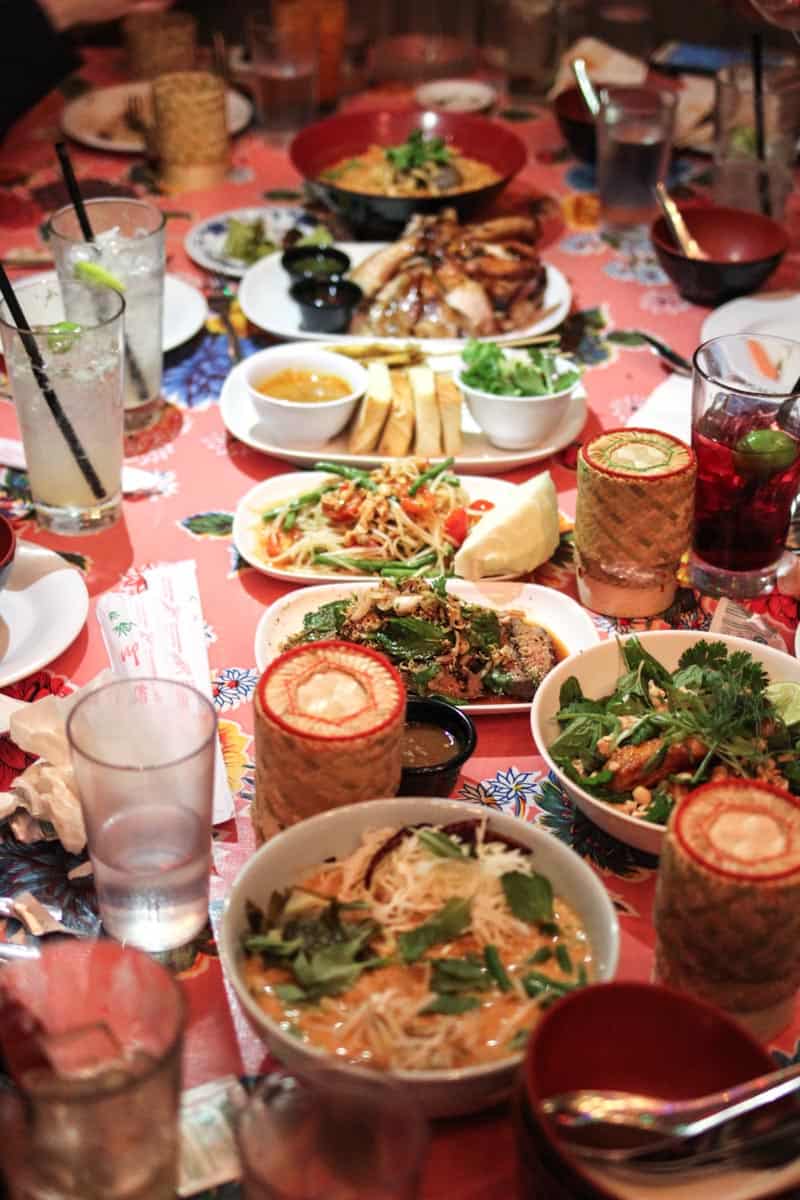