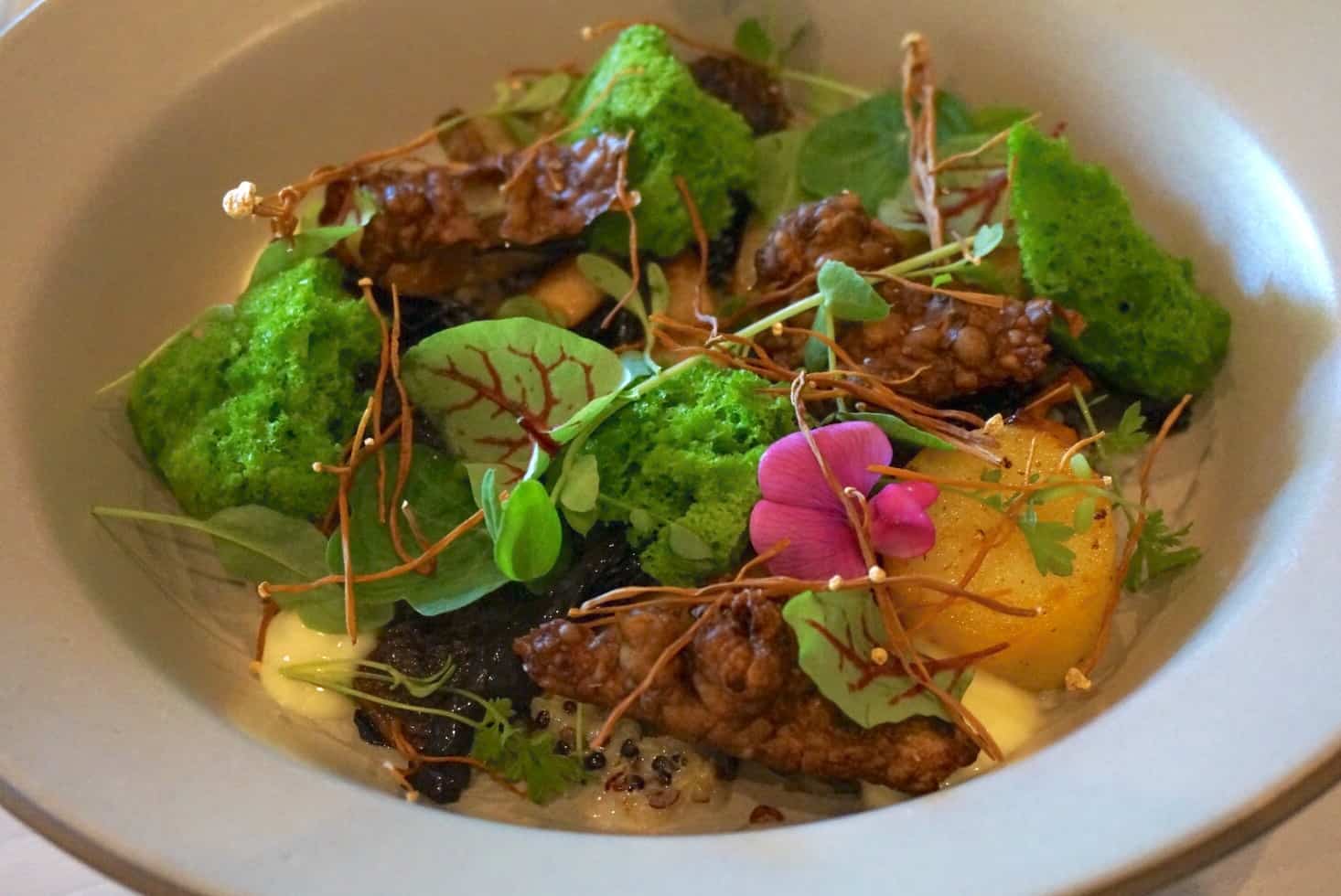 Pin It
Art and food intersect at In Situ – Corey Lee’s latest restaurant inside of the new SFMOMA (San Francisco Museum of Modern Art). After netflixing Massimo Bottura on Chef’s Table the previous weekend, I was excited to get a dining room reservation at In Situ which opened on June 14, 2016. How is Massimo Bottura related to In Situ?

James Beard-award winning chef Corey Lee is collaborating with close to 100 top “culinary influencers, innovators, and icons” from around the world to recreate one signature dish chosen by each chef. According to the staff at In Situ, the instruction ranged from very detailed recipes to more general sketches. Some flew over to demonstrate the dish to Corey Lee in person and even sent their dishware over to accompany the dish. The menu changes daily although you can expect to see many of the dishes for the next few months before another new lineup of dishes is added to the rotation. Massimo Bottura’s Oops! I Dropped the Lemon Tart unfortunately didn’t make its debut yet when I dined last month, but the dessert was added to the menu yesterday.

Most of the items that we tried were delicious. While the portions are generally small and the currently most expensive dish is $38, the dining experience is much less than a flight around the world to eat at these restaurants. My tip is to make a reservation online for 2-3 friends and try many of the dishes. Four of the dishes that we ordered are from the top 10 restaurants of the 2016 World’s 50 Best Restaurants. 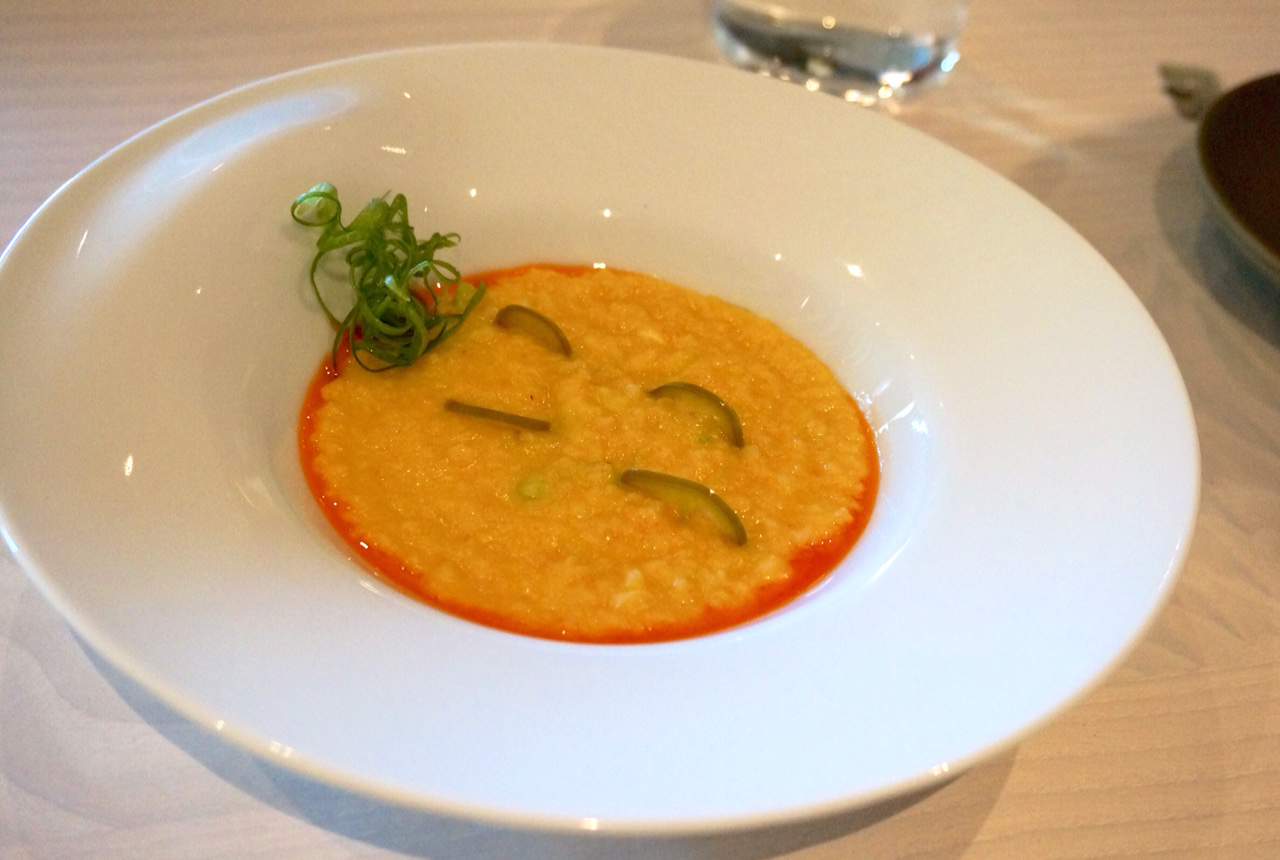 Pin It
Our dining experience began on a high note with the savory Shrimp Grits from Chef Wylie Dufresne’s wd~50 in New York City.  The pickled jalapeño and shrimp oil gave the dish a spicy zing. 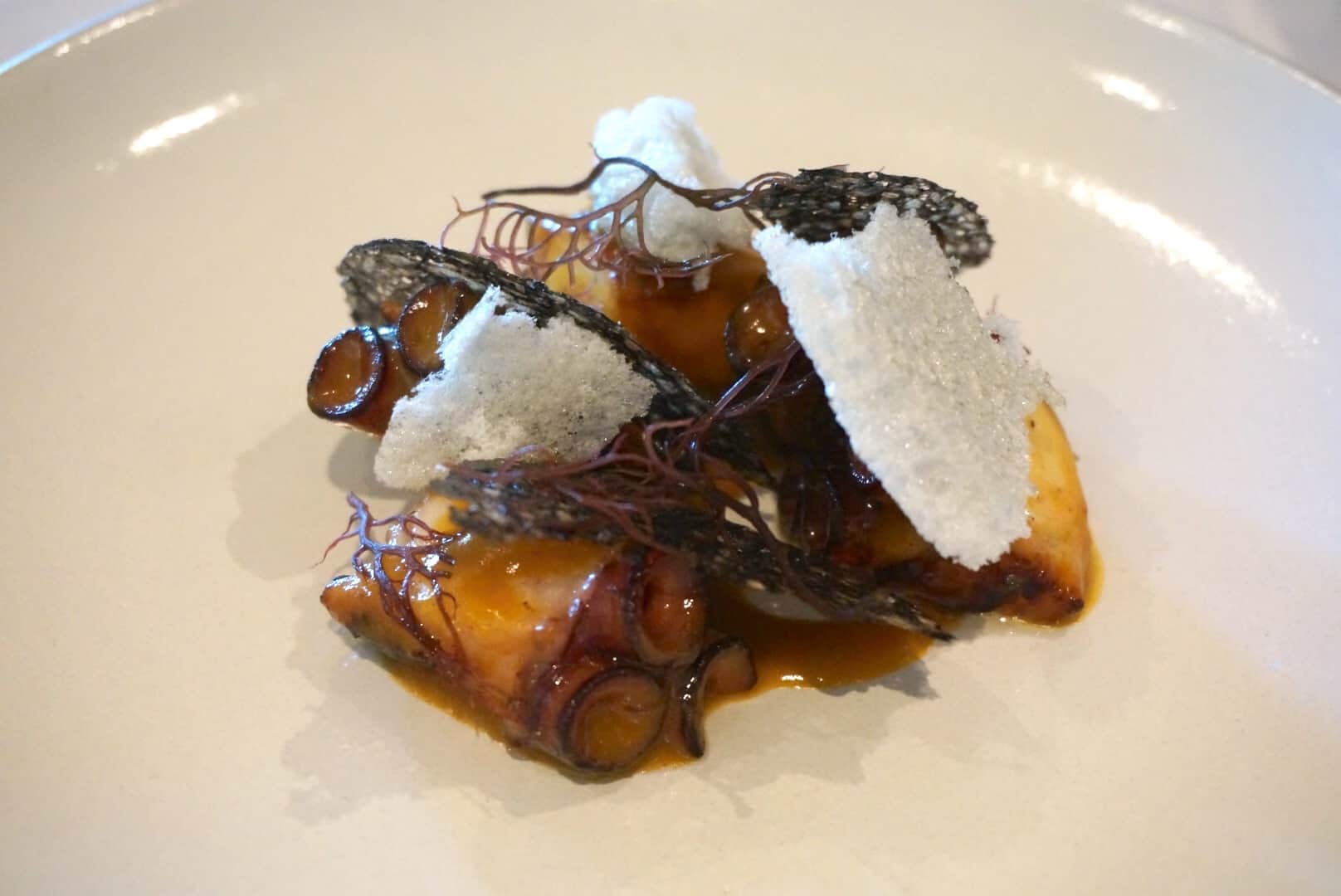 Pin It
Next up was another spicy dish, the Octopus and the Coral from Virgilio Martinez’s Central in Lima, Peru. The braised octopus with seaweed was accompanied by a small cup of soup that balanced out the octopus sauce’s strong, salty flavor. 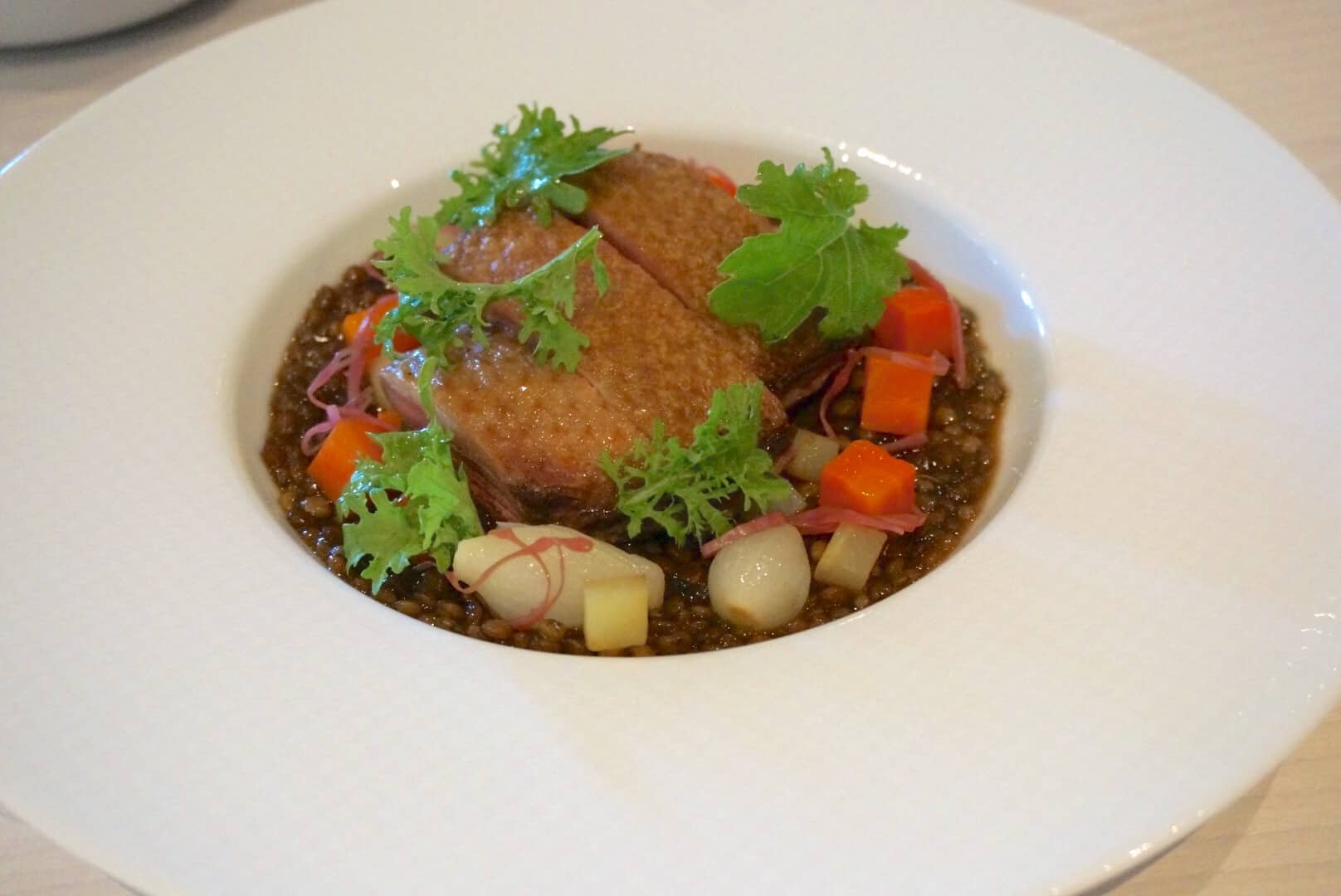 Pin It
Our tongues finally got a break from the heat with the Liberty Duck Breast from Thomas Keller’s The French Laundry in Yountville, California. The duck was perfectly cooked and best enjoyed in a spoonful together with the French green lentils, apples, and aged red wine vinegar sauce.

At this point, our party of three was still hungry, and decided to add two more dishes before the dessert course. 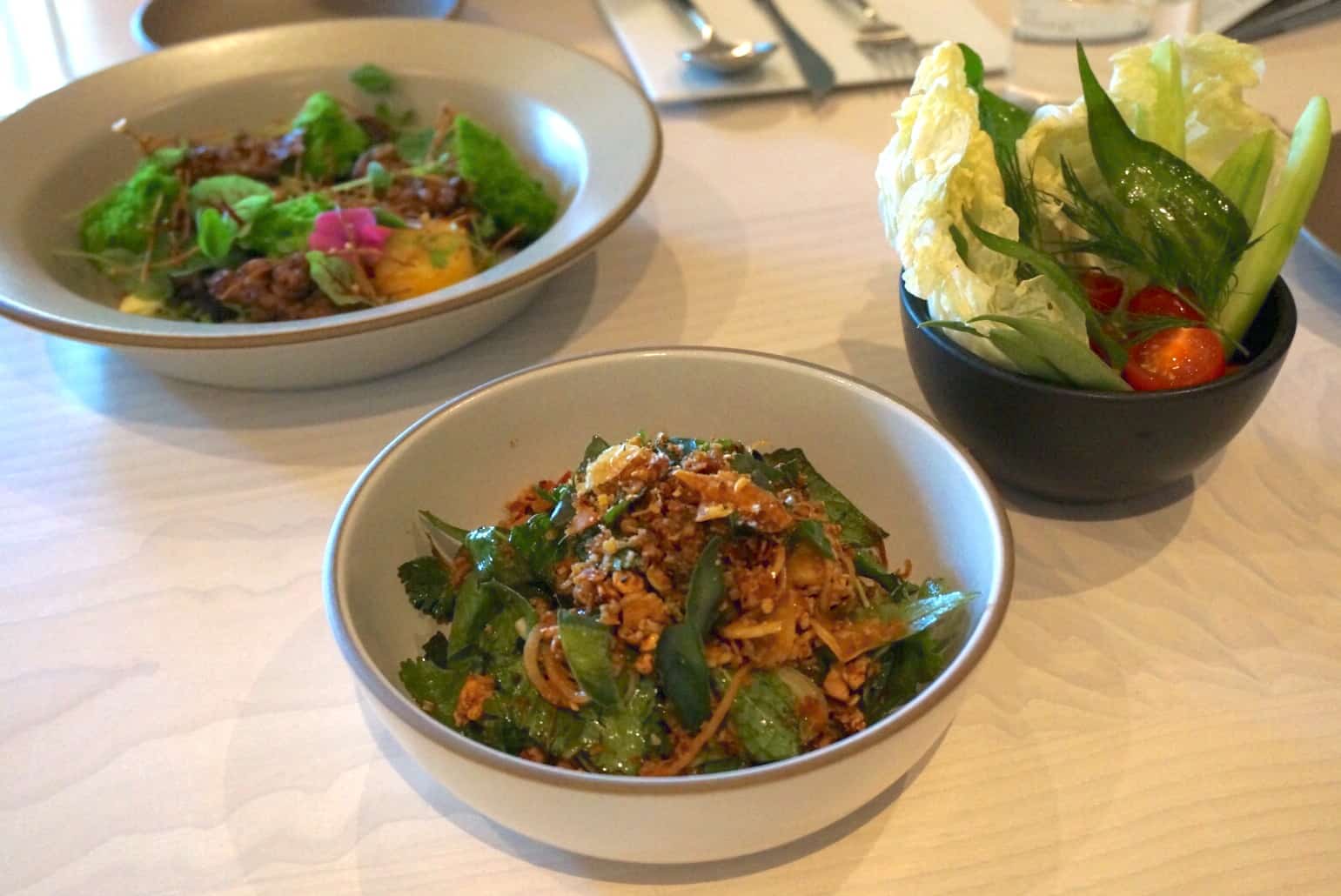 Pin It
Pictured at the beginning of the post and in the background of the photo above, with the Guinea Fowl Larp Chiang Mai dish in the foreground, is the Forest. The Forest’s medley of quinoa risotto, mushrooms, parsley “moss” from Mauro Colagreco’s Mirazur in Menton, France, was light, simple, and beautifully presented. This was our favorite dish of the meal. We ate the Forest first since the Guinea Fowl Larp Chiang Mai from David Thompson’s Nahm in Bangkok, Thailand was the spiciest dish during our dining experience. To accurately represent the dishes, In Situ does not accommodate modifications and has alerted on the menu that the dish is “very spicy.” Eat this one last, or you won’t taste anything else! 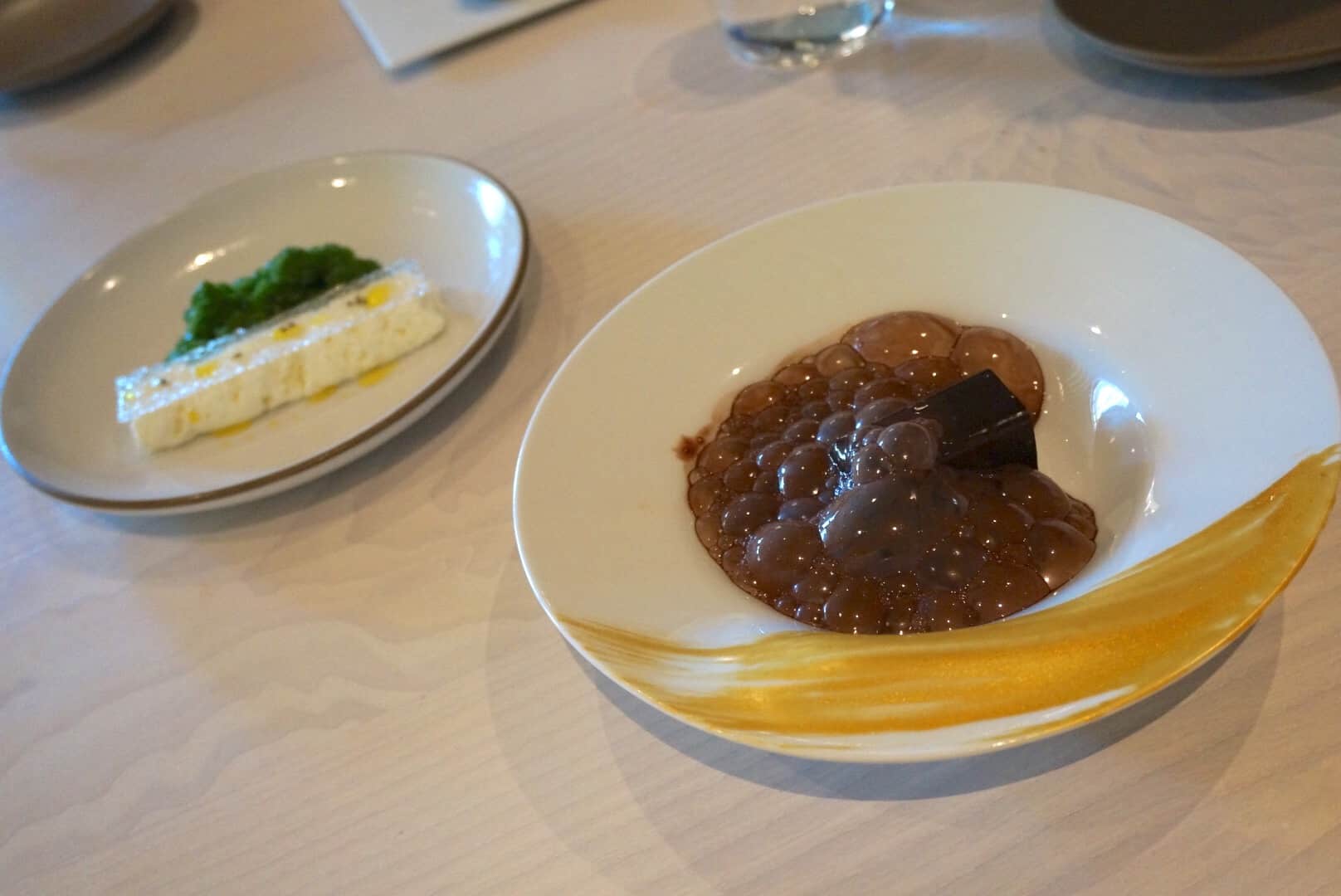 Pin It
For dessert, we went with the Interpretation of Vanity from Andoni Luis Aduriz’s Mugaritz in Errenteria, Spain, as well as the Wood Sorrel and Sheep Milk’s Yogurt by René Redzepi’s Noma in Copenhagen, Denmark.  Out of the two, the Wood Sorrel and Sheep Milk’s Yogurt was our favorite as the granita and the light yogurt were very refreshing. The Interpretation of Vanity, with chocolate cake, cold almond cream, bubbles and cocoa, was also a fun dish for milk chocolate lovers.

In Situ is open for lunch seven days a week from 11AM – 4PM and has extended service for dinner from 5PM-9PM Thursday through Saturday. It has a separate dining room and lounge menu so if you are eating in the dining room and would like an item from the lounge menu, such as Dominique Ansel’s Sage Smoked Dark Chocolate Brownie, you’d need to pay and move over to the lounge to order that item. Parties of 5 or more are seated at a communal table.

While you are at the new SFMOMA, renovated and expanded by Snøhetta and reopened in May 2016 after being closed for three years, check out the seven floors of exhibition space with paid admission. SFMOMA is currently the largest modern art museum in America. The MOMA offers free public access in the ground floor galleries, including Richard Serra’s massive Sequence, and free admission for visitors age 18 and younger. 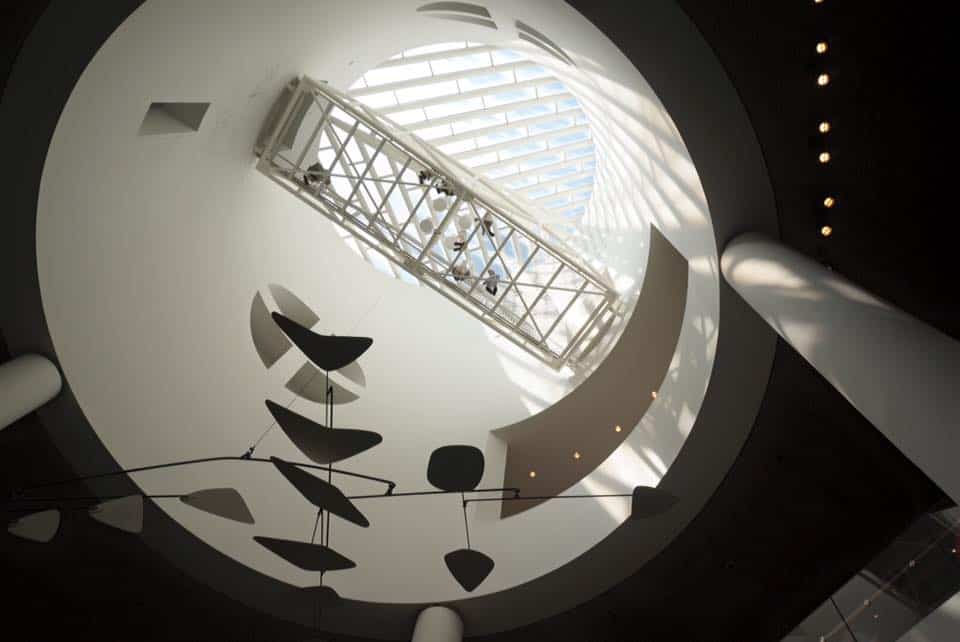 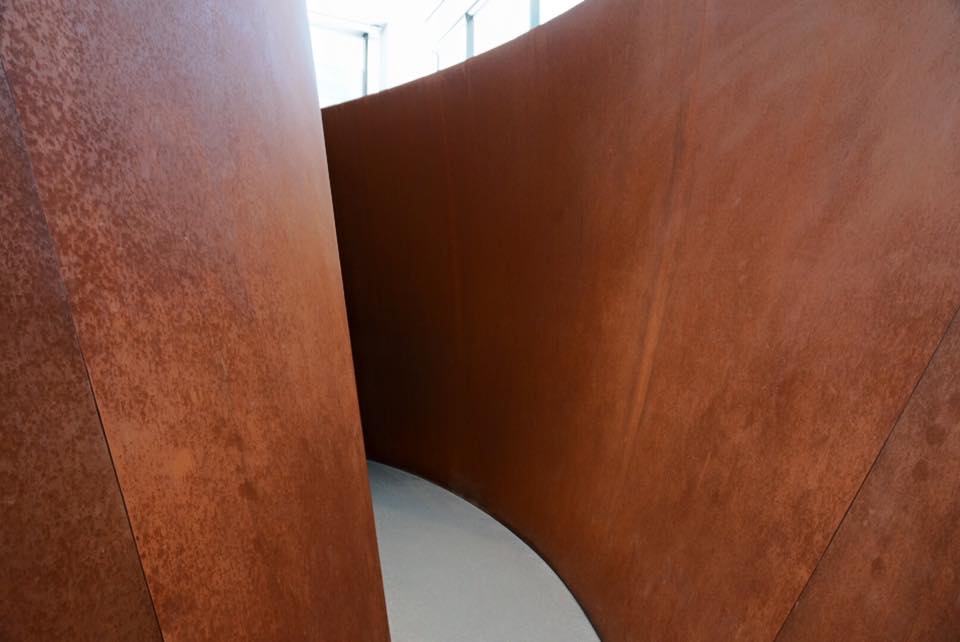 The 7 Best Donuts in San Francisco

The 9 Best Bakeries in San Francisco