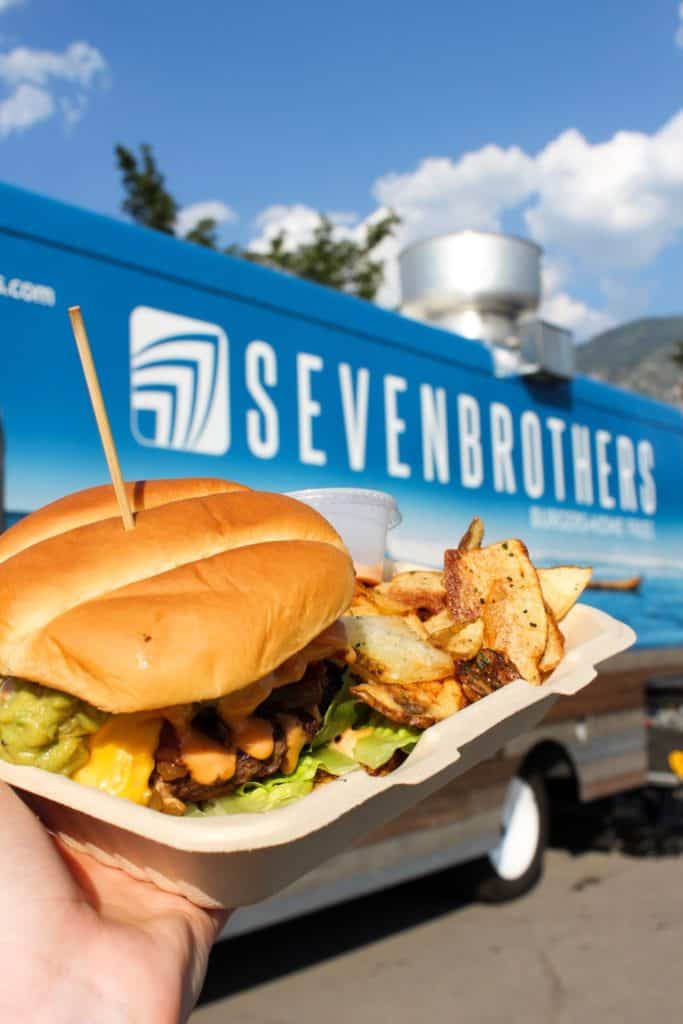 I am in love with two things in this world: the islands of Hawaii and hamburgers. One of my all time favorite hamburger joints in Hawaii has made it’s way to Utah, via food truck. I am too stoked for words because Seven Brothers is fresh, delicious, and extremely family oriented! 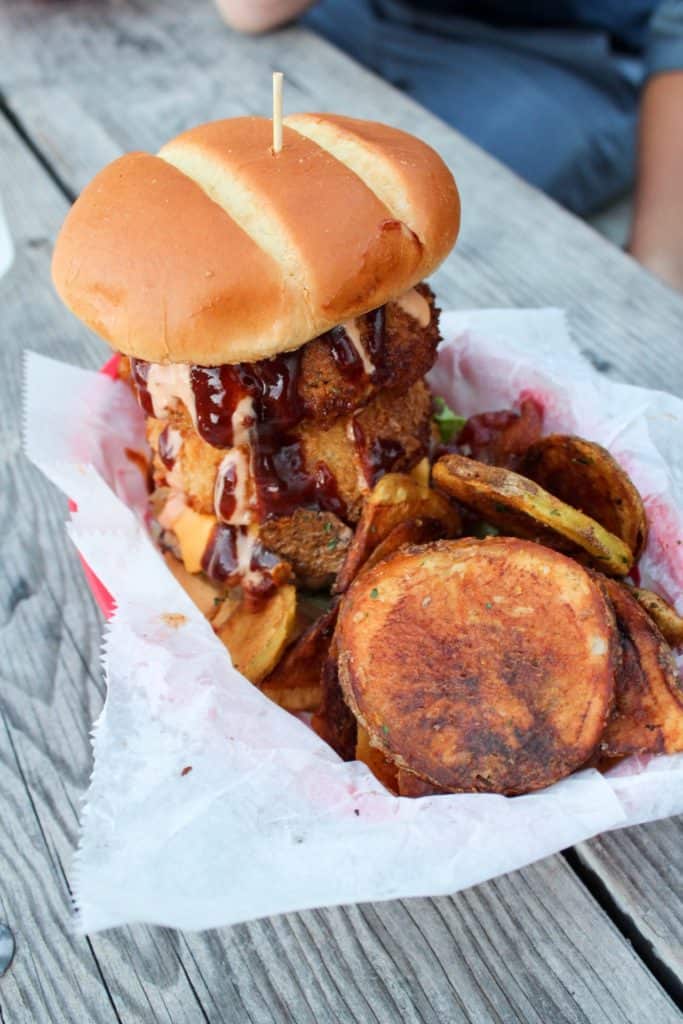 My favorite burger is the paniolo burger. Paniolo is a word used to describe Hawaiian cowboys. You can see where this is going, right? The paniolo burger is stacked high with fresh grilled pineapple, 2 strips of bacon, lettuce, tomatoes, 2 monster onion rings and topped with paniolo BBQ sauce. My mouth isn’t big enough to fit the whole thing inside, but I’ve seen it done. If you’re small like me, eat one of the onion rings by itself and you’ll have to problems whatsoever enjoying this tall cowboy burger. 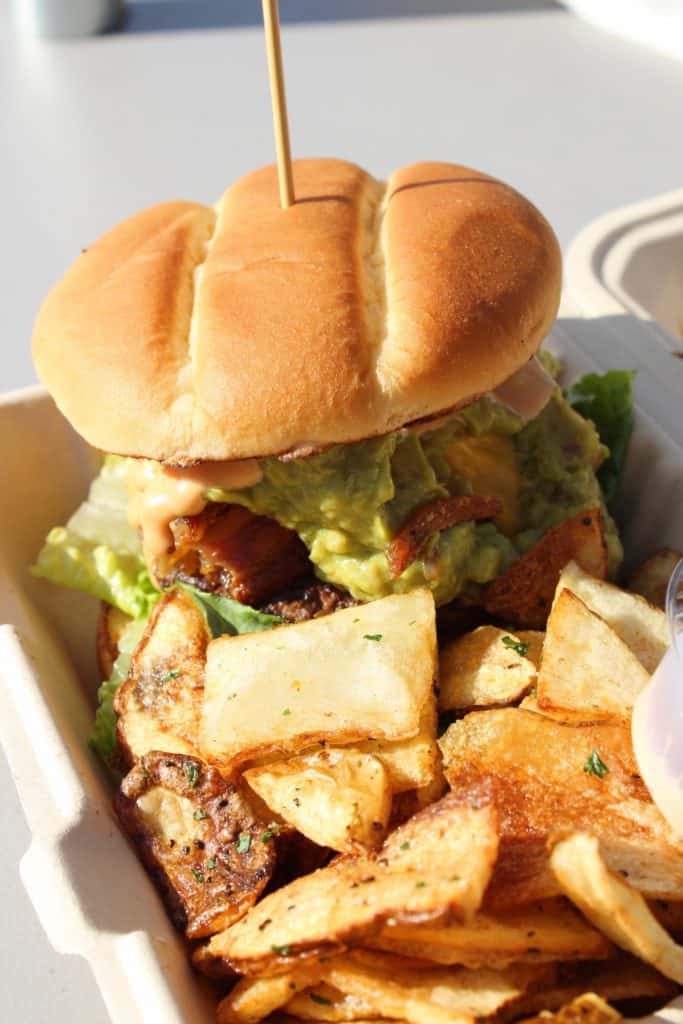 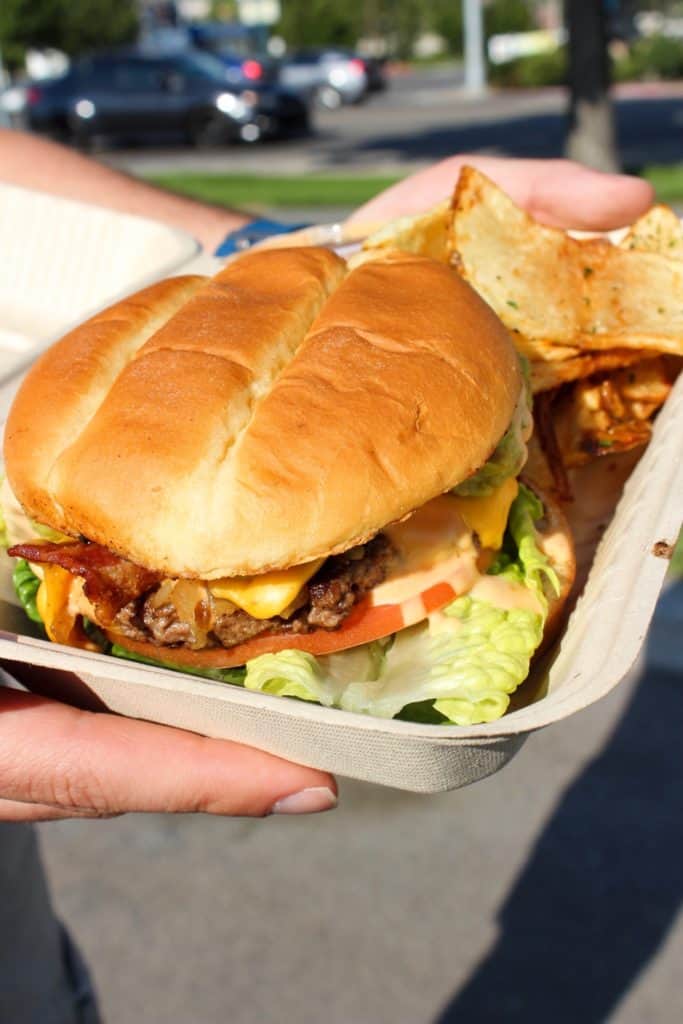 Another popular burger is the Shem burger, being named after one of the seven brothers. The Shem burger is topped with the usual lettuce and tomato, but also sits nicely with homemade guacamole, 2 strips of bacon, and house sauce (a delicious version of fry sauce). But no Shem burger is complete without home fries. Seven Brothers offers thinly sliced potato fries that are seasoned and fried to perfection. I personally like piling them in my Shem burger, but the fries can definitely hold their own outside of the burger. 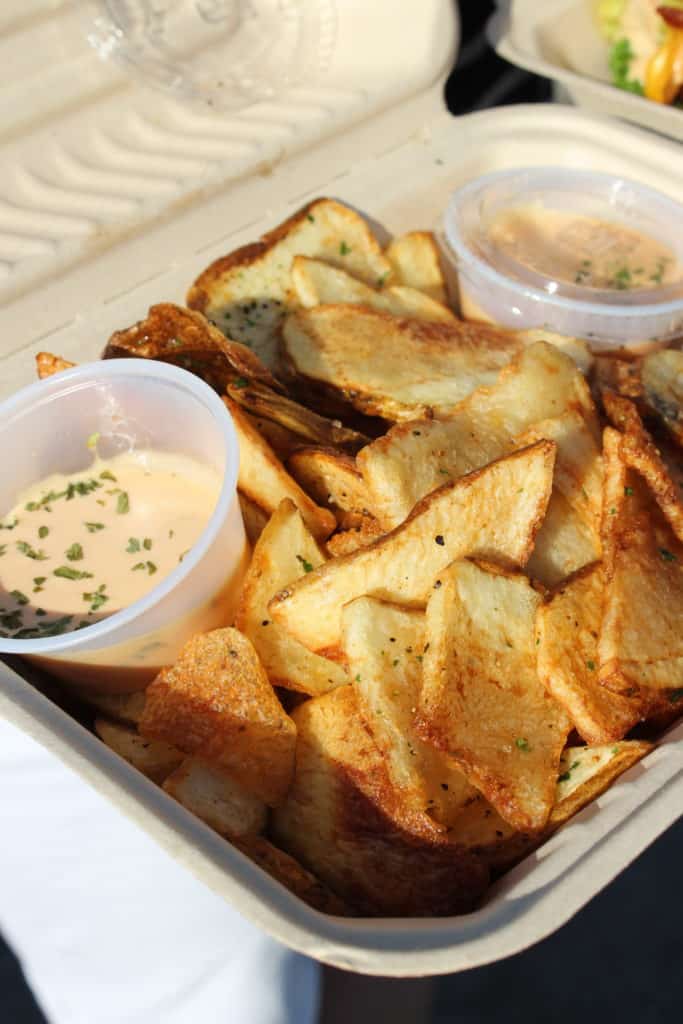 Story time! When I was a student at Brigham Young University – Hawaii, I had the privilege of working for the owners of Seven Brothers, the Hannemann family. I worked at their first establishment (which at the time was called Kahuku Grill). Eventually, the owners expanded a second location to Laie, Hawaii and Seven Brothers was born. The name of the new establishment was inspired by the seven sons of the owners, who are all awesome guys (and I heard that the youngest one is still single)!

All of the brothers contributed to the family business, their goal being to provide the community and it’s visitors with a true Hawaiian experience, rich with surf and beach culture. What keeps me coming back to Seven Brothers is the feeling that I am a member of the family. At each establishment, there is a spirit of love that comes from the Hawaiian spirit of Aloha. Whenever I leave Seven Brothers, I feel significantly better about life and myself. I feel like I belong, which is one of the greatest feelings in the world. The Seven Brothers mantra is “more than a meal” – I’ll be the first to say that visiting Seven Brothers has always been more than a meal for me. 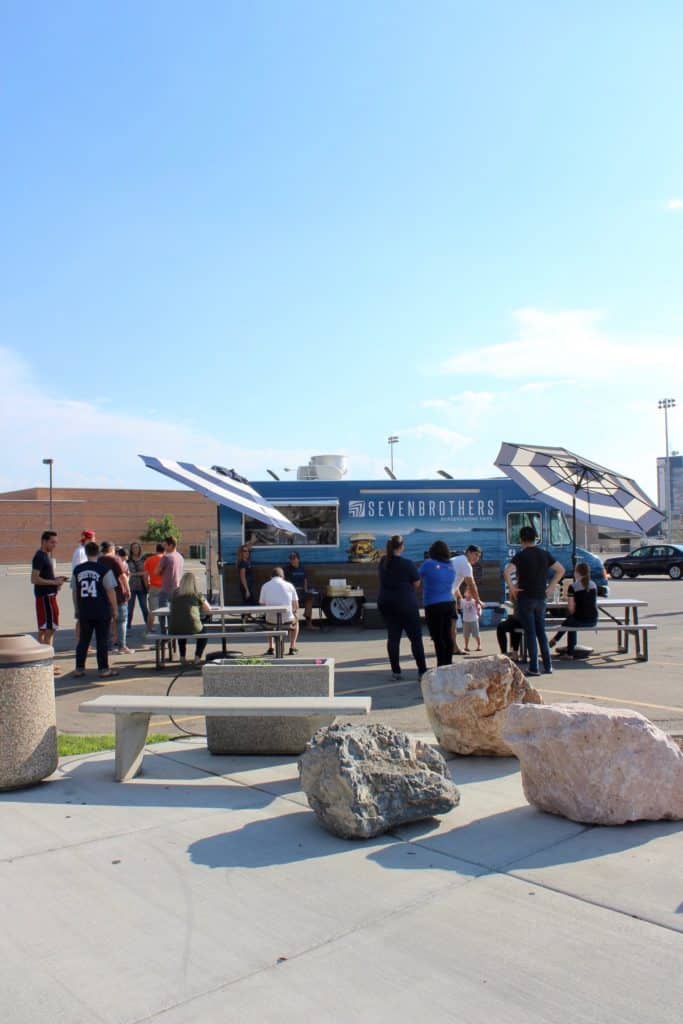 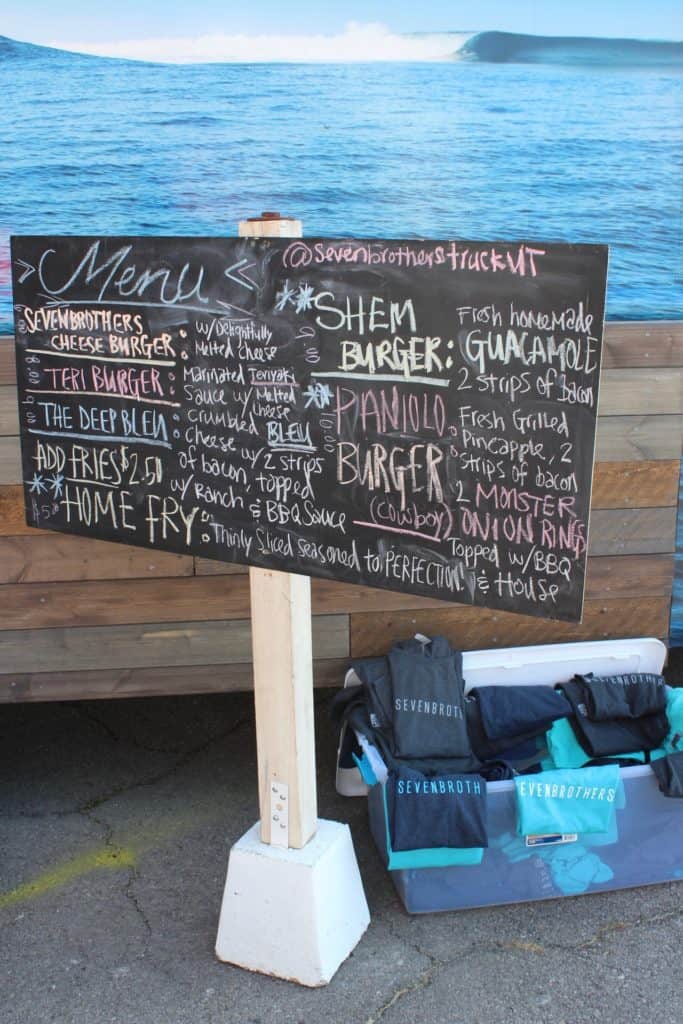 Now Arizona and Utah can be part of the family too! There are food trucks in both states. Upon my last visit to the Utah food truck, I learned that Seven Brothers will open a restaurant in Saratoga Springs come September (and possibly another location in Provo). Before you leave this page, you need to follow Seven Brothers on Instagram or Facebook. They post where they are and when they’re open every day. Come be a part of the family! Come and enjoy the food and the love. 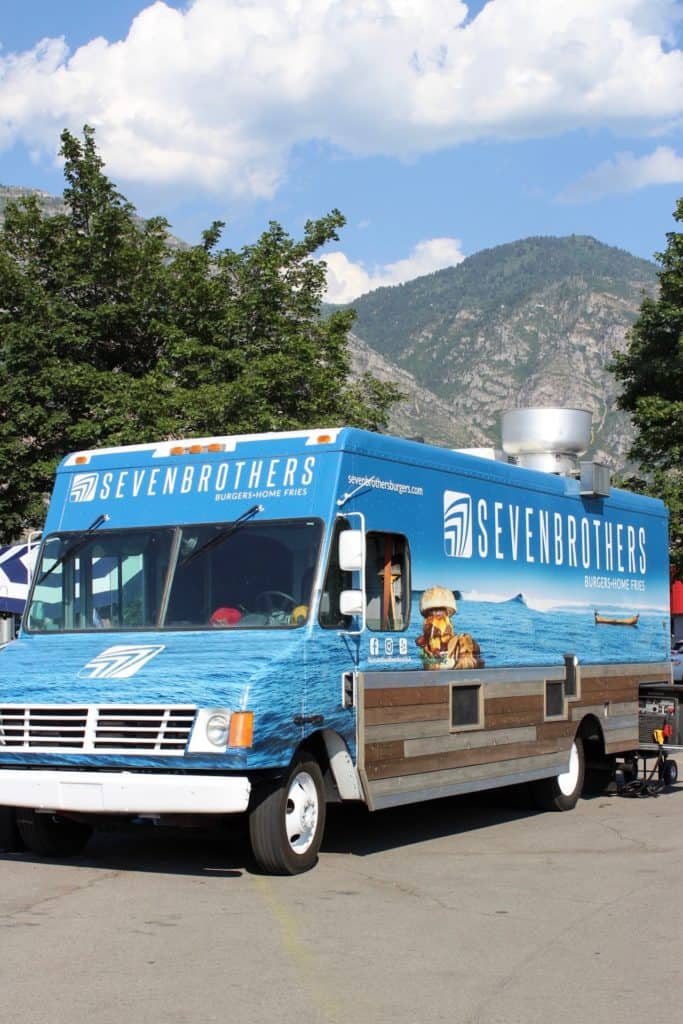 If you have plans to visit Hawaii soon, you NEED to stop at the Hannemann’s two other Seven Brothers locations: Seven Brothers at the Mill (previously known as Kahuku Grill) & Seven Brothers Laie. The food trucks in Arizona and Utah are amazing, but they do not offer the yummy dinner plates or salads that are offered in Hawaii. 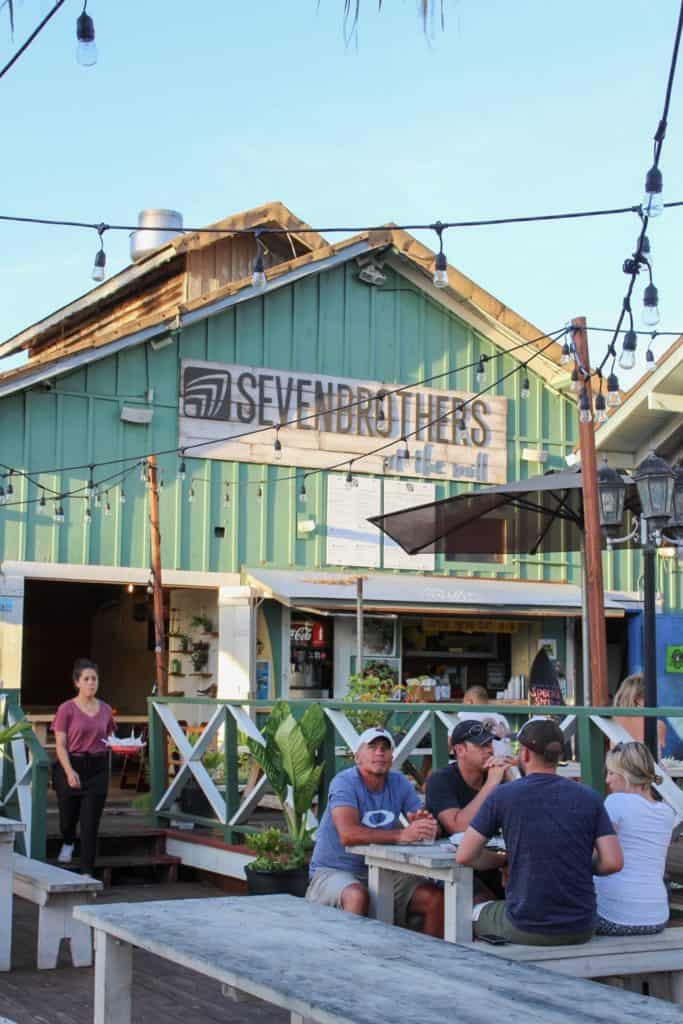 My all time favorite dish at the Mill is the hand battered coconut macadamia nut shrimp. It’s seriously what dreams are made of. The shrimp is fresh, crunchy, sweet and tasty. There’s always the garlic lovers shrimp plate, if sweet things aren’t your forte. You seriously cannot go wrong with either of these dishes. 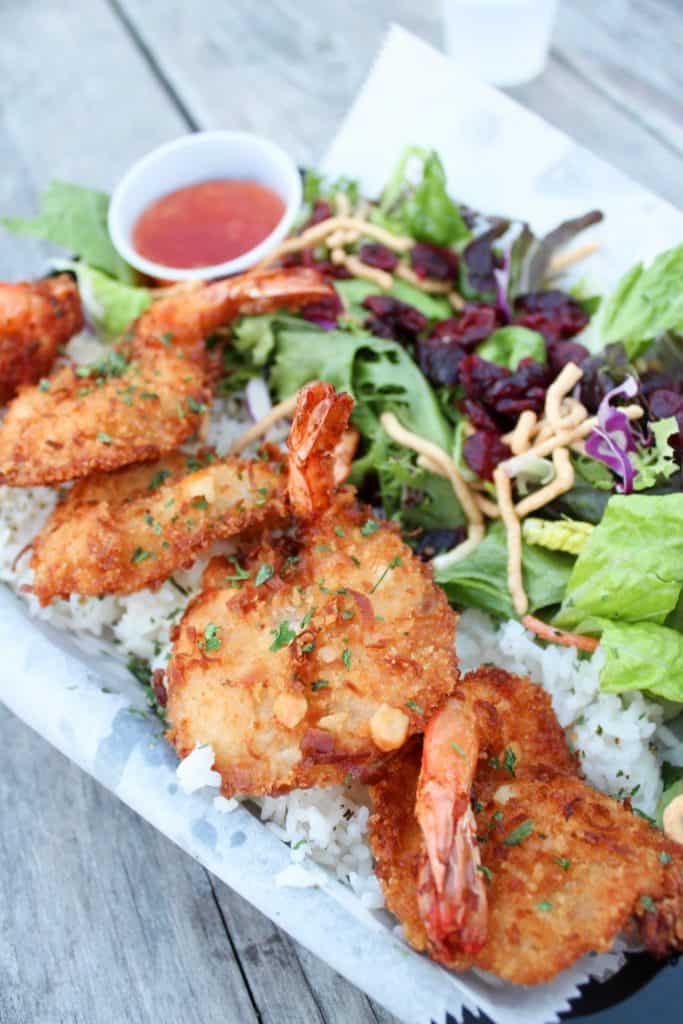 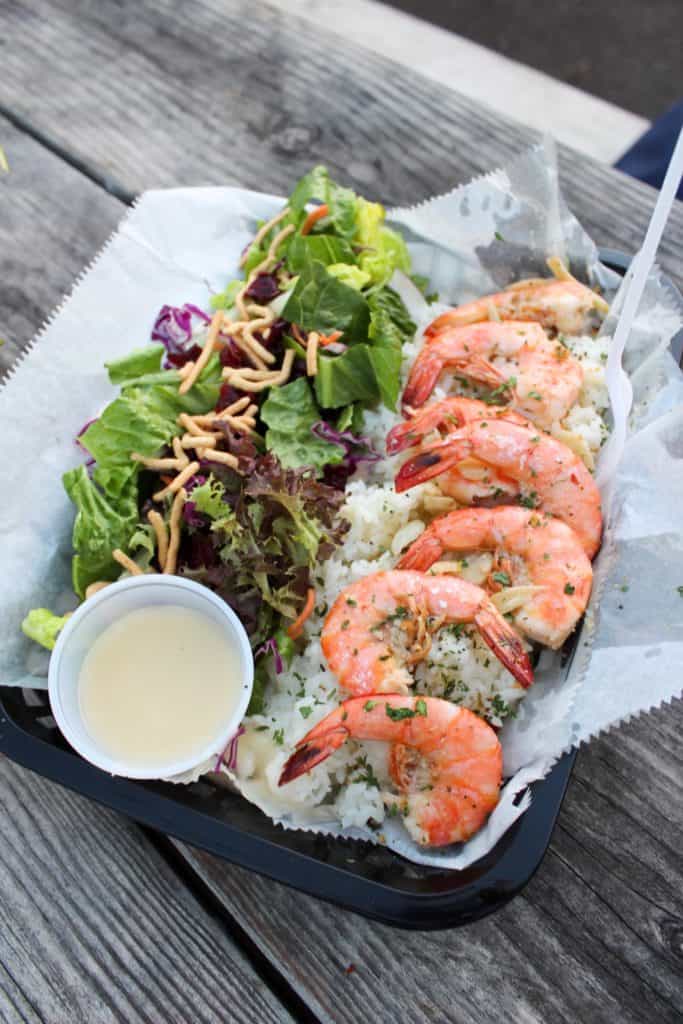 There’s something for everyone at Seven Brothers. There are shrimp and fish plates, delicious and fresh salads, burgers, sandwiches as well as desserts. Out of all of these things, I recommend Seth’s bleau bacon salad, the grilled herb ahi steak plate, Seek’s Pesto burger, the Bruce Irons burger, Mom’s homemade banana bread sundae, and treat yourself to one of their shakes, preferably chocolate. 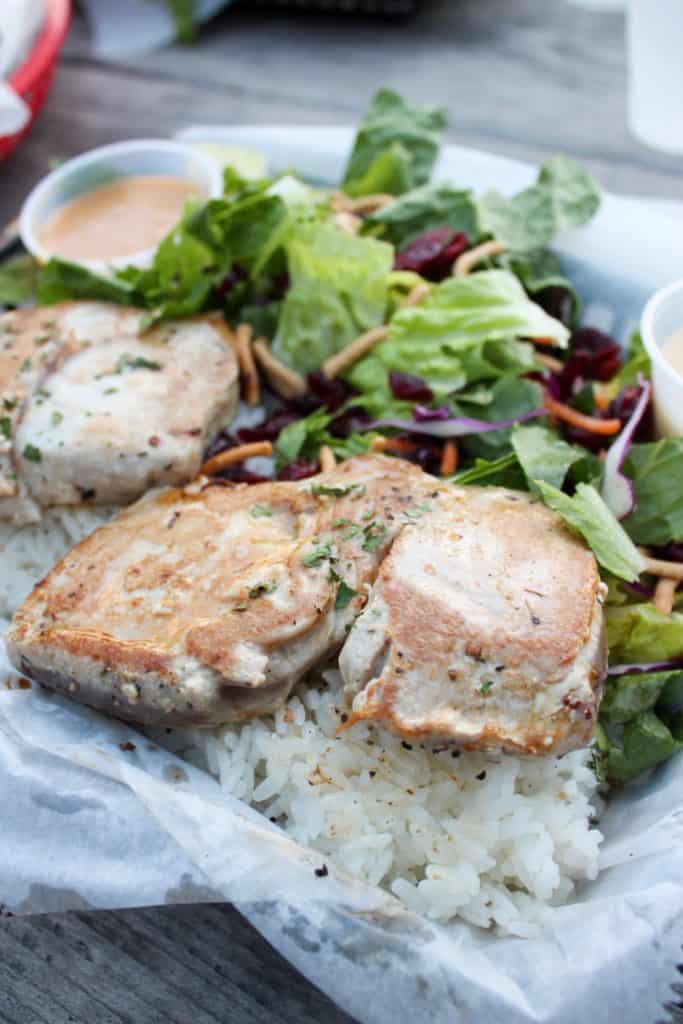 You don’t want to miss out on this family business or the fun they provide! The food and the feeling of being part of the family is worth it! Mahalo for reading, and aloha!

Explore the other 172 Related Posts

After much research (aka eating) and deliberation, we are excited to announce our picks for the very best Sugar House Restaurants. Searching for breakfast, lunch, and dinner choices that won’t disappoint? Look no further! Check out our list of…
Read the Post

Is there a more well-rounded meal than a burger and fries? We’re hitting every category on the food pyramid. Grains, plenty of protein, dairy, vegetables- even tomatoes can count as a fruit! While a burger for every meal probably…
Read the Post

What are the BEST restaurants in Salt Lake City? Who makes a good breakfast downtown? My wife and I are celebrating our anniversary tonight- where should I take her? Where can I go for the best burger? All questions we get asked…
Read the Post

One of the questions I get asked the most, without doubt, is “What should I do while I’m in Salt Lake City?? Whether you’re from SLC, here for a few days, or passing…
Read the Post

It’s no wonder why everyone screams for ice cream – it’s decadent, sweet, and satisfying! As Utah County continues to grow, so does its sweet tooth. New ice cream shops are popping up left and right, and everyone is…
Read the Post

If you’re anything like the Female Foodie team, you love long walks, newborn puppies, and sugar after every last meal. We find few things more satisfying than topping off an already delicious lunch or dinner (or even breakfast!) with…
Read the Post

Without fail one of  the most popular and favored genre of food across the board is Mexican. And after talking the foodie talk and figuring out what people go bananas for, we’ve come to the simple conclusion just about…
Read the Post

We all know what the most hyped Salt Lake City restaurants are. Red Iguana, Takashi, The Copper Onion, and Pretty Bird Chicken (just to name a few) are frequented, Instagrammed, and discussed by the ever rapidly growing foodie scene here…
Read the Post

In Salt Lake City there are four seasons: winter, spring, summer, and fall. But any true Utahn will tell you that in months like March, April, and even May you might have sunshine one day and snow on another.…
Read the Post

Utah ski resort dining has come a long way since the days of just burgers and french fries. And while there is nothing wrong with a decadent cheeseburger, sometimes a little variety is appreciated, and the offerings at these…
Read the Post

Whether you’re a food fanatic or not, one thing our readers have in common is that nearly everyone is aiming for a healthier lifestyle including finding healthier places to eat! Although Female Foodie certainly isn’t a healthy eating blog…
Read the Post

We are huge fans of chocolate, but not just any chocolate- good, rich, quality chocolate. Whether it’s Valentine’s Day, Christmas, or just for the heck of it, we want to make sure you’re armed with the best chocolate (and…
Read the Post

The 5 Best Cups of Hot Chocolate in Salt Lake City

There is nothing quite like cozying up to a rich, heart-warming cup of hot chocolate. With the coldest temperatures of the year coming and going, I’ve had several requests from friends and foodies alike, searching for the best hot…
Read the Post

This post is sponsored by CoreLife Eatery. Oh hey, January. It’s hard to believe that we are at the beginning of a brand new year yet again. Maybe you set 10 resolutions for 2019, or maybe you haven’t given…
Read the Post
More Posts
Load More Posts