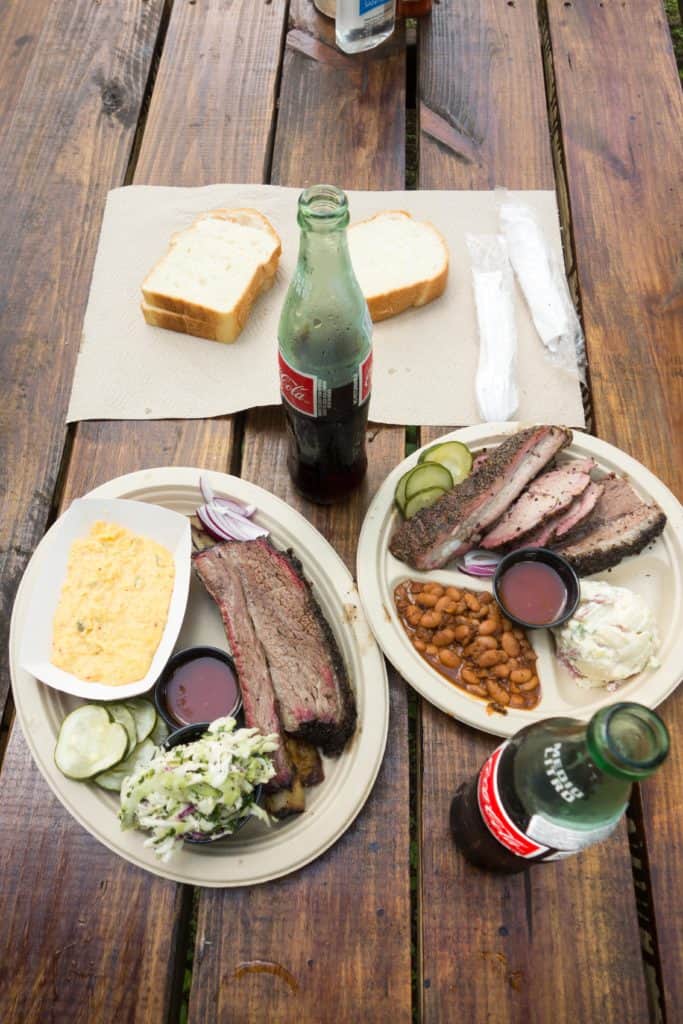 Pin It
Tom Micklethwait started with Micklethwait Craft Meats with a $600 Comet trailer from 1960.  From there he worked on his days off from Vespaio (an Italian joint on South Congress) fixing the Comet up.  From there, he acquired his old smoker that also needed to be fixed up.  After months of hard renovation work, Tom now had a place to start barbecuing.  But Tom was in for a couple of surprises. 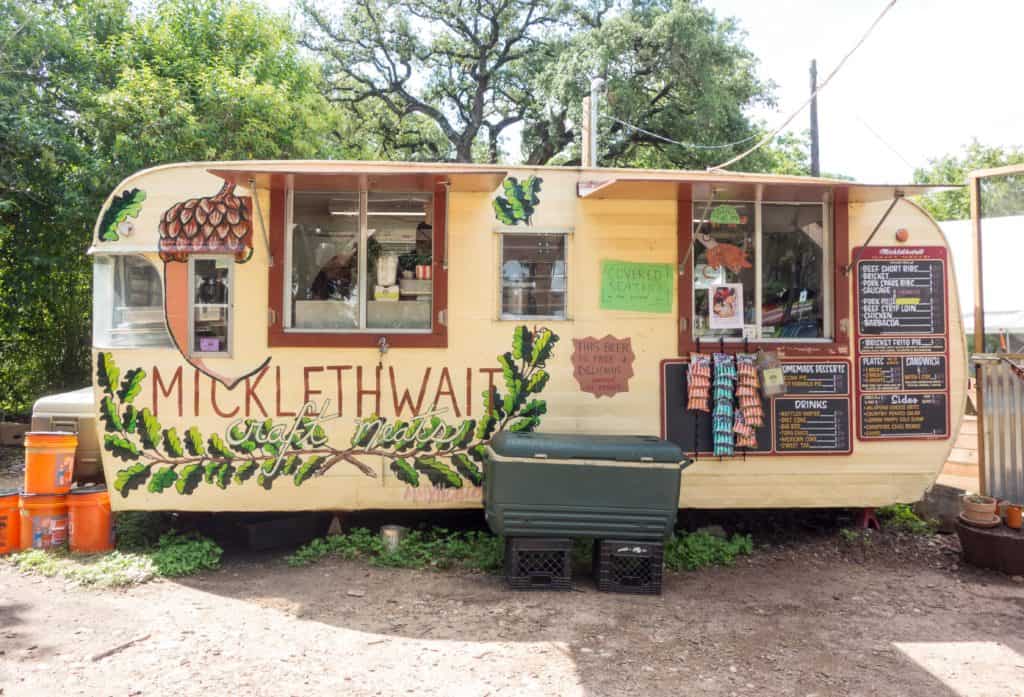 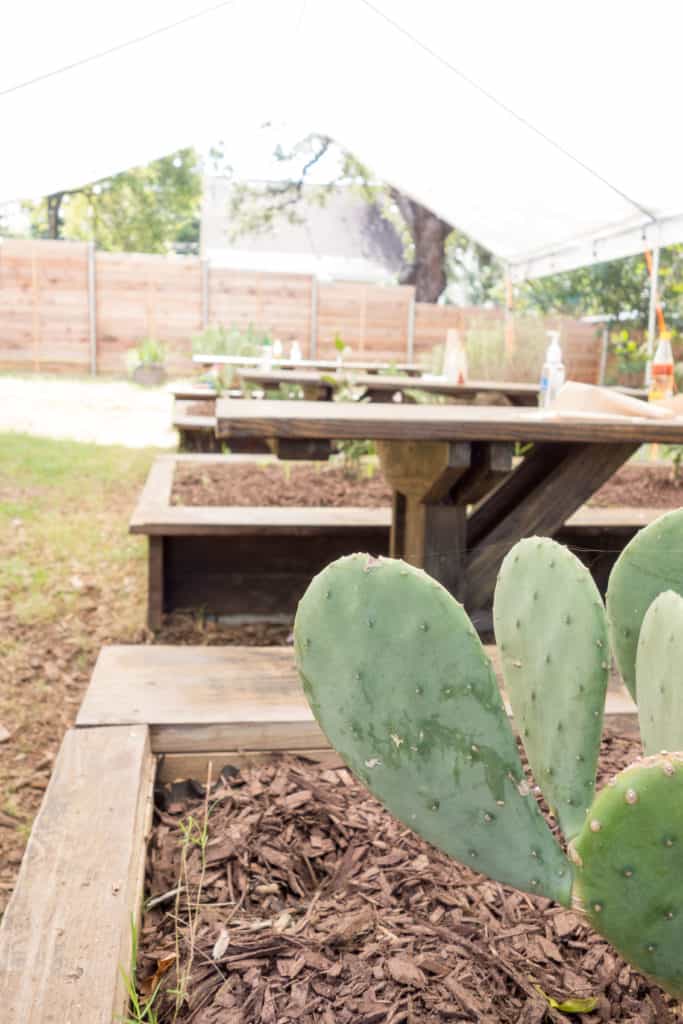 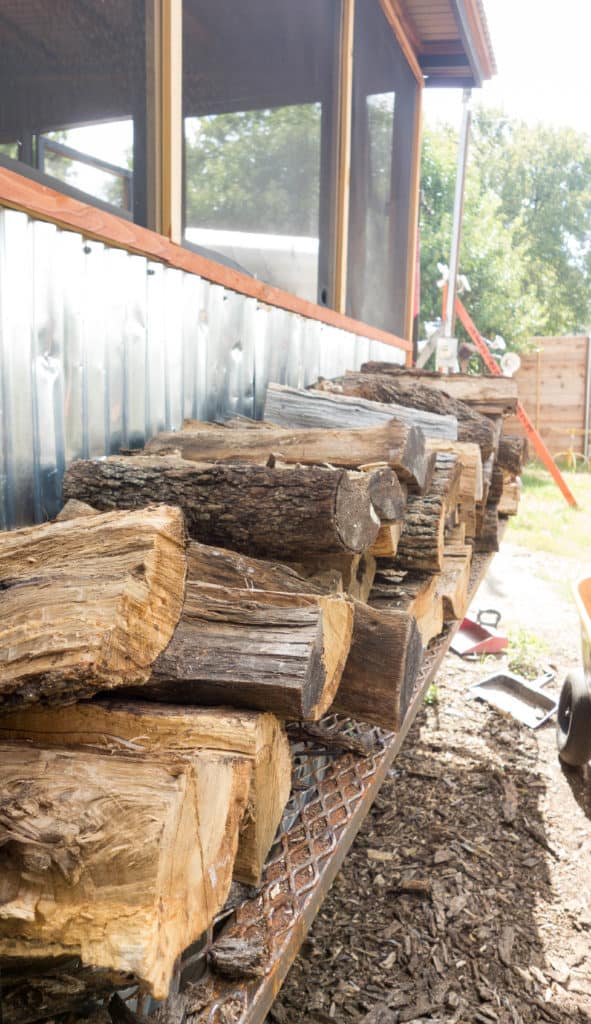 Pin It
Creating beautiful barbecue can be an ugly amount of work.  According to Tom,  “At the time it was sort of this romanticized idea of life or something, I don’t know.  But the reality of it is like oh, you get to work 80 hours a week for over a year. And it’s hot. I think the hottest I’ve temped the inside of the trailer at was 145 or 150 degrees. Working in there is kind of miserable sometimes, but it’s also fun.” *  You can taste all of the work and love that Tom puts into his barbecue in the bark of his meats.  For you barbecue novices, the bark is the crusty, chewy, smokey, salty exterior of the meat.  The bark is also the best part of any piece of meat.  Most well barbecued meats (excluding sausage) should have an earthy smell with a deep brown or black coloration to the bark.  If you don’t see this on your meat, you’re not eating good barbecue. 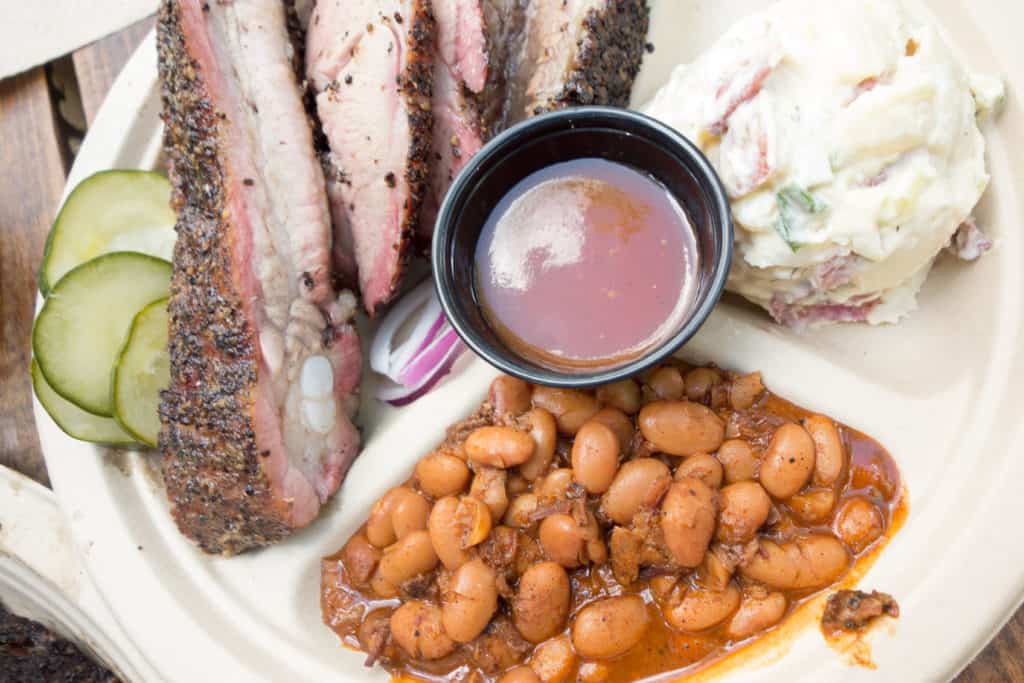 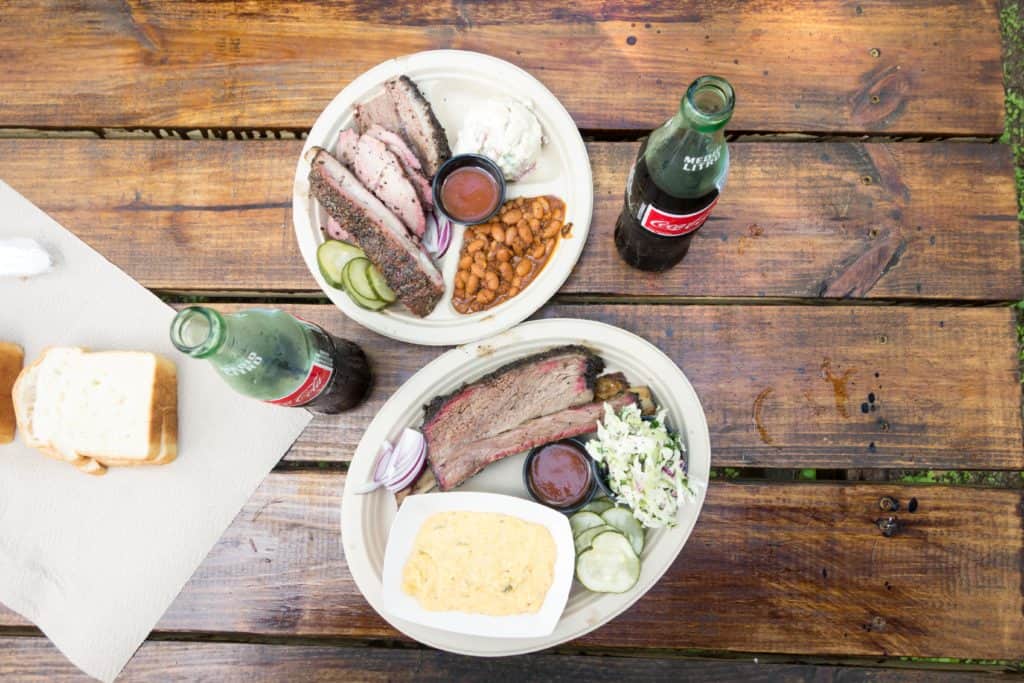 Pin It
Texans typically have three religions – God, Football, and Barbecue, in that order.  So when someone starts reinterpreting theology, zealots become a little unsettled.  Tom recalls his early days when a few Texans protested that there was not Big Red served with their brisket. *  (Big Red is an appalling drink concocted of bubble gum flavoring and high fructose corn syrup.  It’s truly disgusting swill, but expected barbecue tradition so, Tom eventually caved.)  Micklethwait Craft Meats proudly serves half liters of Mexican Coke in ice-cold bottles along with other, lesser drinks.  Also, there are cans and cans of FREE BEER!  Eventually, those zealots became converts (perhaps it was the beer) to Tom’s reinterpretation and have been coming to his trailer in droves. 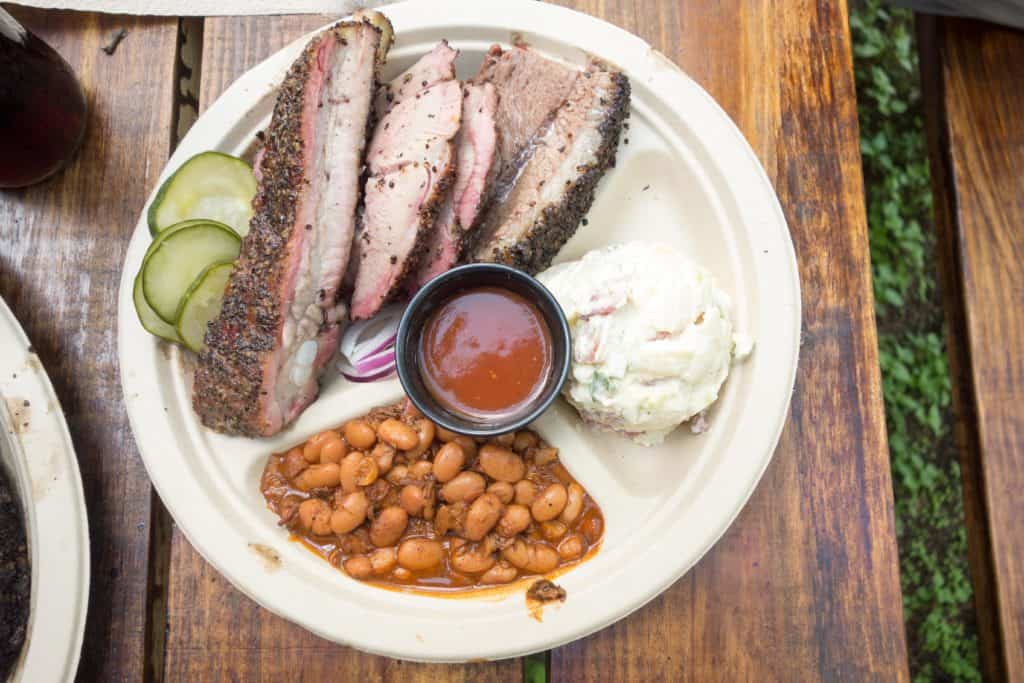 Pin It
Micklethwait Craft Meats has a set menu and like most barbecue places in Texas, closes when it sells out.  They do offer daily specials, but those specials aren’t advertised or on any kind of schedule so you’re always in for a treat.  Today’s special was an absolutely gorgeous lamb leg so tender that I cut it with a plastic knife.  Next up was a gargantuan beef rib.  Because of their size, the beef ribs are the most limited cut of meat, so come early if you want a taste. This is my absolute fave and the true test of a pit master is if his or her beef is tender and moist with excellent flavors.  My husband got the pork rib and moist brisket.  There are three categories of brisket in Texas, lean, moist and extra moist.  This ranking describes how much fat will be on the meat.  Texans will know that you’re “not from ’round here” if you order lean.  The fat is where all the flavor is and it melts in your mouth.  Every cut of meat was utter salty, sweet, peppery perfection.  While the meats are perfection, the sides are transcendent. 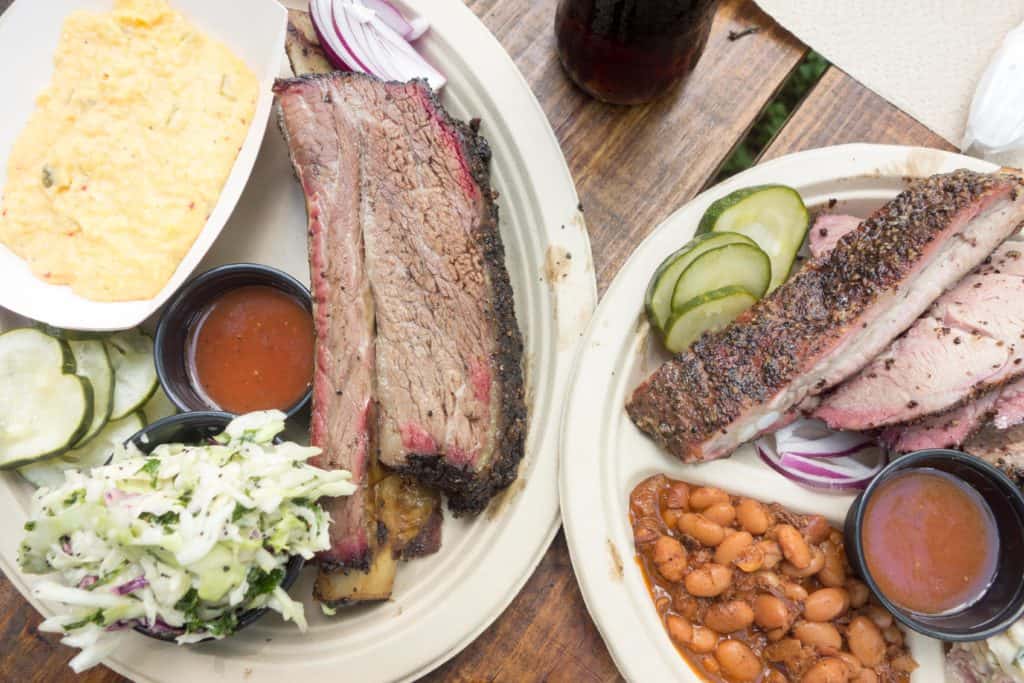 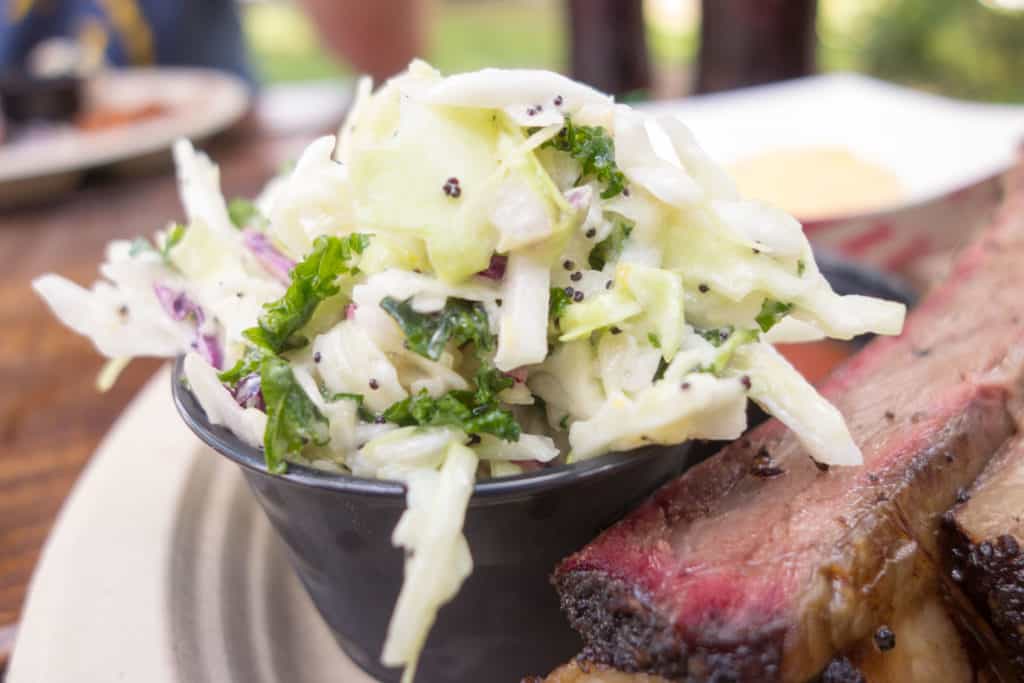 Pin It
I am not exaggerating when I say that Micklethwaite Craft Meats’ Lemon Poppy Seed Coleslaw is the best coleslaw I have ever eaten.  Tom forgoes the typical mayo based dressing in favor of a sweeter, lighter vinaigrette flavors.  The sweet lemon and crunch of cabbage perfectly pairs with the flavors of deep, smoked meats.   Now for the Ranch Style Beans – there is quite the process to create these humble-looking beans.  Tom saves the bones from their meats and creates a beautiful stock.  This beautiful stock is used to slow cook those unpretentious beans to which all the day’s meaty scraps are added.  In keeping with barbecue canon, thick-sliced, homemade pickles are served and make a welcomed addition to greasy brisket.  Then there are Jalapeno Cheese Grits.  Typically, cheese grits have a lot of butter with some cheddar cheese, but Tom hits his grits with cheddar, cream and gorgonzola cheese.  These are truly delectable and creamy beyond belief.  Finally, there’s the Potato Salad.  Micklethwait Craft Meats’ Potato Salad is complex and light-as-air.  It has just hint of mayo, but balances the mayo with vinegar, parsley and capers.  If you aren’t bursting at the seams yet, there’s still dessert. 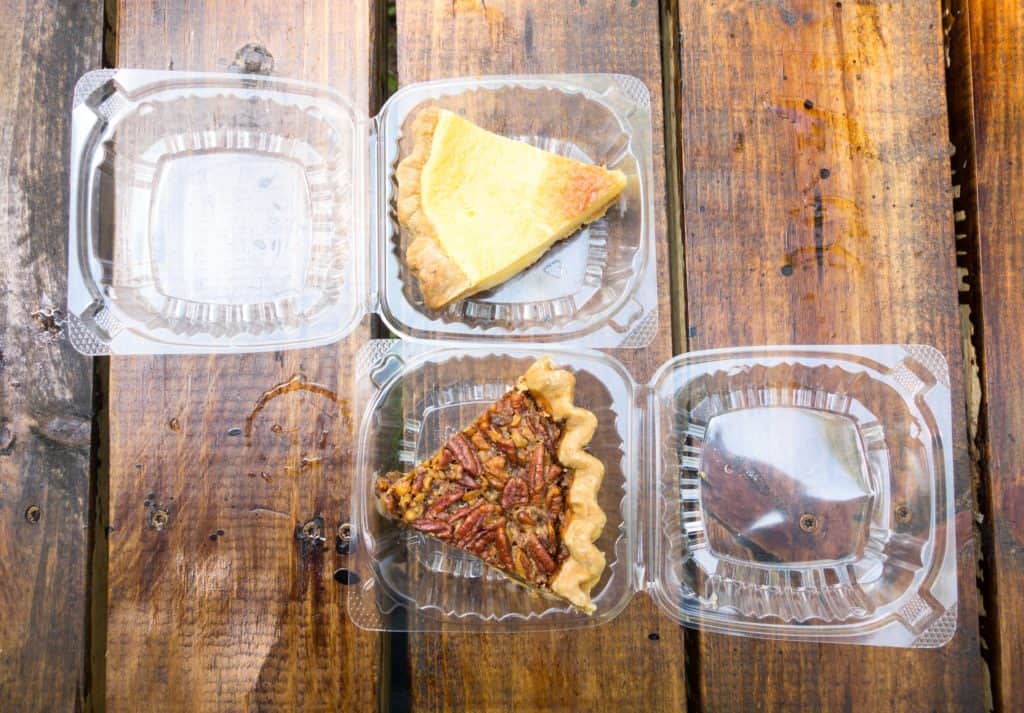 Pin It
Dessert is one area where William Ankeney adheres to the dogma of barbecue.  You read that right, William.  Tom worked with William back in their Vespaio days and also gets credit for their delicious desserts.  Buttermilk Pie is a classic Texas tradition.  Micklethwait Craft Meats serves up their deliciously tangy custard pie in a simple, plastic clam shell container.  They also serve pecan pie and it is the best pecan pie in Austin.  Unlike traditional pecan pie, which can be cloying and syrupy in all the wrong ways, William’s pecan pie is firm and complex and a delightful finish to a spectacular meal.

When you come to Austin, do yourself a favor and skip the line at Franklin’s and head down the street to Micklethwait Craft Meats, where the beer is free, but the water will cost you.

*Quote from “Everything From Scratch: Austin Barbecue Trailer Micklethwait Craft Meats” – by Whitney Filloon at eater.com