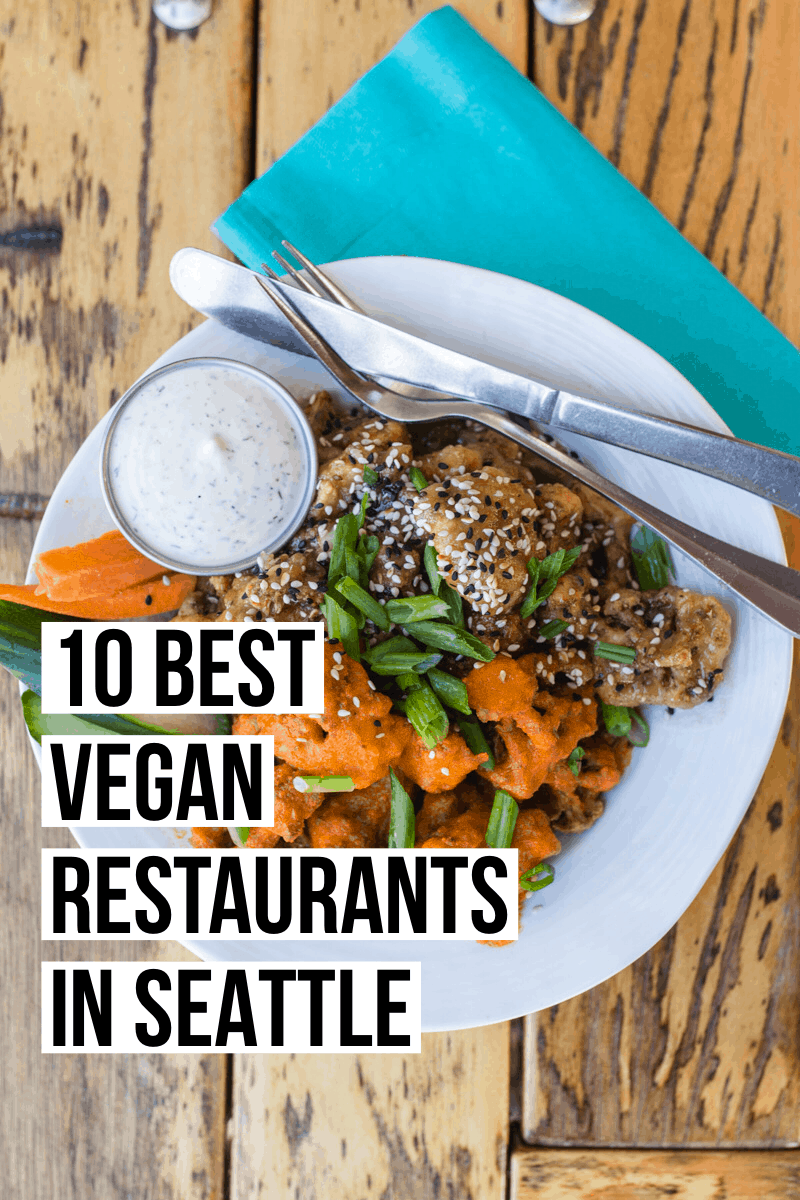 It should come as no surprise that Seattle, the land of all things progressive, takes their vegan food seriously. This city has an excellent variety of plant-based dining options that are never boring or one-dimensional, proving that vegan fare is much more than sad salads and smoothies that taste like soil. Basically, if you’re vegan, Seattle is the place to be.

Sink your teeth into the best vegan restaurants in Seattle

But even the most dedicated omnivores will find it hard not to obsess over Seattle’s best veggie-friendly eateries. We love the fact that many restaurants in Seattle offer vegan options, but for the list we’ve compiled below we’ve exclusively focused on restaurants whose menus are 100% vegan, right down to the last ingredient. We can’t wait for you to sink your teeth into the top 10 vegan restaurants in Seattle! 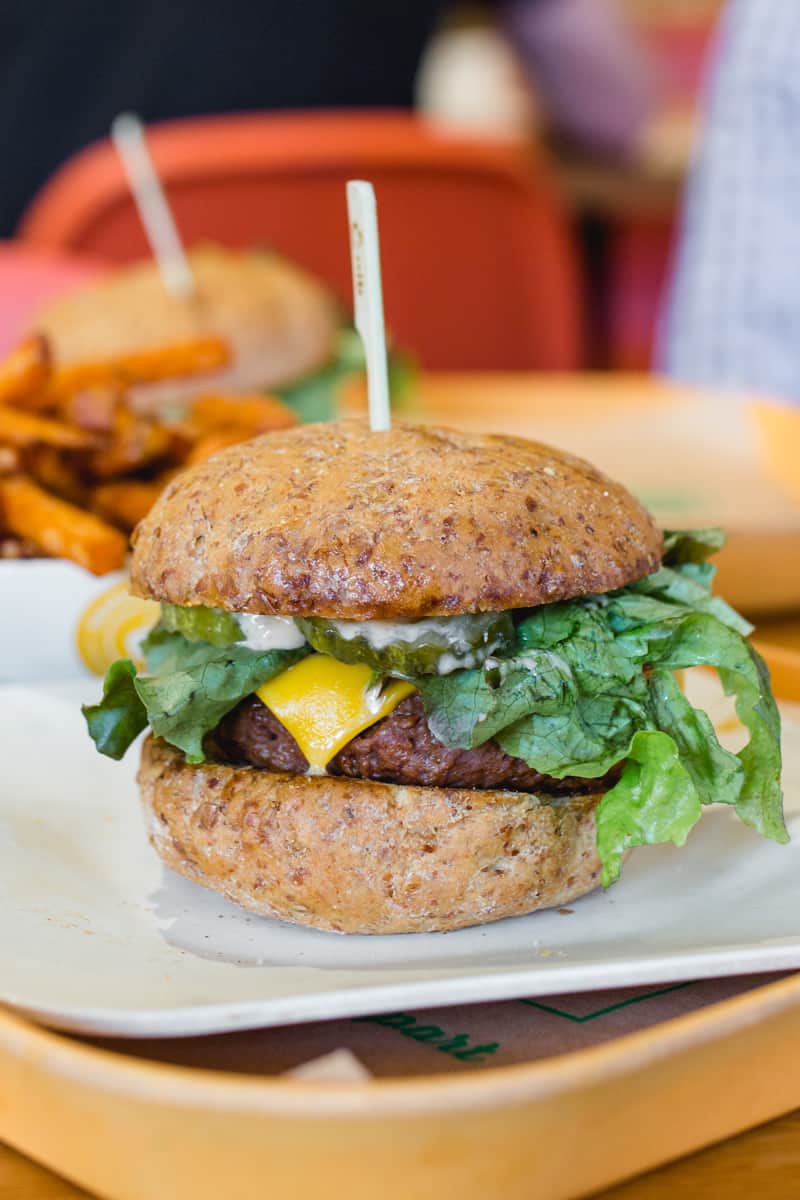 What’s more “Seattle” than eating a vegan burger inside of a Whole Foods? Nothing, and we’re all about it. Next Level Burger is one of our favorite vegan restaurants in Seattle not only because their burgers, fries, and shakes are 100% plant-based goodness, but because they are a company that is steadfastly committed to quality, sustainability, and combating climate change. At Next Level Burger, you’ll find food you can truly feel good about. Choose between a meaty or veggie-style patty, then build your own burger or select one of NLB’s tasty creations. In addition to your burger, don’t miss the sweet potato fries or their hand-spun cookies and cream shake made with coconut soft serve. 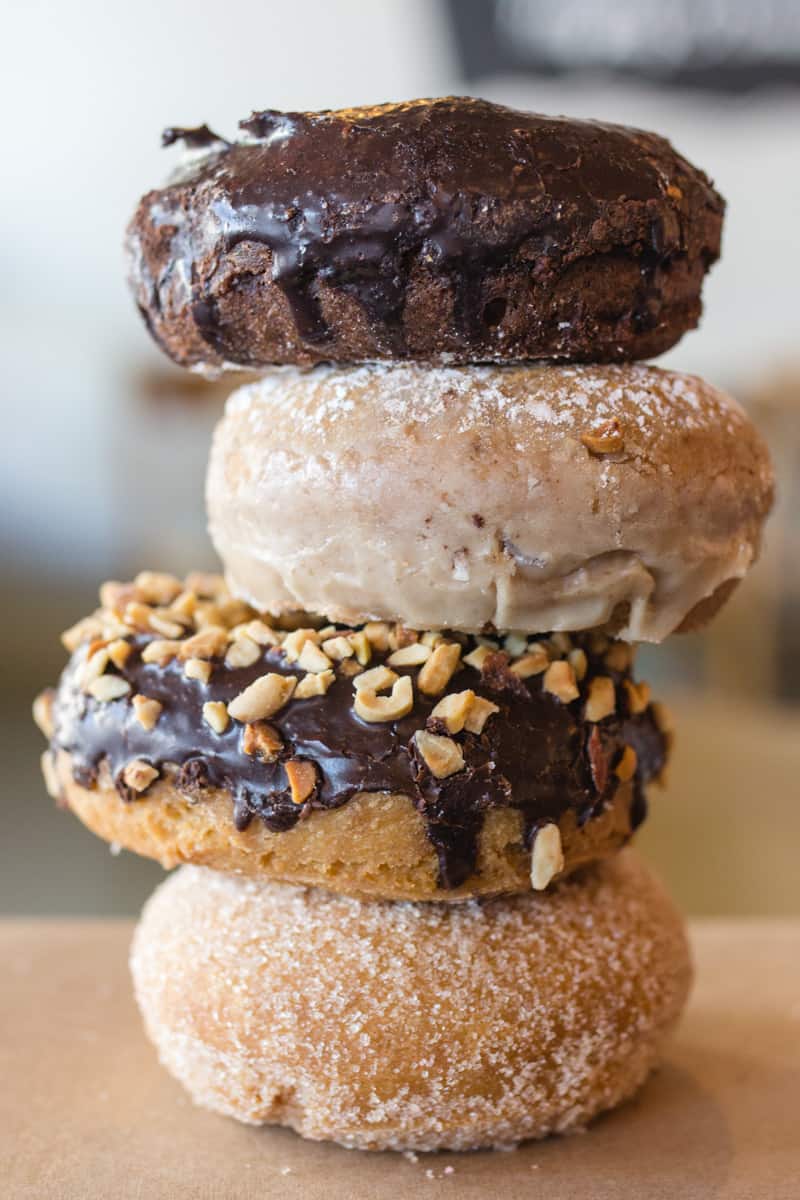 Next up on our best vegan restaurants in Seattle list? Donuts made from plants. Yes, you read that right. Each and every Mighty-O donut is made from scratch using all certified-organic and vegan ingredients, not to mention they are free of preservatives, trans fats, artificial color or flavors, and cholesterol but what’s really important here is that they are freaking delish. If we had to pick a favorite, it would be Mighty-O’s French Toast donut, a spiced cake donut with maple glaze and powdered sugar sprinkled on top. It’s both simple and mind-blowing at the same time. Go early (they open at 6 a.m.) if you want these delectable little dough rings hot and fresh. 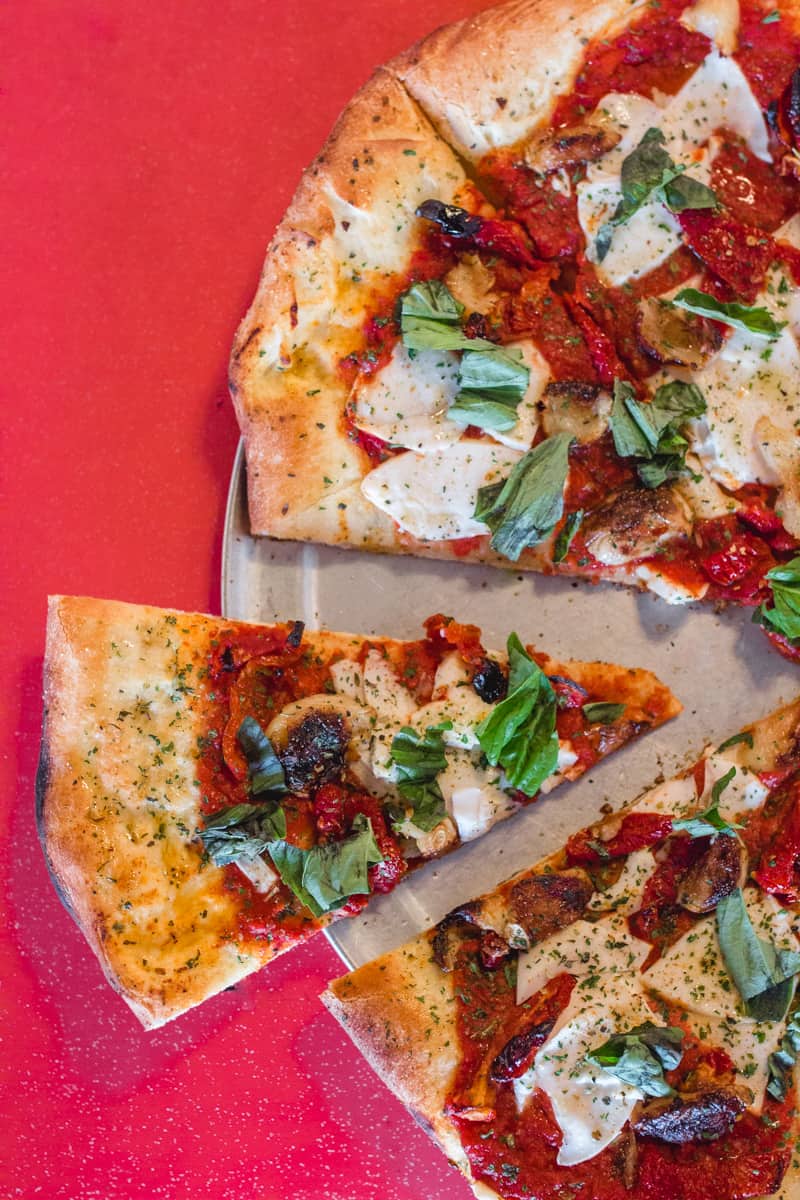 Pizza Pi Vegan Pizzeria claims to be “America’s Oldest Vegan Pizzeria” and while that could very well be true, we aren’t here to fact check. We’re here to eat a slice (or four) of their killer plant-filled pizza. There are exactly zero frills to be found in this tiny, quirky cafe, but the food is amazing so who cares? Pizza Pi’s made-to-order offerings range from tried-and-true classics like Margherita and pepperoni to more inventive combinations, like Mac ‘n’ Cheese or Thai Chicken. And when it comes to their White Garlic Breadstix only one word comes to mind: obsessed. Grab a menu and ring the bell at the counter when you’re ready to order. Anything that comes out of the oven at Pizza Pi is sure to solidify the fact that this place deserves a spot on our best vegan restaurants in Seattle list. 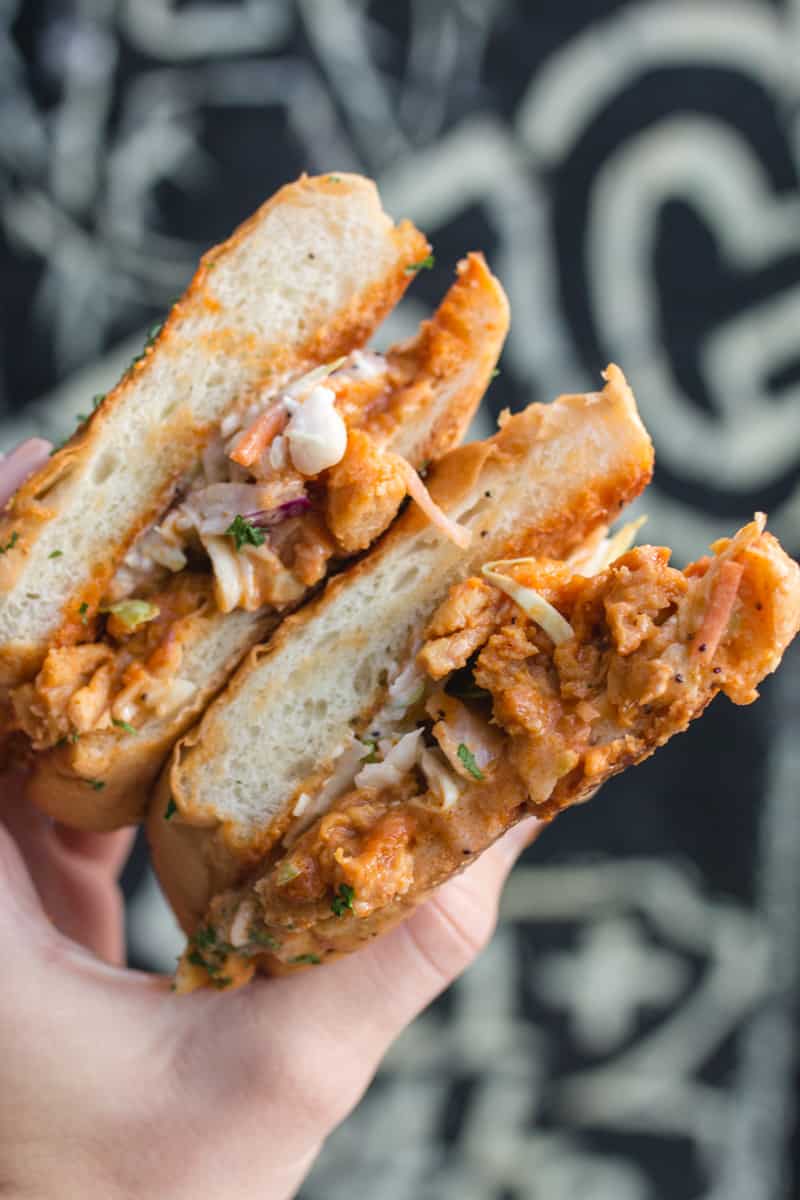 Can vegan food be hardcore? Highline Bar, one of the best vegan restaurants in Seattle, says yes and we absolutely agree. At this tucked-away dive bar in Capitol Hill, you’ll join tattooed and mohawked locals in noshing on incredible, plant-based pub grub and headbanging to live heavy metal. The Highline is known for their sandwiches, and our favorite is the Pig Destroyer: pulled “pork” (soy curls) slow cooked and smothered in Carolina BBQ sauce topped with tangy red onions and creamy house slaw on a toasted hoagie roll. It’s saucy, drippy, messy, and utterly delicious. Not in the mood for a sando? Opt for Satan Fingers, Highline’s seitan strips breaded and fried like chicken fingers and served with ranch, buffalo sauce, carrots, and celery. A couple of pro tips: 1. This grunge-tastic place is a bar, so only people age 21+ are allowed in. 2. You might want to consider wearing something black if you feel like fitting in. But if you want to stand out, we say rock on! 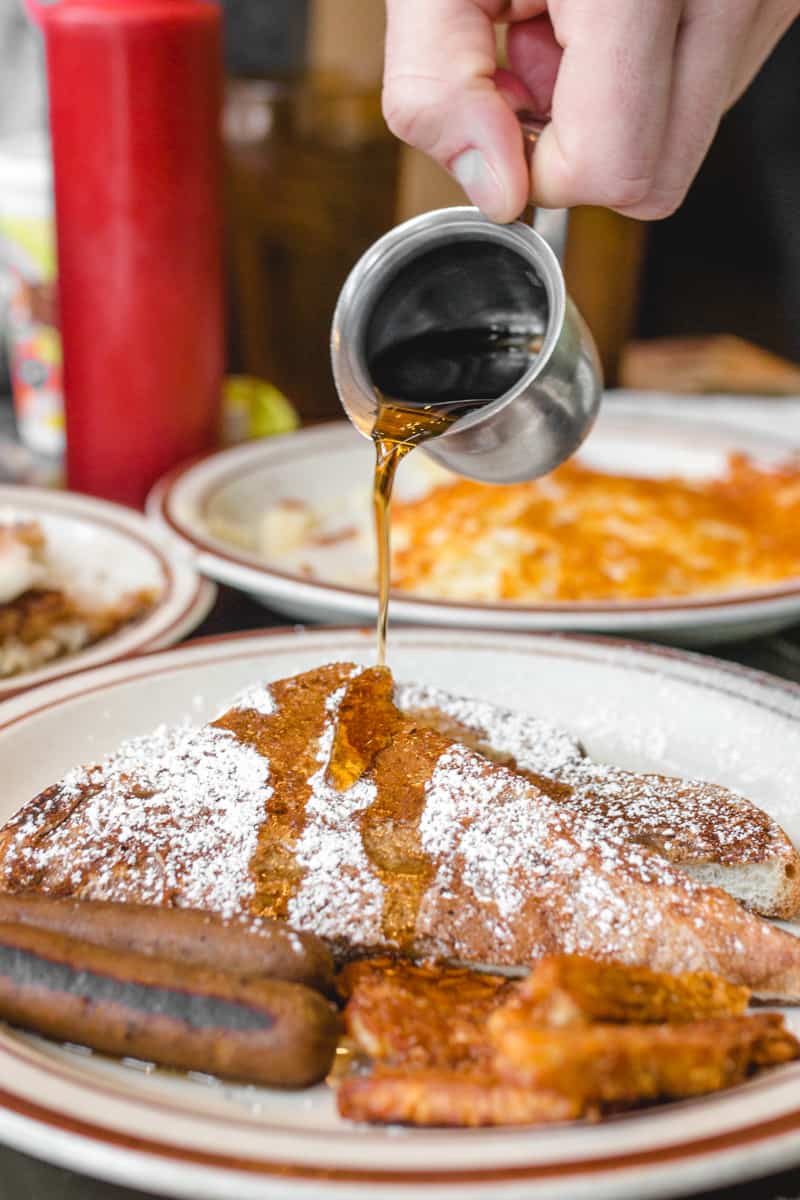 Sometimes you just need a big ol’ plate of vegan comfort food. Fortunately, we know just the place. Wayward Vegan Cafe is a family-owned, plant-based neighborhood diner and one of the top 10 vegan restaurants in Seattle. Everything about this place screams classic American diner, from their large portions and bottomless coffee to their warm and friendly service. Wayward serves their legendary vegan breakfast (which is what you’re here for) all day long, so whether you are an early riser, stumbling out of bed at 2 p.m., or craving a late-night snack, a hot plate of hash browns is only an order away. Everything is great at Wayward Vegan Cafe, but we particularly love their homemade cinnamon rolls and their Griddle Combo with french toast, signature seasoned tofu scramble, sausage links, and tempeh bacon. 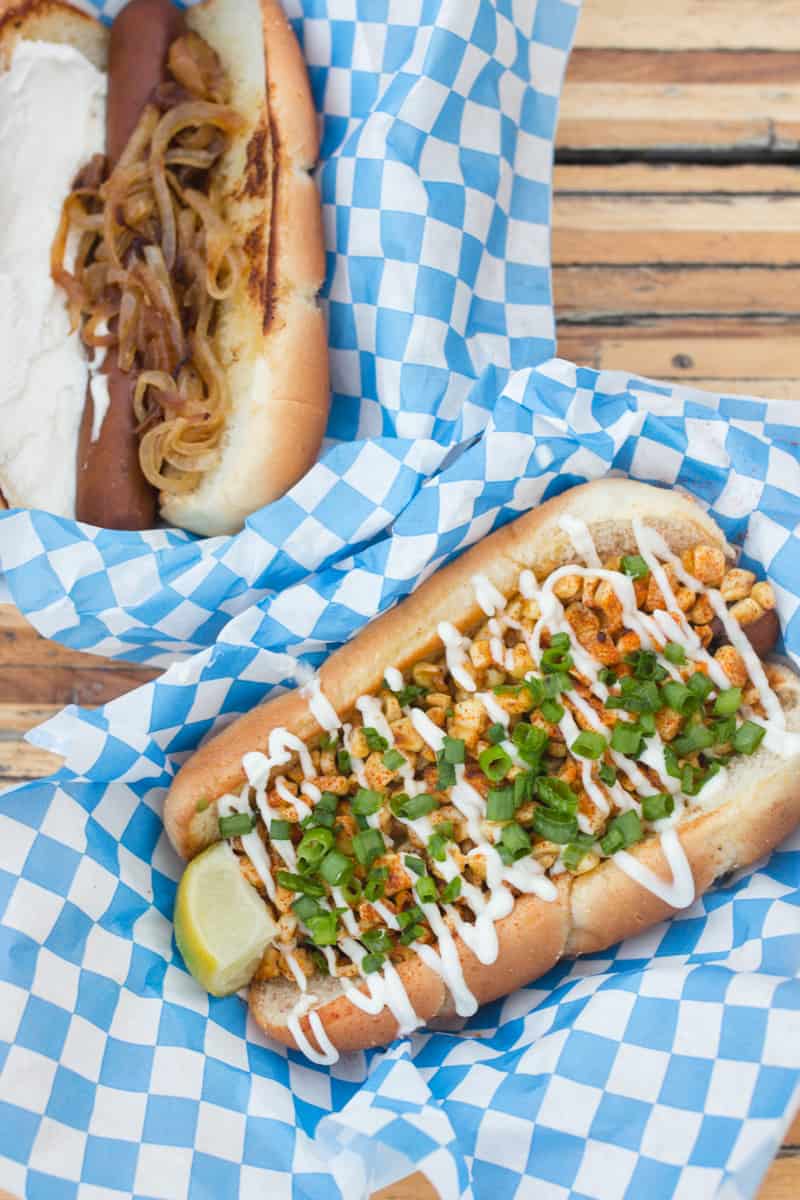 Welcome to your new favorite food truck. Cycle Dogs, the best plant-based hot dog spot in the city and one of the best vegan restaurants in Seattle, is permanently stationed and operating Wednesday-Friday at Peddler Brewing Company in Ballard. The dogs themselves are the perfect texture, full of flavor, and crafted by Field Roast, Seattle’s beloved artisanal meats and cheese purveyor. For classic hot dog lovers who want a step up from a dog and bun (though they do offer that as well), the Seattle Dog is the way to go, slathered with cream cheese and topped with grilled sweet onion. For those a bit more adventurous, we still can’t get over how delicious the Elote Dog is, loaded with buttery Mexican-style street corn, mayo, cayenne, green onion, and a lime wedge. Head to Cycle Dogs for dinner with a group of friends and compete in a game of corn hole between bites. 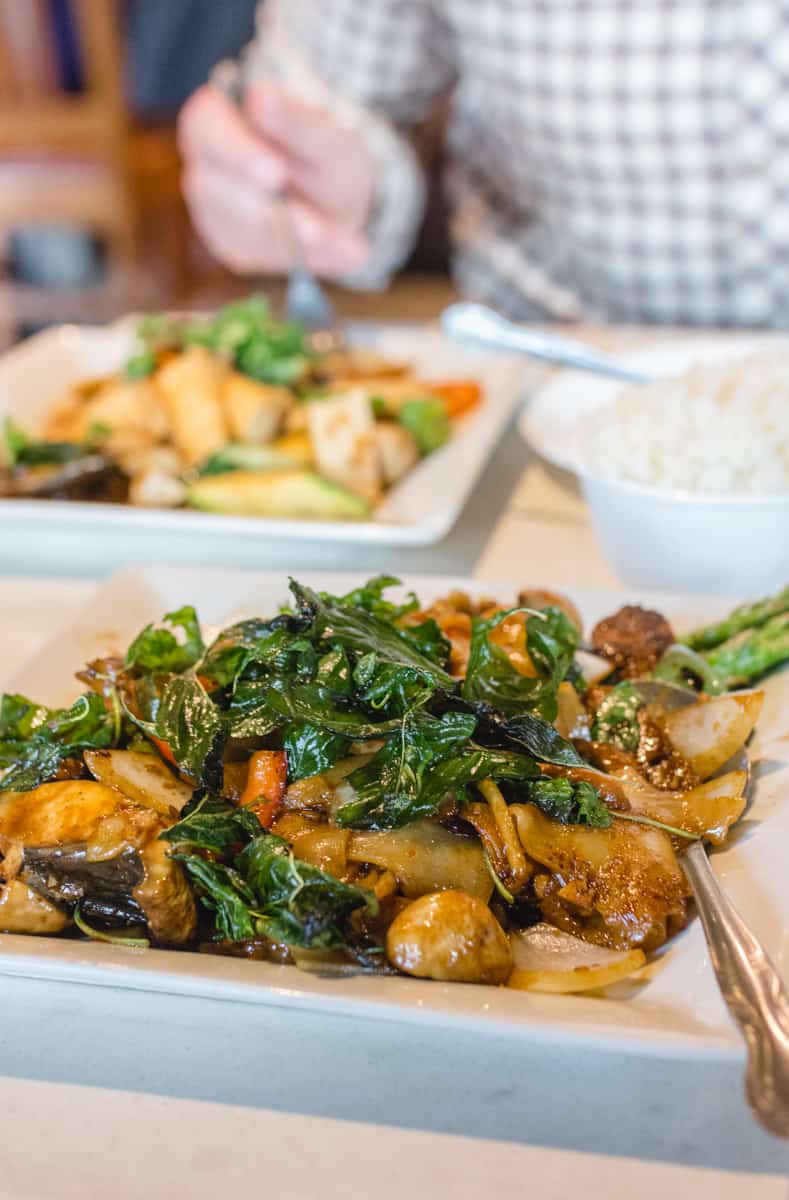 For authentic, crowd-pleasing Thai food made from plants, look no further than Araya’s Place, one of the best vegan restaurants in Seattle and the first of its kind in the entire Pacific Northwest. Their famous all-you-can-eat lunch buffet, available daily from 11:30 a.m.-3 p.m. is the stuff vegan dreams are made of and definitely what you’ll want to feast on when you visit. Pile your plate high with spring rolls, Cashew Delight, Panang Curry, and their signature Drunken Mushroom dish made with wide noodles, seitan, and fresh veggies stir-fried in garlic and chili, then topped with fried basil. Even if you aren’t vegan, you’ll definitely enjoy eating like one here. 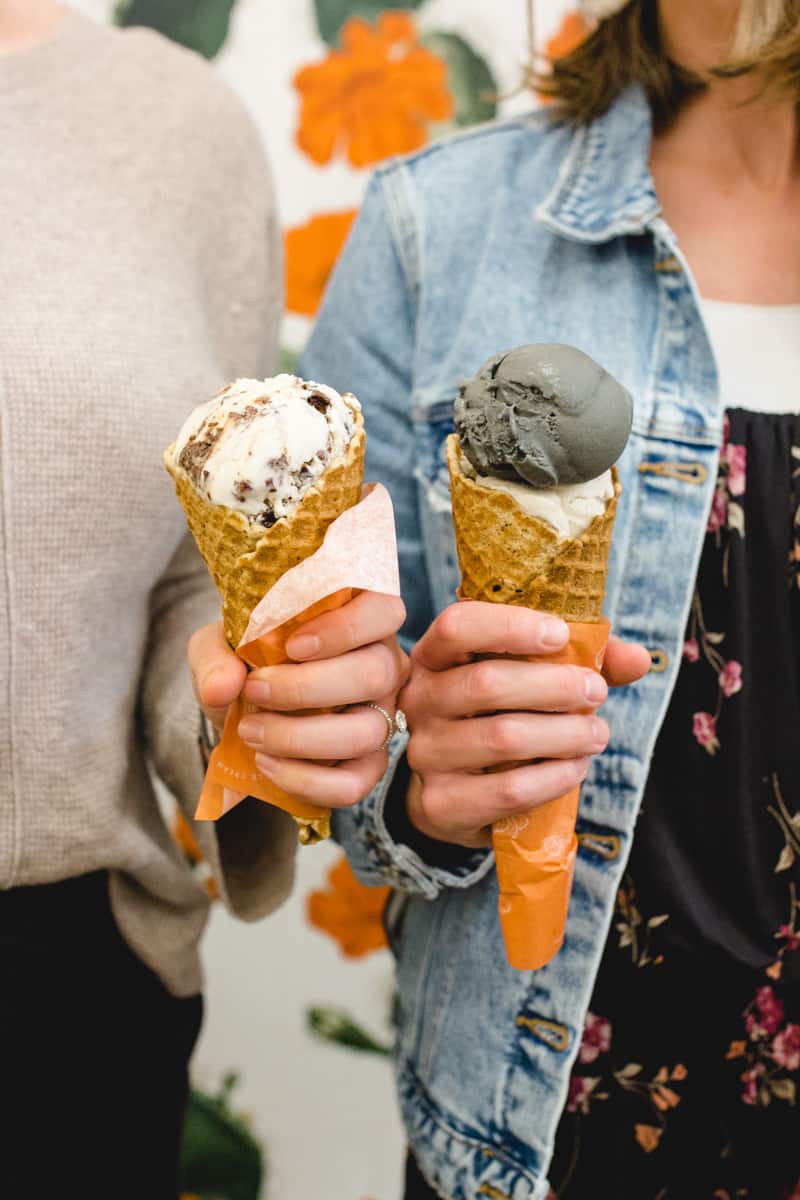 Frankie & Jo’s is here to radically change the way you think about ice cream. As one of our favorite vegan restaurants in Seattle, this adorable scoop shop gives us major SoCal-in-the-70s vibes with its sunshiny ambiance and funky wallpaper. But behind Frankie & Jo’s groovy ice cream counter is where the real dairy-free plant magic happens. That’s where they’re mixing up their 10 incredible mainstay flavors and three monthly flavors showcasing seasonal superfoods. All of Frankie & Jo’s creations are ultra creamy and luscious, but our number one pick has to be their Salty Caramel Ash made with housemade cashew milk, coconut milk, cane sugar, coconut oil, activated charcoal, vanilla extract, and sea salt. The black color of the ice cream comes from the activated charcoal and might look questionable but trust us, it’s undeniably scrumptious (and doesn’t stain your teeth!).  Be sure to get your scoops in one of their gluten-free maple-vanilla waffle cones that are perfectly chewy and made in house daily. Frankie & Jo’s is the perfect spot for a frosty plant-based treat with your girlfriends. 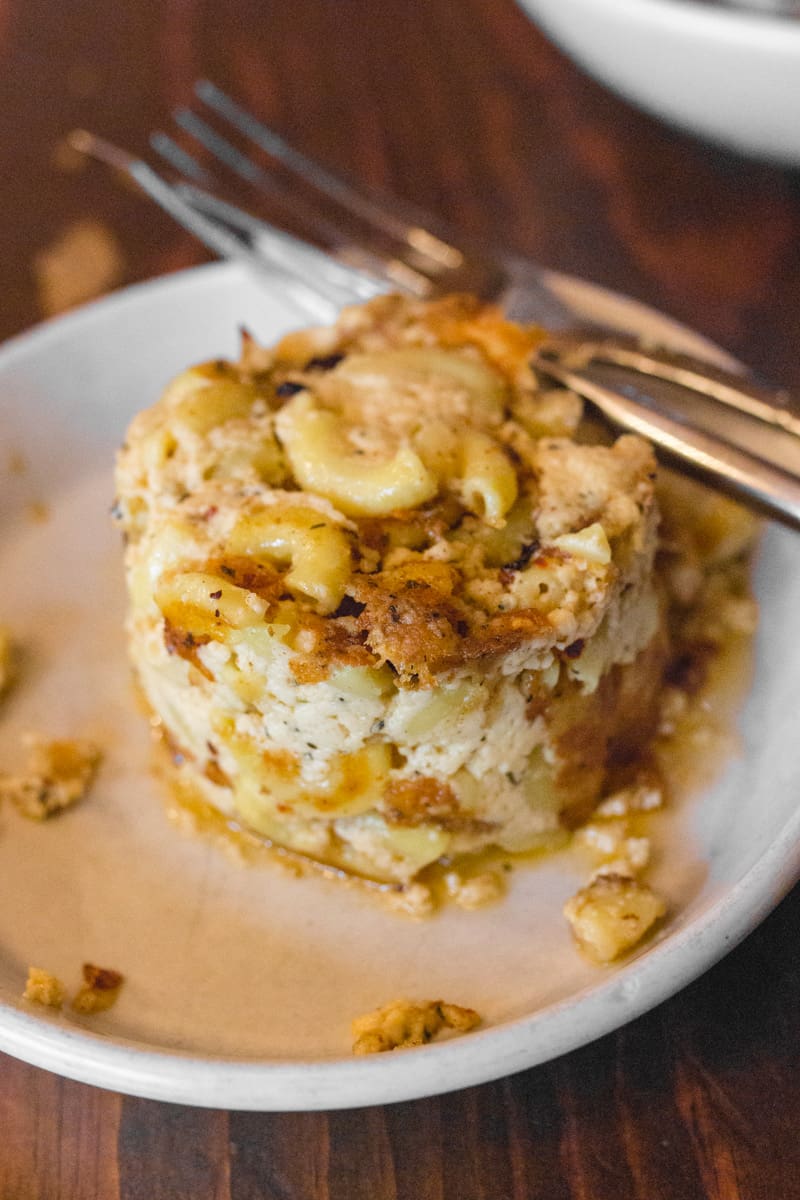 So you’re in search of the best vegan restaurant in Seattle for date night? Head straight to Plum Bistro, an upscale, candle-lit, herbivorous little slice of heaven. Even if the food wasn’t to die for here, you’d enjoy your meal in their intimate dining room that’s moody and romantic when it’s cloudy, but gloriously bathed in light when the sun is out thanks to floor-to-ceiling windows. Plum’s menu features a wide variety of artful, elevated vegan dishes that share a common thread of Cajun-inspired flavors. Their famous Spicy Mac & Yease? YES PLEASE. This marvelous mound of noodles is the best dish here and absolutely has to be on your table. We’ll also be mad at you if you go for Happy Hour and don’t order the Garlic Ginger Cauliflower Bites because WOW. As a non-vegan, it can be hard to find a plant-based restaurant that you want to return to over and over again (because real cheese is just. so. good.) but Plum Bistro is that place. This is vegan food living up to its full potential. 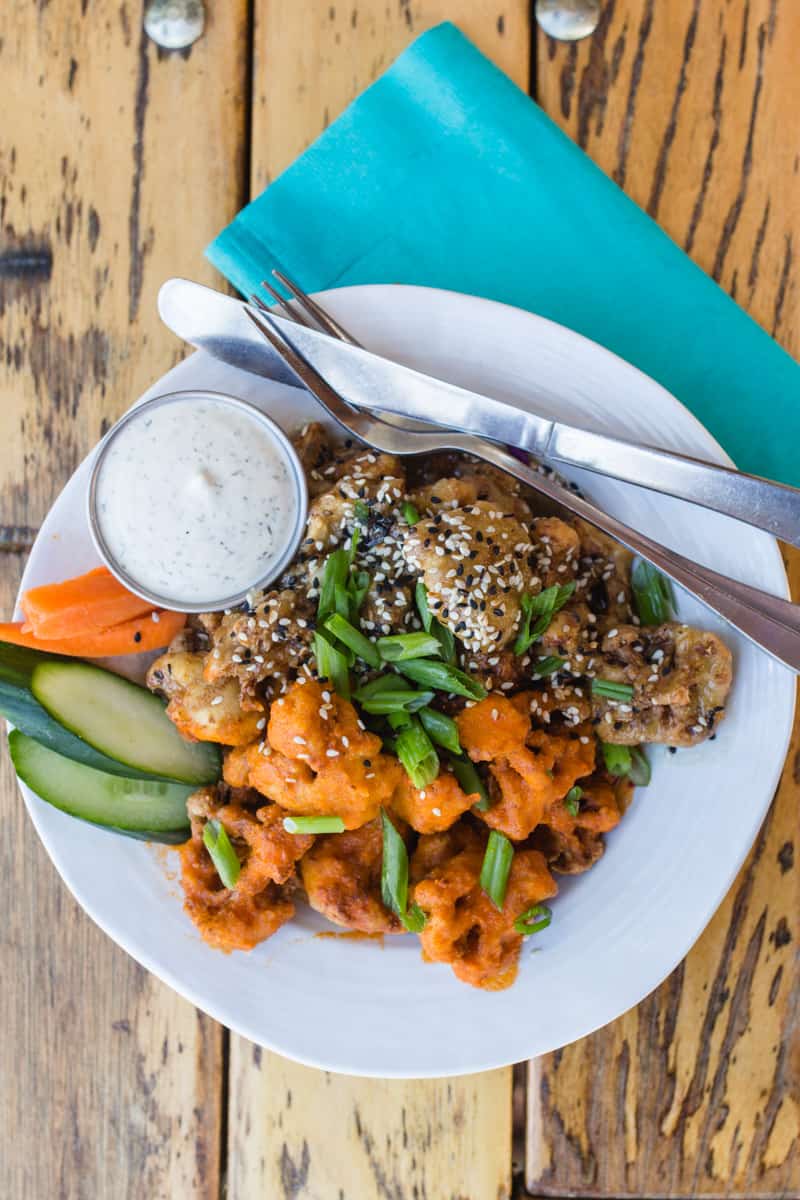 Allow us to introduce you to our favorite vegan restaurant in Seattle: No Bones Beach Club. Forget about that perpetual Seattle drizzle this winter, your plant-based oasis awaits at No Bones, an all-vegan tiki bar that serves up the best meatless food in the city. Between No Bones’ coastal-inspired fare, tropical drinks (complete with tiny umbrellas!), and playful island vibe, you can practically hear waves crashing in the distance. Every single thing we’ve tried here is insanely tasty and creative, but a few menu standouts are: the Buffalo Cauliflower Wings, Jackfruit Flautas, Beer Battered Avocado Tacos, and Northwest Nachos made with housemade tortilla chips and smothered in poblano cashew queso. Plants have truly never tasted SO GOOD.